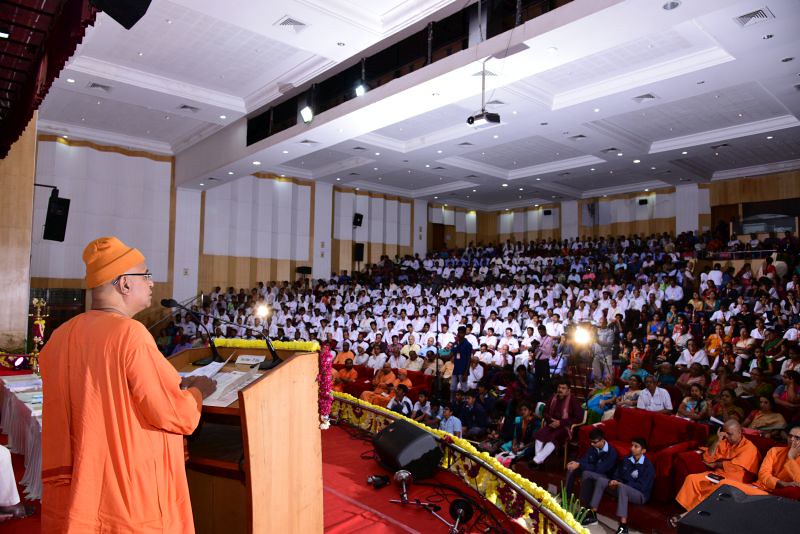 The 125th Anniversary Celebration of Swami Vivekananda’s Addresses at the World’s Parliament of Religions in Chicago, USA:

The year-long celebration which was formally inaugurated at Belur Math, the Headquarters on 11 Sept 2018, had a grand finale with various programmes organized by the Headquarters and the branch centres on 11th September 2019. Major programmes conducted are listed hereunder:

The following special programmes were conducted in 2019-20:

A two-day All India Alumni Meet of Ramakrishna Math and Ramakrishna Mission educational institutions was held at Belur Math.

Lucknow centre held a parliament of religions, a seminar and a youths’ conference.

Mumbai centre held a public meeting at the Gateway of India. The centre also conducted another programme which was attended by the Lokpal of India.

Pune centre conducted a musical play on the life and teachings of Swamiji at two places, in Thane district and Delhi. The play in Delhi was watched by the President of India.

Malaysia centre held a programme consisting of speeches and music at a public hall in Kuala Lumpur.

Phoenix (South Africa) centre held a public meeting and a seminar in Phoenix and Johannesburg.

St.Louis (USA) centre conducted a programme consisting of talks, an audio-visual presentation and singing of bhajans at the Hindu Temple of St. Louis and released a commemorative volume.

A devotees’ convention and a cultural programme were conducted by Bagerhat and Mymensingh centres of Bangladesh.