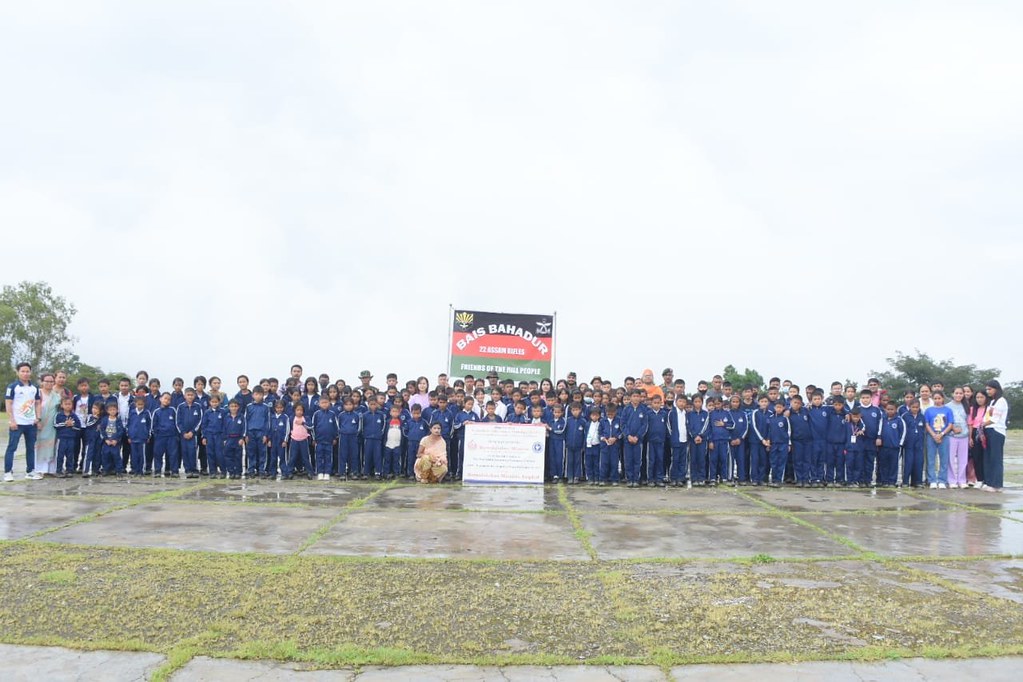 A group of 81 Students and 12 Staff & volunteers visited the temple of Goddess Hiyangthang Lairembi at Hiyangthang, Imphal, and offered their obeisance & prayers to the Mother Goddess on the auspicious Saptami Day of Durga Puja.

The party then travelled to the RKM Gap Unit at Seloi, Upper Charhazare, Kangpokpi Dist., which is 62 km away from Ningthoukhong, and met the students & staff of the unit. On the occasion, the students from all the 3 units were provided with traditional Nepali refreshments.

The Students & Staff of the Seloi GAP Unit then joined their counterparts, from Ningthoukhong, and undertook a joint trip, travelling 53 Kms, to the Headquarters of the 22 Assam Rifles, Jwalamukhi Battalion, Lairouching, Senapati Dist., under the care of Major Chandan Sinha, Motbung Post Commander, 22 Assam Rifles.

Overall 118 Students and 20 staff & volunteers were part of this visit, which was envisaged to bring together our beneficiary students, who belong to 3 communities, namely, Meitei, Nepali & Kuki (tribe), which are very different from each other in many aspects, linguistic, cultural, social, religious, etc,. and to impress on the young minds some idea about the unity of purpose & dedicated life of the personnel of our Armed Forces, who belong to diverse communities. It was also desired that this experience would ignite a spirit of service & sacrifice in them by providing the rare opportunity & honour of spending time in the company of the officers & Jawans inside an Armed Forces camp.

Exceeding all expectations, the campus visit was very well planned & executed by the officers in charge with meticulous arrangements for everything, starting with providing lunch to such a large group of students, providing a Demo of the arms & ammunition used during combats and the basic training undergone by soldiers, arranging for a short tour around such a huge campus, arranging for an inspirational audio-video show, etc.

After spending considerable time touring the campus, having the rare opportunity of the inspiring company of Officers & Jawans of our Armed forces, and thoroughly enjoying their hospitality, the party bid farewell to them with a deep sense of honour, gratitude & respect. Traditional Manipuri mufflers were offered, as a memento of love & gratitude, to some of the officers, who accompanied & guided us throughout the visit.

On their return journey, the GAP units parted after offering their prayers to Maa Durga at Sri Sri Vishnu Panchanan Mandir at Charhazare, Kangpokpi District. The GAP Ningthoukhong Team presented traditional Manipuri Mufflers, as mementoes, to the staff of Seloi GAP Units and took their leave. In the last leg of the journey, the team reached Imphal and visited Sri Sri Govindajee Temple and offered their obeisance & prayers to Shri Shri Govindajee & Mother Durga, whose special worship is performed in the temple complex for 10 days during the Durga Puja. The group then went on to visit the Langbal Keithel, a fun fair cum exhibition, which had been temporarily set up in the nearby grounds. The students heartily enjoyed the leisurely moments, visiting several shops & exhibitions, playing games, etc. after a long & arduous journey on hilly roads.