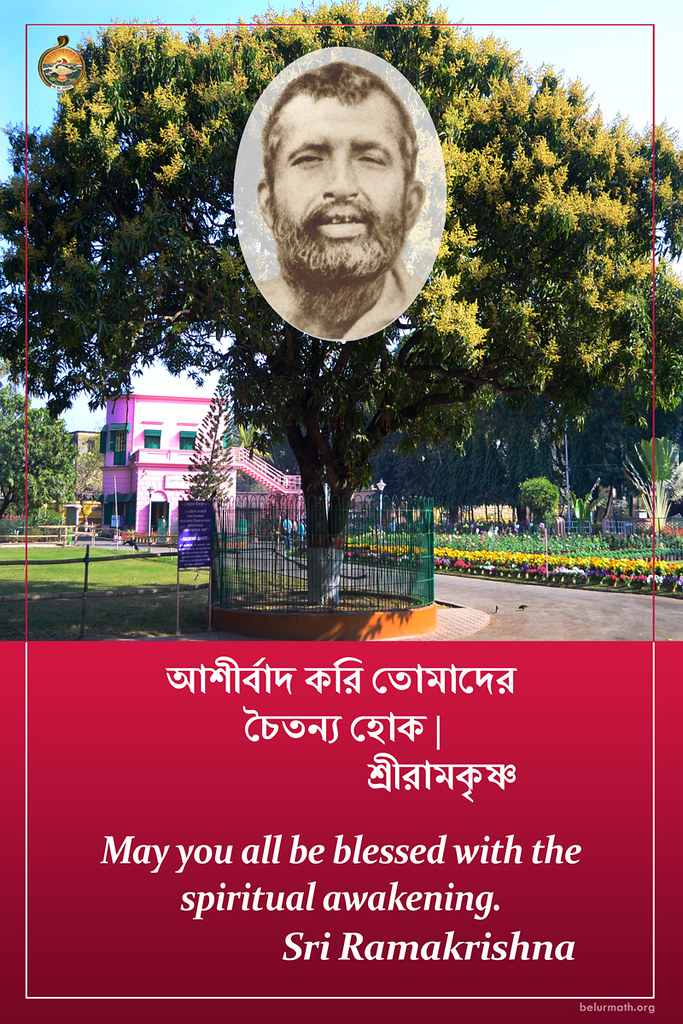 May you all be blessed with the spiritual awakening.

Half of the month of Paush passed away and it was the first day of January 1886.

As the Master felt rather well that day, he expressed a desire to come out of his room and have a walk in the garden for sometime. It was a holiday and the householder devotees came one by one and in groups shortly after midday. Thus when the Master came down­ stairs at three in the afternoon, more than thirty people were engaged in conversation in the garden under the trees, or inside the house. As soon as they saw him, all got up out of reverence and bowed down to him. He came down to the garden path through the western door of the hall on the ground floor and was slowly proceeding southward to the gate when all followed him at a little distance. When he came to the middle of the path leading to the gate, he saw Girish, Ram, Atul and a few others, sitting under the trees to the west of the path. They also saw him and saluted him from there and came joyfully to him.

The Master addressed Girish all of a sudden before anybody had spoken a word and said, “Girish, you, I find, say to one and all everywhere so many things about me (that I am an incarnation of God), what have you seen and understood (about me) that you do so ? “ Girish remained completely unmoved and, kneeling down on the ground near the Master’s feet, said in a choked voice with his hands folded and face turned upwards, ” What more can I say of Him, whose greatness Vyasa and Valmiki could not find words to express?” The Master was charmed at this fervent utterance of the devoted Girish and blessed all the devotees assembled there through their representative, Girish : “What more shall I say to you? May you all be blessed with the spiritual awakening.” Beside himself with love and compas­ sion for the devotees, hardly had he said those few words when he entered into Bhavasamadhi.

Those words of profound blessing, untouched by the slightest tinge of selfishness, directly entered the devotees’ hearts where they raised high billows of bliss. They forgot time and space, forgot the disease of the Master and forgot their previous determination not to touch him till he recovered, and were aware only that out of sympathy for them in their plight, an extraordinary divine Being, feeling excruciating pain at their misery and his heart over­ flowing with compassion, had come down to them from heaven and called them affectionately to Him for giving protection, like a mother sheltering her children against all ills by covering them lovingly with the upper part of her Sari. Then they became eager to bow down to him and take the dust of his feet and, filling the quarters with cries of “Victory to Rama­krishna”, began saluting him one after another. As they were thus bowing down to him the sea of the Master’s compassion transcended all bounds and brought about a wonderful phenomenon.

We had almost daily seen the Master at Dakshineswar losing himself in grace and compassion for certain devotees and blessing them by his extraordinary potent touch in the state of divine semi-consciousness. He began touching each of the devotees assembled on that day in that divine mood. The joy of the devotees, it is superfluous to say, knew no bounds at that act of the Master. They felt that he would not henceforward keep concealed the fact of his divinity either from them or from anybody else in the world ; and knowing, as they did, nevertheless, their own defects, spiritual destitution and incapability, they had not the slightest doubt that all alike, the sinner as well as the afflicted, would find a refuge at his feet, a touch of which dispelled all fear for ever. Unable to utter a single word owing to that wonderful occurrence, some were only looking steadfastly at him as if they were under the spell of a Mantra, some others called aloud to all within the house to come and be blessed by receiving the Master’s grace, and still others collected flowers and worshipped him with them, uttering Mantras. Soon the ecstasy of the Master came to an end and the devotees too were again in the normal state of their consciousness. Bring­ ing thus to an end his walk in the garden that day, he went into the house and sat down in his room.