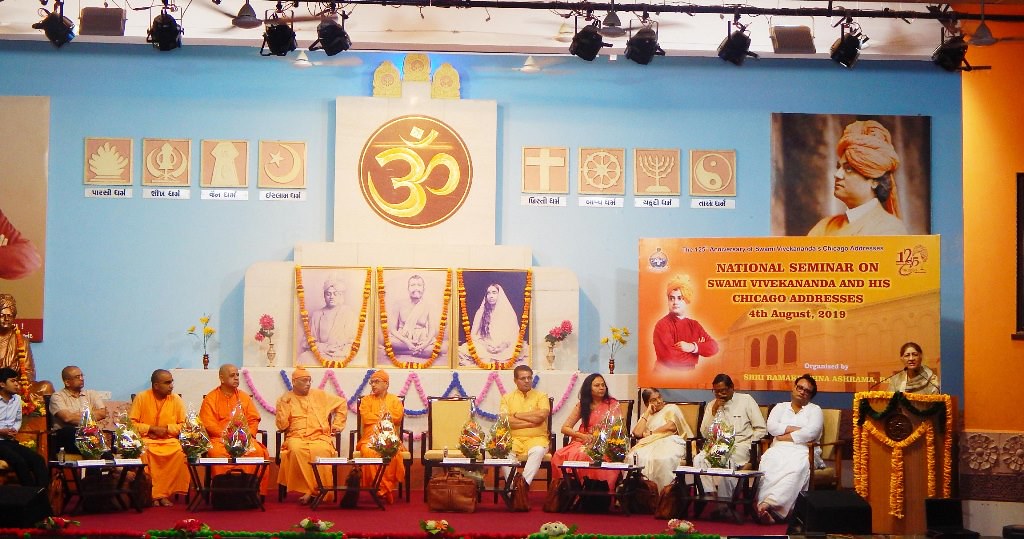 ( In commemoration of 125th Anniversary of Swami Vivekananda’s Chicago Addresses)

In total, the participation was about 700, which included delegates from all over Gujarat and other states like Rajashthan, Maharashtra, etc.

The Seminar started with Vedic Invocation by sannyasins and Brahmacharis of the Ramakrishna Order followed by the lighting of the lamp.

Swami Nikhileswaranada, Adhyaksha, Shri Ramakrishna Ashrama, Rajkot welcomed all present in the Seminar and introduced the speakers to the delegates. He also read out the message sent by Shri Narendra Modi, Hon. Prime Minister of India for the occasion.

Rajmata of Baroda Her Highness Shubhanginiraje Gaekwad, Chancellor of the Maharaja Sayajirao University of Baroda graced the occasion as the Chief Guest. She said that the message delivered by Swami Vivekananda at the World’s Parliament of Religions in 1893 is still very relevant today after 125 years because even today violence in the name of Religion is continuing. Dr. Nitinkumar Pethani, Vice-Chancellor, Saurashtra University also delivered his speech in the inaugural session.

There was a lunch break followed by an audio-visual session in which clippings associated with the Parliament of Religions from the acclaimed film ‘Vivekananda on Vivekananda’ ( In Hindi) was shown to the delegates.

The next session started with a devotional song. It had four eminent speakers who shared their views on various aspects of Swami Vivekananda’s Chicago Addresses. Shri Sharad Sagar, Indian Youth Icon, Founder and CEO of Dexterity Global spoke in Hindi on Swami Vivekananda – a Global Leader for Global Civilization; Dr. Jayesh Shah, Ambassador, the Parliament of World’s Religions, Vadodara spoke in Gujarati on the History of the World’s Parliament of Religions; Shri Vinayak Lohani, Founder of ‘PARIVAR’, a humanitarian institution spoke in Hindi on The legacy of Swami Vivekananda; and Ms. Jyotiben Thanki, popular Gujarati writer and former advisor of Children’s University, Gandhinagar spoke in Gujarati on Swami Vivekananda in Chicago – Divine Plan.

The concluding session followed after a short tea break. It started with a chorus song on Swami Vivekananda led by Swami Vedanishthananda. Few of the participants shared their feedback. Swami Nikhileswarananda gave the concluding remarks. Vote of thanks was given by Swami Prabhusevananda.

All the delegates were given, as a gift, a bag sponsored by ONGC, Surat. The Ashram also gifted a folder and various English and Gujarati book on and by Swami Vivekananda to the delegates. Certificates of participation were given to all the participants.

The whole program was broadcast live stream and can be watched even now on YouTube; the link is https://www.youtube.com/watch?v=w5RLjPSkb3A