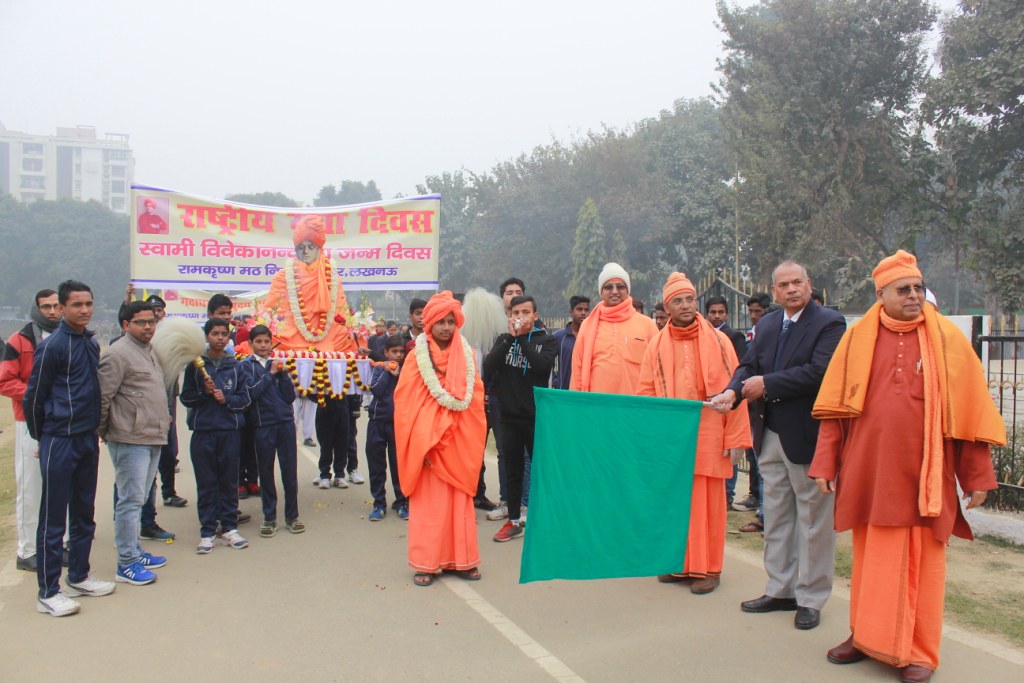 On the occasion of National Youth Day, a series of programme were held at Ramakrishna Math, Nirala Nagar, Lucknow, on 12 January 2018, as per details given below:

1. The day started with Rogi Narayan Seva – Worship of God in patients admitted at Vivekananda Polyclinic & Institute of Medical Sciences, Lucknow with distribution of fruit and biscuits by Bharat VikashParishad, Lucknow.

A special youth programme was also organized at Ramakishna Math, Lucknow. The programme started with Lighting of Lamp amidst Vedic Chanting.Swadesh Mantra and Amrit Mantra in chorus was recited by the youthwhile the welcome address was given by Swami Nirvikalpananda, Ramakrishna MissionSevashrama, Kankhal besides shorts speeches and recitations were presented by the selected youth participants.

Prof. Vikram Singh, the Chief Guest addressed the audience on the ‘Significance of National Youth Day’.He said that the assembled youth are indeed fortunate to be able to participate in this august gathering and receive the blessings of Swamiji on his holy birthday. The Presidential Address was delivered by Swami Muktinathananda, Adhyaksha, Ramakrishna Math,Lucknow who said the youth must have self-confidence, physical strength, mental concentration and an attitude of service to others in order to become successful in life.

Sri Samar Nath Nigam, Vivekananda Yuva Sangha, Lucknowpresented Vote of thanks. The programme ended with the Closing Hymn on Swami Vivekananda followed by National Anthem and distribution of holistic literature and food packets to all present.

3. In the afternoon, another Youth Programme was organized at Ramakrishna Math in collaboration with Bharat VikashParishadLucknow. The programme started with lamp lighting and presentation of national song BandeMatram by Ms. Suman Srivastava. Sri Madan Lal Agarwal, State President, Bharat VikashParishadwelcomed the participants and introduced the dignitaries on the dias. Sri Hira Singh delivered a talk on Swami Vivekanandaji while the children delivered short speeches besides a short play on Swamiji.

Swami Muktinanthananda, Adhyaksha Ramakrishna Math, Lucknow,delivered the key note address and said, according to Swamiji, the youth is determined not by physical age but by mental attitude of serving others. Smt. Sanyukta Bhatia, Mayor, Lucknow the Chief Guest also addressed the gathering and said that her top priority is to make Lucknow a clean city free from traffic jam.

The vote of thanks was presented by Sri Rajesh Malhotra, State Secretary, BharatVikasParishad. The programme ended with rendition of National anthem and distribution of sweets.

4. In the evening, a cultural programme of ‘Classical Vocal Music (Dhrupad Recital)’ by Pandit Vinod Kumar Dwivedi and his son Sri AyushDwivedi of Kanpur was arranged in Pakhawaj accompaniment by Pandit Dr. Raj Khushiram of BhatkhandeSangeetSansthan, Lucknowand Sarengi by Sri MaheswarDayal Nagar, Lucnow which enthralled the audience.