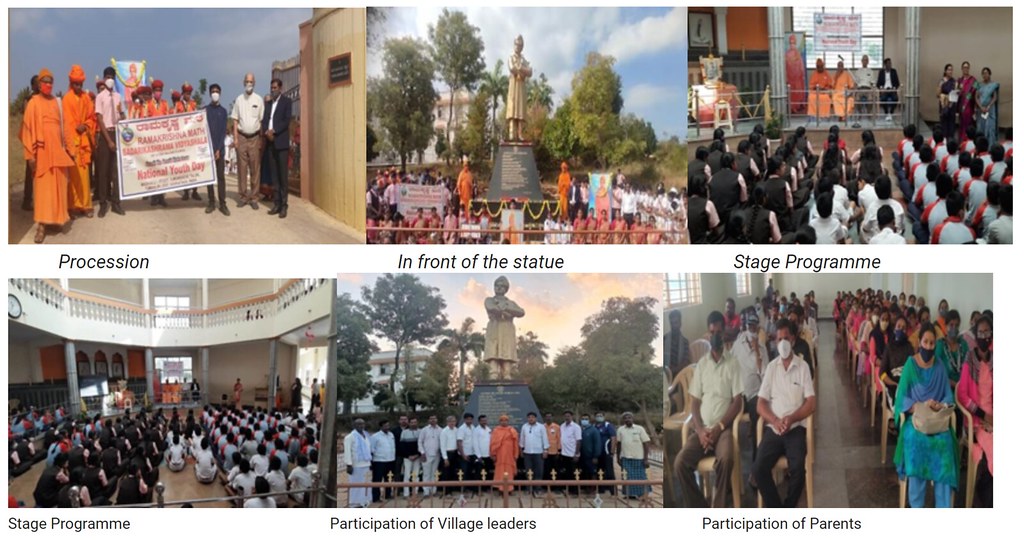 Ramakrishna Math, Madihalli, celebrated the National Youth Day and Azadi ka Amrit Mahotsav on 12 January 2022 in the Badarikashrama Vidyashala campus of the ashrama. The programme was started by the assembly of students in the courtyard in front of Badarikashrama Vidyashala. A procession started in the morning by holding Swami Vivekananda’s flex with the slogans. The procession proceeded around the premises repeating the slogans of Swami Vivekananda. It reached Swami Vivekananda’s statue in the garden. Student Ms. Nisarga read the sayings of Swami Vivekananda. Swami Bodhaswarupananda, Adhyaksha of the ashrama, the Chief Guest Dr. T.G.K Murthy from ISRO, Principal Mr. Srinivasa M, selected students and staff members offered flowers to the statue. Then the procession proceeded to the school.

The stage programme was held for one and half hour. After the opening prayer by Smt. Shylaja, Music Teacher, Smt. Leela welcomed the gathering. The programme was compered by Teacher Hemalatha. There was three group songs sung by Teachers, 8th Std. and 10th Std students intermittently.

Adhyaksha Swami Bodhaswarupananda addressed the gathering and said ‘Swami Vivekananda filled the spirit in the youth’s mind by his inspiring words and which motivated to build a model society.’ And also he advised the teachers to encourage the students to read Swami Vivekananda.

Dr. T.G.K. Murthy was impressed by the students’ discipline which they have shown in the formation of Indian Map and also, he threw a light on the famous sayings of Swami Vivekananda which is carved on the headstock. “Never mind failures; they are the beauty of life,.“ Swami Punyavratananda Maharaj blessed the students in his ashirvachan.

The activities were held for the students such as Essay Competition, Recitation, Drawing, Patriotic Song on the occasion of this special event.

In the afternoon, there was a small programme held for Village youth leaders.

In continuation to this event, there was parents’ meet on 13th Janaury 2022 and about 200 parents took active participation.