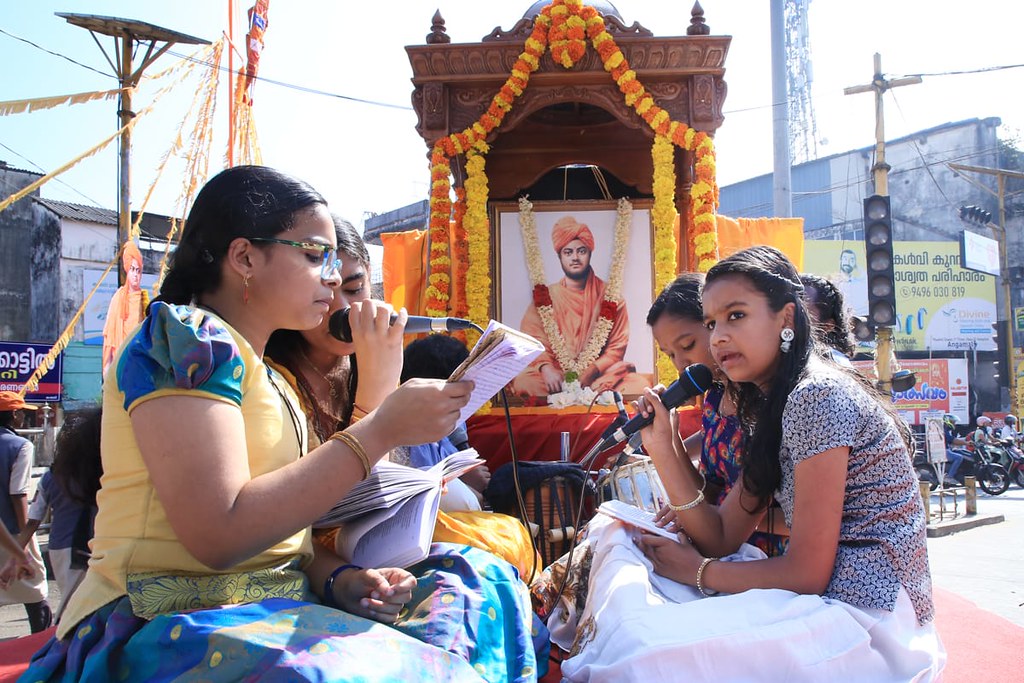 Sri Ramakrishna Advaita Ashram, Kalady celebrated the 125th Anniversary of The Foundation Day of Ramakrishna Mission & National Youth Day 2022 in a befitting manner with the participation of youth from neighbouring schools, colleges and Universities.

Literary competitions were organized for the youth on  4 and 5 January 2023 on the Ashram premises. The competitions included elocution, recitation, and essay writing based on Swamiji’s Teachings and messages to the youth.

A procession was organized on 12 January 2023 which covered 2-3 kilometres in and around the Kalady Township, touched the important religious and historical places of Kalady with the active participation of school and college-going students, Teachers with the devotees of Sri Ramakrishna and the general public. The participants carried placards of inspiring quotations of Swami Vivekananda and proclaimed the slogans of Swamiji’s call to the youth.

The procession was also accompanied by Pancha Vadyam, a Band display of NCC cadets of Brahmanandodayam Higher Secondary school, Kalady in which about 2000 people were present.

After the procession, a public meeting was conducted in the Swami Agamananda outdoor auditorium of Brahmanandodayam Higher Secondary School, Kalady. The meeting started with an invocation. Swami Srividyanandaji, Adhyaksha, and Kalady presided over the meeting.

Dr. V P Joy IAS, Chief Secretary, Govt. of Kerala was the chief guest. He inaugurated the youth conference and gave away books, prizes & cash awards to the students who won various competitions. In his address, the chief Secretary appreciated the various activities of the Ramakrishna Mission in general and the Kalady centre in particular. He praised the great contribution of Swami Agamananda for the development of Ashrama as well as Kalady in general and wonderful social reform work, particularly for the Harijan upliftment.