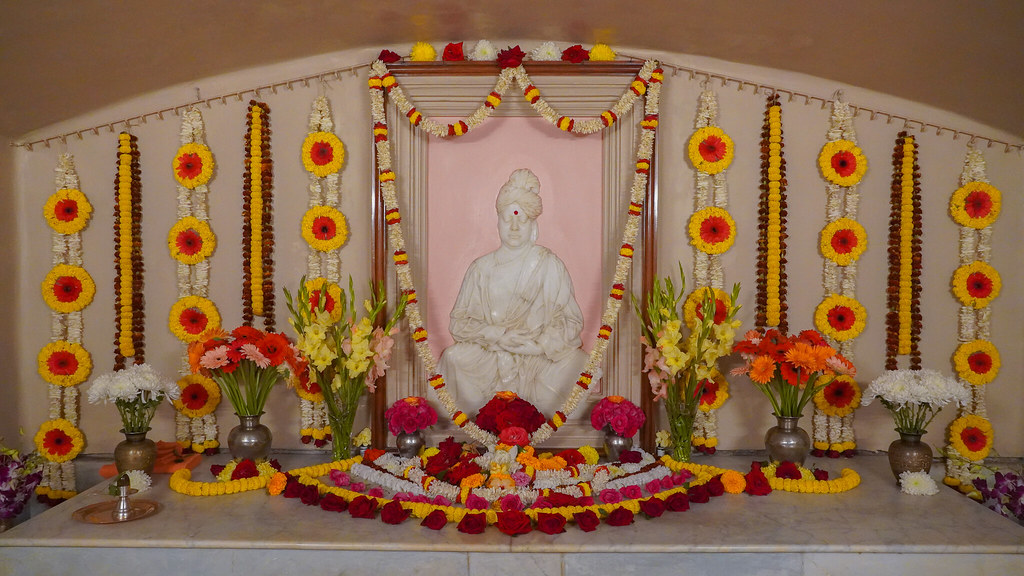 Swami Gautamananda ji will be visiting Kalady and Kochi from 15 to 20 February, and Mysuru and Madihalli from 21 to 28 February.

Belur Math was closed to devotees and visitors on and from 1 January on account of the third wave of the Covid-19 pandemic in India. 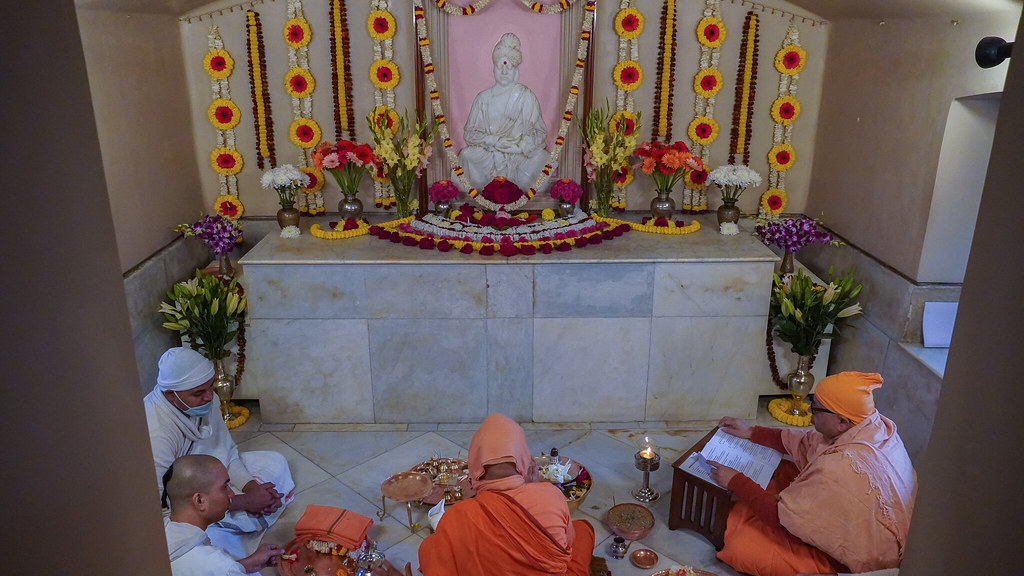 The birthday (janma-tithi) of Swami Vivekananda was celebrated at Belur Math on Tuesday, 25 January, with special worship, homa, devotional songs and music.  Swami Jyotirupanandaji presided over the meeting held in the afternoon.  Devotees watched the day’s programmes online. 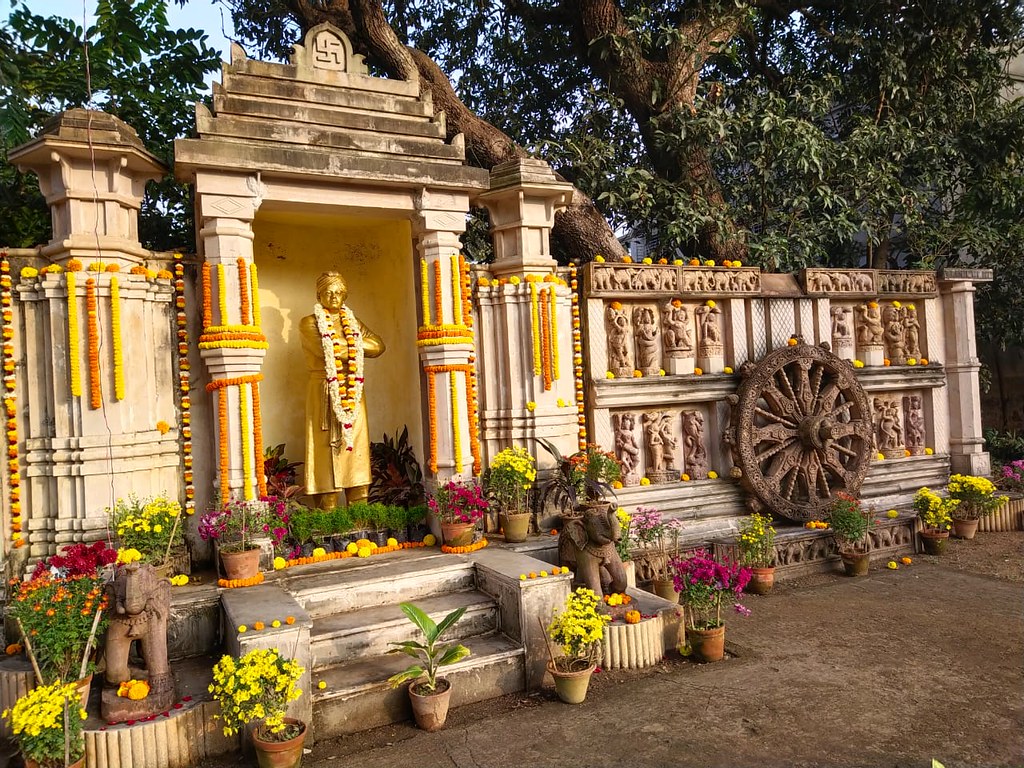 The National Youth Day (12 January, the birthday of Swami Vivekananda) was observed this year with special fervour, as the Government of India made it a part of its nationwide Azadi Ka Amrit Mahotsav (Celebration to commemorate the 75th year of India’s Independence).  The Government of India took many initiatives to celebrate the occasion and requested the headquarters to observe it on a grand scale.  The headquarters, in turn, instructed all our centres in India to hold special programmes on that day.  It is a matter of joy that almost all our centres in India did their best in paying their tributes to Swamiji on his birthday, despite the raging third wave of the pandemic.  Most centres held public meetings on appropriate subjects in online mode.  Temples and other important structures were decoratively illumined at Belur Math and many branch centres.

The headquarters in collaboration with Saradapitha held a colourful programme comprising speeches and songs at Saradapitha.  The highlight of the event was a dance performance showcasing the spirit of Indian martial arts by a troupe of 100 artists from the Eastern Zonal Cultural Centre, Ministry of Culture, Government of India.  On account of the pandemic, the programme was held before a limited audience and was live-streamed over the Belur Math YouTube channel.

Our centre located at Swamiji’s Ancestral House in Kolkata conducted a week-long programme from 12 to 18 January.  Discourses, devotional songs, classical vocal and instrumental music, dance, sitar recital and four seminars focussing on Swamiji’s impact on the Indian freedom movement and his versatile genius were held.  Mamata Banerjee, Chief Minister of West Bengal; Sri Suvendu Adhikari, Leader of the Opposition, West Bengal, and many other dignitaries visited the centre and paid floral tributes to Swamiji on 12 January.

The Government of West Bengal celebrated National Youth Week from 12 to 18 January by holding Vivek Melas (fairs) at several places in the state in collaboration with the Math and Mission.

Following a directive from the Government of India to the Indian embassies and consulates abroad, the occasion was celebrated in at least thirty countries including Bangladesh, Canada, Fiji, Ireland, Nepal and the USA with the active participation of our centres wherever possible.

In collaboration with the Government of India, the Math and Mission will continue to celebrate Azadi Ka Amrit Mahotsav, with special reference to Swamiji, till the next Independence Day (15 August 2022).  Some of the important activities/events planned are given below:

At Vadodara centre, Swami Atmasthananda Bhavan (with a dispensary and living quarters) and the renovated prayer hall were inaugurated on 7 and 8 January respectively.  Swami Gautamanandaji addressed the inaugural programmes through recorded videos.

On the occasion of the Gangasagar Mela, Manasadwip centre provided board and lodging to 246 pilgrims at its unit on the Mela grounds from 12 to 16 January.  The centre also took part in the religious programmes arranged by the local administration.

The Telegraph Education Foundation, Kolkata, presented the Award for Excellence in Academics to Narendrapur Vidyalaya.

Two students of our Kozhikode school secured the second and third prizes in the Hindi Olympiad Examination.  Another student received the second prize in a classical dance competition held in Bengaluru in December.  A class-11 student of the school was selected for the under-16 Kerala cricket team.

Delhi centre conducted ten online workshops on values education from 28 October to 17 December and one workshop (in offline mode) at Neyveli, Tamil Nadu, on 5 & 6 January.  In all, 536 teachers from different parts of India participated in these workshops.  The centre held a youths’ convention on 29 January in online mode in which 225 youths took part.

Ranchi Morabadi Ashrama conducted a three-day personality development camp from 27 to 29 December in which 28 girl students and 13 teachers took part.

The following centres provided medical care to poor patients through medical camps.  A summary of the services provided by them is given below.

Aalo: A medical camp at a remote village named Taba Sora on 5 January in which 45 patients were treated.

Delhi: Eye operations for 60 patients and distribution of spectacles to 20 patients from October to December.

Jamshedpur: Two eye camps on 17 and 30 December in which 145 patients were treated and 57 were operated on for cataract.

Kamarpukur: 293 eye patients were checked, 54 were operated on and 78 were given spectacles in January.

Khetri: 60 eye patients were screened and 23 were operated on in January.

Medinipur: A medical camp at a place in Kespur block in Paschim Medinipur district on 24 December in which 857 patients were treated.

Nagpur: An eye camp on 19 December in which 158 patients were treated, 26 were operated on for cataract, and 115 spectacles were distributed.

Naora: Two eye camps on 3 and 22 January in which a total of 87 patients were treated.

Ranchi Morabadi: Eye camps in November, December and January in which a total of 1207 patients were checked, 53 were operated on, and 38 spectacles were distributed.

Salem: An eye camp on 2 January: 200 patients were checked, and subsequently 58 were operated on and 53 were given spectacles.

Thanjavur: A health awareness programme on 1 January which was attended by 35 people.

Vadodara: Three eye camps in December and January in three villages of Chhota Udepur district, Gujarat, in which a total of 561 patients were treated and 105 were operated on for cataract.

We record with sorrow the passing away of three of our brother monks. Swami Devatattwananda (Nanigopal) passed away in his room at Sarisha centre on the morning of 5 January.  He was 48.  An initiated disciple of Swami Gahananandaji Maharaj, he joined the order at Belur Math in 1999 and received sannyasa diksha from Swami Atmasthanandaji Maharaj in 2009.  He served at Belur Math (in dispensary) and at our centres in Malda, Jamtara, Narainpur, Baranagar (Math), Bamunmura and Sarisha, and participated in the cyclone relief operations in Odisha in 2000.  May his soul rest in peace! Swami Girishwarananda ji (Barin Maharaj of Belur Math) expired at Seva Pratishthan, Kolkata, on 24 January at 8.35 pm.  He was 78 and had been suffering from diabetes, hypertension and kidney disease.  Initiated by Swami Vireshwaranandaji Maharaj, he joined the order in 1968 at Ranchi Morabadi centre and received sannyasa diksha from his guru in 1978.  He served the order at Belur Math (in dairy and headquarters office) and at Ranchi Morabadi, Saradapitha, Seva Pratishthan, Ranchi Sanatorium and Jayrambati centres.  He had been living a retired life at Belur Math for the last five years.  The swami was austere and amiable by nature.

Swami Bhaveshwarananda ji (Ajit Maharaj of Kamarpukur centre) breathed his last at Seva Pratishthan, Kolkata, on 28 January at 12.15 pm.  He was 92 and had been suffering from diabetes and hypertension for several years.  He was admitted to Seva Pratishthan in December for the treatment of chest infection and later tested positive for Covid-19.  An initiated disciple of Swami Virajanandaji Maharaj, he joined the order in 1953 at Vrindaban centre and received sannyasa diksha from Swami Madhavanandaji Maharaj in 1964.  He served the order at Vrindaban Sevashrama, Rahara Boys’ Home, Advaita Ashrama (Kolkata), Ranchi Morabadi Ashrama, Seva Pratishthan (Kolkata) and Varanasi Advaita Ashrama as an assistant and Chandipur and Shyamla Tal centres as the head.  He had been living a retired life at Kamarpukur centre for the last thirteen years.  The swami was hardworking, simple and sociable by nature.