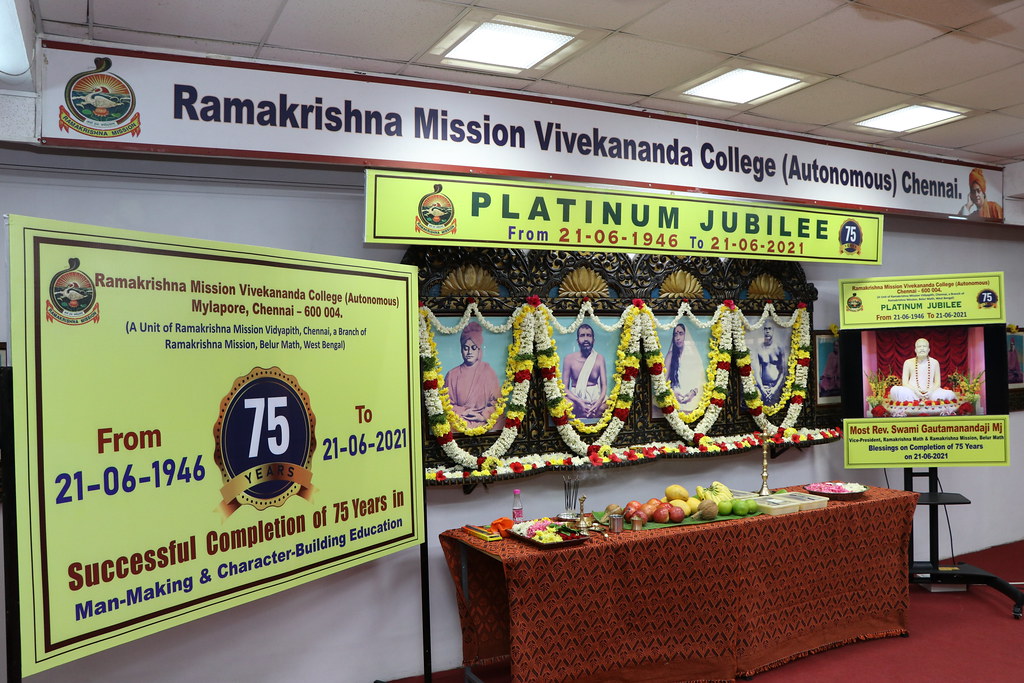 Websites: The following centres have changed their website addresses: 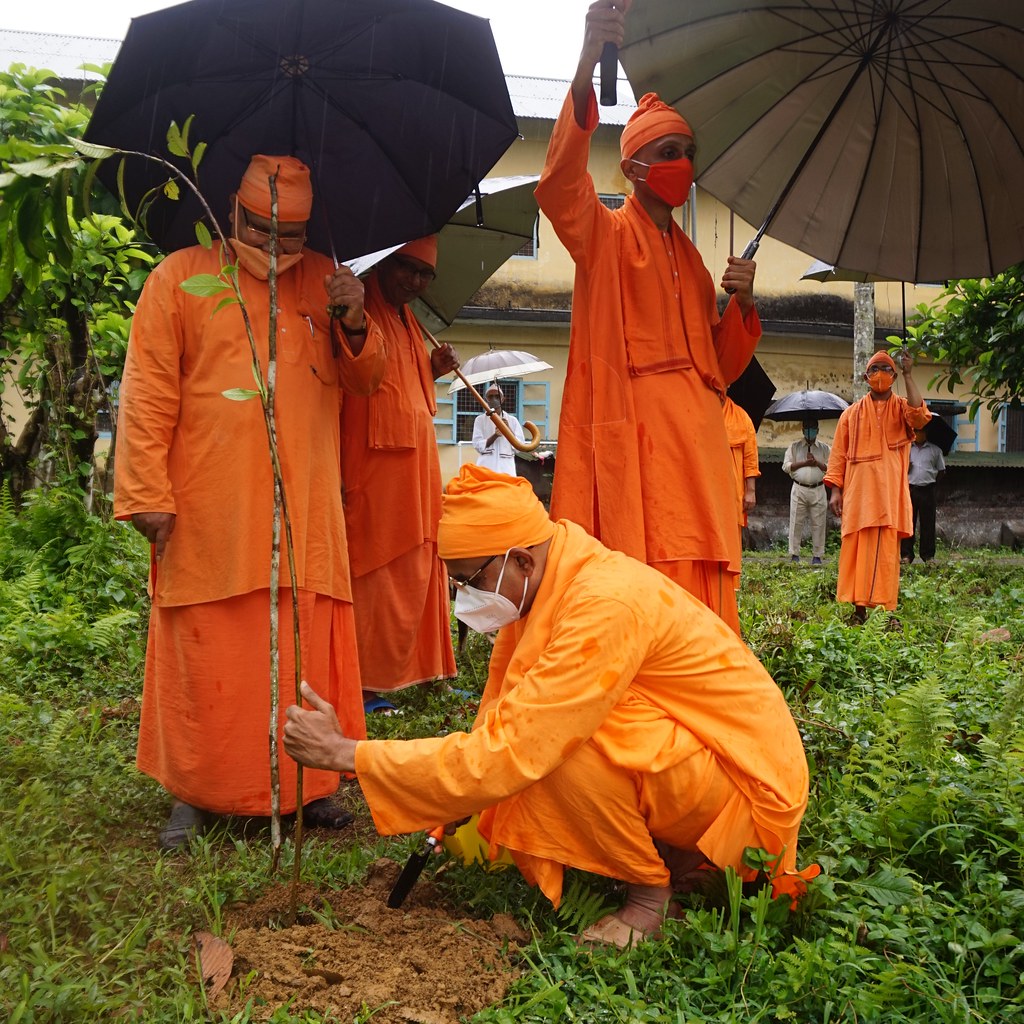 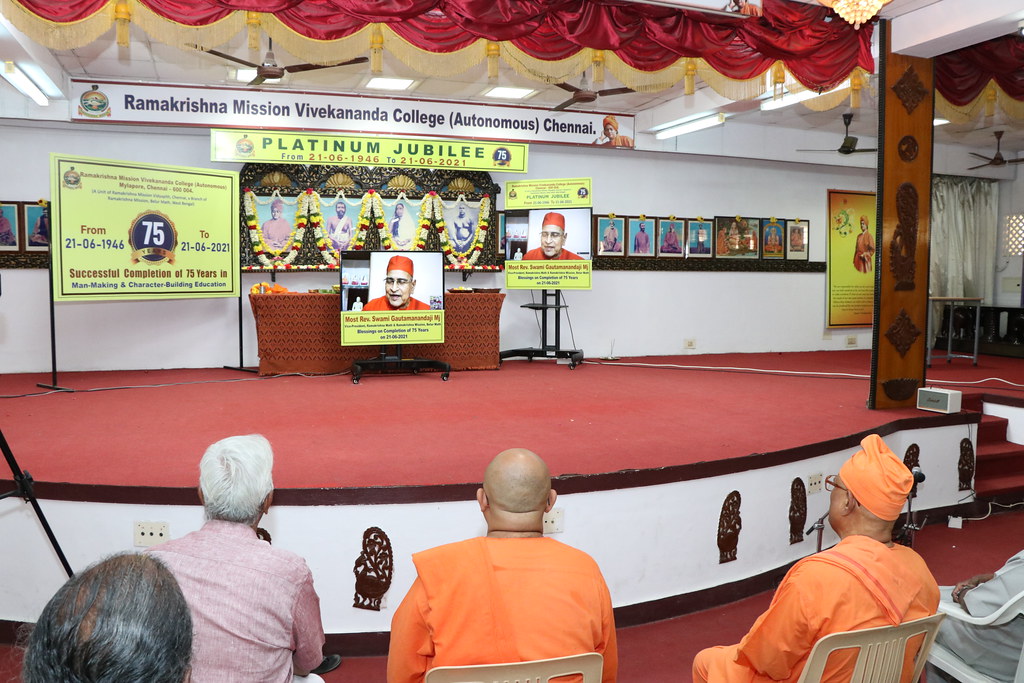 Rajkot Ashrama launched a mobile phone app named Vivekananda Book World on 21 June for promoting its Gujarati publications. The General Secretary had sent a video message for the occasion.

Ranchi Morabadi centre observed the International Yoga Day on 21 June by holding an online event.  Smt Droupadi Murmu, Governor of Jharkhand, and others addressed the audience.

Four students of Narainpur school secured Swami Atmananda Medhavi Chhatra Protsahan Yojana awards for their outstanding performance in Class 10 and Class 12 exams in the academic years 2018-19 and 2019-20.  Sri Bhupesh Baghel, Chief Minister of Chhattisgarh, presented the awards through videoconferencing.  Each student received a citation and a sum of 1.50 lakh rupees.

A team of five students of Class 10 of our Aalo school emerged as one of the national level winners in the Toycathon 2021, a contest held by the Innovation Cell under the Union Ministry of Education, for encouraging the development of innovative toys and games.

The results obtained by the Class 10 students of our Bhubaneswar and Narainpur schools are given below.  The respective State Boards cancelled Class 10 examinations this year on account of the pandemic; results were declared based on the assignments submitted by students.

Delhi centre conducted 16 online workshops on values education from 27 May to 26 June.  In all, 11,666 teachers, students and parents attended these programmes.

We record with sorrow the passing away of six of our brother monks. Swami Shivamayanandaji (Ranen Maharaj), a Vice-President of the Ramakrishna Math and Ramakrishna Mission, breathed his last at Seva Pratishthan, Kolkata, on 11 June at 9.05 pm, due to severe Covid pneumonia.  He was 86 and had been suffering from hypertension, bronchial asthma and kidney disease for some years.

Revered Maharaj was admitted to Seva Pratishthan on 22 May with Covid symptoms and was kept under the care of a team of specialist doctors.  Although his health showed signs of improvement, in the beginning, he had to be put on non-invasive ventilation on 28 May.  His condition remained stable until 10 June when it took a turn for the worse.  Despite the best available medical treatment, his condition deteriorated and the end came at 9.05 pm on the next day.

At 11.35 pm Maharaj’s body was taken to Nimtala Crematorium in Kolkata following the Covid-mandated norms.  The last rites started at 12.15 am (12 June) and were completed by 1.15 am.  A little later, his ashes were brought to Belur Math and immersed in the sacred Ganga.

Special worship and Bhandara in his memory were held at Belur Math on 23 June.  Because of the pandemic situation, the Belur Math premises continued to remain closed to devotees and visitors on that day.  Sannyasins and brahmacharins took part in Vedic chanting, bhajans, readings from the scriptures and Kali Kirtan held in the Sri Ramakrishna Temple in the morning.  These programmes were telecast live on the Belur Math YouTube channel.  In the afternoon, the message of Revered President Maharaj and talks of Swamis Gautamanandaji, Prabhanandaji, Suhitanandaji, Bhajananandaji, Girishanandaji, the General Secretary and a few others, all pre-recorded, were telecast on the same YouTube channel.  A life sketch of Revered Shivamayanandaji, both in Bengali and English, was published on the occasion.

On the advice of the headquarters, special worship and Bhandara were also held on the same day in some of our centres where Maharaj had either served or with which he had a close association.

Swami Shivamayanandaji was born in Supaul town of Bihar on 20 December 1934.  An initiated disciple of Swami Vishuddhanandaji Maharaj, he joined the order at Belur Math in 1959 and received sannyasa diksha from Swami Vireshwaranandaji Maharaj in 1969.

He served the Order at Belur Math and Sargachhi, Katihar, Rahara and Seva Pratishthan centres as an assistant, Saradapitha centre, first as an assistant and later as the head, and Swamiji’s Ancestral House and Cossipore centres as the head.  He was the headmaster of our high schools at Sargachhi and Katihar and the principal of Vidyamandira college at Saradapitha and of Vivekananda Centenary College at Rahara.

He was appointed a trustee of the Ramakrishna Math and a member of the Governing Body of Ramakrishna Mission in 1990.  In 1992, he was elected an Assistant Secretary of the twin organizations in which capacity he served for thirteen years.  Besides, he served as the Convenor of the Ramakrishna-Vivekananda Bhava Prachar Committee at the headquarters for more than two decades.  He also actively participated in various relief operations at different times.

Revered Maharaj started his spiritual ministry in 2016 by giving mantra diksha (spiritual initiation) to devotees.  The following year he was elected a Vice-President of the twin organizations.  Since then he was staying mostly at Kankurgachhi Math.  Only about two months ago (in April 2021), he moved to Cossipore Math after assuming the charge as its head – a responsibility which was in addition to his holding the office of Vice-President.  During his spiritual ministry, he blessed many devotees with mantra diksha in India, Bangladesh, Singapore and Malaysia.

Revered Maharaj was known for his openness and bold nature, his boundless energy, the courage of his convictions, and also for his enthusiasm to participate in different activities.  His love for the Himalayas and for a life of penance and austerities, for scriptures and seva, and his feeling for the poor endeared him to all.  His absence will be keenly felt by all who came in contact with him. Swami Atmadevanandaji (Dinesh Maharaj) passed away at Arogya Bhavan, Belur Math, on 7 June at about 6.45 am.  He was 76 and had been suffering from diabetes, hypertension and heart disease for several years.  Initiated by Swami Vireshwaranandaji Maharaj, he joined the order in 1967 at Rajkot centre and received sannyasa diksha from his guru in 1978.  He served the order at Belur Math dispensary, relief department of the headquarters and at Rajkot, Narendrapur, Malda, Vrindaban, Kankhal, Garbeta, Contai and Ranchi Sanatorium centres.  Thereafter, he stayed at Deoghar and Kanpur centres for some months.  He also participated in the drought relief operations at Malda in 1982.  He had been living a retired life at Belur Math for more than a decade.  His melodious chanting of Sanskrit hymns and lucid discourses on Sri Ramcharitamanas and Srimad Bhagavatam were well appreciated.  The swami had a keen sense of humour. Swami Shivatmananda (Jnan Maharaj), expired at Habiganj centre, Bangladesh, on 9 June at 4.50 am.  He was 72 and had been suffering from diabetes, hypertension and kidney disease for some years.  An initiated disciple of Swami Vireshwaranandaji Maharaj, he joined the order in 1976 at Dinajpur centre and received sannyasa diksha from Swami Gambhiranandaji Maharaj in 1986.  He served the order at Dinajpur and Dhaka centres as an assistant and Habiganj centre as the head.  After relinquishing the headship in 2018, he continued to stay at Habiganj centre as a retired monk.  Cheerful, witty and amiable by nature, he endeared himself to all who knew him. Swami Jnanadipananda (Uttam of Ramharipur centre) expired at Seva Pratishthan, Kolkata, on 19 June at 6.40 am due to severe Covid-19 pneumonia.  He was 58 and had been suffering from blood cancer for a couple of years.  Initiated by Swami Bhuteshanandaji Maharaj, he joined the order in 1989 at Kankurgachhi Math and received sannyasa diksha from his guru in 1998.  He served at the Math Office in Belur Math and at Kankurgachhi, Gurap and Ramharipur centres.  He was also a sevak of Swami Gahananandaji Maharaj at Kankurgachhi Math for some years.  In him, the order has lost a young and energetic member. Swami Sarveshwaranandaji (Deviprasad Maharaj), former head of Mymensingh centre, Bangladesh, passed away at Seva Pratishthan, Kolkata, on 24 June at 1.05 pm.  He was 75 and had been suffering from old-age ailments for some years.  Initiated by Swami Vireshwaranandaji Maharaj, he joined the order in 1967 at Dhaka centre and received sannyasa diksha from his guru in 1978.  He served at Dhaka centre as an assistant for 19 years and Mymensingh centre as the head for a long 27 years.  After relinquishing the headship in 2015, he continued to stay at Mymensingh centre till 2019 when he came to India for treatment at Seva Pratishthan.  Polite, austere and amiable by nature, he was liked by all who came in contact with him.

Distribution of Nutritious Food for Infants and Children: Ooty