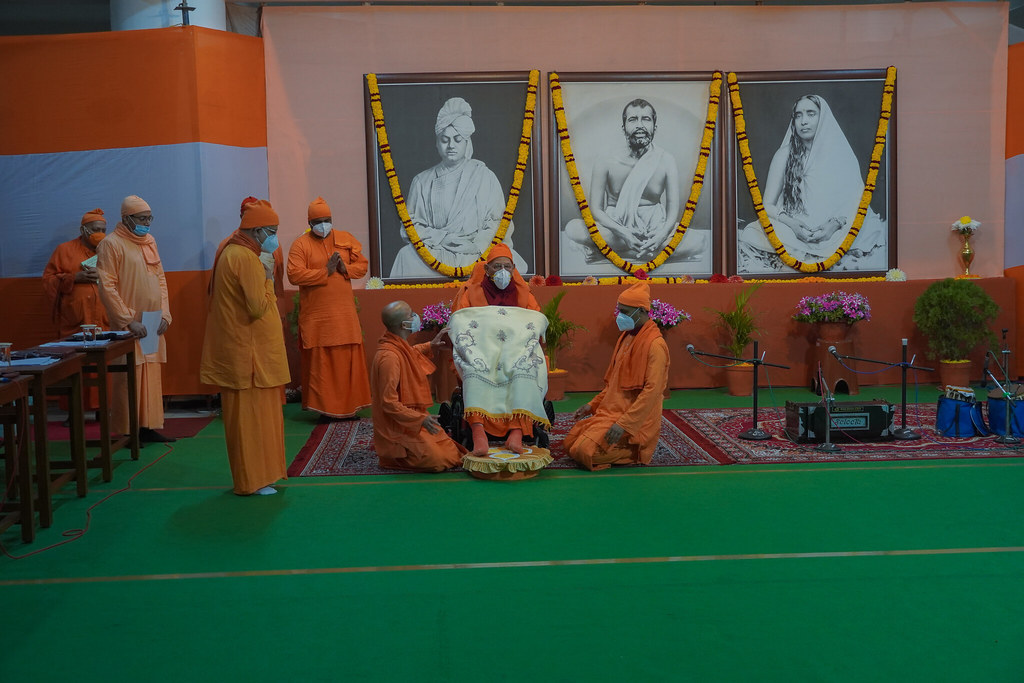 Swami Prabhanandaji visited Kankurgachhi Math from 21 to 24 February.  He will be visiting Baghbazar centre from 7 to 12 March.

Swami Suhitanandaji visited Ramharipur on 13 February, and Asansol from 18 to 26 February.  He will be visiting Ramharipur again from 8 to 17 March, and Limbdi, Rajkot, Bhuj, Vadodara and Ahmedabad from 27 March to 11 April.

The 112th Annual General Meeting of the Ramakrishna Mission was held at Belur Math on Sunday, 20 February.  Revered President Maharaj chaired the meeting.  In all, 165 monastic members, 34 lay members and 60 associates attended the meeting.

Swami Gautamananda ji inaugurated the newly built students’ hostel on the second floor of a residential building at Rajkot centre on 3 January.

On the initiative of Thanjavur centre, a plaque with details of Swami Vivekananda’s visit to Thanjavur was unveiled at Thanjavur railway station on 3 February.  The centre also conducted a drawing competition on 5 February at Porter Town Hall in Kumbakonam where Swami Vivekananda had delivered a lecture 125 years ago on 5 February 1897.  Efforts to install a statue of Swamiji at this place are in progress.

Sri R N Ravi, Governor of Tamil Nadu, visited Chennai Math on 6 February.  On the same day, he also paid a visit to Vivekananda House and inaugurated Vivekananda Navaratri festival.  As the festival was curtailed this year due to the pandemic, the events were held in virtual mode on only four days.

Narainpur ashrama opened the new girls’ hostel building at its Kutul tribal development centre in the interior region on 10 February.

Swami Gautamananda ji dedicated the new building with a prayer hall and monks’ quarters at Yelagiri centre on 10 February.

A tuition centre and two tailoring training centres set up by Nattarampalli Math at two nearby places were inaugurated by Swami Gautamananda ji on 12 February.

Swami Suhitananda ji dedicated an extension to the monks’ quarters at Ramharipur centre on 13 February.

Swami Gautamananda ji inaugurated Ranganathananda Dham (monks’ quarters) at Kalady Math on 16 February, the birthday of Swami Adbhutanandaji Maharaj.  In the inaugural programme, benedictory messages of Revered President Maharaj, Swami Prabhanandaji and Swami Suhitanandaji were read out, and the video message of the General Secretary was played.  On 17 February, Swami Gautamanandaji dedicated Ma Sarada Library at the Muvattupuzha sub-centre of Kalady Math.

In an outstanding achievement, a B.Com. student of Chennai Vidyapith secured, in his very first attempt, all-India second rank in the Professional Programme Examination (December 2021). This is the final examination one has to clear to become a professional company secretary, and is conducted by the Institute of Company Secretaries of India (ICSI), Ministry of Corporate Affairs, Government of India.

A class-7 student of the Higher Secondary School (Main) of Chennai Mission Ashrama won a gold medal in Silambam (an Indian martial art) event in the Youth Games International Championship held at Pokhara, Nepal, from 7 to 11 February.

The renovated tailoring unit of the vocational training centre at Asansol ashrama was inaugurated on 3 February.

Jhargram centre conducted a football tournament from 18 December to 19 February in which 64 teams from Jhargram district participated.

In a survey of schools in Bihar conducted by the Times of India newspaper, the school run by Katihar centre secured the 9th position at the state level and 2nd position at North Bihar region level.

Colombo centre, Sri Lanka, conducted several lectures, musical discourses and cultural events from 10 to 30 January in commemoration of the 125th anniversary of Swamiji’s visit to Sri Lanka.  The venues for these programmes included Colombo, Kandy, Vavuniya and Jaffna cities where Swamiji had halted on his way to India in 1897.  In another commemoration programme, a procession, discourses and cultural events were held in Mandoor town in Batticaloa district on 22 February.

The Governor of Eastern Province, Sri Lanka, presented an award to Batticaloa ashrama (sub-centre of Colombo branch) for its beautiful garden on 21 February.

Belagavi centre conducted 20 values education programmes at different places in Belagavi and Gadag districts from 1 December to 20 January.  In all, 2843 students participated in these programmes.

Delhi centre conducted three online workshops on values education from 21 to 26 February.  In all, 195 teachers, principals and students from different parts of India took part.

Rajkot Ashrama held online recitation competitions from 15 December to 25 January in which 939 children from 43 schools participated.

Thanjavur centre conducted a teachers’ training programme on 27 February in which 150 teachers from 47 schools took part.

Delhi: Eye operations for 10 patients and distribution of spectacles to 10 patients in January.

Gourhati: An eye camp on 19 February: 177 patients were checked, and subsequently 25 were operated on for cataract and 35 were given spectacles.

Kamarpukur: 458 eye patients were checked, 78 were operated on and 112 were given spectacles in February.

Kanpur: A medical camp at Nandi Gaushala village of Kanpur district on 13 February in which 103 patients were treated.

Madurai: An eye camp on 20 February: 158 patients were treated and subsequently 29 were operated on for cataract.

Manasadwip: (i) Conducted three eye camps in February in which 238 patients were treated, and (ii) Arranged cataract surgeries for 84 patients that month in association with another institution.

Mumbai: Medical camps at two villages in Palghar district on 20 February in which a total of 214 patients were treated.  Further, 13 patients were operated on for cataract between 25 January and 24 February.

Porbandar: An eye camp on 11 February: 100 patients were treated and subsequently 43 were operated on for cataract.

Salem: An eye camp on 13 February: 157 patients were checked, and subsequently 31 were operated on and 41 were given spectacles.

We record with sorrow the passing away of two of our brother monks. Swami Kamalanandaji (Shivu / Shivananda Maharaj) passed away at our hospital in Varanasi on 4 February at 6.15 pm.  He was 79 and had been suffering from diabetes and kidney disease.  Initiated by Swami Vireshwaranandaji Maharaj, he joined the order in 1970 at Delhi centre and received sannyasa diksha from his guru in 1981.  He served the order at the Headquarters Office and at Delhi, Kalady, Chennai Students’ Home, Advaita Ashrama (Kolkata) and Ranchi Morabadi centres as an assistant and Ponnampet, Chennai Mission Ashrama and Salem centres as the head.  He participated in relief and rehabilitation work in Andhra Pradesh in 1990-91.  Since 2008, he had been living a retired life, staying mainly at Halasuru Math and Varanasi Home of Service.  Though afflicted by several ailments for a number of years, he retained his beaming face till the very end.  He was known for his affectionate nature and witty remarks. Swami Satyarupanandaji (Santosh / Durgadutta Maharaj), head of Raipur centre, breathed his last at MMI Narayana Hospital, Raipur, on 27 February at 11.33 am.  He was 88 and had been suffering from colon cancer and other health problems.  An initiated disciple of Swami Yatishwaranandaji Maharaj, he joined the order in 1971 at Raipur centre and received sannyasa diksha from Swami Vireshwaranandaji Maharaj in 1980.  He served the order at the Headquarters Office (in Estate Department) and Saradapitha centre as an assistant, Prayagraj centre as the head, and Raipur ashrama first as an assistant and later as the head for a long 32 years.  The swami was a good speaker and has authored several articles.  Known for his gentle manners and affectionate nature, he endeared himself to all who came in contact with him.  The Chief Minister of Chhattisgarh and several other dignitaries sent their condolences on his demise. The state police accorded a guard of honour as a mark of respect to the departed soul.