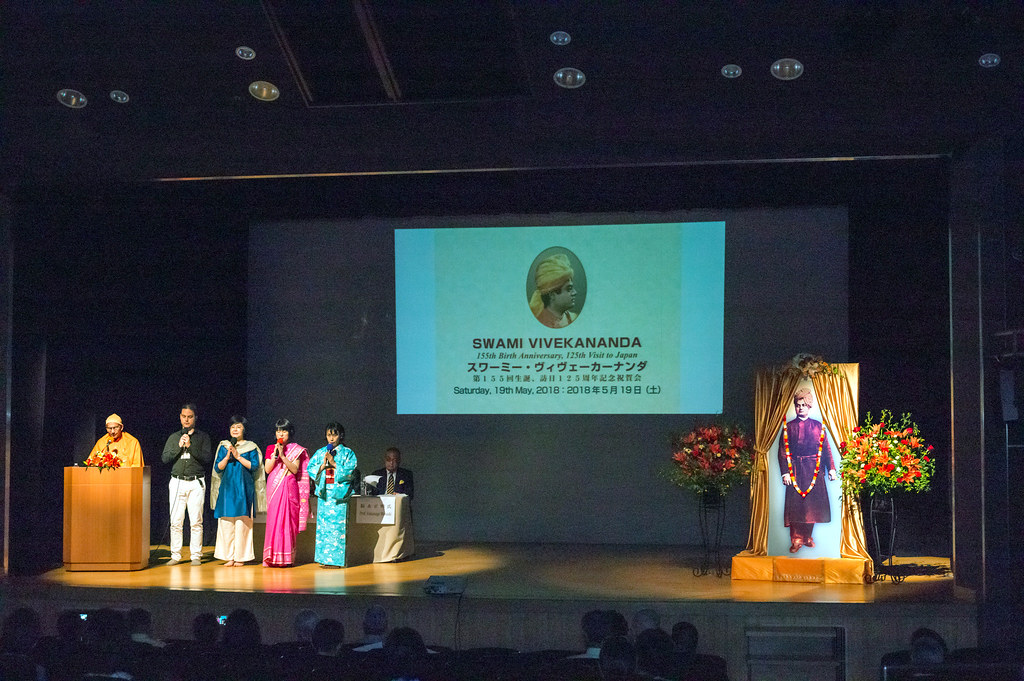 Revered President Maharaj is scheduled to visit Narendrapur from 14 to 22 September. He is keeping well.

Swami Vagishananda ji will be visiting Bankura and Purulia from 14 to 22 September. He is keeping well.

Swami Gautamananda ji is scheduled to visit Shimla and Chandigarh from 3 to 9 September, Coimbatore from 11  to 14 September, and UAE, Zambia and South Africa from 19 September to      3 October. He is in good health.

Swami Prabhananda ji  will be visiting Baghbazar centre from 25 September to 7 October.  He  is keeping well.

Swami Shivamayananda ji will be visiting Cooch Behar and Bongaigaon from 5 to 13 September, Visakhapatnam from 21 to 26 September, and Dhekiajuli, Tezpur, Itanagar and Guwahati from 28 September to 13 October. He is in good health.

Swami Suhitananda ji is scheduled to visit Barasat and Sikra-Kulingram from 4 to 17 September, and Gurap from 26 to 30 September. He is in good health.

Commemoration of the 125th Anniversary of Swami Vivekananda’s speeches at the World’s Parliament of Religions in Chicago, USA

Bengaluru: A four-day creative art camp from 30 July to 2 August in which 35 students from different art institutes participated. The young artists worked on a number of paintings and  sculptures, all based on the theme “Swamiji’s participation in the World’s Parliament of Religions”. Photos and Report

Bardhaman: A spiritual retreat on 12 August in which about 500 devotees took part. Photos and Report

Coimbatore Mission: Cultural competitions in five educational institutions in Coimbatore between 2 and 21 August. In all, 535 students took part in the competitions. At all five venues, the competitions were followed by a talk, awards ceremony, and a skit. Photos and Report

Jalpaiguri: Narayana seva on 15 August in which 140 poor people were sumptuously fed and given gifts of household articles. In the afternoon, Swami Shivamayananda ji delivered a special talk for nearly 200 devotees.

Lalgarh: Cultural competitions and speeches at a school on 27 August.

Madurai: Two personality development programmes on 1 and 13 August which were attended by 280 students in all.

Manasadwip: A youths’ convention on 26 August in which 525 youths took part. Photos and Report

Rajkot: A lecture on 5 August attended by 150 devotees.

Salem: Cultural competitions in 425 schools and colleges of Salem and Namakkal districts in July and August in which 41,953 students took part.

Shyampukur Bati: A youths’ convention on 21 August in which about 200 youths were in attendance.

Durban, South Africa: Fourteen special lectures and other programmes between 25 May and 7 July, which were attended by about 5500 people in all.

Mumbai: Seventeen programmes involving audio-visual presentations and quiz contests in 17 colleges in Mumbai and nearby areas from 12 December to 3 April in which a total of about 3000 students participated. Photos and Report

Kankurgachhi: A special lecture on 19 August which was attended by about 600 people.

Manasadwip: A procession, a panel discussion and cultural programmes on 25 August in which 750 delegates, mostly students, took part. Photos and Report

Medinipur: A spiritual retreat on 26 August in which 450 devotees took part.

Rajkot: A youths’ convention, a teachers’ seminar and a meditation session on 10, 11 and 12 August. In all, about 1800 people attended the programmes.

Swamiji’s Ancestral House: A lecture on 3 August attended by about 300 people.

Dibrugarh Ashrama conducted a free medical camp for cardiac patients on 15 July in which 81 patients were examined.

Limbdi centre conducted a free medical camp on 12 August in which 90 patients were treated.

Madurai Ashrama held a health awareness programme on 4 August which was attended by 205 people.

Swami Suhitananda ji inaugurated  the  new  poultry  building  at  Ranchi  Morabadi  centre  on 4 August in the presence of Sri Sudarshan Bhagat, Minister of State for Tribal Affairs, Government of India, and other dignitaries. Report and Photo

On 7 August, the golden jubilee celebration of Divyayan Krishi Vigyan Kendra of Ranchi  Morabadi centre was also inaugurated by Swami Suhitananda ji. A documentary on the Divyayan was released on this occasion. Report and Photos

The Governor of Karnataka felicitated the principal of Sri Ramakrishna Vidyashala of Mysuru centre on 12 August for the excellent results of the Vidyashala students in the class 12 final examinations held this year.

Dr Jitendra Singh, Minister of State for Prime Minister’s Office and Development of North Eastern Region, Government of India, inaugurated the newly built Swami Vivekananda Auditorium at Jammu centre on 26 August. The programme was attended by about 200 people. Report and Photos

Medinipur centre held a medical camp at Monidaha, a backward tribal area in Paschim Medinipur district, on 15 August, in which 1078 patients were treated.  Photos

A postgraduate student of the Vivekananda Institute of Medical Sciences of Seva Pratishthan secured first position in the final examination of DNB (in ENT discipline) conducted by the National Board of Examinations this year and received a gold medal.

A student of Mysuru Vidyashala was declared the best cadet of NCC Group Headquarters, Mysuru, in the junior division for the year 2017-18. 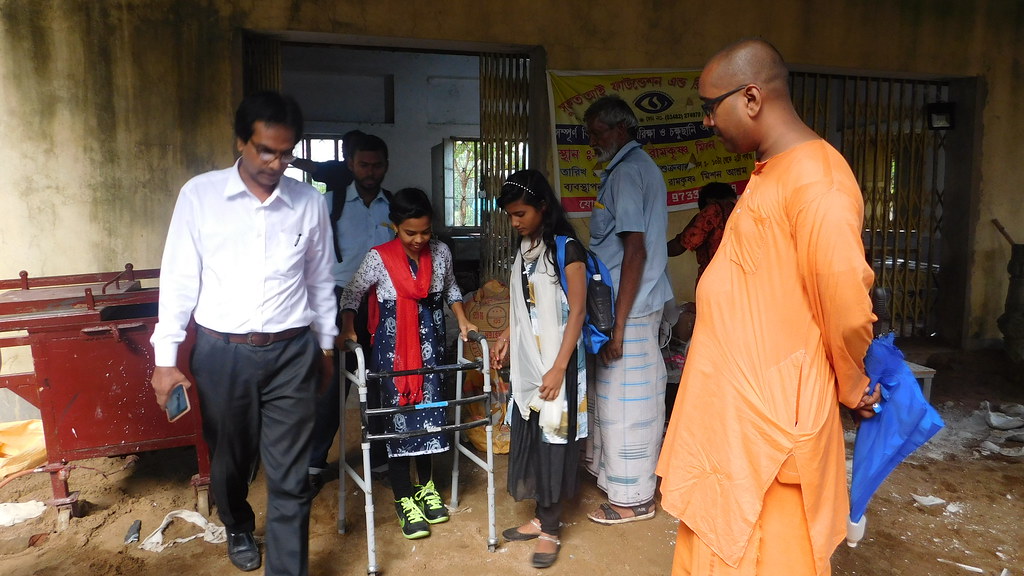 Chennai Students’ Home conducted a personality development programme spread over five Saturdays between 30 June and 28 July in which 55 students from 8 polytechnic colleges participated. Report and Photos

Delhi centre conducted 54 values education workshops between 9 July and 21 August, which were attended by 602 principals and 3054 teachers. The workshops were held in 12 states apart from Delhi.

Rajkot centre held 17 values education programmes in the month of August which were attended by 4396 students. The centre also held a residential youths’ camp on 18 and 19 August in which 59 college students took part.

Guwahati centre held a cleanliness march on 15 August. A school campus was also cleaned on that day. Photos

Coimbatore Mission Vidyalaya conducted three cleaning drives in August in which the Vidyalaya students cleaned Mettupalayam railway station, a public road and an office of the forest department.

Japan centre commemorated the 125th anniversary of Swamiji’s visit to Japan by holding public meetings and cultural events in Tokyo and Kobe in Japan on 19 May and 30 June. A good number of people took part in both the programmes. Besides these, a group of devotees also paid their respects to Swamiji at the harbour in Kobe where Swamiji had landed in 1893 on his way to the USA. Report and Photos

Swami Somananda ji (Doraiswami Maharaj)  passed  away  at  Chennai  Math  on  4  August  at 4 pm. He was 98. An initiated disciple of Swami Virajananda ji Maharaj, he joined the order in 1938 at Ootacamund centre and received sannyasa diksha from his guru in 1948. He served as an assistant at Ootacamund, Chennai Math, Singapore, Kanchipuram, Salem, Chennai Students’ Home and Coimbatore Mission centres and later as the head of Salem centre. He had been living a retired life at Chennai Math since 2002. Austere and self-reliant, he was meticulous in his routine even at an advanced age. The Swami was loved and respected by all for his simplicity and gentle manners.

Swami Chetasananda ji (Shukdeb Maharaj) expired at Seva Pratishthan, Kolkata, on 18 August at 2.30 pm. He was 80 and had been suffering from old-age ailments for some years. Initiated by Swami Vishuddhananda ji Maharaj, he joined the order in 1960 at Narendrapur centre and received sannyasa diksha from Swami Vireshwarananda ji Maharaj in 1970. He spent almost his entire monastic life at Narendrapur centre. Since October 2017, he had been living a retired life at Belur Math. The Swami was affectionate and jovial by nature.

Swami Sharanyananda ji (Devavrata Maharaj), the monk in charge of Koalpara Ashrama, passed away on 27 August at 5.30 pm at Seva Pratishthan, Kolkata. He was 78. On the evening of 18  August, while he was strolling near Koalpara Ashrama, he met with an accident and suffered a severe brain injury and two fractures in the right leg. He was immediately rushed to Seva Pratishthan.  On  19 August, he underwent brain surgery at Park Clinic, Kolkata. After a few days, he was  brought back to Seva Pratishthan. Despite the best available medical treatment, his life could not be saved.  An initiated disciple of Swami Madhavananda ji Maharaj, he joined the order at Saradapitha in 1962 and received sannyasa diksha in 1972 from Swami Vireshwarananda ji Maharaj. He served at the Headquarters and Saradapitha, Vrindaban, Kankhal and Kamarpukur centres as an assistant, and Shyamla Tal and Chandipur centres as the head. He was in charge of the Koalpara sub-centre for the last ten years. Austere in his habits, he was known for his calm demeanour.