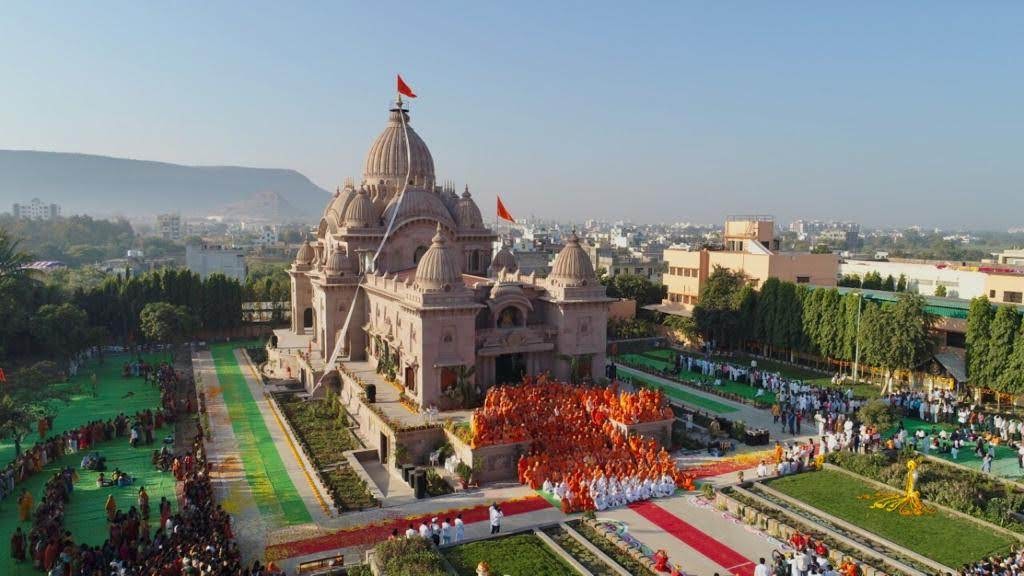 Swami Gautamananda ji, now at Karimganj, will be visiting Raipur and Narainpur from 3 to 9 December, Ranebennur and Davanagere from 13 to 17 December, Rajapalayam on 19 December, and Hosur, Nattarampalli and Yelagiri from 20 to 25 December.  He is in good health.

Swami Prabhananda ji is scheduled to visit Baghbazar Math from 12 to 19 December.  He is keeping well.

Swami Suhitananda ji is scheduled to visit Ichapur from 7 to 10 December, and the Institute of Culture, Kolkata, from 17 to 22 December.  He is in good health.

The General Secretary inaugurated the new gangway and pontoon-type jetty near Sadhu Nivas at Belur Math on 4 November.

The Phoenix Ashrama in South Africa, which was so long a sub-centre of Durban Ashrama, has been made a full-fledged branch centre of Ramakrishna Mission.

Further, our sub-centre at Johannesburg has been kept under the supervision of Phoenix Ashrama.

Almora: A public meeting on the Almora campus of Kumaun University on 25 October which was attended by nearly 400 people.

Baghbazar: A spiritual retreat on 25 November in which nearly 900 devotees participated.

Chennai Students’ Home: A students’ convention on 26 October in which about 500 students from 16 schools participated. Photos and Report

Coimbatore Mission: Cultural competitions in 13 schools and colleges in Coimbatore between 26 September and 16 October.  In all, 2085 students took part in the competitions.  At all the venues, the competitions were followed by a talk, an awards ceremony and a skit. Photos and Report

Indore: An inter-school elocution competition on 27 October in which students from 13 schools participated.

Jammu: A youths’ convention on 10 November in which 140 youths took part.

Jhargram: A spiritual retreat on 23 November in which about 1000 people took part.

Koyilandy: A public meeting on 21 October attended by about 250 people. Photos and Report

Mangaluru: Lecture programmes in 33 colleges from September to November which were attended by about 7500 students.  The centre also observed a day-long music festival on 7 October.  About 800 people were in the audience on that day.

Mumbai: A day-long programme at a public auditorium in Mumbai on 29 September which included talks, screening of a documentary, and cultural events.  Sri C Vidyasagar Rao, Governor of Maharashtra, inaugurated the programme, and the General Secretary and a few others addressed the gathering.  About 800 people, comprising mostly youths, were in attendance.

Mysuru: Three students’ conventions on 3, 4 and 6 October in which 708 college students took part, and three workshops for students on 3, 24 and 29 November in which a total of 981 students participated. Photos and Report

Pune: A devotees’ convention on 11 November attended by 350 devotees.

Sarisha: A students’ convention and a devotees’ convention on 6 and 7 October which were attended by about 1500 people in all.

Shillong: A seminar on the topic ‘Towards the Emergence of a Universal Religion’ on 10 November, in which 70 people took part.

Vadodara: An interfaith meet on 2 October which was attended by 250 people.

Visakhapatnam: Cultural competitions in four districts of Andhra Pradesh from July to November in which 49,698 students took part.  In the first round 4948 prizes were given and in the final round 16 students were awarded prizes and certificates.

Durban, South Africa: A public meeting at the Pietermaritzburg sub-centre on 2 October in which Swami Gautamanandaji and others delivered speeches.

Faridpur, Bangladesh: A public meeting on 11 November in which the General Secretary and a few others spoke.

Gretz, France: A programme on 30 September consisting of meditation, talks and music.  The venue was a big boat which went sailing on the River Seine in Paris while the event was in progress.  Sri Vinay Mohan Kwatra, Ambassador of India to France, and others numbering about 240 participated in the programme.

The Netherlands: A programme of talks, recitations, music and video shows in Groningen city  on 18 November. Photos and Report

New York Vedanta Society, USA: An interfaith conference on 17 November which was attended by about 200 people.

Phoenix, South Africa: Public meetings on 25 September and 1 October at the Johannesburg sub‑centre and Phoenix centre respectively which were attended by about 700 devotees in all.  Swami Gautamanandaji addressed both the meetings.

Chennai Math: A talk and cultural programmes on 28 October which were attended by 250 people.

Gadadhar Ashrama: A special lecture on 28 October attended by 80 people.

Kankurgachhi: A devotees’ convention on 11 November attended by about 800 devotees.

Rajkot: A seminar on Sister Nivedita on 28 October in which about 600 people took part.

Aurangabad centre conducted a three-day programme from 16 to 18 November in connection with the consecration of its newly built Sri Ramakrishna Temple.  On the first day, Swami Gautamananda ji and Swami Shivamayananda ji inaugurated Vivekananda Hall and monks’ quarters respectively.  Swami Vagishanandaji consecrated the new temple on 17 November, the day of Jagaddhatri Puja.  Public meetings, religious discourses and cultural events were held on all three days, in which 325 monks and about 5000 devotees participated.

Bengaluru centre celebrated the platinum jubilee of its Vidyarthi Mandiram (students’ home) from 23 to 25 November with public meetings and cultural programmes. The General Secretary presided over the public meeting held on the last day.

Bardhaman centre conducted a medical camp at Jhikardanga village on 6 November in which  460 people were treated. Photos and Report

Guwahati centre held a medical camp on 25 October for patients suffering from skin diseases.  In all, 152 patients were examined by six specialist doctors.

Kailashahar centre conducted two medical camps, one on its premises on 9 November and another on 10 November at a school.  In all, 871 patients were treated by six specialist doctors in the camps.

Narainpur centre held a football tournament from 16 to 22 October in which 12 teams, mostly from different villages of Narainpur, played. Photos and Report

Delhi centre conducted 15 values education workshops in Assam, Delhi, Goa, Haryana, Tamil Nadu and Uttar Pradesh between 29 September and 27 November which were attended by 734 teachers in all.

Rajkot centre held nine values education programmes, five on its own premises and the rest in four schools in Rajkot, between 23 September and 7 October.  The programmes were attended by 1875 students.

Sarisha centre conducted a personality development programme for the youth on 2 September which was attended by 220 youths.

San Francisco centre, USA, recently carried out a major renovation of its Old Temple.  The California Heritage Council presented a certificate to the centre on 24 October in appreciation for the work of restoration and preservation of the temple. Photos and Report

Faridpur centre, Bangladesh, celebrated the centenary of its primary school, Mahakali Pathashala, on 11 November.  The General Secretary presided over the meeting, which was attended by a number of monks and former students of the school.

The General Secretary laid the foundation stone for the proposed dispensary building at Narail sub-centre of Jessore Ashrama, Bangladesh, on 9 November.

Swami Panchananananda (Saumen) passed away on 7 November at 5.20 am at Varanasi Home of Service.  He was 34.  He had been suffering from erythroleukaemia, a rare acute form of blood cancer, for the last three years.  Initiated by Swami Ranganathanandaji Maharaj, he joined the order in 2003 at Belur Math and received sannyasa diksha from Swami Atmasthanandaji Maharaj in 2013.  He served at the Headquarters, Kalady centre and Vivekananda Veda Vidyalaya, Belur Math.  He had been staying at Varanasi Home of Service for the past month.  In his untimely demise, the order has lost a dedicated and promising young member.

Swami Jagadatmananda ji (Lakshminarayan Maharaj) passed away at a hospital in Mysuru on 15 November at 7.29 pm due to pneumonia. He was 88 and had been suffering from oral cancer for some years. Initiated by Swami Yatishwaranandaji Maharaj, he joined the order in 1960 at Bengaluru Math, and received sannyasa diksha from Swami Vireshwaranandaji Maharaj in 1969. He served at Mangaluru and Mysuru centres as an assistant and Singapore, Shillong and Ponnampet centres as the head. He also served as an acharya, and later as the principal of the Training Centre.  He had been living a retired life at Ponnampet centre since 2011.  The Swami authored a few books in Kannada, including Badukalu Kaliyiri which became a bestseller and was translated into English (under the title Learn to Live) and several other languages.  He was also a powerful speaker.  Simple, affectionate and affable by nature, he endeared himself to all, especially to youths who would flock to him for inspiration and guidance.