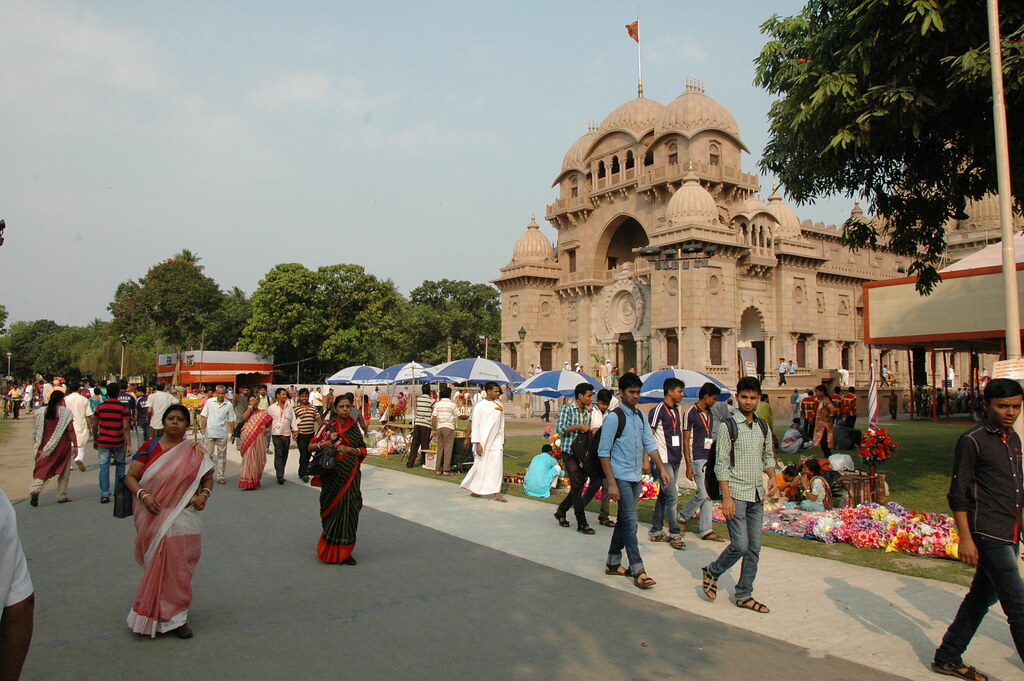 Revered President Maharaj’s health condition is now stable. He continues to be at Seva Pratishthan.

Swami Smarananandaji will be visiting Baranagar Mission Ashrama from 4 to 9 April, and Chandipur and Tamluk from 17 to 23 April. He is keeping well at Belur Math.

Swami Vagishanandaji is scheduled to visit Vrindaban and Delhi from 5 to 11 April, and Ranchi from 18 to 23 April.  Now at Cossipore Math, he is in good health.

Swami Prabhanandaji returned to Belur Math on 23 March from Kankurgachhi Math where he was recovering from the knee replacement surgery on his left knee. He is keeping well. He will be visiting Kankurgachhi from 26 April to 7 May.

The birthday (tithi  puja)  of  Sri  Ramakrishna  was  celebrated  at  Belur  Math  on  Thursday, 10 March. Cooked prasad was served to about 24,000 devotees. The General Secretary presided over the public meeting held in the afternoon.

The annual Public Celebration in connection with Sri Ramakrishna’s birthday was held at Belur Math on Sunday, 13 March. More than a lakh visitors thronged the premises throughout the day. Cooked prasad was served to about 36,000 persons.

Siddharth United Social Welfare Mission (SUSWM), Kolkata, conferred SUSWM Great Social Service Award 2016 on Ramakrishna Math and Ramakrishna Mission in recognition of the twin organizations’ service to society. On behalf of the Math and Mission, Swami Divyananda received the award, comprising a medal and a citation, in a function held in Kolkata on 13 March. Swami Smarananandaji inaugurated the newly built multipurpose block on the campus of Probationers’ Training Centre at Belur Math on 4 March, and the new educational and cultural complex near the Old Math (erstwhile Nilambar Mukherjee’s Garden House) at Belur Math on 9 March.

Chennai Math held a hari-katha (discourse intermingled with songs) on Sister Nivedita during Vivekananda Navaratri celebrations on 9 February at Vivekananda House. A special photo exhibition on Nivedita was also arranged.

Ranchi Morabadi centre conducted five block-level and one district-level youth conventions from 10 February to 5 March. In all, 1013 youths participated in the conventions. The centre also held a programme on women empowerment on  8 March, International Women’s Day, in which about 350 women from 101 villages took part.

Email IDs: The following centres have got new email ids shown against their names:

Vivekananda University conducted a national seminar on the three major schools of Vedanta from 29 February to 3 March. Sri E S L Narasimhan, Governor of Andhra Pradesh and Telangana, inaugurated the seminar, and the General Secretary presided over the inaugural meeting. Special lectures on different Vedantic texts were also held from 1 to 5 March.

Chandipur Math held the inaugural function of its yearlong centenary celebration on 10 March, the sacred birthday of Sri Ramakrishna, with special puja, a procession, a public meeting and cultural events. About 8000 people attended the programmes. A seminar for teachers was held on 12 March in which 160 teachers took part. On 20 March the General Secretary inaugurated the newly built first floor on Vivekananda Hall and presided over a youth convention which was attended by 190 youths.

Swami Gautamanandaji, a Trustee of Ramakrishna Math and Member of the Governing Body of Ramakrishna Mission,  inaugurated the newly built staff quarters, ‘Swami Ramakrishnananda Bhavan’ at Kadapa centre on 12 March.

Cooch Behar centre conducted a teachers’ convention on 13 March in which 120 teachers from different schools and colleges of Cooch Behar district participated.

Chennai Math distributed buttermilk and sharbat to about 37,000 people on 20 and 21 March on the occasion of the annual Ratha Yatra and other celebrations of  Sri Kapaleeshwarar Temple, Chennai.  The centre also conducted a cleaning programme on the temple’s campus on 21 March.

Swami Suhitanandaji, General Secretary, Ramakrishna Math and Ramakrishna Mission, inaugurated, in the presence of Swami Shivamayanandaji and others, the newly constructed vocational-training-cum-production centre of Baghbazar Math on 25 March. The unit is located at Pranakrishna Mukherjee Lane, Kolkata.

Further, in the Inter-Division Sports Meet they secured first place in Kho-Kho and March Past events, and three prizes in athletic events. Trophies, medals and certificates were issued to the winners and the college.

King Juan Carlos University, Madrid, Spain, conducts, on its campus, a programme called Model United Nations (MUN) which is a simulation of the workings of different organs of the United Nations. In that programme, delegates representing a country or an international organization debate on issues of international relevance. A student of Chennai Vidyapith participated as chairperson of the Human Rights Council in the fourth edition of MUN which was held from 2 to 5 February.

Central Board of Secondary Education (CBSE) held its ‘Expression Series’ competition with Swami Vivekananda as the theme on 12 January. A class-9 student of Deoghar Vidyapith participated in it and was awarded a certificate of merit and a sum of 2500 rupees for his essay on Swamiji in Sanskrit.

On 13 March, Rajamahendravaram (Rajahmundry) centre conducted a free medical camp at Rampachodavaram, a place mostly inhabited by tribal people.  A team of 15 doctors, including a few specialists, treated 803 patients, of whom 217 underwent different diagnostic tests.

Madurai Math held an acupuncture camp on 20 March in which 61 patients were treated.

The following centres conducted cleanliness drives in their respective areas and raised public awareness about cleanliness:

Students and staff of Chennai Students’ Home polytechnic cleaned a government hospital in Chennai on 27 February.

Kamarpukur centre carried out its fourth cleanliness drive on 27 March in which several monks, employees and volunteers cleaned a few streets in and around Kamarpukur village.

Nagpur Math, as a part of its yearlong Swami Akhandananda Swachchhata Prakalpa, held three cleaning programmes in March in which 80 people cleaned a slum in Nagpur.

Students and teachers of Indore school cleaned a public road in the city on 21 March.

Gurap Ashrama conducted two programmes on values education on 25 and 26 March which were attended by 380 persons, comprising mainly students, on each day.

Jammu Ashrama conducted a values education programme on 6 March which was attended by about 200 people.

Kamarpukur centre held seminars on values education on 15 and 26 March in which altogether 800 delegates participated.

Khetri centre conducted the following programmes from 20 January to 20 February:

Pune Math held a seminar on personality development on 26 February in which 165 nursing students took part.

Visakhapatnam centre held a competition on Swami Vivekananda’s quotations from 16 January to 6 February in which 18,400 students of 196 schools in 3 districts of Andhra Pradesh participated.

Three ministers of the Government of Bangladesh, namely Finance Minister Mr Abul Mal Abdul Muhit, Home Minister Mr Asaduzzaman Khan, and State Minister for Women and Children’s Affairs Meher Afroz Chumki, and several other dignitaries spoke in the meetings organized by Dhaka centre as a part of its five-day-long Sri Ramakrishna’s birthday celebration from 7 to 11 March.

On 19 March, Swami Vivekananda College of Ramakrishna Mission, Fiji, co-organized a leadership orientation programme for students of 9 secondary schools of Nadi in which 241 students and 37 teachers participated.

We record with sorrow the passing away of Swami Samagranandaji (Vidyaprasanna Maharaj) on 23 March at 11.10 pm at Tiruvalla Ashrama. He was 86 and had been suffering from some old-age ailments for the last few years. Initiated by Swami Shankaranandaji Maharaj, he joined the Order in 1950 at Mangaluru centre and had Sannyasa from his Guru in 1960. Besides his joining centre he served at Belur Math (where he was mainly engaged in rendering personal service to Swami Devatmanandaji [Indu Maharaj] of Portland centre who had returned to India owing to ill-health) and Chandigarh,  Kozhikode, Tiruvalla,  Coimbatore  Mission and Colombo (Sri Lanka) centres. He also participated in cyclone relief and rehabilitation project in Tiruchirappalli district in 1977. He was the head of Tiruvalla centre for 15 years and, after relinquishing that post in October 2009, had been living a retired life there. Kind-hearted and sweet by nature, the Swami was admired by all for his unassuming and contented life and punctuality in his monastic routine.