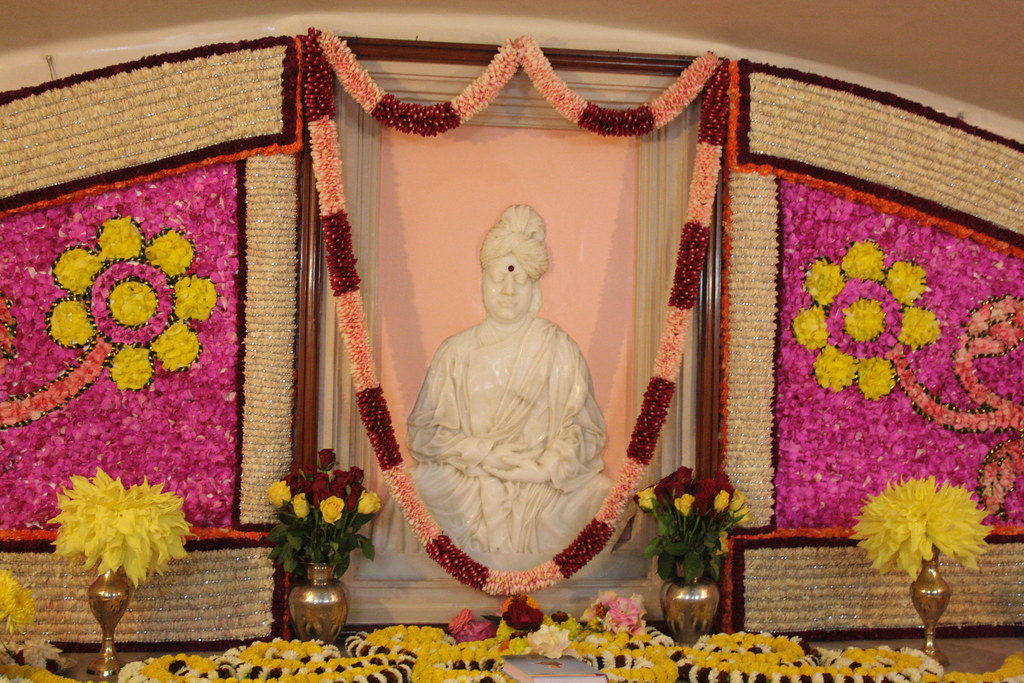 Swami Atmasthanandaji, President, Ramakrishna Math & Ramakrishna Mission, continues to be at Seva Pratishthan, Kolkata.  There is no significant change in his health condition.

Swami Smarananandaji, Vice-President, will be visiting Chennai and Coimbatore from 5 to 25 February.  He is keeping well at Belur Math.

Swami Vagishanandaji, Vice-President, is scheduled to visit Kamarpukur and Khirpai (Dist. Paschim Medinipur) from 9 to 15 February, and Agartala from 21 to 25 February.  Now at Cossipore Math, he is in good health.

Swami Prabhanandaji, Vice-President, will be visiting Gol Park and Baghbazar centres from 3 to 17 February, and Bankura centre from 21 to 28 February.  He is keeping well at Belur Math.

The birthday of Holy Mother was celebrated at Belur Math on Friday, 1 January.  Thousands of devotees attended the celebration throughout the day.  Cooked prasad was served to about 31,000 devotees.  Swami Divyanandaji chaired the public meeting held in the afternoon. [See Photos and Videos]

The birthday of Swami Vivekananda was celebrated at Belur Math on Sunday, 31 January.  Thousands of devotees attended the celebration throughout the day.  Cooked prasad was served to about 20,000 devotees.  Swami Balabhadranandaji presided over the public meeting held in the afternoon. [See Photos]

In response to our request, the Government of West Bengal had handed over to Ramakrishna Mission the management of the guesthouse-cum-waiting-hall opposite to Belur Math Main Entrance on GT Road in November 2014.  In the meantime, the remaining work on this building, named Ramakrishna Mission Nivedita Devotees’ Cottage, was completed.  On 27 January, Mamata Banerjee, Chief Minister of West Bengal, declared open the building in a function held at Red Road, Kolkata.

The National Youth Day was celebrated with great enthusiasm and in an impressive way by many of our centres.

Madurai Math held an essay-writing competition in which 16,800 students from 133 educational institutions in Tamil Nadu participated.  Sri V Shanmuganathan, Governor of Meghalaya and Manipur, took part in the special programme held on 12 January.

Nagpur Math conducted cultural competitions for students in which 11,696 students from nearly 150 schools in and around Nagpur took part.

Rajkot centre held cultural competitions for students in which 4800 students from 150 schools and colleges participated.

Vadodara centre held a written quiz competition in which 1,01,406 students from 1119 schools in Gujarat took part.

Visakhapatnam centre conducted a youth convention at Andhra University, Visakhapatnam, on 12 January which was addressed among others by Sri Chandrababu Naidu, Chief Minister of Andhra Pradesh, and attended by about 3000 youths.

The following centres and the Headquarters (along with Saradapitha) celebrated the Day with various programmes such as processions, speeches and cultural competitions:

Celebration of the 150th Birth Anniversary of Swami Akhandanandaji Maharaj

Nagpur Math held a youth convention on 2 January in which 550 youths took part, and special lectures on 2 and 3 January which were attended by about 300 devotees.

Celebration of the 150th Birth Anniversary of Swami Saradanandaji Maharaj

Barasat Math held a youth convention on 10 January in which 310 youths took part.

Kamarpukur centre conducted conventions for youths, volunteers and devotees on 21, 22 and 23 January respectively.  They were attended altogether by 2650 people.

Swami Vivekananda’s Ancestral House, Kolkata, held three special lectures on 9, 28 and 30 December which were attended altogether by 1250 people.  A play on Sister Nivedita was staged on 29 December which was watched by 450 people.

The following centres cleaned public places and streets in their respective areas and spread awareness among people about cleanliness:

Kamarpukur centre undertook the cleaning of a few streets in its vicinity and a playground on 31 December and 26 January.  About 300 people, including members of local associations and government officers, joined hands with the centre in the cleaning programmes.

Mangaluru centre launched Swachchha Mangaluru, a cleanliness drive on 1 February 2015.  So far, the centre has conducted 38 cleaning programmes, including 5 in January 2016.  About 12,000 youths and school children took part in these programmes, in which, apart from cleaning roads and other places, some minor civil works at public places were also undertaken.

Chennai Sarada Vidyalaya celebrated its platinum jubilee on 8 and 9 January.  Among the other events held on this occasion, a life-size statue of Holy Mother was installed on the centre’s main campus at Usman Road, Chennai.  Swami Gautamanandaji and Swami Suhitanandaji, General Secretary, Ramakrishna Mission, among others attended the different programmes held on the occasion.

Seva Pratishthan conducted a round-the-clock medical camp during Makar Sankranti Mela at Sagar Island in South 24-Parganas district from 10 to 15 January.  In all, 5419 patients were treated, out of which 55 received indoor medical care.  Besides, 150 blankets and about 5000 copies of religious books were distributed among the pilgrims.

On the occasion of Gangasagar Mela, Manasadwip centre organized a camp at the Mela area from 11 to 16 January.  In all, 1175 pilgrims were provided with free board and lodging at the camp and the Ashrama.  Besides, free meals were served to about 250 non-resident pilgrims daily. Discourses and devotional singing were also arranged in the camp.

Rajahmundry centre held two medical camps in the nearby Seetanagaram village on 11 and 12 January.  In all, 677 patients were treated and 242 diagnostic tests, including X-ray & ECG, were done.

A homeopathic dispensary and spoken English classes were inaugurated at Puri Math on 15 January.

On 20 January the new monks’ quarters building at Imphal centre was inaugurated by the Swami Suhitanandaji, General Secretary, Ramakrishna Mission, and the foundation stone for the proposed Institute of Human Excellence was laid by Sri O Ibobi Singh, Chief Minister of Manipur.

Kamarpukur centre held a farmers’ fair from 20 to 22 January in which about 100 farmers took part.

As a part of its year-long centenary celebration, Belgharia Students’ Home conducted a two-day residential youth convention on 24 and 25 January.  Over 300 delegates from different districts of West Bengal participated in the convention.

A class-12 student of Chennai Mission Ashrama won a gold medal in the road cycling event at the state-level sports and games competitions organized by the School Education Department, Government of Tamil Nadu, at Neyveli in Cuddalore district on 7 January.

Seventy-one students of class 11 of Narendrapur school participated in the Junior Scholarship Test – 2015, a competition for school students conducted by Jagadish Bose National Science Talent Search, Kolkata.  Out of them, 26 students were awarded junior scholarship and 11 received junior encouragement award.  Besides, the school won the Best School Award.

In the 15th National Paralympic Swimming Championship held at Belgaum from 27 to 30 November, 6 students of Narendrapur Blind Boys’ Academy (2 each in senior, junior and sub‑junior groups) won 12 gold and 11 silver medals in different events as given below.  Besides, one student was awarded National Paralymic Champion Trophy for securing 4 gold medals in the sub‑junior group.

Under-17 and Under-19 Ball Badminton teams of Tamil Nadu, having respectively one and three students of our Chengalpattu higher secondary schools, stood first in the 61st National School Games.  The championship was organized by School Games Federation of India in January.

Salem Ashrama conducted values education programmes at six colleges in and around Salem district from 28 December to 22 January.  In all, 1300 students attended the programmes.