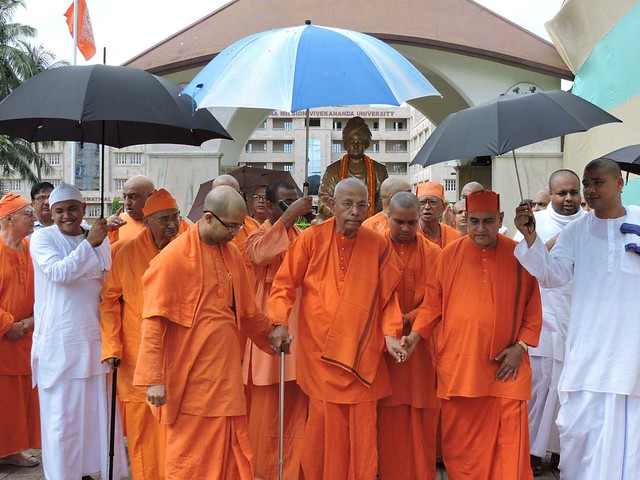 Swami Smarananandaji, Vice-President, was admitted to Peerless Hospital, Kolkata, on 8 July as he complained pain in his spine and hip joint.  The tests revealed a spinal cord compression owing to osteoporosis. On 15 July, he was shifted to Narendrapur Ashrama where he is recovering.  All his scheduled programmes for August have been cancelled.

Swami Vagishanandaji, Vice-President, is scheduled to visit Institute of Culture, Kolkata, from 16 to 20 August and Bamunmura from 27 to 30 August. He is keeping well at Cossipore Math.

Swami Prabhanandaji, Vice-President, will be visiting Agartala from 4 to 16 August, and Jamshedpur and Ghatshila from 24 to 31 August. He is keeping well.

Baranagar Math held a students’ convention on 26 June in which about 130 students participated.

Kankurgachhi Math conducted a devotees’ convention on 24 July which was attended by 800 devotees.

Swamiji’s Ancestral House held two lectures on 27 June and 9 July which were attended altogether by 500 people.

The renovated emergency department at Itanagar hospital was inaugurated on 28 June.

Saradapitha celebrated its platinum jubilee from 1 to 3 July.  Swami Smarananandaji, Vice-President, Ramakrishna Math and Ramakrishna Mission, presided over  the  inaugural  session. Swami  Gautamanandaji  and  several  other  monks  addressed  the different sessions which were attended by a good number of monks and devotees.  A devotees’ convention, cultural programmes and a documentary show formed a part of the three-day programme. (Click here to see more photos)

The eleventh foundation day celebration and the annual convocation of Vivekananda University were held at Narendrapur centre on 2 July.  Dr Jitendra Singh, Union Minister of State, Ministry of Development  of  North  Eastern  Region,  delivered  the  convocation  address.  In  all,  89 students received their degrees.

Agartala centre organized a blood donation camp on 3 July which was inaugurated by Sri Manik Sarkar, Chief Minister of Tripura. A total of 37 persons donated blood in the camp.

On the sacred occasion of Ratha Yatra, Puri Math conducted a medical camp from 6 to 14 July in which 1256 patients were treated. The Ashrama also served sharbat to 15,000 pilgrims.

Puri  Mission Ashrama  served  lemonade  to  about  15,000  pilgrims  and  distributed  13,000 pouches of drinking water among them during the Ratha Yatra festival.  In the medical camp organized on this occasion 296 patients were treated.

By the joint efforts of Almora centre and several other institutions, a sapling of the historic peepal tree, under which Swamiji had meditated in 1890 and had a profound realization on the relation between microcosm and macrocosm, was planted at the very place of the old tree in Kakrighat, near Almora, on 15 July.  The sapling had been cloned from the original tree when it was still alive a few years ago. (Click here for more photos.)

Purulia Vidyapith has been awarded Ramawatar Gupta Pratibha Puraskar 2016 by Sanmarg Foundation, Kolkata, for achieving the best results in Hindi in class-10 examination conducted by West Bengal Board of Secondary Education.  Sri Keshari Nath Tripathi, Governor of West Bengal, handed over the award consisting of a certificate and trophy in a function held at Kolkata on 25 June.

Twenty-six students of Ekalavya Model Residential School, Jhargram, based on their good performance  in  Jagadis  Bose  National  Science  Talent  Search  (JBNSTS)  examination,  have been selected to participate in a workshop to be held at JBNSTS, Kolkata, from 30 August to 3 September.  The process of taking over the school and starting a branch of the Mission on the school campus is underway.

Ranchi Morabadi centre conducted an eye care programme from 20 June to 21 July in which eye check-up of 1633 children and 377 adults was done; free glasses were provided to 43 persons with refractory errors, and 12 patients were operated upon for cataract. (Click here to see more photos.)

Baranagar  Mission  Ashrama  conducted  a  cleaning  programme  on  30  June  in  which 550  students and others cleaned  the roads and lanes of Baranagar locality and the Ashrama premises. (Click here for full report and photos.)

Different institutions under Coimbatore Mission centre held a number of cleanliness-related programmes in the month of June.   The students took a pledge for a clean India and attended special lectures on cleanliness. They also cleaned several government offices, temple premises, roads and a hospital.

At   the   request   of   Howrah   Municipal   Corporation,    Shilpamandira   (polytechnic   under Saradapitha) is maintaining, since June, a lawn laid beside the footpath on GT Road near Belur Math.

Values Education and Youth-related Programmes conducted by Centres in India

Vadodara centre conducted a youth convention from 3 to 5 July in which 650 youths from 15 states participated. (Click here for detailed report and photos.)

Hyderabad Math held a residential youth camp from 1 to 3 July in which 250 youths participated. (Click here for more photos.)

Koyilandy centre conducted a youth camp on 29 May in which 83 youths took part.

Port Blair centre arranged two values education workshops on 20 and 21 July in which about 450 students and teachers participated.

Dhaka centre conducted a devotees’ convention on 19 July which was attended by about 800 people. (Click here for more photos.)

We record with sorrow the passing away of Swami Nishkalanandaji (Prabir Maharaj) at Arogya Bhavan, Belur Math, on 20 July at 10.30 am owing to cardiac arrest. He was 92 and had been suffering from asthma, hypertension, diabetes and cardiac problems for some years.   Initiated by Swami Virajanandaji Maharaj, he joined the Order in 1950 at Varanasi Home of Service and had Sannyasa from Swami Shankaranandaji Maharaj in 1960.  Besides his joining centre, he served at Ranchi Morabadi, Jalpaiguri, Baghbazar, Mayavati, Lucknow and Seva Pratishthan centres as an assistant and Shyamla Tal  Ashrama as head.   He had been living a retired life for about twenty years at Deoghar and Barasat centres and at Belur Math.  Guileless, austere and sweet by nature, the Swami endeared himself to all who came in contact with him.