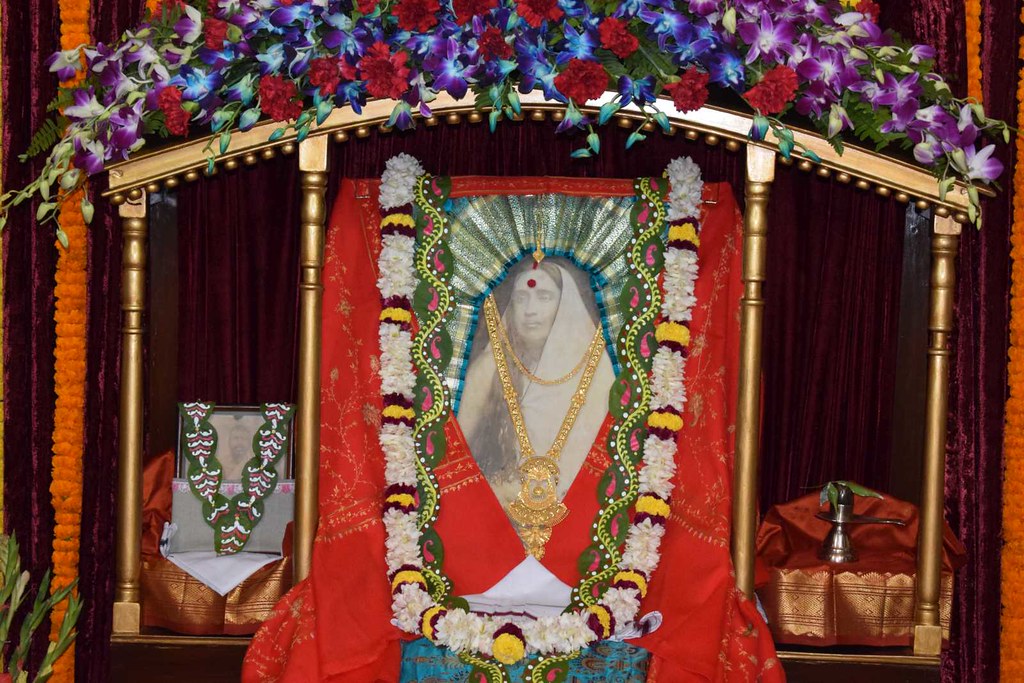 Most Revered  Swami Atmasthanandaji, President, Ramakrishna Math and Ramakrishna Mission, continues to be at Seva Pratishthan.  There is no significant change in his health condition.

Revered Swami Smarananandaji, Vice-President, will be visiting Institute of Culture, Kolkata, on 13 and 14 January, and Bamunmura from 24 to 28 January. He is keeping well.

Revered Swami Prabhanandaji, Vice-President, is scheduled to visit Institute of Culture and Nimpith Ashrama from 2 to 14 January, and Vadodara, Mumbai and Rajkot from 25 January to 5 February. He is in good health.

The 107th Annual General Meeting of the Ramakrishna Mission was held at Belur Math on Sunday, 18 December. Swami Smarananandaji chaired the meeting.  In all, 135 monastic members, 53 lay members and 82 associates attended the meeting. Click here for photos.

The  birthday  of  Holy  Mother  was  celebrated  at  Belur  Math  on  Tuesday,  20  December. Thousands of devotees attended the celebration throughout the day.  Cooked Prasad was served to about 30,000 devotees. Swami Suvirananda chaired the public meeting held in the afternoon. Click here for photos. | Audio | Video |

International Business Council, New Delhi, conferred Indira Gandhi Sadbhavana Award on Ramakrishna Math and Ramakrishna Mission for outstanding achievements.  On behalf of the Math and Mission, Swami Shantatmananda received the award, comprising a memento and a certificate, in a function held in Delhi on 21 December.

Three students of Veda Vidyalaya, Belur Math, secured the first, second and third prizes in three Sanskrit literary competitions conducted by Samskrita Bharati at Varanasi on 11 December. Each winner was felicitated with a medal, a certificate and a cash prize.

Baghbazar Math held a devotees’ convention on 11 December in which 650 devotees took part.

Bengaluru centre held a programme comprising speeches and cultural events on 26 November. Besides, prizes were distributed to the winners of the cultural competitions the centre had conducted earlier for students. In all, about 2900 people attended the programme.

Chennai Math conducted a short story competition in which 700 people took part.  Prizes were distributed to the winners on 20 December.

Dhaka (Bangladesh) centre held a programme comprising special worship, two public meetings and cultural events, on 23 December which was attended by about 1000 people.  An art competition for children was also held. Click here for full report and photos.

Kankurgachhi Math conducted a seminar on 20 November which was attended by 510 people.

Mymensingh (Bangladesh) centre held a public meeting on 23 December which was attended by about 100 people.

Port Blair centre conducted a self-improvement programme on 3 December in which 450 girls and teachers from different educational institutions took part.

Puri Mission Ashrama held a written quiz competition in which 150 students participated.  The Ashrama also conducted a youths’ convention on 25 December which was attended by about 400 students.

Purulia Vidyapith held speeches, a parade and PT show by the students of the Vidyapith, and cultural programmes on 8 and 28 November.   A devotees’ convention was also conducted on 11 December which was attended by 473 people.

Rahara centre, in association with Indian Council of Historical Research, New Delhi, conducted a national level seminar on ‘Sister Nivedita and her contribution to India – a historical perspective’ on 9 and 10 December. Sri Tathagata Roy, Governor of Tripura, Mr Brian McElduff, Ireland Ambassador to India, and many other dignitaries addressed the audience.   About 1000 people took part in the seminar.

Sarisha centre held a public meeting on 25 December which was attended by 205 devotees.

Swamiji’s Ancestral House held two lectures at the centre on 28 November and 14 December which were attended altogether by 1050 people.  On the centre’s initiative, seven public meetings were held in and around Kolkata from 27 November to 17 December.  In all, about 3100 people attended the meetings.

Thiruvananthapuram centre held a lecture series on Sister Nivedita from 21 to 24 September. The centre also conducted a programme on 28 October in which some distinguished people spoke. It was attended by about 200 people.

Vadodara centre conducted a youths’ convention on 25 December in which 150 youths took part.

Varanasi Home of Service held a music programme on 25 December which was attended by 250 people.

Advaita Ashrama, Kolkata, launched a new website <shop.advaitaashrama.org> on 1 December for online sale of books and other materials. The site was launched by Revered Swami Bodhasaranandaji Maharaj. The site presently catalogs our books and media for sale to customers in India, who may purchase using their credit/debit card or digital wallets or by net banking. Customers outside India can at present make their selection and send us Price Quote request. The site is responsive enabling customers to browse and purchase even from hand-held devices. The site also uses SSL encryption to protect customers’ privacy.

The name of Almora centre’s locality has been changed from Bright End Corner to Vivekananda Corner.  So, the address of the centre is now :

Rajkot centre organised ‘Swami Vivekananda Janma-Jayanti Spardha, 2016’ (Group Song, Fancy Dress, Recitation, Elocution & Drawing) in the Ashrama premises from 8 to 21 December 2016. In these competitions over 8,000 students participated from 160 schools and colleges of Rajkot city, out of which 744 were awarded with different prizes. Click here for photos.

Calcutta  Students’ Home,  Belgharia,  held  the  concluding  phase  of  its  year-long centenary celebration from 24 to 26 December with public meetings, cultural programmes and narayana seva (feeding  poor  people).   The  General  Secretary  presided  over  the  public  meeting  held  on  25 December.  A good number of monks, hundreds of devotees, and about 300 alumni attended the celebration.

As a part of the first phase of its centenary celebration, Garbeta centre held a six-day programme from 16 to 21 December which included a devotees’ convention, a fair, an exhibition on the Holy Trio and a colorful procession. Thousands of people attended the programmes.

Two teams representing Tamil Nadu state, which had two students of Coimbatore faculty centre of Vivekananda University, won the under-19 and above-19 national level football tournaments conducted by the Rural Games Federation of India at Meerut from 9 to 13 November.  The teams also won the Rural Games International Football tournaments held at Bhutan from 1 to 4 December.

The newly constructed kitchen-cum-dining-hall on Babupara campus of Imphal centre was inaugurated on 8 December.

A student of Katihar school secured the gold medal at the state level weightlifting competition conducted by Art, Culture and Youth Department, Government of Bihar, at Sitamarhi on 7 and 8 September.

Another  student  of  Katihar  school  stood  first  at  the  state  level  in  a  painting  competition conducted by Petroleum Conservation Research Association (PCRA), Ministry of Petroleum and Natural Gas, Government of India.   He also participated in the national level competition held at Delhi on 23 December and was awarded a certificate of achievement and a wristwatch.

The  Telegraph  Education  Foundation  presented  the Award  for  Excellence  in Academics  to Narendrapur Vidyalaya in a function held in Kolkata on 26 November.

Indian Adult Education Association, New Delhi, awarded Nehru Literacy Award, 2014, to Lokasiksha Parishad of Narendrapur Ashrama for its contribution to adult literacy.  Sri Ram Naik, Governor of Uttar Pradesh, handed over the award, comprising a plaque and 21,000 rupees in a function held at Lucknow on 5 December 2016.

Twenty-one students of class 11 of Narendrapur Vidyalaya who participated in the Junior Scholarship Test, 2016, conducted by Jagadish Bose National Science Talent Search, Kolkata, were awarded junior scholarship and 10 others received junior encouragement award.   Besides, the school won the Best School Award for the excellent performance of its students in the competition.

Ranchi Morabadi centre conducted an eye care programme from 21 November to 17 December in which eye check-up of 2212 children and 166 adults was done and 21 patients were operated upon for cataract.

On 18 December, Rajamahendravaram (Rajahmundry) centre conducted a free medical camp at Rampachodavaram, a place mostly inhabited by tribal people. A team of 15 doctors, including a few specialists, treated 423 patients.

On 9 December 1916, Swami Brahmanandaji Maharaj had laid the foundation stone for the temple at Nettayam sub-centre of Thiruvananthapuram Ashrama.  In commemoration of that event, the Ashrama held a five-day spiritual retreat programme from 9 to 13 December 2016 in which about 100 devotees took part.

In commemoration of Swami Vivekananda’s nine-day visit to Thiruvananthapuram in 1892, Thiruvananthapuram Ashrama celebrated Viveka Navaratri from 13 to 21 December by holding programmes at the centre and some other places in the city. A large number of people attended the programmes.

On 23 December, Kanpur centre conducted a seminar on values in teaching profession in which about 250 principals, teachers and teacher-trainees took part.

Delhi centre held a values education programme on 29 and 30 November in which 160 school teachers were trained.

Vadodara centre conducted a programme on 7 December in Gandhinagar which was attended by 150 students. The centre also conducted a blood donation camp on 18 December in which 21 people donated blood.

Vrindaban Sevashrama conducted a urology camp from 23 to 28 November in which 14 specialist doctors checked 321 patients and performed 119 surgeries.

As  a  part  of  the  third  phase  of  Swachchha  Mangaluru,  Mangaluru  Ashrama  conducted 65 cleaning drives in and around Mangaluru on four Sundays between 4 and 25 December.  In all, about 7000 volunteers participated in these drives. Click here for photos.

Varanasi Home of Service carried out a cleanliness drive on 18 December in which 50 people took part in cleaning public streets around the centre. A rally, attended by 350 people, was also taken out to create awareness about cleanliness.