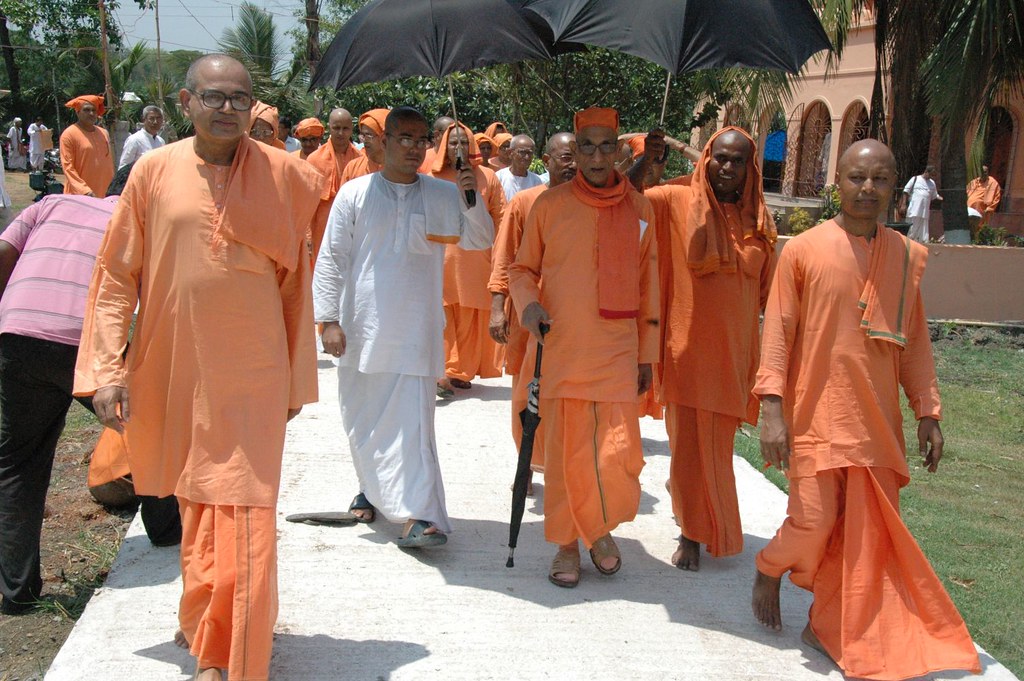 The health condition of Swami Atmasthanandaji, President, Ramakrishna Math & Ramakrishna Mission, is now stable.  Ventilator support, which had been provided to him on 27 April, was withdrawn on 6 May.  He continues to be at Seva Pratishthan hospital in Kolkata.

Swami Smarananandaji, Vice-President, will be visiting Narendrapur from 16 June to 4 July.  He is keeping well at Belur Math.

Swami Vagishanandaji, Vice-President, is scheduled to visit Nabadwip and Katwa from 22 to 29 June.  Now at Cossipore Math, he is in good health.

Swami Prabhanandaji, Vice-President, will be visiting Gol Park and Antpur centres from 13 to 29 June.  He is keeping well.

Vedanta Society of Greater Houston, USA, has been made a branch centre of the Ramakrishna Math.

A branch centre of the Ramakrishna Math has been started at Ramanathapuram (also known as Ramnad) where Swami Vivekananda had stayed on his return from the West in 1897.

The address of the centre is:

Narottam Nagar centre conducted two special lectures on 23 and 25 May.

Swami Vivekananda’s Ancestral House and Cultural Centre, Kolkata, held a lecture on 20 May which was attended by 250 people.

On 4 May, Vadodara centre held its inaugural programme to commemorate Sister Nivedita’s 150th birth anniversary.  Swami Gautamanandaji among others addressed the gathering.

Visakhapatnam centre launched a written quiz competition on Sister Nivedita for school students on 1 May.  Bhagini Nivedita, a Bengali film dubbed into Telugu, was also released on that day.

Postal Address: The Postal Index Number (PIN) of Muzaffarpur centre has been changed to 842002.

Websites: Barisha Math has launched a website with address <www.rkmbarisha.org>. 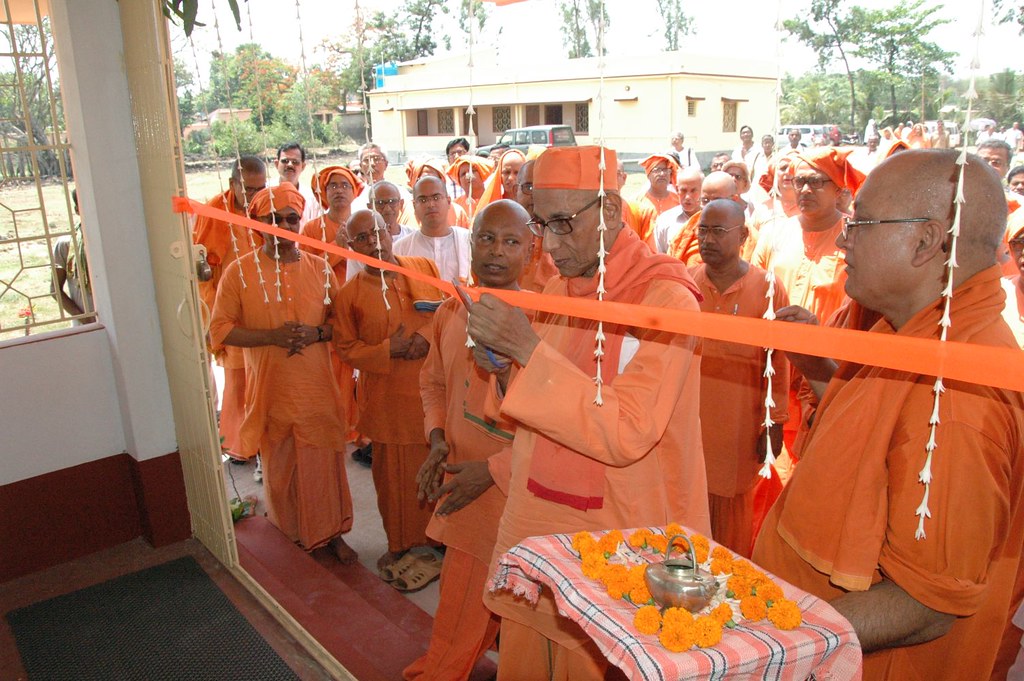 The newly built teachers’ quarters at Narottam Nagar centre was inaugurated on 9 May, the holy Akshaya Tritiya day.

The newly setup physiotherapy unit at Ghatshila Ashrama’s dispensary was inaugurated on 11 May.

The newly built shrine storeroom (Thakur Bhandar) at Sikra Kulingram centre was inaugurated on 26 May.

Shyamla Tal centre held the concluding function of its centenary celebration on 26 and 27 May with special worship, lectures and bhajans.  Swami Suhitanandaji, General Secretary, Ramakrishna Math & Ramakrishna Mission, about 40 other monks, 80 devotees and 900 villagers attended the programme. [Click here for photos] 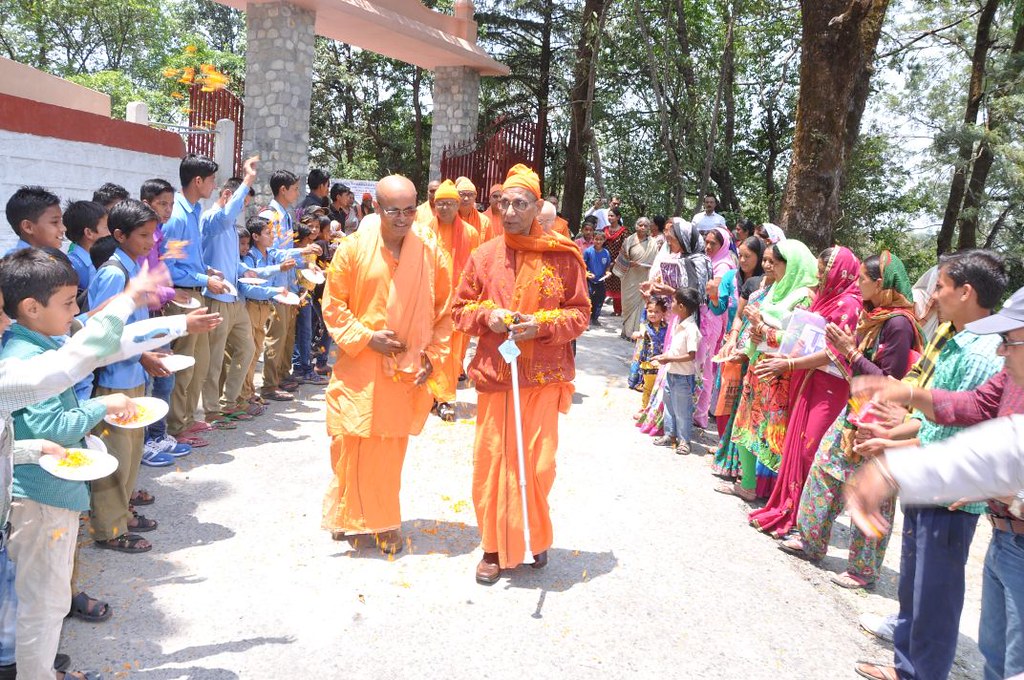 Eight students of the faculty of General & Adapted Physical Education and Yoga (GAPEY) of Vivekananda University’s centre on Coimbatore Mission campus participated in the 3rd National Youth Rural Games and Sports Archery Tournament organized by Youth Rural Games and Sports Federation of India on 10 May.  They won 3 gold medals, 2 silver medals and 3 bronze medals, and also the overall national championship.

Seva Pratishthan conducted a diabetes camp on 7 April, the World Health Day, in which 317 patients underwent blood sugar examinations and other tests.  An illustrated booklet on diabetes was also given to all the patients.

Ranchi Morabadi centre conducted an eye care programme from 25 April to 19 May in which eye check-up of 539 children and 432 adults was done; 10 patients were operated upon for cataract.

Vadodara centre conducted a blood donation camp on 29 May in which 20 people donated blood.

Kamarpukur centre carried out its sixth cleanliness drive on 22 May in which 67 people, including monks, employees and volunteers, cleaned a market area and a few streets in and around Kamarpukur.

Mangaluru centre conducted four cleanliness drives in different areas of Mangaluru city in the month of May involving about 500 people.

Nagpur centre took out a rally in Dhantoli area on 6 April to create awareness about cleanliness.  About 200 people, mostly children, took part in the rally.  As a part of the rally, the children enacted a street play.

Delhi centre conducted eight values education workshops for school principals and teachers from 3 to 25 May which were attended by 420 people in all.

Rajkot Ashrama held 19 values education programmes for school children from 4 January to 29 March.  In all, 3758 students from 19 schools took part in these programmes.  The centre also conducted two two-day residential camps for the youth in January and February in which 100 students from 2 colleges participated.

Silchar centre conducted a two-day values orientation programme on 24 and 25 May in which 208 students and 60 teachers from 35 schools took part.

News of Branch Centre (Outside India)

A student of Swami Vivekananda College of Fiji centre won a bronze medal in the shotput event at the National Level Athletics Competition.