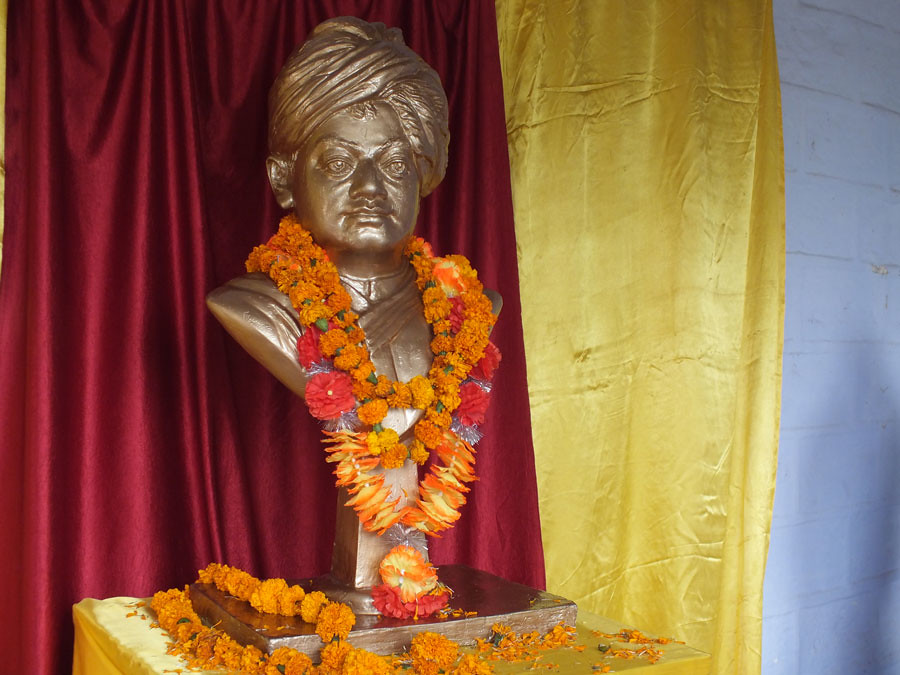 Swami Atmasthanandaji, President, Ramakrishna Math & Ramakrishna Mission, continues to be at Seva Pratishthan hospital in Kolkata.  Sri Narendra Modi, Prime Minister of India, paid a visit to him at Seva Pratishthan on 17 April.  On 20 April the double J stent in the left ureter of Swami Atmasthanandaji had to be replaced.  After that, he developed fever owing to infection in chest and urinary tract.  On 27 April he was put on ventilator.  His health condition is now critical.  He is under the care of a team of specialist doctors.

Swami Smarananandaji, Vice-President, will be visiting Barasat and Bamunmura centres from 2 to 11 May, and Gol Park centre from 20 to 28 May.  He is keeping well at Belur Math.

Swami Vagishanandaji, Vice-President, is scheduled to visit Katwa in Burdwan district on 10 and 11 May, and Sikra Kulingram from 24 to 28 May.  Now at Cossipore Math, he is in good health.

Swami Prabhanandaji, Vice-President, is scheduled to return to Belur Math on 7 May after his visit to Kankurgachhi Math.  He will be visiting Baghbazar centre from 17 to 29 May.  He is keeping well.

At the request of Sri Ramakrishna Ashrama, Kayamkulam, whose immovable properties already belonged to Ramakrishna Math, Belur, the possession and management of the Ashrama has been taken over by the Math.  The address of this new centre is: Ramakrishna Math, P.O. Kayamkulam, Dist. Alappuzha, Kerala 690502, phone no.: (0479) 2445891 and email id <[email protected]>.

Delhi centre held public meetings on 10 and 26 April in commemoration of the 150th birth anniversaries of Swamis Akhandanandaji and Saradanandaji respectively.

Swami Vivekananda’s Ancestral House and Cultural Centre, Kolkata, held three lectures on 15, 20 and 21 April which were attended altogether by 850 people.

The Government of Jharkhand has started a Kisan Single Window Centre at Getalsud farm of Ranchi Morabadi Ashrama.  Sri Narendra Modi, Prime Minister of India, declared open the centre at a function held in Jamshedpur on 24 April.

A fibreglass bust of Swami Vivekananda was unveiled on 27 April at Thompson House, Almora, where Swamiji had stayed for several days in 1898.  The bust has been installed by the joint efforts of Directorate of Culture of Uttarakhand Government, District Administration of Almora, and our Almora centre to commemorate Swamiji’s several visits to Almora. (image above)

Sri V Shanmuganathan, Governor of Meghalaya, visited Vivekananda Cultural Centre, Shillong, on 27 April and participated in the programme held by the Ashrama to observe the 115th anniversary of Swami Vivekananda’s visit to Shillong.  About 2000 youths took part in the programme.

Three of our colleges in West Bengal, namely Residential College (Narendrapur), Vivekananda Centenary College (Rahara) and Sikshanamandira (Saradapitha), have been conferred the status of “Colleges with Potential for Excellence (CPE)” by the University Grants Commission.  Under CPE scheme funds will be provided to the colleges to improve and strengthen their infrastructure to achieve higher academic standards.

Chennai Students’ Home and Narainpur centres received the ‘Concentrated Solar Thermal (CST) and Solar Cooker Excellence Award 2016’ from the Ministry of New and Renewable Energy, Govt of India, for effectively using CST system for cooking purpose in their institutions.  Sri Piyush Goyal, Minister of State for Power, Coal and New and Renewable Energy, handed over the awards comprising certificates and plaques at a function held in New Delhi on 29 April.

Four students of the hostel attached to Nagpur Math secured the undermentioned awards:

Asansol centre conducted a medical camp at Burnpur on 20 March in which 513 patients were treated by 7 doctors.

On 21 March, about 250 students of the polytechnic of Chennai Students’ Home cleaned the campus of Sri Kapaleeshwarar Temple, Chennai, following an annual festival in the temple.

On 14 April, Chennai Math, in association with Chennai Students’ Home, launched a yearlong programme ‘Our locality, our responsibility’ to promote cleanliness and hygiene at Pattinapakkam in Chennai, a seashore area, which was severely affected by the floods in November 2015.  About 50 students of the polytechnic of Students’ Home cleaned the area on that day.

Coimbatore Mission centre held six cleaning programmes at different public places in the city in April.  Students from the various institutions run by the centre participated in these programmes.

Students of Jamshedpur centre’s school at Sidhgora cleaned their school campus and the surrounding areas on 23 April.

Kamarpukur centre carried out its fifth cleanliness drive on 24 April in which 81 persons, including monks, employees, volunteers and local people, cleaned Kamarpukur Bazar, Dak Bungalow crossing area and some interior places in the village.

Vadodara centre held a talk on cleanliness at a school in Vadodara on 21 March.  The talk was followed by a cleaning programme in which about 500 students participated.

Hyderabad Math held a personality development camp from 11 to 21 April in which 386 students participated.

Kochi Math conducted a personality development and values education camp from 5 to 10 April in which 50 students took part.

Salem Ashrama conducted a three-day residential values education camp from 24 to 26 April in which 203 students from three districts of Tamil Nadu participated.

Email IDs:  The following centres have got new email ids shown against their names: