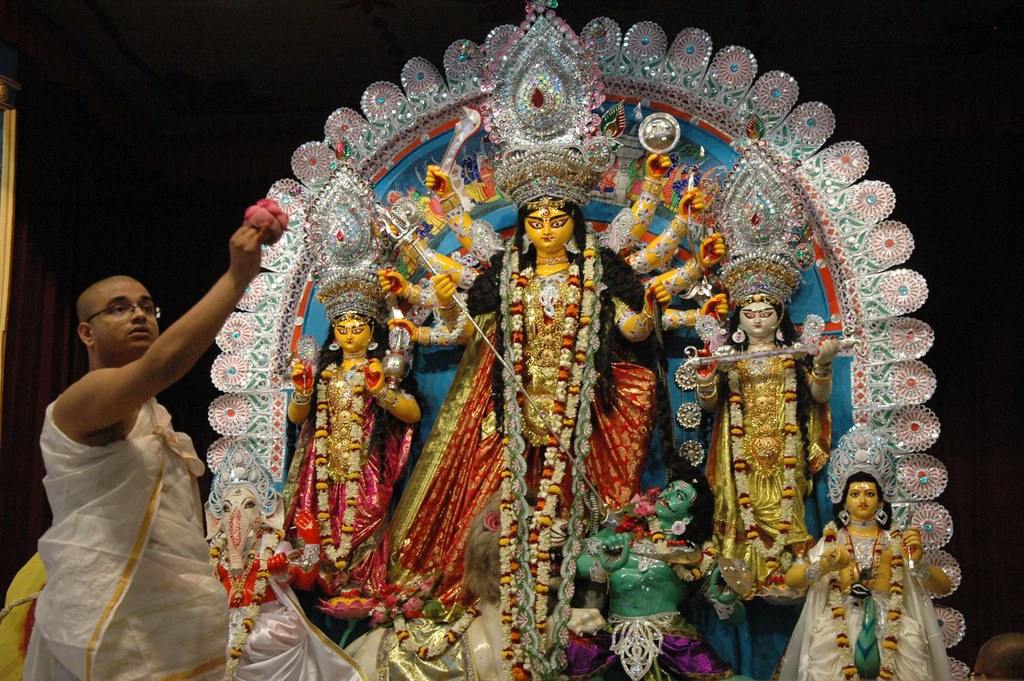 Swami Smarananandaji, Vice-President, is scheduled to return to Belur Math on 12 November after his visit to Gol Park and Kankurgachhi centres.   He will be visiting Baghbazar centre from 23 November to 4 December. He is keeping well.

Swami Vagishanandaji, Vice-President, is scheduled to visit Nagpur from 1 to 9 November, Krishnanagar (Dist. Nadia) from the 16th to 19th, and Barisha from 28 to 30 November. He is in good health.

Swami Prabhanandaji, Vice-President, is scheduled to visit Patna from 1 to 7 November, Medinipur from 13 to 19 November, and Kankurgachhi from 25 to 30 November. He is keeping well.

Durga Puja was celebrated at Belur Math from 8 to 11 October with due solemnity and joy. Ignoring occasional rains, about two lakh devotees attended the Puja to receive the blessings of the Divine Mother. The Kumari Puja performed on 9 October drew huge crowds, and the Sandhi Puja on that day was also attended by many devotees.  Cooked Prasad was served to nearly 45,000 devotees on Ashtami day and to about 1,50,000 devotees during the four days. Click here for photos of Durga Puja celebration at Belur Math.

A new branch centre of the Ramakrishna Mission has been started at Gwalior in Madhya Pradesh. Click here for photos of Gwalior Ashrama. The address of the Gwalior centre is

Swamiji’s Ancestral House held a special programme at Sibpur, Howrah, on 27 September which was attended by about 300 people.

Advaita Ashrama, Kolkata, conducted a youth convention on 21 August in which 350 people participated.  Prizes were distributed to the winners of the cultural competitions the centre had conducted earlier.

Bhopal centre held two talks on Sister Nivedita on 25 and 26 October which were attended altogether by about 1200 people, mostly students.

Gadadhar Ashrama conducted a devotees’ convention on 25 September in which 125 devotees took part.

Jamshedpur centre conducted cultural programmes and competitions in three of its schools on 28 October.

On 28 October, Ponnampet centre held a programme comprising bhajans, speeches and screening of a film on Sister Nivedita. Nearly 200 people attended the programme.

Rajkot centre  conducted  values  education  programmes  at  7  schools  in  Rajkot  which  were attended by about 2000 students.

Visakhapatnam centre conducted a written quiz competition on Sister Nivedita in which nearly 87,000 students from 575 schools in Andhra Pradesh and Telangana participated.  The final round of the competition was held on 28 October. About 2000 prizes were given away to the winners.

Swamiji’s Ancestral House held a cultural programme on 1 October which was attended by about 500 people.  On the centre’s initiative, two programmes were held at Kolkata and Chinsura on 23 and 28 September. In all, 650 people attended the programmes.

Florida (USA) centre held lectures, cultural programmes and screening of a film on Sister Nivedita on 22 and 23 October.

The High School attached to Vijayawada centre celebrated its golden jubilee on 2 October. Swami Gautamanandaji presided over the programme in which Sri N Chinarajappa, Deputy Chief Minister of Andhra Pradesh, and others took part. Click here for photos and report.

Chandigarh centre conducted two programmes for senior citizens on the subject ‘Leading a purposeful life in old age’ in Panchkula (Haryana) and Chandigarh on 15 and 16 October respectively.  A total of about 50 senior citizens participated in the interactive programmes.

The newly set-up X-ray and pathology laboratory facilities at Cooch Behar dispensary were inaugurated on 4 October.

At Coimbatore Mission centre, the year-long platinum jubilee celebration of TAT Kalanilayam Middle School and diamond jubilee celebrations of Maruthi College of Physical Education, Polytechnic  College  and  Institute  of  Agriculture  and  Rural  Development  were  inaugurated  on 3 October.   Besides, the newly constructed buildings for Fitness and Sports Sciences Resource Centre and TAT Kalanilayam Middle School were inaugurated on 3 and 4 October.

A student of Coimbatore Mission centre won the gold medal in Junior Boys category of the State Archery Championship held by Tamil Nadu State Archery Association on 9 and 10 October.

Hyderabad Math held a special lecture programme on 22 October in which about 800 teachers took part.

Khetri centre held a programme on 16 October to celebrate the birthday of Swami Vivekananda’s disciple Raja Ajit Singh of Khetri.  About 50 people attended the programme.

Kochi centre distributed 50 saplings and held a talk on 16 October.

Medinipur centre conducted a free medical camp on the premises of a school in a backward area in Paschim Medinipur district, on 2 October.  Eleven doctors, including two pediatricians, one gynecologist and one dentist, treated 760 patients.

On the occasion of Navaratri festival, Pala Math held cultural competitions in October. About 140 students from different schools and colleges participated in the competitions.

On 16 and 17 September, Khetri centre, in collaboration with Delhi centre, conducted a Teachers’ Training programme at Jhunjhunu town on values education.   In all, 74 teachers of 38 government schools of Jhunjhunu district took part in the programme.

Ranchi Morabadi centre conducted a training programme on rural development for youths from 16 to 30 October, in which 46 people took part.

Silchar Ashrama  conducted  two  youth  conferences  on  30  September  and  1  October  in  which 880 students and 104 teachers from 65 schools and colleges participated.

Vadodara centre held a programme on 15 October which was attended by 200 students.

Almora centre has taken up cleaning of nearly one kilometer stretch of a public road in Almora every Sunday with the help of local people.

Ranchi Morabadi centre held a special programme on 22 October at Baridhi village in Ranchi district to create awareness about cleanliness.  The programme consisted of oath-taking, planting of saplings and a transect walk.   Sri Sudarshan Bhagat, Minister of State for Agriculture & Farmers Welfare, Government of India, and several other dignitaries attended the programme.

Vadodara conducted two cleanliness drives in Vadodara and a village in Vadodara district on 2 October. On the same day about 90 sweepers of Vadodara municipality were felicitated.

Durga Puja (in image) was performed in Durban centre, and its sub-centres at Chatsworth and Pietermaritzburg, Mauritius Ashrama and the following 12 centres in Bangladesh: Baliati, Barisal, Chittagong, Comilla, Dhaka, Dinajpur, Faridpur, Habiganj, Jessore, Narayanganj, Rangpur and Sylhet, and also at the Narail sub-centre of Jessore Ashrama. Click here for photos of Durga Puja at Dhaka.

The renovated dining-hall at Dhaka centre was inaugurated on 2 October.

We are sorry to announce the passing away of four of our brother-monks.