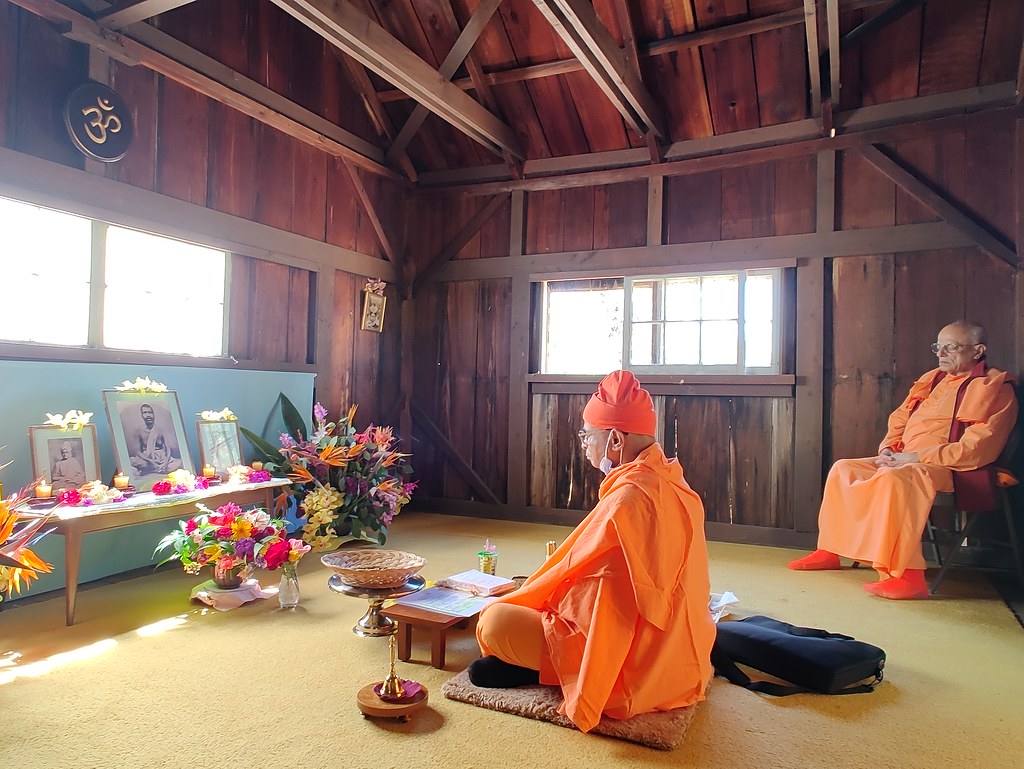 April 30, 2022: After a delay of several years, caused by the coronavirus epidemic, the Vedanta Society of Northern California, San Francisco was again able, this year, to hold the annual gathering at Shanti Ashrama and remember the great disciples of Sri Ramakrishna who, in the early decades of the twentieth century, established and developed that retreat. The program attracted a large number of devotees from different parts of the country.

The program this year started with the usual morning formal worship of Sri Ramakrishna, Holy Mother, and Swami Vivekananda in the meditation cabin and was followed by devotional music, lectures, flower offering reading from scriptures, historical introduction, and tours to different holy spots of the Shanti ashrama by the devotees. The program was a full-day event and was attended by the Swamis of Berkeley and Sacramento Vedanta Societies.

After the tours, the afternoon program consisted of beautiful and inspiring devotional music performed by several musicians, both professional and lay, which in that serene and holy atmosphere contributed to the naturally sweet and charming atmosphere of that holy place.

In the interval since the previous celebration, the valley where the Ashrama is located had been submitted to a disastrous forest fire caused by a series of severe summer lightning strikes. That fire penetrated the Ashrama and, though it consumed some of the hillside forests, the cabins, and their surrounding areas were left intact, mainly through two interventions. The centre had, previous to the onset of the dry season, followed their usual practice of mowing and removing grass from the area around the cabins, and in addition, someone, a neighbour or one of the firefighters had used a large bulldozer to scrape bare a wide circular area of ground around each of the cabins.

The valley, in which the ashrama is situated, is known historically to be periodically submitted to fire and some of the few neighbours in that valley, who have lived for generations in that area have developed skills in firefighting, such as the setting of counter-fires on their properties to halt the advancing flames (literally fighting fire with fire). They employed these techniques on their properties this time also.

In the meantime, the centre has contacted local authorities and fire prevention experts and has, following their suggestions, employed techniques and methods, such as screening to prevent embers and flames from reaching flammable areas of buildings.

The land itself, however, easily recovers from these events. Some of the local trees still show marks from the fire of the early 1950s that actually destroyed many other cabins, including one that was, in those days, used by a permanent caretaker.