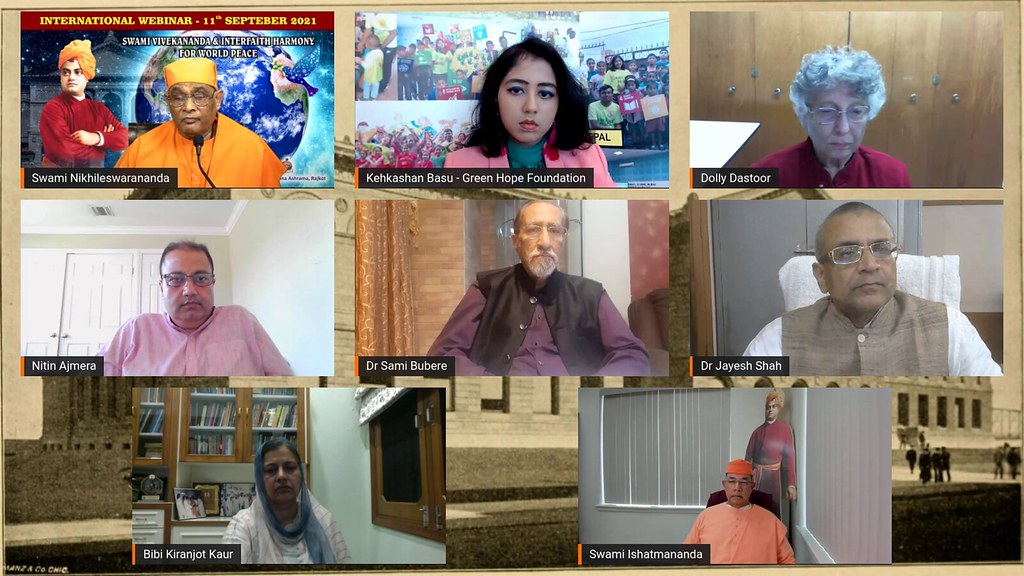 The program started with Vedic Chanting by Swami Shankareshananda of Shri Ramakrishna Ashrama, Rajkot and was followed by the welcome address by Swami Nikhileswarananda, Adhyaksha, Shri Ramakrishna Ashrama Rajkot. Swami Nikhileswarananda explained the relevance of the message of Swami Vivekananda of interfaith harmony and the importance of organizing the programs like this where religious scholars from all faiths can discuss the issues like the harmony of all faiths, eradication of religious fanaticism, bigotry and fundamentalism.

Swami Suvirananda ji Maharaj, the General Secretary of Ramakrishna Math and Ramakrishna Mission, Belur Math, Howrah (WB), India in his benedictory address said that Swami Vivekananda’s message was the message of harmony and peace. Swamiji was a great harmonizer of East and West.

Ambassador Vishal Sharma, a permanent delegate of India to UNESCO said that the Interfaith seminars and webinars like this are sources of renewed strength and encouragement to give rise to a new world and to walk on the path of peace as shown by Swami Vivekananda.

Swami Sarvasthananda, Minister-in-charge, Ramakrishna Vedanta Centre, UK said that Swami Vivekananda explained the doctrine of the harmony of religions and we should understand it in the spirit of acceptance and peaceful co-existence rather than mere tolerance and we should try to see unity in diversity.
Cardinal Oswald Gracias, Archbishop of Bombay and President of Catholic Bishops Conference of India, Mumbai quoted a portion of the speech of Swami Vivekananda’s address at the World’s Parliament of Religions and said that we have used our religions as tools for division rather than of unity. There is so much common in all religions and this was intuitively seen by Swami Vivekananda.

Swami Sarvapriyananda, Minister-in-charge, Vedanta Society, New York explained how Swami Vivekananda’s idea of acceptance of all religions works. He said that all religions are concerned about the ultimate reality and we call it by different names. They refer to the same reality, though the expressions may vary.
Ms. Kehkashan Basu, Founder-President of Green Hope Foundation, Canada and the youngest trustee of the Parliament of World’s Religions said that Swami Vivekananda gave a clarion call of peace and harmony and we need to be together to come out stronger.

Dr. Sami Bubere, President World Peace Council (India chapter) & Founder Sec-Gen World Sufi Parliament said that he is much impressed by the message of Swami Vivekananda of world peace and interfaith harmony and said that the teachings of the Koran mention that we, human beings are part of the family of God.

Bibi Kiranjot Kaur of the Sikh community and a Senior Member of SGPC, Amritsar, explained that unless religious people understand that religion is not confined to the place of worship, the four walls of a house, but is an intrinsic part of human beings and should reflect in every thought and action of a person, the world peace will remain a distant dream.

Dr. Jayesh Shah, Ambassador of the Parliament of World’s Religions, Vadodara said that before starting interfaith dialogue all should be open-minded. He emphasized the idea that the world cannot have peace until nations and people begin to reduce their selfish desires.

Lastly vote of thanks was proposed by Swami Medhajananda which was followed by concluding remarks of Swami Nikhileswarananda. He quoted a portion of the speech of Swami Vivekananda’s address at the World’s Parliament of Religions at Chicago.

Summer Camp for children: Rajkot, May 2022