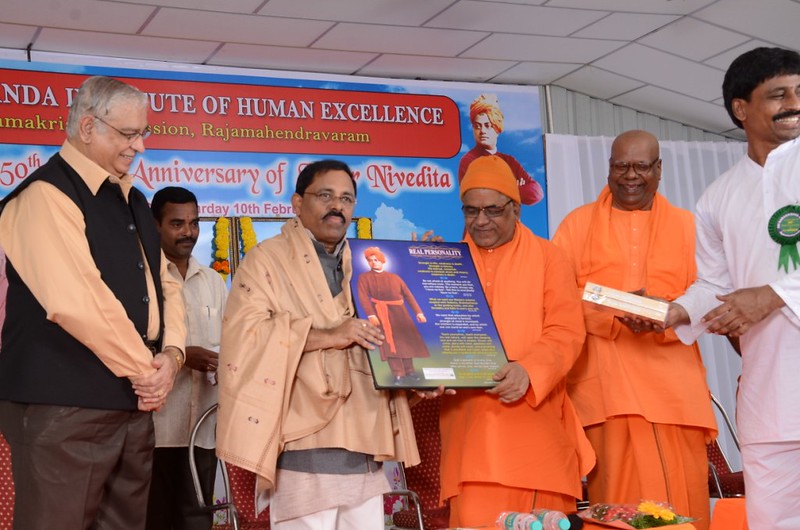 The Programme began with garlanding of the statue of Swami Vivekananda at Vivekananda Circle near Kambala Tank. The Viveka Sopanam the metal staircase constructed to facilitate garlanding of Swamiji’s statue was opened by Revered Swami Kapalisananda, Secretary, Ramakrishna Mission, Rajamahendravaram.  The Programme was attended by Swami Guneshananda, Swami Harikripananda, devotees and students. The donors of the Viveka Sopanam were felicitated. Swami Guneshananda inspired the students present there by quoting Swami Vivekananda and urged them to ‘Arise Awake and stop not till the goal is reached’. The remaining programme continued in the auditorium at the Math premises. The Programme commenced with lighting of the lamp by Swami Abhiramananada, Swami Kapalisananda, Swami Guneshananda and dignitaries on the  dais followed by Prayer & Vedic Chanting by students.

Swami Kapalisananda in his welcome address welcomed the gathering and explained the main idea behind conducting this Youth Convention. He stressed the need to prepare youth to live in the modern world without forgetting their moral and spiritual values. The Chief Guest Vice Chancellor Prof. M. Mutyalu Naidu in his inaugural address spoke at length on the  greatness of Swami Vivekananda and also added that we should never forget the service rendered by Sister Nivedita to India.

Dr. K. S. Ratnakar, Director, Global Hospitals, Hyderabad spoke on the topic ‘From Inertia to Initiative’. He said that the rise or ruin of any society depends on its prevailing education system. Concentration, Courage and Confidence are the essential qualities needed for a student to progress and move form Inertia to Initiative.

Swami Abhiramananda Maharaj in his presidential address stressed the role of the education system on the progress of a nation. Both academic and human excellence are needed. Learning should be to know, to do, to live and to be. Mere scoring high marks alone is not education.

In the post lunch session Swami Sevyananda, Ramakrishna Mission, Vijayawada spoke on Meditation – What? Why? How? . Along with an explanation of the what and why of meditation brief guided meditation was also conducted. The foundation and early preparation for meditation comprises in purifying the mind and training it  to rise form animality through humanity to divinity. He urged the students to lead a simple life with high thoughts.

Swami Guneshananda, Ramakrishna Mission, Visakhapatnam spoke on Awareness, Belongingness and Commitment,  the ABC of life. He said study is the austerity or tapas for a student. Observation, discrimination and perseverance must be cultivated.

Swami Harikripananda Maharaj profusely thanked Swami Abhiramananda Maharaj, the speakers and one and all responsible for making the function a success. 1540 students from Junior and Degree colleges, and Professional colleges participated in the convention.