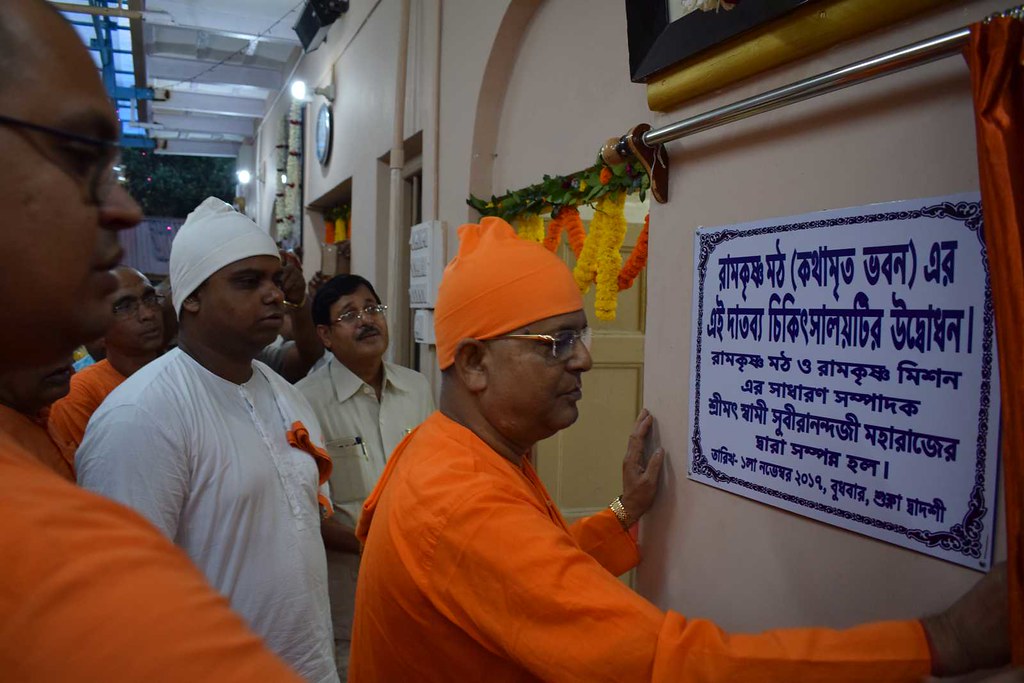 Important developments in the activities of the Ramakrishna Mission during the year 2017-18:

NAAC awarded A++ grade to the College of Education for five years in the second cycle. Also, the college achieved the distinction of being awarded a CGPA score of 82, the highest score awarded so far by NAAC to any college of education in India.

ii) Post Graduate Diploma in Computer Application (PGDCA) course affiliated to Bharathiar University in the College of Arts and Science.

A smart classroom was started in A.T. Kalanilayam Middle School.

NAAC awarded A+ grade to Vivekananda College of Chennai Vidyapith for five years in the third cycle.

Delhi centre distributed 90 LED projectors to the government schools in

Vivekananda Centenary College of Rahara centre was conferred autonomous status by the UGC for six years (from 2017-18 to 2022-23). The centre also started a certificate course in

UGC included RKMVERI (deemed-to-be-university) under section 12B of UGC Act, 1956, thereby making the university eligible to receive grants from

Vijayawada centre added a computer-aided learning facility to its 16 classrooms and added a virtual classroom (for holding interactive online classes).

Visakhapatnam centre started Vivek Institute of Excellence, which conducts life-enhancing courses and programmes mainly for the youth. In the centre’s high school, computer-aided learning facility was added to all classrooms and a virtual classroom was also added.

Under Integrated Watershed Development Programme (IWDP), watersheds covering 6,969 hectares of land in Murhu and Khunti blocks of Khunti district were developed in collaboration with the Ministry of Rural Development. During the reporting period, 45 farm ponds and 43 dobas were excavated for water conservation. Also, 25 trenches and farm bund walls were made on      4 hectares of land. Crop demonstration was carried out on 31.6 hectares of land.

In collaboration with the Govt of Jharkhand, a Seed Village Programme was started, in which farmers in 25 villages were trained in necessary skills and were given inputs to produce paddy seeds. Under this programme, 1,025 quintals of paddy seeds were produced by the farmers of these 25 villages.

Bhubaneswar centre added a first floor to its hostel

The primary school building on Uripok campus of Imphal centre was renovated.

A building for the Educational and Cultural Centre was constructed at Jammu centre.

A kitchen block was built at Malda centre.

New buildings for the diagnostic unit and patients’ recovery unit were constructed at Muzaffarpur centre.

Constructed a fully furnished kitchen in the Vidyalaya.

Puri Mission Ashrama constructed an annexe to the monks’ quarters.

A new building comprising cabins for patients and an ICU was constructed at Vrindaban centre.

Our centres took an active part in the Swachchha Bharat Abhiyan (a cleanliness campaign launched by the Government of India). We are happy to note here the two recognitions won by our centres in the year 2017-18:

Vivekananda College of Chennai Vidyapith secured the third position under the college’s category in the all-India Swachchhata rankings released by the Ministry of Human Resource Development, Government of

The following activities were conducted by our different centres:

Gurap centre cleaned the premises of a

Hatamuniguda centre held a cleanliness drive near its campus.

184 cleanliness drives in and around Mangalore city in which nearly 25,600 volunteers

Four seminars for college youths and one seminar for high school students in which around 2600 students participated.

A workshop for 225 village development officers.

Ranchi Morabadi centre launched cleanliness drives in 117 adopted villages with the help of SHGs and villagers.

Varanasi Home of Service carried out a cleanliness drive.

Important developments in the activities of the Ramakrishna Math during the year 2017-18:

A medical service centre was built at Antpur Math.

A building for the coaching-cum-vocational training centre was constructed at Bagda Math.

A new building to house office and bookstall was built at Barasat Math.

Nattarampalli centre constructed an annexe to the school building.

Chennai Math conducted a cleanliness drive at a government-run rehabilitation centre for Leprosy Cured but Disabled Persons (LCDPs) located at Paranur, near Chengalpattu.

Nagpur Math conducted 25 cleanliness drives in and around The Math also conducted an inter-school Competition on the theme My School – Clean School, to create awareness about cleanliness among the students and teachers.