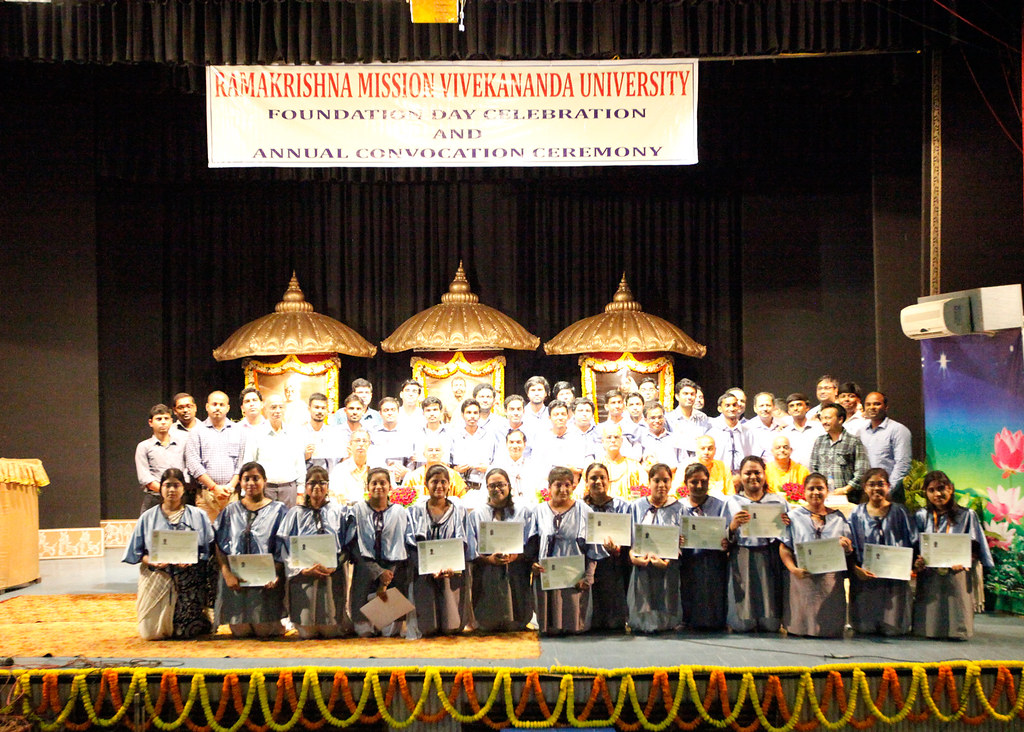 With regard to Ramakrishna Mission & Ramakrishna Math, the following events and achievements during the year under review are worth mentioning:

A student of Aalo school was awarded bronze medal in the International Taekwondo Championship held by Bhutan Taekwondo Federation at Thimphu, Bhutan.

The Headmistress of Model  Higher  Secondary School of Chennai Sarada Vidyalaya received first prize, under the Environmental Protection and Management category, from the Department of Environment, Government of Tamil Nadu.

International Foundation for Environment and Ecology, Kolkata, and Confederation of Indian Universities, New Delhi, jointly conferred Young Scientist of the Year 2016 award on a professor of Botany at Chennai Vidyapith.

A student of Chennai Vidyapith was awarded a scholarship of 37,000 euros (about 26 lakh rupees) by Education, Audiovisual and Culture Executive Agency, a unit of European Union, for pursuing his master’s degree in Nuclear Physics in Europe.

A student of Imphal school won a gold medal in the Asian Cup Jeet Kune Do (a martial art) Championship, held in Thailand by Asian Jeet Kune Do Federation.

A girl student of Narainpur School who stood first in the class 12 examinations 2017 among the students of Narainpur district was awarded Swarna Sharada Scholarship instituted by the IBC-24 news channel.

The football team (under-17 group) of Narainpur School won the state-level Subroto Cup Football Championship in the final match held at Dongargarh, Chhatisgarh.

Twenty-two students of class 11 of Narendrapur Vidyalaya who had participated in the Junior Scholarship Test – 2017, conducted by Jagadish Bose National Science Talent Search, Kolkata, were awarded junior scholarship, and four other students received junior encouragement award. Moreover, in the same competition, eight students of class 11 of Rahara School were awarded junior scholarships, and another student received a junior encouragement award. Narendrapur school won the Best School Award and the Rahara school won the second prize for the excellent performance of their students in the competition.

A former student of Divyayan Krishi Vigyan Kendra of Ranchi Morabadi Ashrama, presently engaged in agricultural activities at a village adopted by the Ashrama to make it a model village, was awarded Jharkhand Samman for his efforts in encouraging other farmers to adapt to new agricultural technologies.

An assistant professor of Chemistry in Vidyamandira (Arts and Science College under Saradapitha) was awarded Young Scientist Award 2017 by the Indian Chemical Society, Kolkata.

Following the official cooperation relationship established between Ramakrishna Mission and UNESCO in December 2014, there have been good interactions between the two organizations. In the year 2017-18, our official representatives to the UNESCO participated in the Seventh International Forum of NGOs on the theme “youth and their social impact” held in Riyadh, Saudi Arabia, and a few other meetings and conferences held at the headquarters of UNESCO in Paris, France.