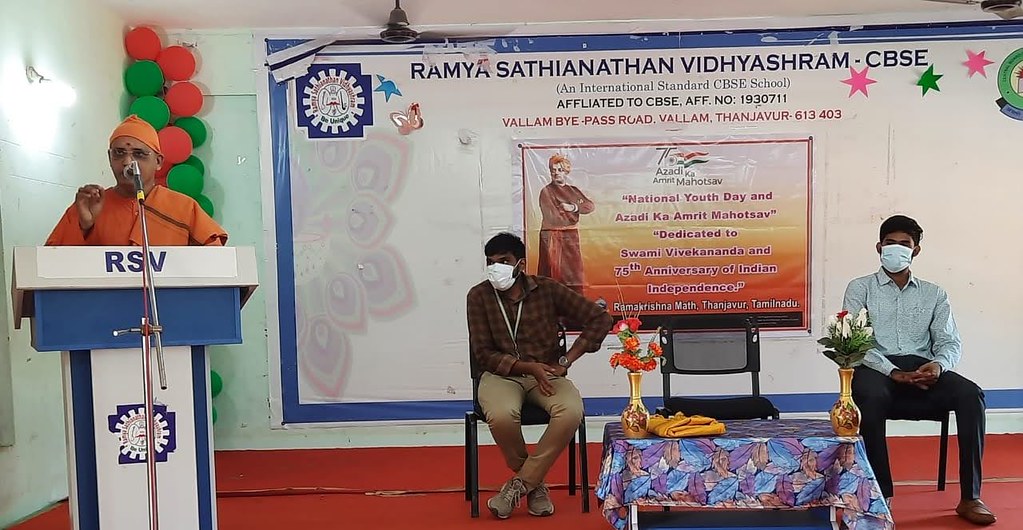 1. A Motivational talk on Swamiji for +1, +2 students in Ramya Sathyanathan higher secondary school in Thanjavur, was held on 11.1.2022 by Swami Vimurtananda. 125 students attended the session, it was a program to motivate school final exam appearing students.

2. In the village and the city centres of the Math, people and students paid floral tributes in the morning and evening to Swami Vivekananda’s picture.

3. Introducing Swamiji to new people – An event by the name “Vivekananda in every home” was conducted at nearly 200 houses in Thanjavur and its suburbs. In all those 200 houses, pictures of Swami Vivekananda were decorated, prayers were done by lighting agarbathis and lamps, and also the householders trained their children to recite some of the golden words of Swamiji.

4. Service to schools – With the help of our volunteers we approached around 25 schools to conduct National Youth day. We distributed pictures and photos of Swamiji for their worship. The reception from the schools was appreciable. Including government schools.

5. Service to youngsters by conducting sports- A volleyball competition among schools was held in Annai Sathya stadium. Around 100 youths had participated in this competition and won prizes. Certificates were issued to all the participants. The District Sports Officer Sri. Antony Athistaraj was the chief guest.

6. In the evening a special discourse titled “Dhyana Siddha Swami Vivekananda” was presented by Swami Vimurtananda at the Math premises.

7. This was followed by a special Musical tribute to Swamiji by Miss Sridharshini.

8. Service to remote village students at Thiruthuraipoondi, Thiruvarur district. Our Math is conducting free tuition centers at three places in Thiruthuraipoondi. By this, 100 children are learning value education and gaining academic knowledge too. On January 12, these students took out procession uttering slogans of Swamiji. Following this, the Math provided new dresses to these children on 13 January.

9. Service to drug-addicted people at Vedaranyam, Nagapattinam district. We sent a motivational letter with the message of Swamiji to a group of people around 45 in number, who are taking treatment for their drug addiction. The letter was read out to them and our volunteers introduced Swamiji to them.

10. Auspicious lamp Puja by women devotees – In our tailoring training unit at Thiruvarur, around 20 women performed lamp Pooja as a part of the birthday of Swamiji along with some cultural programs.