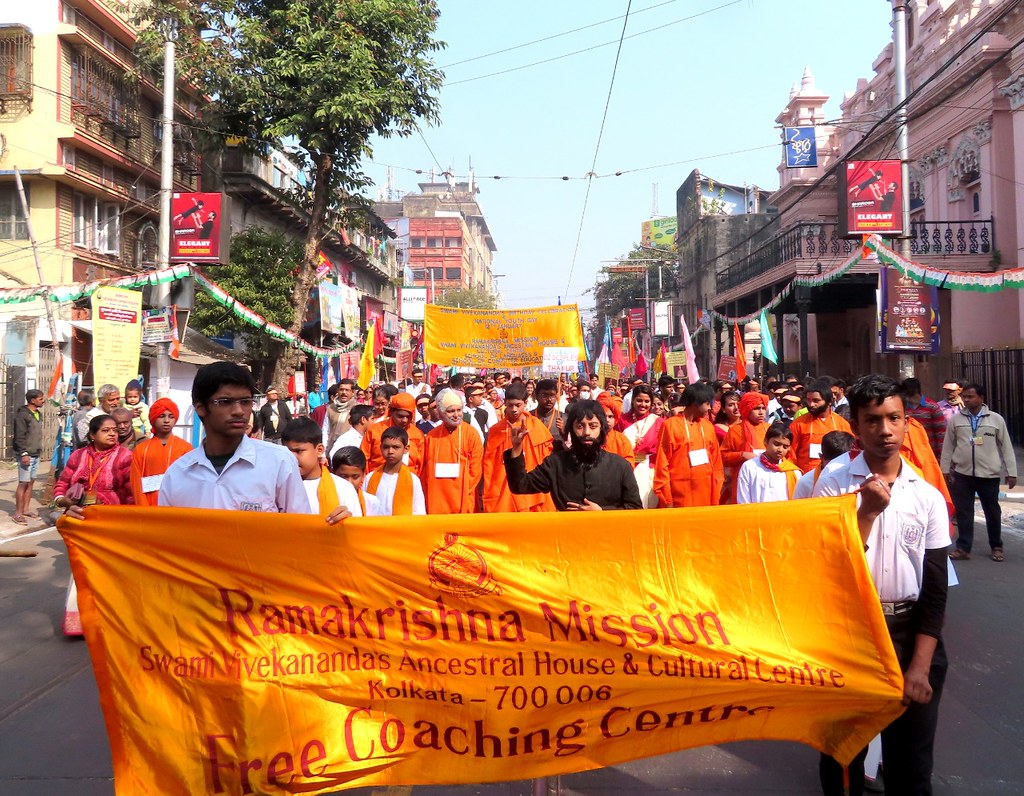 The ceremony was inaugurated on Swamiji’s birthday – 12th January, Thursday at 5.30 am by Mangalarati and followed by devotional songs and bhajan by the monks and devotees. There was a grand colourful procession in the morning comprising of 4000 students, teachers, devotees, admirers, well-wishers and other citizens with well-decorated tableaux, life-size demonstrations of Sri Ramakrishna, Holy Mother Sri Sarada Devi, Swami Vivekananda, Sister Nivedita, and others, and performers of devotional songs, bands, bagpipers, etc.

A cultural programme was organized at the Thakur Dalan of Swamiji’s Ancestral House from 10 a.m. to 8 p.m. The first session of the cultural programme had devotional songs by Sri Aritra Dasgupta & Sri Shubhankar Bhaskar, ‘Vivek-Geeti’ by Swami Shibadheeshananda, Flute recital by Shree Anirban Roy from 10 a.m. to 2:30 p.m. Afternoon session started with a religious discourse presided by Rev. Swami Balabhadranandaji Maharaj, Asst. General Secretary, Ramakrishna Mission, Belur Math, at 3:00 p.m., and other speakers were Swami Jnanalokananda and Sri Shaktiprasad Mishra. This was followed by Shree Sujoy Basu’s Sitar recital and then evening vesper till 6:30 p.m. The day came to an end with one and a half an hour of ‘Bhajan’ presented by Shree Biswarup Rudra till 8 p.m. The entire program was live-streamed through the Youtube Channel of Swami Vivekananda’s Ancestral House and Cultural Centre.