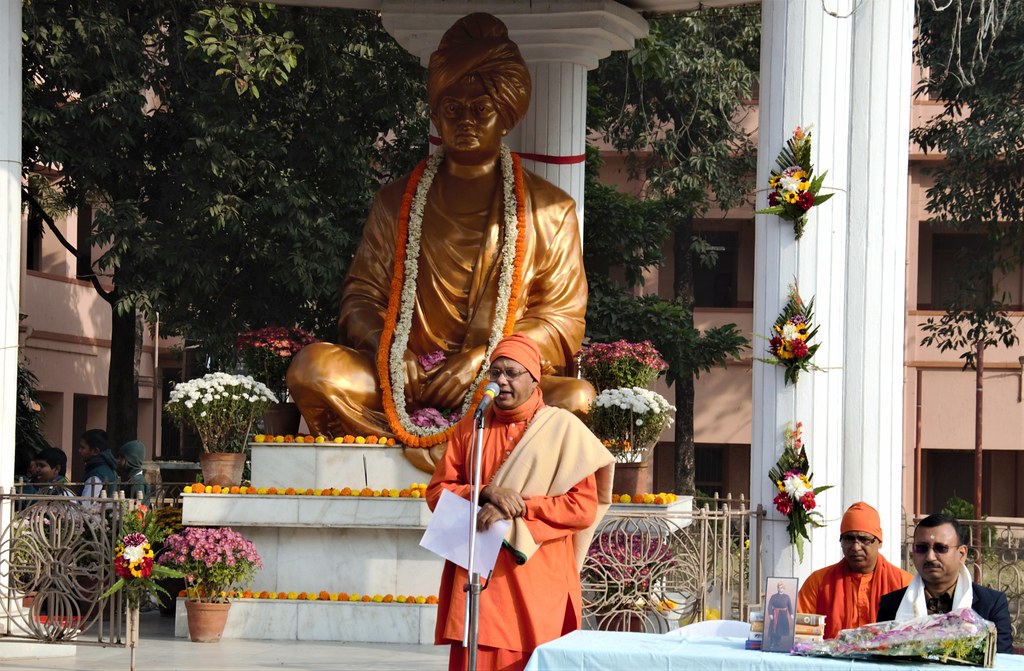 Ramakrishna Mission, Baranagar celebrated National youth day on 12 January 2023. The programme was arranged in the Ashrama premises and about 1500 students of Ashrama-run schools, almost all the teachers and non-teaching staff, the monastic members of the Ashrama and Sri Dhrubajyoti Dey, IPS and the Joint Commissioner of Police, Kolkata, were present at the programme

The programme started at 8.30 a.m. with flag hoisting and offering flowers to Thakur, Maa and Swamiji. The Vedic prayers were chanted by the students of both schools to initiate the celebration. After the opening song, the undersigned delivered the welcome speech and called upon the young generation to follow the ideals of Swamiji and bear the torch of knowledge and wisdom once kindled by this great monk. Sri Dhrubajyoti Dey, IPS, who presided over the programme, reminded the students of the duties and responsibilities that they have to perform to build up a stronger nation as envisaged by Swamiji. Several students from both schools made some cultural performances relevant to the spirit of the celebration.

Swami Mahamritananda, The Headmaster of the Ashrama-run higher secondary School, delivered his speeches to thank the dignitaries and other participants. Thereafter a colourful rally was brought out. The rally included seven tableaus displaying the portraits of the Holy Trio and Sister Nivedita decorated with assorted flowers, the NCC Band, students, teachers, guardians and devotees. Devotional songs and preaching of Swamiji were aired throughout the duration of the rally to make people aware of the importance of the Ramakrishna paradigm. A number of students from both schools, who had been dressed as Swamiji, also participated in it. The rally paved the way from the Ashrama to Udyanbati and came back to the Ashrama. The rally created great enthusiasm among the local people and many of them spontaneously made themselves part of the rally. Sudipta Chakraborty and Taslirn Arif, the teachers of the Ashrama-run Higher Secondary School anchored the entire programme with utmost efficiency.