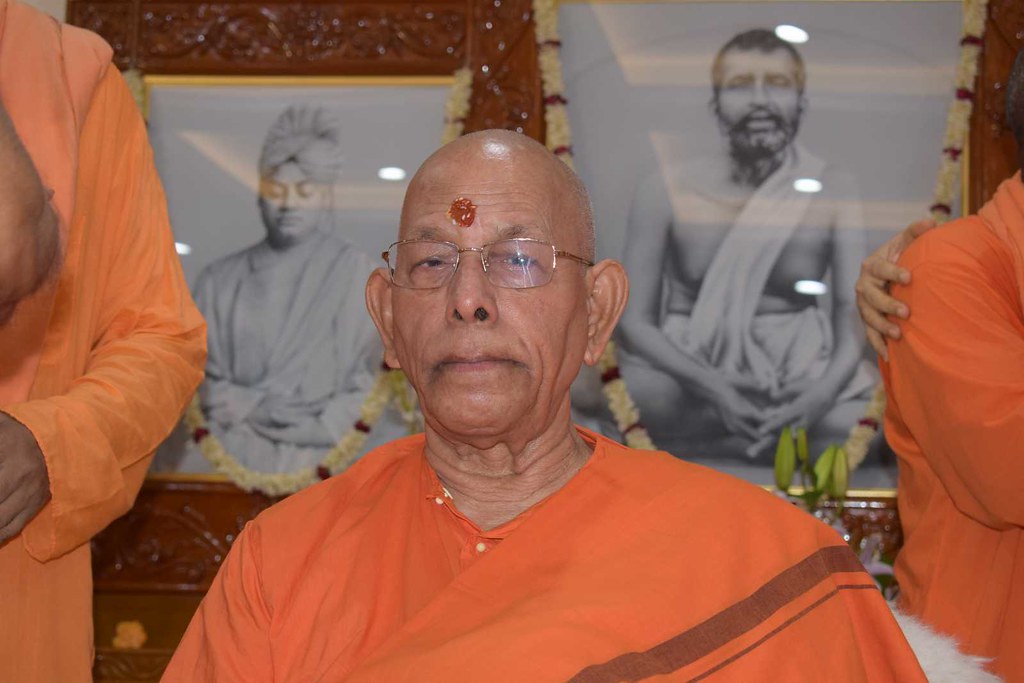 Swami Vagishanandaji Maharaj, Vice-President, will be visiting Belgharia from 6 to 10 August, and Burdwan from 25 to 30 August. He is keeping well at Cossipore Math.

Swami Gautamanandaji Maharaj, Vice-President,  is scheduled to return to Chennai Math on 8 August after his tour of Sri Lanka.  He will be visiting Lucknow, Guwahati, Goalpara (Assam), Cherrapunjee and Shillong from 11 to 30 August. He is in good health.

Swami Prabhanandaji Maharaj, Vice-President, will be visiting Mumbai from 8 to 12 August. He is keeping well.

Swami Shivamayanandaji Maharaj, Vice-President, is scheduled to return to Kankurgachhi Math on 5 August after his visit to Bolpur, Sainthia and Ramharipur.  He will be visiting Port Blair from 16 to 19 August, and some places in Assam from 28 August to 20 September. He is keeping well.

Swami Suhitanandaji Maharaj, Vice-President, will be visiting Sargachhi from 8 to 19 August, and Gurap and Burdwan from 25 August to 8 September. He is in good health.

Swami Vagishanandaji Maharaj inaugurated the newly purchased building adjacent to Ramakrishna Math (Kathamrita Bhavan), Kolkata, on 14 July, the birthday of Sri Mahendranath Gupta (‘M’).  In all, 145 monastic brothers and a good number of devotees attended the programme. Photos of the Inauguration.

Baranagar Mission Ashrama, in association with another organization in Kolkata, held a special lecture and a cultural programme on 16 July.

Cooch Behar centre held a cultural programme on 30 June which was attended by 750 people.

Gurap centre held on 18 June a day-long programme comprising lectures and a sitar recital. The programme was attended by about 500 people.

Kankurgachhi Math held a special lecture on 18 June which was attended by 575 devotees.

Narottam Nagar centre conducted a cultural programme on 16 July which was attended by about 800 people.

Salem Ashrama released a book on Sister Nivedita in Tamil in a function held on 28 July.  About 250 students attended the programme.

Seva Pratishthan held a special lecture on Sister Nivedita on 22 July which was attended by 450 persons.

On the initiative of Swamiji’s Ancestral House & Cultural Centre, three discourses were held in and around Kolkata on 22, 26 and 27 June which were attended altogether by about 1000 people.

Coimbatore Mission Vidyalaya conducted quiz competitions and lectures at three rural schools near Coimbatore on 20 and 22 July. In all, 431 students took part in these programmes.

The Bhava Prachar Parishad office at the Headquarters has got a new email id <[email protected]>.

Vivekananda University has got a new email id <[email protected]>.

Agartala  centre  has  changed  its  website  address  from  <www.rkmmviveknagar.org>  to www.rkmagartala.org

Divyayan Krishi Vigyan Kendra of Ranchi Morabadi Ashrama has been awarded Pandit Deendayal Upadhyay Rashtriya Krishi Vigyan Protsahan Puraskar 2016-17 at the national level by the Indian Council of Agricultural Research.   The award comprising a certificate, a citation and 25 lakh rupees was handed over by Sri Radha Mohan Singh, Union Minister of Agriculture, at a function held in Indian Agricultural Research Institute, New Delhi, on 16 July.  Earlier in March 2017 the institution had bagged the same award at the zonal level. Detailed Report.

Guwahati centre  conducted  a  free  medical  camp  during Ambubachi  Mela  near  Kamakhya Temple from 22 to 25 June in which 4355 patients were treated.

On the sacred occasion of Ratha Yatra, Puri Math conducted a medical camp from 25 June to 3 July in which 607 patients were treated.  The Ashrama also served sharbat (refreshing drink) to 12,000 pilgrims.

Puri  Mission  Ashrama  served  lemonade  to  about  20,000  pilgrims  and  distributed  18,000 pouches of drinking water among them during the Ratha Yatra festival.  In the medical camp organized on this occasion 165 patients were treated.

The football team (under-17 group) of our Narainpur school won the state-level Subroto Cup Football Championship in the final match held at Dongargarh, Chhattisgarh, on 17 July.

The Industrial Training Centre of Narainpur centre received ISO 29990:2010 certificate for a period of three years.

Madurai Math conducted a dental camp on 15 July in which 540 persons had free consultations and check-ups.

The 12th foundation day celebration and the annual convocation of Vivekananda University were held at Narendrapur centre on 4 July. In all, 101 students received their degrees.

Saradapitha held conventions for devotees, teachers and drivers of public transport vehicles on 1 and 2 July to mark the conclusion of its platinum jubilee celebration.

The concluding programme of the year-long platinum jubilee celebration of Vidyamandira (Arts & Science college under Saradapitha), comprising a special lecture and release of a commemorative volume, was held on 4 July.

Dhaka (Bangladesh) centre conducted a homeopathic camp on 24 July in which about 300 patients were treated.

On 22 July, Bengaluru Math conducted a convention on imparting values education to students in which about 100 college lecturers and principals took part.

Delhi centre held 26 values education workshops from 29 June to 29 July which were attended by 1624 principals and teachers. The workshops were held in 8 states apart from Delhi.

Mysuru Ashrama conducted eight cleaning drives and awareness programme between 4 June and 30 July in which a number of volunteers cleaned eight localities of the city. Photos.

Coimbatore Mission Vidyalaya conducted five cleaning drives between 5 and 18 July in which the Vidyalaya students cleaned some public places including a hospital and two government offices.