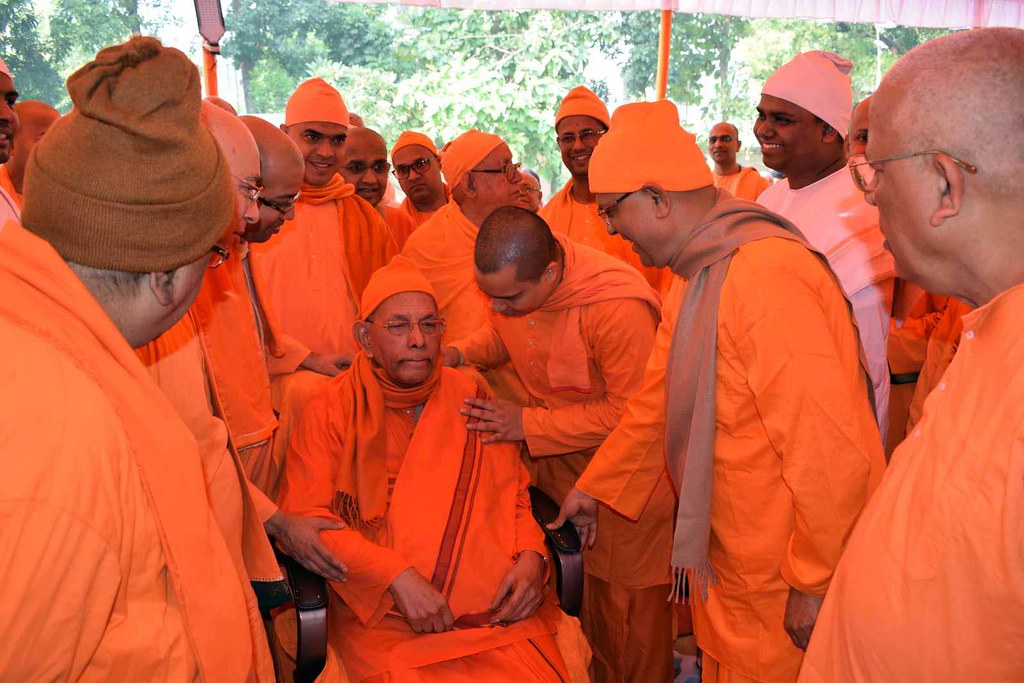 Srimat Swami Gautamanandaji,  Vice-President, is scheduled to return to Chennai Math on 5 December after his tour of UAE, Zambia and South Africa.  He will be visiting Hyderabad, Gulbarga and Bidar (Karnataka) from 13 to 19 December; Konampatti (Tamil Nadu) from 23 to 26 December; and Malliankaranai on 28 and 29 December.  He is in good health.

Srimat Swami Prabhanandaji, Vice-President, is scheduled to return to Belur Math on 3 December after his visit to Rahara.  He is keeping well.

Srimat Swami Shivamayanandaji, Vice-President, will be visiting Sri Lanka, Malaysia, Singapore and Chennai from 10 to 29 December.  He is in good health.

Srimat Swami Suhitanandaji, Vice-President, is scheduled to return to Belur Math on 2 December after his visit to  Bangladesh.  He will be visiting Rajkot from 5 to 7 December; Nabadwip, Sargachhi and Malda from 10 to 23 December; and Baranagar Math from 29 to 31 December.  He is keeping well.

Further, Ramakrishna Math (Kathamrita Bhavan), Kolkata, which was till now directly under the Headquarters, has been made a sub-centre of Shyampukur Bati.

Lokasiksha Parishad of Narendrapur centre has added an additional telephone connection with the number 2427 4300.

The following centres held various programmes to commemorate the 150th birth anniversary of Sister Nivedita.  (The main programmes conducted by them are mentioned against their names.)

Advaita Ashrama, Kolkata: A youths’ convention on 12 November attended by about 250 people.

Allahabad: A meeting on 28 October attended by 150 students.

Chandigarh: A quiz competition on 28 October in which about 1800 students from 16 schools participated.

Chandipur: A students’ convention on 28 October attended by 233 students from 20 schools.

Coimbatore Math: A seminar on ‘Sister Nivedita — Significance of Service’ on 3 November in which about 400 nursing students and 100 devotees took part.

Indore: A public meeting on 19 November attended by about 350 devotees. Report and Photos.

Itanagar: A public meeting on 28 October attended by nearly 100 people.

Jaipur: A spiritual retreat on 12 November attended by about 100 devotees.

Jalpaiguri (in association with Kankurgachhi Math): Lecture programmes at a women’s college and a government office in Jalpaiguri on 16 and 23 November which were attended by nearly 250 people in all. Reports 1 | Report 2

Jhargram: A spiritual retreat on 4 November attended by about 700 people.

Kadapa: Two youths’ conventions on 16 and 17 November which were attended by about 600 men and 800 women respectively.

Kankurgachhi: A meeting on 14 November attended by about 1000 students.

Madurai: A students’ convention on 25 November attended by 115 students.

Manasadwip: A meeting on 28 October in which students of the three schools of the centre took part.  Further, at the initiative of the centre, 32 schools in Sagar Island held various programmes on the same day. Report and Photos.

Nagpur: A students’ convention on 3 November which was attended by nearly 300 students.

Port Blair: A youths’ convention on 19 November and a spiritual retreat on 26 November which were attended by 270 people in total.

Purulia (in association with Bagda Math): Cultural competitions from July to October in which about 11,000 students from 165 schools and 9 colleges participated.  Prizes were distributed to the winners in a programme held on 28 October which was attended by 600 students. A national seminar on Sister Nivedita on 12 September in which 140 people took part.

Salem: Programmes comprising talks, video shows and question-answer sessions for students at five schools in Salem from 18 September to 20 November which were attended altogether by 1333 students.

Sargachhi: A procession, speeches and a quiz competition on 28 October in which about 800 people took part.

Swamiji’s Ancestral House: A lecture at the centre on 8 November which was attended by about 500 people, and eight lectures in and around Kolkata from 23 October to 18 November attended altogether by 3550 people.

Vadodara: A state-level youth convention on 11 November in which 250 youths took part.

Vijayawada: Cultural competitions in which nearly 11,600 students from 166 schools in Andhra Pradesh and Telangana states took part.  Prizes were distributed to the winners in a programme held on 12 November.

Vrindaban: A youths’ convention on 22 November attended by about 200 people. Report and Photos.

Chicago, USA: Public meetings at the University of Chicago and at a public hall in Chicago on 28 and 29 October which were attended altogether by about 400 people.

Singapore: A concert on 5 November in which Sister Nivedita’s life story was depicted in the style of Tamil folk songs using traditional instruments. Report.

As part of its yearlong diamond jubilee celebration, Purulia Vidyapith held a special programme  on 17 October consisting of speeches and cultural events, in which about 100 monks participated.  The centre also held a youths’ convention, a teachers’ convention, a parents’ convention and an alumni meet from 15 to 19 November.  In all, the programmes were attended by about 2000 people.

The first floor of the dispensary building at Cooch Behar Math was inaugurated on 12 November.

A former student of Divyayan Krishi Vigyan Kendra of Ranchi Morabadi Ashrama, presently engaged in agricultural activities at a village adopted by the Ashrama to make it a model village, was awarded ‘Jharkhand Samman’ for his efforts in encouraging other farmers to adapt to new agricultural technologies.  The award consisting of a citation, a memento and one lakh rupees was handed over to him by Sri Raghubar Das, Chief Minister of Jharkhand, in a function held at Ranchi on 15 November.

Two class-nine students of Deoghar Vidyapith secured the first and second positions at the state‑level science seminar contest held at Ranchi by Birla Industrial and Technological Museum, Kolkata, on 1 November.

Indian Rural Volleyball team, having a member from the Maruthi College of Physical Education of Coimbatore Vidyalaya, won the International Rural Volleyball Tournament held in Nepal on 27 and 28 October.

Gwalior centre organized a Yoga Workshop on 26 November 2017 in the Ramakrishna Vidya Mandir school premises where students of 32 schools of Gwalior, teachers and yoga enthusiasts of the city practiced Yoga. Report and Photos.

Guwahati centre conducted a free medical camp at Bamfor village in Morigaon district on 11 November in which 166 patients were treated.

Medinipur centre held a free medical camp on the premises of a school in a backward tribal area in Kharagpur block, Paschim Medinipur district, on 12 November.  Ten doctors, including two paediatricians, a gynecologist and a dentist, treated 1139 patients.

Vrindaban Sevashrama conducted a urology and general surgery camp from 8 to 12 November, in which 11 specialist doctors checked about 300 patients and performed 72 surgeries. Report and Photos.

Kanpur centre conducted a medical camp at Naubasta village in Unnao district on 26 November, in which about 300 patients were treated.

Haripad Math conducted meetings on values education at three schools on 17 and 20 November in which 428 students participated. Report and Photos.

Vadodara centre conducted a values education programme on 3 November which was attended by about 200 students.

Vijayawada centre held two symposia based on the book Personality Development, a compilation of Swamiji’s teachings, on 26 and 27 November in which 250 teachers and 330 students took part. Report and Photos.

Coimbatore Vidyalaya conducted four cleaning drives between 11 and 18 November in which the Vidyalaya students cleaned some public places, including the premises of a school and a government office.

Kamarpukur centre carried out a cleanliness drive at Kamarpukur village on 26 November. 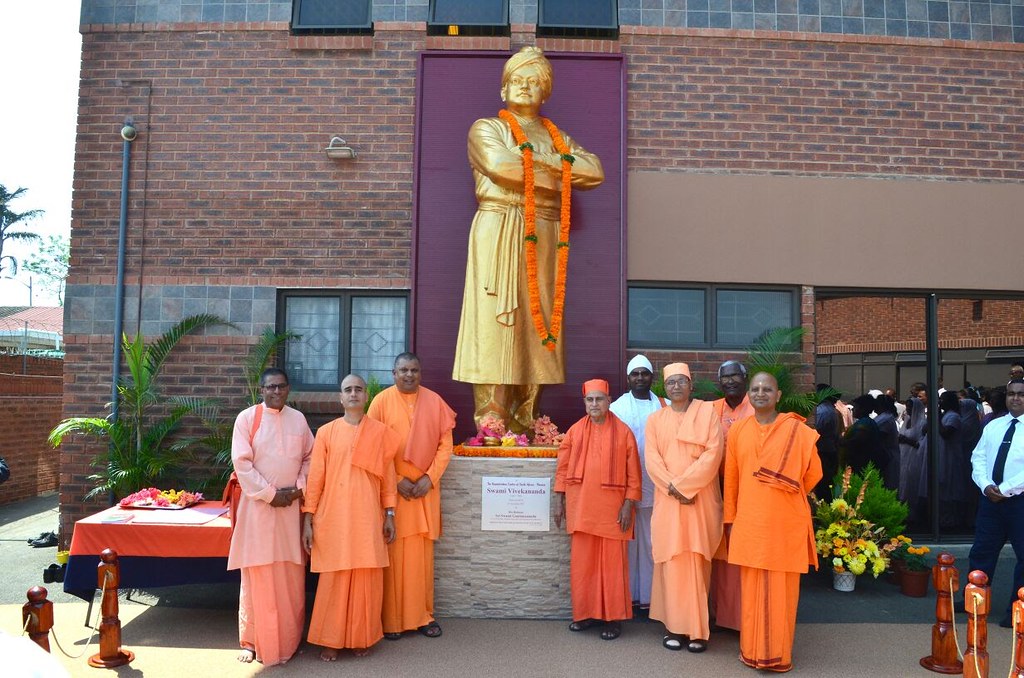 Swami Gautamanandaji unveiled statues of Swamiji installed at the Chatsworth and Phoenix sub‑centres of Durban centre, South Africa, on 18 and 21 November.  He also addressed the programme held at a public auditorium in Durban on 26 November to commemorate Sister Nivedita’s 150th birth anniversary and to mark the conclusion of the centre’s yearlong platinum jubilee celebrations.  The programme was attended by about 1100 people.

Swami Ramachandrananda (Chandrashekhar) expired at a hospital in Kalyani, Nadia, on 12 November at 10.05 pm owing to gastrointestinal hemorrhage.  He was 51 and had been suffering from diabetes and psychiatric problems for some years.  Initiated by Swami Bhuteshanandaji Maharaj, he joined the Order in 1995 at Bhubaneswar centre and had sannyasa from Swami Ranganathanandaji Maharaj in 2005.  He served the Order at Bhubaneswar, Rahara, Antpur, Baranagar Math and Barisha centres.  He had been staying at Belur Math since April 2015 and had gone away a year ago to visit some places.

Swami Jushtananda (Subrata), head of Kailashahar Ashrama, passed away on 19 November at 2 am, on the Ashrama premises, owing to a massive heart attack.  He was 63. Initiated by Swami Vireshwaranandaji Maharaj, he joined the Order in 1979 at Jamshedpur centre and had sannyasa from Swami Bhuteshanandaji Maharaj in 1989.  He served at the Training Centre for about three decades (25 years as an Acharya and 4 years as the Principal).  He also served Swami Nirvananandaji Maharaj for some months.  In April 2015, he was appointed head of the new branch centre at Kailashahar.   He was well‑versed in Sanskrit and scriptures, and translated some principal Upanishads into Bengali.  He was also proficient in puja and enthusiastic in leading kirtans.  Affectionate and cheerful by nature, the Swami was loved by all for his childlike simplicity.

Swami Trivikramanandaji (Sudhangshu Maharaj) breathed his last on 27 November at 5.45 pm at our Vrindaban hospital owing to renal failure.  He was 89 and had been suffering from coronary artery disease for some years.  Initiated by Swami Shankaranandaji Maharaj, he joined the Order in 1953 at Lucknow centre and had sannyasa from Swami Madhavanandaji Maharaj in 1963.  He served the Order at Lucknow centre for five years and at Vrindaban centre for more than four decades (first as an assistant and then as the head).  After relinquishing headship in 2000, he continued to stay at Vrindaban centre as a retired monk, thus clocking up sixty years of stay in Vrindaban at a stretch.  The Swami was known for his austere lifestyle and his extraordinary capacity for physical work.

Celebration of the 150th Birth Anniversary of Sister Nivedita, Moscow