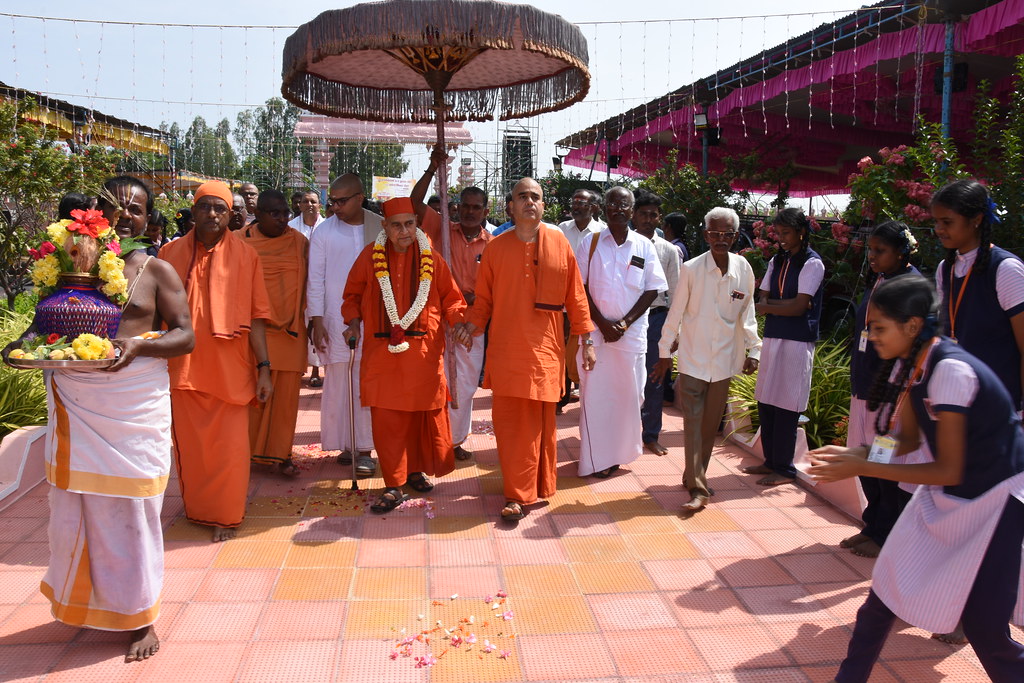 Revered President Maharaj is on a pilgrimage to Kamarpukur and Jayrambati, and will return to Belur Math on 9 December.  He is keeping well.

Swami Gautamananda ji, now at Chennai Math, will be visiting Bhubaneswar, Cuttack and Puri from 3 to 14 December, and Madurai and Salem from 22 to 29 December.  He is keeping well.

Swami Suhitananda ji is in Deoghar.  After visiting Sargachhi, he will return to Belur Math on 13 December.  Later, he is scheduled to visit Rajamahendravaram, Visakhapatnam and Bengaluru from 22 December to 11 January.  He is keeping well.

Swami Girishananda ji is at Belur Math.  He will be visiting Medinipur from 5 to 13 December, and Cooch Behar and Malda from 20 to 31 December.  He is keeping well.

Revered President Maharaj laid the foundation stone for a new building at Belur Math on 7 November, the birthday of Swami Vijnananandaji Maharaj.  The building proposed to come up near the main gate will house a reception desk and a visitors’ room.

In a significant and welcome development, the Headquarters acquired the sacred and historical Alambazar Math in Kolkata.  Alambazar Math, as is well known, served as the second monastery of our order, from November 1891 to February 1898, and is sanctified by the stay of almost all the monastic disciples of Sri Ramakrishna.  The building, however, is in a very dilapidated condition. After the necessary civil works, a branch of the Ramakrishna Math will be started there.

A sub-centre of Ramakrishna Mission, Delhi, was inaugurated at Gurugram (Gurgaon) in Haryana, on 2 November, the day of Jagaddhatri Puja.  The Chief Minister of Haryana Sri Manohar Lal Khattar, Vice-President Swami Gautamanandaji, the General Secretary, 150 monks and 1500 devotees attended the three-day programme from 1 to 3 November held in this connection.  Special worship, homa, public meetings, bhajans and a classical music concert formed part of the inaugural programme.  The address of the sub-centre is “Ramakrishna Mission Vivekananda Institute of Values, Park Hospital Road, Off Sohna Road, Opposite Sispal Vihar, Sector 47, Gurugram, Haryana 122018” and email id: <[email protected]>.

Following the taking over of Sri Ramkrishna Vivekananda Ashram, Sahudangi Hat, a new branch centre of the Ramakrishna Mission has been started there.  The handing-over ceremony was held on 27 November in the presence of 700 devotees.  The address of the centre is “Ramakrishna Mission, P.O. Sahudangi Hat, Dist. Jalpaiguri, West Bengal 735135”, phone number: 86384 78294, and email id: <[email protected]>.  The Ashram was founded in 1959.

Sri Basavaraj Bommai, Chief Minister of Karnataka, presented Amrita Mahotsava State Award to Mysuru centre at a function in Bengaluru on 1 November in recognition of the centre’s service activities.  The award consisted of a citation, a gold medal and a cash prize of five lakh rupees.

As part of its centenary celebrations, Deoghar Vidyapith held a reunion of its former students from 25 to 27 November.  Swami Suhitanandaji presided over the inaugural function of the programme.  The reunion saw enthusiastic participation of 500 alumni along with their families.

Chengam centre held a day-long programme on 28 November to mark the taking over of Sri Ramakrishna Trust, Chengam, and starting of a branch of the Math there.  Also, the temple of Sri Ramakrishna was rededicated with special worship on that day.  Swami Gautamanandaji presided over the public meeting which was attended by 60 monks and 3000 devotees.  The news of starting of the centre was announced in the last month’s Bulletin. 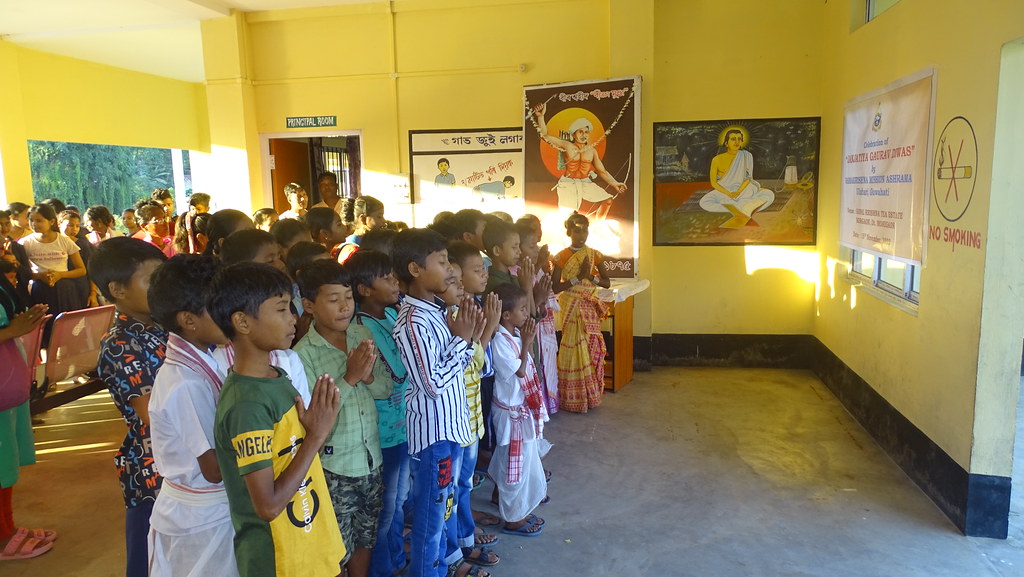 A USG machine was installed at the dispensary of Kankurgachhi centre on 20 November.

The following centres conducted programmes mentioned against their names:

Jalpaiguri: Two commemorative programmes, one on the centre’s premises on 5 November and the other in Siliguri on 7 November, which were attended by 141 and 300 people respectively.

Rahara: An interfaith meet on 8 November in which the General Secretary and others spoke. About 700 people attended the programme.

The newly built Sri Ramakrishna Temple at Baliati centre, Bangladesh, was consecrated on 5 November, the birthday of Swami Subodhanandaji Maharaj.  Special worship, homa, a colourful procession and public meetings were held from 4 to 6 November.  Mr. Zahid Maleque, Minister for Health and Family Welfare, Government of Bangladesh, and many other dignitaries, monks and devotees took part in the consecration ceremony.

Asansol: (i) An eye camp at Gadapathar village in Asansol district on 13 November: 81 patients were treated and 7 were selected for cataract surgery, (ii) A medical camp in Alladi, Paschim Medinipur, on 20 November in which 14 doctors treated 413 patients.

Bankura: A total of 838 eye patients were screened, 155 were operated on and 80 were given spectacles in September.

Coimbatore Mission: Eight medical camps (2 dental, 1 orthopaedic, 1 cardiology, 1 ENT, 1 cancer, and 2 general camps) in rural and tribal areas of Coimbatore district from 29 October to 20 November in which a total of 365 patients were treated.

Cooch Behar: A cleft lip and palate camp on 30 October in which 40 patients were examined.

Delhi: Eye operations on 20 patients and distribution of spectacles to 3 patients in October.

Guwahati: A medical camp in Barjhar village of Darang district on 13 November in which 426 patients were treated.

Jalpaiguri: An eye camp on 13 November in which 167 patients were checked and 81 were given spectacles.

Jamshedpur: An eye camp on 4 November in which 47 patients were checked and 26 were operated on for cataract.

Jhargram: A medical camp on 13 November in which 76 patients were treated and 156 diagnostic tests were done.

Kamarpukur: 476 eye patients were checked, 182 were operated on and 77 were given spectacles in November.

Khetri: A total of 299 eye patients were screened and 122 were operated on from July to November.

Lucknow: 4698 eye patients were checked and 429 were operated on and given spectacles in October.

Madurai: (i) A blood donation camp on 6 November in which 54 people donated blood.  (ii) An eye camp on 20 November – 217 patients were screened, 57 underwent cataract surgery and 26 were given spectacles.

Manasadwip:  Two eye camps on 16 October and 20 November – a total of 365 patients were treated; subsequently 96 were operated on.

Nabadwip: An ayurvedic camp on 20 November in which 261 patients were treated.

Porbandar: An eye camp on 11 November: 55 patients were treated and subsequently 18 were operated on for cataract.

Ranchi Morabadi: (i) Eye camps in October and November in which 1127 patients were checked, 25 were operated on for cataract, and 65 were given spectacles. (ii) A programme on ‘Health and nutrition of rural women and children’ on 28 October which was attended by 200 people.

Salem: (i) An eye camp on 13 November: 102 patients were checked, and subsequently 47 were operated on and 5 were given spectacles, (ii) Two medical camps on 6 and 20 November attended by 1402 patients in all.

Thanjavur: A medical camp on 12 November in which 35 people were treated.

Durban, South Africa: A medical camp at Ladysmith on 30 October in which 585 patients were treated.

Swami Ajitananda (Raghunath) passed away at Varanasi Advaita Ashrama in the night between 3 and 4 November.  He was 56 and had reportedly been suffering from depression for some years.  An initiated disciple of Swami Gambhiranandaji Maharaj, he joined the order at Garbeta centre in 1995 and received sannyasa diksha from Swami Ranganathanandaji Maharaj in 2004.  He served the order at Belur Math (first as a bhandari and then a pujari at Sri Ramakrishna Temple) and Garbeta, Mumbai, Manasadwip and Varanasi Advaita Ashrama centres.  The swami was austere and gentle by nature. Swami Tripurananda (Jagannath/Jonathan) breathed his last on 16 November at 4.30 pm GMT (10 pm IST) at Wexham Park Hospital, Slough, UK, due to heart failure.  He was 81 and had been suffering from ulcerative colitis for several years.  Initiated by Swami Ghananandaji Maharaj, he joined our Ramakrishna Vedanta Centre, UK, in 1963 and received sannyasa diksha from Swami Vireshwaranandaji Maharaj in 1977.   All through his monastic life, he served at the UK centre, first at the Muswell Hill and Holland Park locations in London, and later at Bourne End, the centre’s present location.  He assisted in editing the centre’s bimonthly journal Vedanta for 25 years.  He had been living a retired life since 2001.  Ever cheerful despite his prolonged illness, the swami was orderly, soft-spoken and particular about neatness. Swami Shaileshwarananda (Satish) expired on 25 November at 6.25 pm at Varanasi Home of Service.  He was 48 and had been suffering from diabetes, hypertension and kidney disease for quite a few years.  Initiated by Swami Ranganathanandaji Maharaj, he joined the order in 2002 at Mysuru centre and received sannyasa diksha from Swami Atmasthanandaji Maharaj in 2015.  He served the order at Mysuru, Ponnampet, Almora, Salem, Mayavati, Thiruvalla and Limbdi centres.  Following a severe decline in his health in 2018, he moved to Varanasi Home of Service for treatment.  He was jovial and austere.

Relief Services : A Brief Report as on 1 December 2022