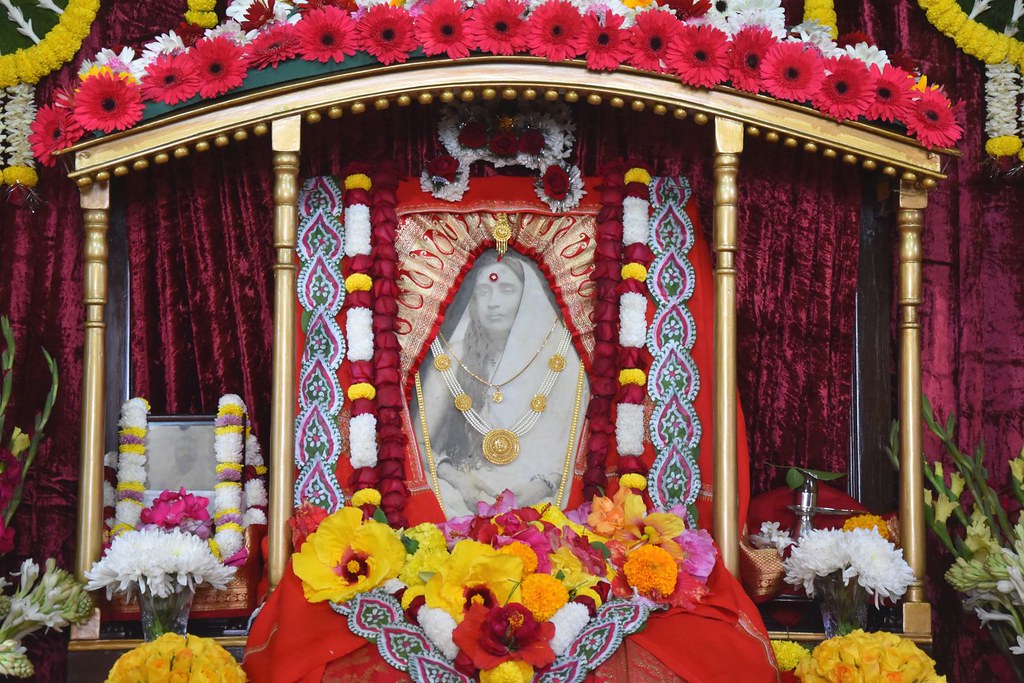 Revered President Maharaj will remain in Belur Math throughout January.

Swami Vagishananda ji will visit Bhubaneswar from 23 to 28 January.

Swami Gautamananda ji is scheduled to visit Thiruvananthapuram, Tirupati and Kadapa from 3 to 9 January, Oman from 21 to 25 January, Raipur on 28 and 29 January, and Salem and Tiruchirapalli from 31 January to 5 February.

Swami Shivamayananda ji will be visiting Malda from 25 to 28 January.

Swami Suhitanandaj i is scheduled to visit Antpur from 2 to 9 January, and Chandipur from 23 to 25 January.

The 110th Annual General Meeting of the Ramakrishna Mission was held at Belur Math on Sunday, 15 December. Revered President Maharaj chaired the meeting. In all, 139 monastic Members, 62 lay Members and 81 Associates attended the meeting. Photos

The birthday of the Holy Mother was celebrated at Belur Math on Wednesday, 18 December. Thousands of devotees attended the celebration throughout the day. Cooked prasad was served to about 32,000 devotees. Swami Balabhadrananda chaired the public meeting held in the afternoon. Photos  |  Videos

As a sequel to the year-long celebrations of the 125th anniversary of Swami Vivekananda’s Chicago addresses, an All India Alumni Meet of Ramakrishna Math and Ramakrishna Mission educational institutions was held at Belur Math on 28 and 29 December. Revered President Maharaj inaugurated the event and the General Secretary welcomed the delegates. All our Vice-Presidents also addressed the different sessions of the two-day Meet. Sri Bibek Debroy, Chairman, Economic Advisory Council to the Prime Minister of India, and a number of distinguished alumni from various walks of life shared their views. In all, 2000 lay alumni, 150 monastic alumni, 300 other monastic brothers and 700 guests took part in the Meet. Photos and report

Vivekananda Vedanta Society of British Columbia, Vancouver, Canada, has been affiliated to the Ramakrishna Math. Its postal address is

It may be recalled that it was in Vancouver that Swamiji first set foot on North American soil in 1893 on his way to Chicago, USA.

The Postal Index Number (PIN) of Aurangabad centre has been changed to 431010.

Baranagar Mission Ashrama has launched a website with the address rkmbaranagore.org.

Dr Harisingh Gour Vishwavidyalaya, a central university in Madhya Pradesh, felicitated Mayavati Ashrama on 8 December for its exemplary role in spreading the message of Advaita Vedanta through its publications.

An allopathic dispensary was inaugurated at Barisha Math on 18 December, the sacred birthday of the Holy Mother.

Sri Prahlad Singh Patel, Minster of State for Culture and Tourism, Government of India, inaugurated a 4D virtual reality film on Swamiji at Vivekananda House of Chennai Math on 20 December. The film brings alive Swamiji’s wanderings in India and his meditation on a rock in Kanyakumari. Photos and Report

The higher secondary school of Kozhikode centre secured, for its environmental awareness and educational activities, the second position at the national level in the Ecoclub programme of the Ministry of Environment, Forest and Climate Change, Government of India.  A certificate and a cash award of 25,000 rupees were presented to the school in a programme held in Vadodara on 21 December.

One hundred students of our Imphal school secured the top ten positions in the state-level Mathematics & Science Competition conducted by Don Bosco Alumni, Imphal, on 10 November. One of these students, who secured the highest marks in the competition, received the best student award. The winners were presented with mementos, certificates and cash prizes on 22 December.

A special worship and public meeting were held at Kasundia centre, Howrah, on 22 December, the janma-tithi of Swami Shivananda ji Maharaj, to mark the taking over of Ramakrishna Vivekananda Ashram and starting of a branch of the Ramakrishna Mission there. The General Secretary presided over the meeting which was attended by nearly 300 monks and 2000 devotees. The news of the starting of the centre and the centre’s contact details have already been announced in the September 2019 Bulletin.

Aalo centre conducted two medical camps in remote villages, namely Doji Jelly and Ngomdir, on 2 December in which 66 patients were treated in all.

Asansol Ashrama held a medical camp in Chittaranjan on 15 December in which 497 patients were treated by 12 doctors. Photos and Report

The General Secretary inaugurated Nivedita Hall above the library building at Bhubaneswar centre on 1 November.

Delhi centre has taken up construction of an eight-storey building in Gurugram (Gurgaon) for its proposed sub-centre there. Swami Gautamanandaji laid the foundation stone for the building on 11 November, the sacred birthday of Swami Vijnananandaji Maharaj.

Dibrugarh Ashrama conducted a medical camp on 24 November in which 75 thyroid and liver function tests were performed.

Narottam Nagar centre held a medical camp on 8 December in which 299 patients were treated by 13 specialists.

Vadodara centre conducted an orthopaedic camp on 22 December in which 43 patients were examined.

Barasat Math held a youths’ convention on 21 December which was attended by 660 delegates and 150 guests and devotees.

Coimbatore Mission centre held a three-day residential youths’ convention from 29 November to 1 December in which 411 delegates participated. Photos and Reports

Delhi centre conducted 4 values education workshops in Delhi and Noida from 29 November to 7 December in which 183 teachers in all took part.

Rajkot Ashrama held 16 values education programmes from 25 November to 24 December in which a total of 1326 students from 8 schools participated.

Vadodara centre conducted two values education programmes on its campus and another seven programmes at different schools in Anand, Bharuch and Vadodara districts in December. In all, 3358 students participated in these programmes.

Commemoration of the 125th Anniversary of Swami Vivekananda's Chicago Addresses

Coimbatore Mission centre conducted cultural competitions at 7 schools and ITIs in and around Coimbatore from 31 October to 3 December. In all, 688 students took part in the competitions. At all the venues, the competitions were followed by a talk, an awards ceremony and a skit. Photos and Report

Lucknow centre held a parliament of religions, a seminar and a youths’ conference on 28 and 29 December. The two-day programme was inaugurated by Sri Dinesh Sharma, Deputy Chief Minister of Uttar Pradesh.

Pune Math staged two shows of a Hindi play on Swami Vivekananda in Delhi on 8 and 9 December. The show on 9 December was held in the Parliament House and Sri Ram Nath Kovind, President of India, was the chief guest at the programme. In all, about 1000 people attended the shows. Another show of the same play was staged in Nagpur on 13 December. This was inaugurated by Sri Nitin Jairam Gadkari, Minister for Road Transport & Highways and Shipping, Government of India, and was attended by 8000 people. Photos and Report

Vijayawada centre held two students’ conventions and a teachers’ convention from 6 to 8 December. In all, 1050 students and teachers from a number of educational institutions participated in the conventions. Photos and Report

Durban centre, South Africa, conducted four special lectures by Swami Gautamanandaji at Durban centre and its three sub-centres in New Castle, Ladysmith and Pietermaritzburg from 27 November to 1 December, and a public meeting and cultural programmes in Cape Town on 3 December. In all, 413 people attended the programmes.

Swami Pratyagananda ji (Mahesh Maharaj) passed away at Varanasi Home of Service on 3 December at 10.45 am due to sudden cardiac arrest. He was 83 and had been suffering from bronchial asthma and cardiac problems for several years. Initiated by Swami Yatishwaranandaji Maharaj, he joined the order in 1964 at Bengaluru Math and received sannyasa diksha from Swami Vireshwaranandaji Maharaj in 1974. He served the order at our centres in Bengaluru, Khetri, Prayagraj, Varanasi Home of Service, Katihar, Ranchi Sanatorium, Jaipur, Ramharipur, Puri Mission and Chennai Students’ Home. He had been living a retired life at Varanasi Home of Service since 2003. He was amiable by nature.

Swami Paripurnananda ji (Krishnananda Maharaj) expired at Seva Pratishthan, Kolkata, on 9 December at 5.30 am. He was 80 and had been suffering from various old-age ailments for some years. An initiated disciple of Swami Madhavanandaji Maharaj, he joined the order in 1965 at Advaita Ashrama, Kolkata, and received sannyasa diksha from Swami Vireshwaranandaji Maharaj in 1974. He served at Advaita Ashrama (Kolkata) and Saradapitha (Belur) centres. He had been living a retired life at Belur Math for the last five years. He was simple and affectionate by nature.

Swami Vishnurupananda ji (Divyendu Maharaj) breathed his last at Seva Pratishthan, Kolkata, on 31 December at 9 am. He was 75 and had been suffering from diabetes, hypertension and kidney disease for the last few years. Initiated by Swami Nirvananandaji Maharaj, he joined the order in 1968 at Deoghar Vidyapith and received sannyasa diksha from Swami Vireshwaranandaji Maharaj in 1978. He served at Deoghar, Visakhapatnam and Seva Pratishthan centres. Owing to his health problems, he retired from active life a few years ago, and continued to stay at Seva Pratishthan. He was simple and self-effacing by nature.