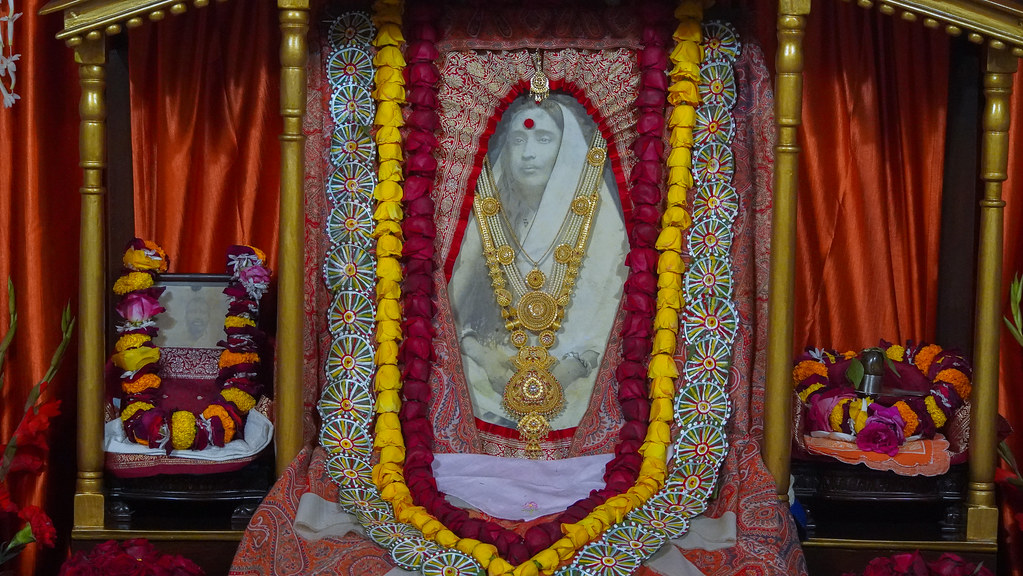 Revered President Maharaj is at Belur Math.  He is keeping well.

Swami Gautamananda ji, now at Chennai Math, will be visiting Belur Math from 10 to 16 January, Belgharia (Kolkata) from 17 to 21 January, Sikra-Kulingram from 22 to 24 January, and Hyderabad from 30 January to 5 February.  He is keeping well.

Swami Suhitananda ji, now on a visit to Visakhapatnam and Bengaluru, is scheduled to return to Belur Math on 10 January.  Later, he will stay at Barasat Math from 20 to 27 January.  He is keeping well.

Swami Girishananda ji is at Belur Math.  He will be visiting Guwahati from 5 to 11 January, Antpur from 18 to 22 January, Deoghar from 25 to 29 January, and Balaram Mandir, Kolkata, from 29 January to 8 February.  He is keeping well. 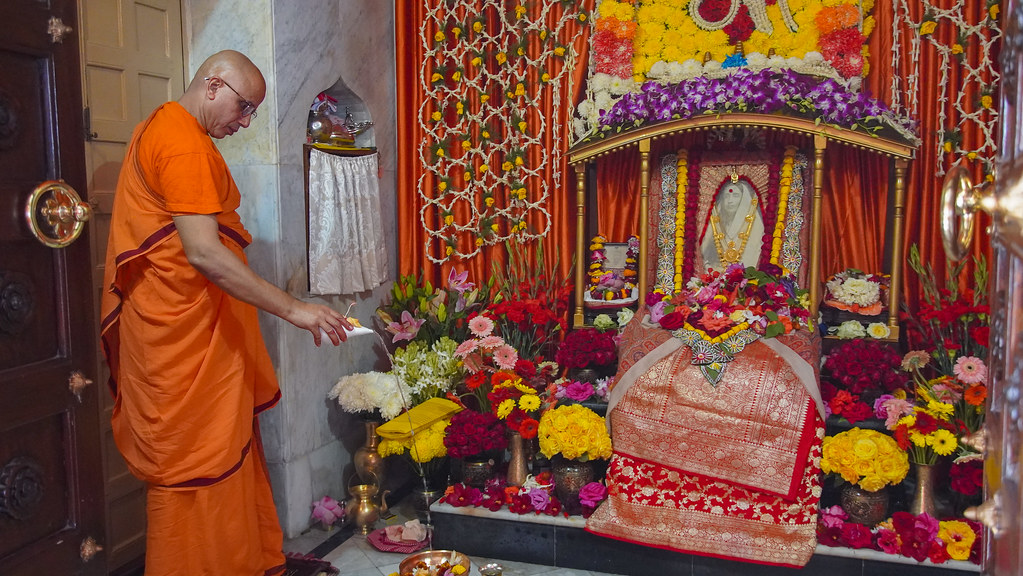 Revered President Maharaj laid the foundation stone for Ma Sarada Bhavan opposite Belur Math dispensary on 14 December.  The proposed six-storey building will have a waiting hall, rooms for devotees and visitors, and a few other public amenities. 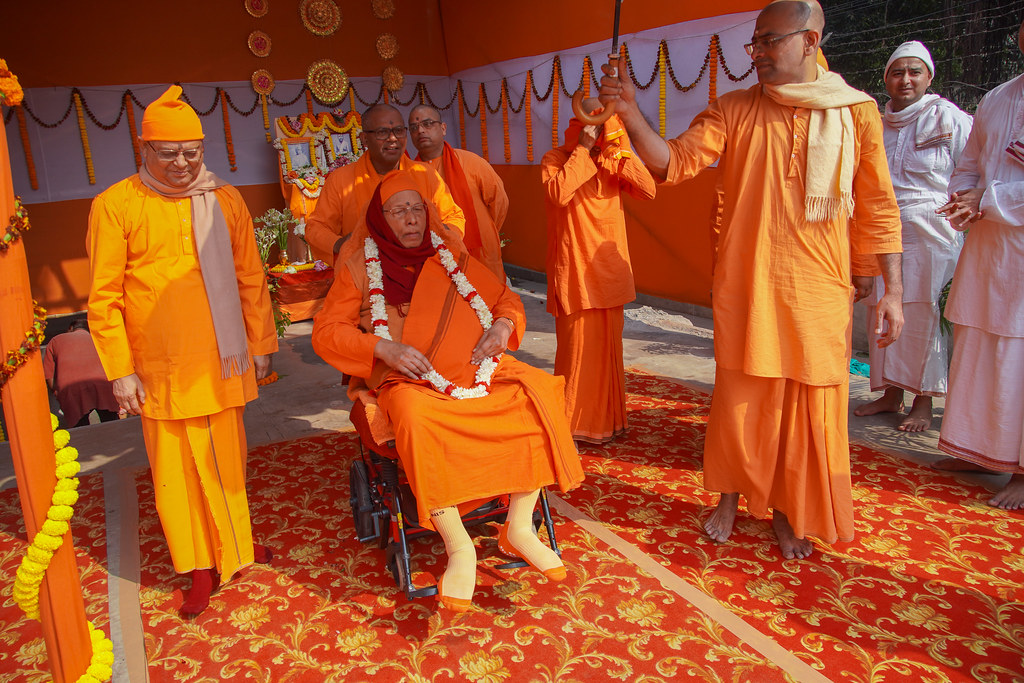 The birthday (janma-tithi) of Holy Mother Sri Sarada Devi was celebrated at Belur Math on Wednesday, 15 December.  Thousands of devotees attended the celebration throughout the day.  Khichuri prasad was served to about 32,000 devotees.  Swami Balabhadrananda chaired the public meeting held in the afternoon. 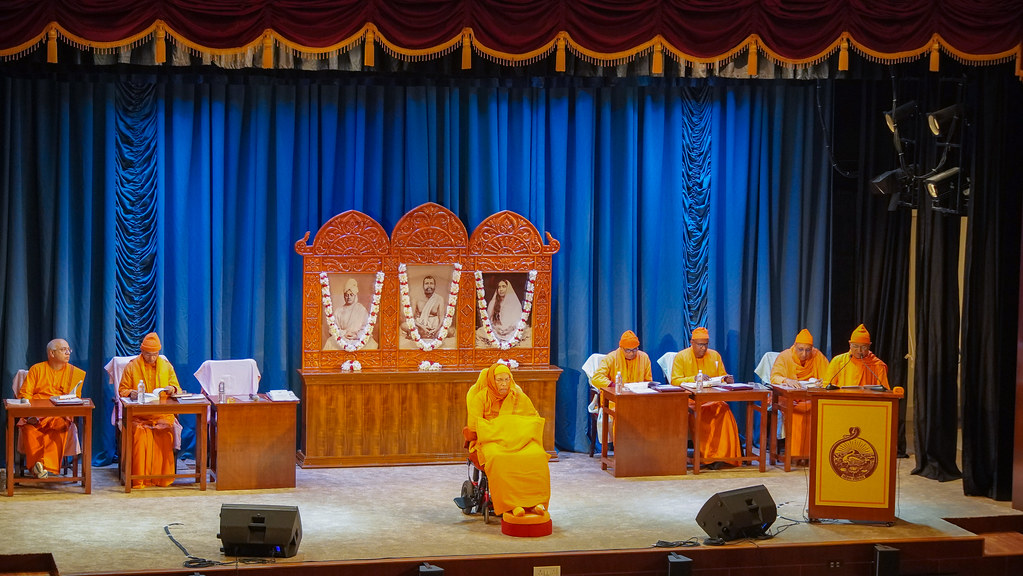 The 113th Annual General Meeting of the Ramakrishna Mission was held at Belur Math on Sunday, 18 December.  Revered President Maharaj chaired the meeting.  In all, 150 monastic members, 51 lay members and 77 associates of the Mission attended the meeting.

Following a thorough renovation of Swami Vivekananda Temple at Belur Math, special puja, homa and abhisheka were held in the temple on 25 December.

Jhargram centre has changed its website address from <www.rkmvmjhargram.org> to jhargram.rkmm.org

The following centres conducted programmes mentioned against their names:

Dhaleswar, Agartala: A youths’ convention and a devotees’ convention on 13 and 14 November which were attended by 700 people in all.

Hatamuniguda: A commemorative programme on 27 November attended by 750 people.

Viveknagar, Agartala: A three-day youths’ camp from 28 to 30 December in which 631 people, including 305 resident delegates, took part.

St Louis: A commemorative programme with lectures and songs at a temple in St Louis on 19 November attended by 200 people, and publication of a souvenir.

A new guesthouse, named Nivedita Cottage, was inaugurated at Darjeeling centre on 28 November.

The Sarada College of Nursing and the Gastroenterology Ambulatory Centre were inaugurated at Thiruvananthapuram hospital on 30 November.

The Braille press attached to the Blind Boys’ Academy of Narendrapur Ashrama bagged the State Award for Empowerment of Persons with Disabilities.  Dr Shashi Panja, Minister of Women & Child Development and Social Welfare, Government of West Bengal, presented the award on 2 December.

The Cardio-Thoracic & Vascular Surgery unit at Vrindaban hospital was inaugurated on 7 December.

In an award ceremony held at Gol Park centre on 10 December, the General Secretary conferred Vivekananda Award on Sri Srinivas Venkatram, Mumbai, for his pioneering work in spreading the message of Swamiji among different sections of people, Vivekananda Medal posthumously on S K Roy of Peerless Group, Kolkata, for his philanthropic work, and Sister Nivedita Award on Sri H N Muralidhara, Bengaluru, for his contributions to Ramakrishna-Vivekananda literature in Kannada.  The awards carried citations and cash prizes. 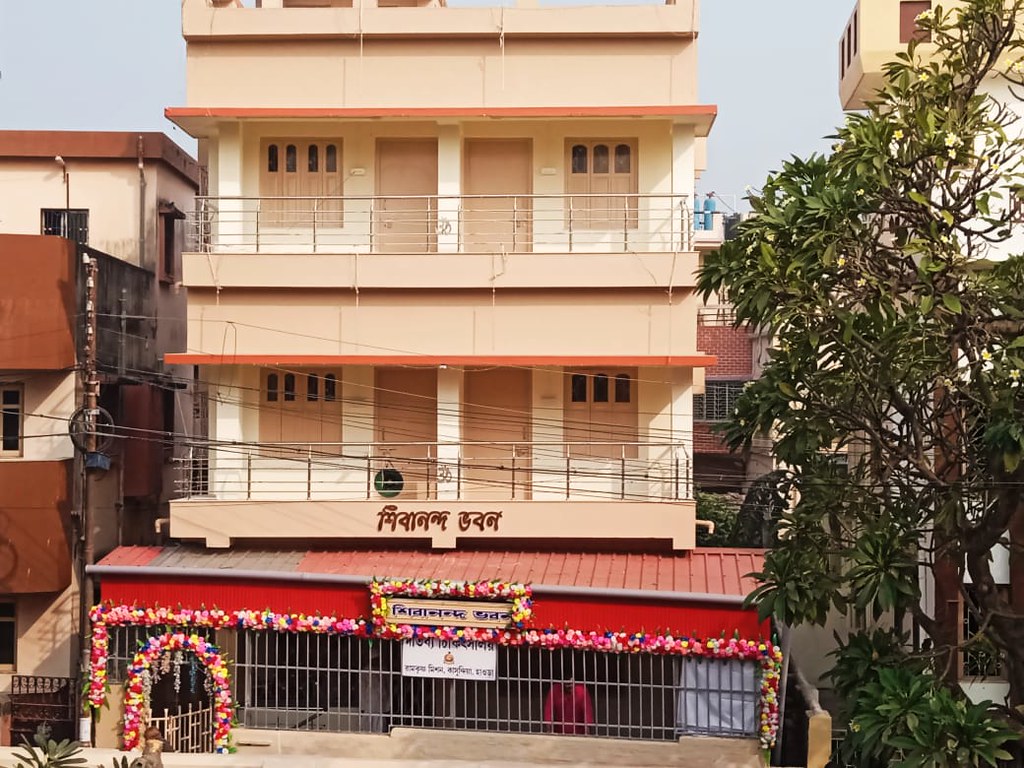 The General Secretary inaugurated Shivananda Bhavan at Kasundia centre, Howrah, on 19 December, the sacred birthday of Swami Shivanandaji Maharaj.  The building will be used to run a dispensary and to accommodate guests.

A visually impaired class-7 student of Coimbatore Vidyalaya won the first place in the swimming championship conducted by Tamil Nadu Paralympic Sports Association on 29 and 30 October. 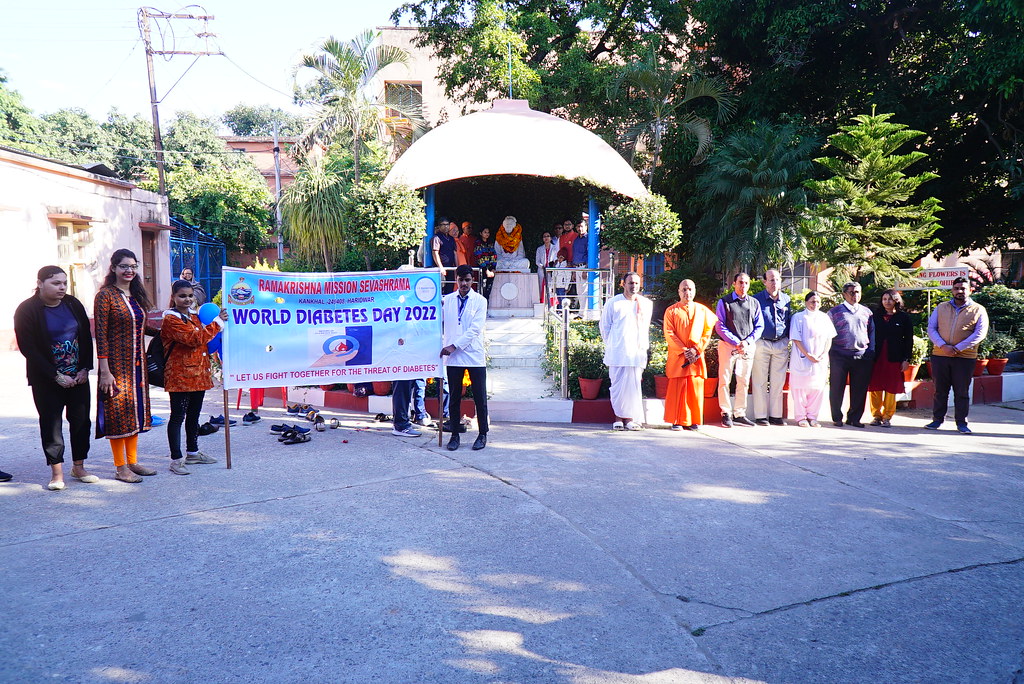 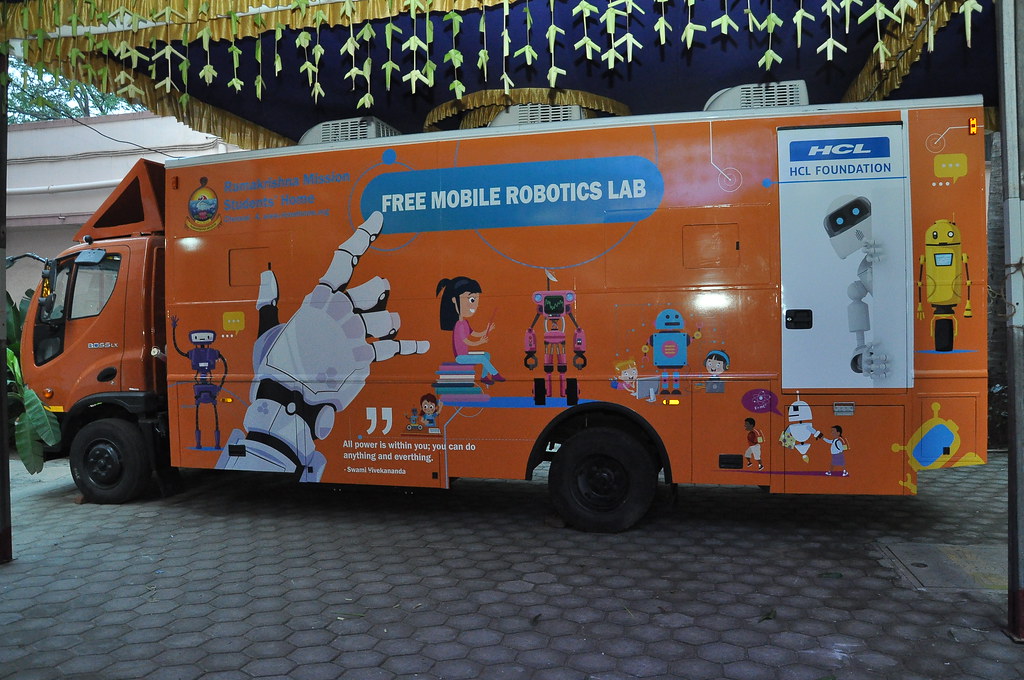 Chennai Students’ Home launched on 20 December a mobile laboratory to give children in government schools exposure to robotics.

Belagavi centre held (i) a three-day residential workshop for teachers from 17 to 20 November in which 37 teachers from government schools took part, and (ii) values education programmes at seven locations in Belagavi city from 5 to 29 November which were attended by 877 students. 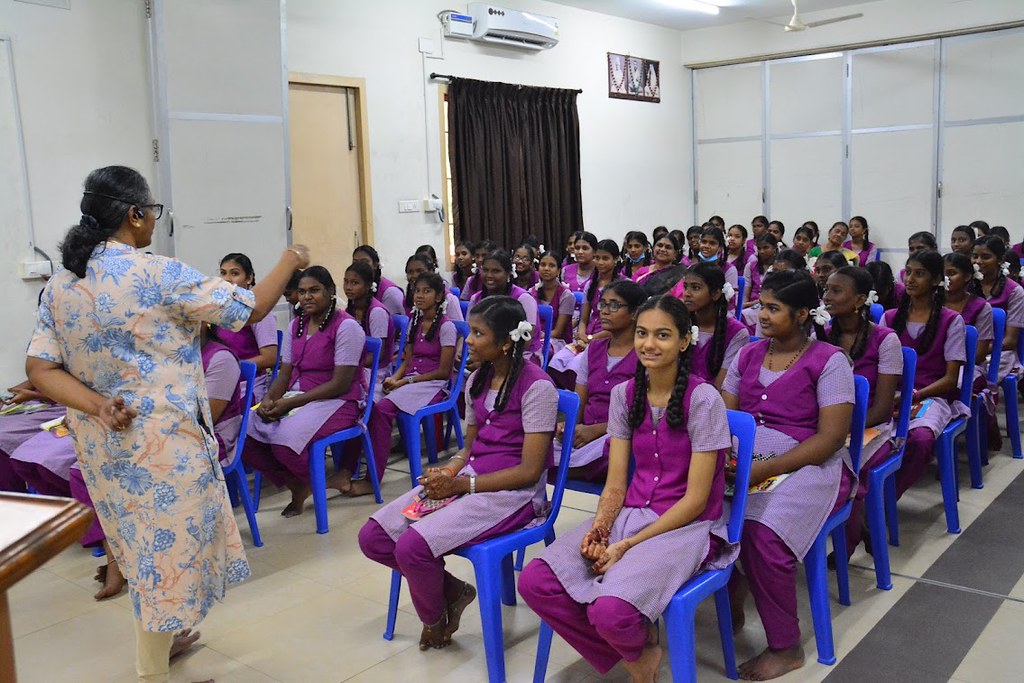 Chennai Math conducted values education programmes in which 985 students from 5 institutions in and around Chennai, along with 52 faculty members, took part from 3 November to 9 December.

Coimbatore Mission held two youths’ conventions on 26 November and 3 December in which a total of 194 school and college students from 2 institutions took part. 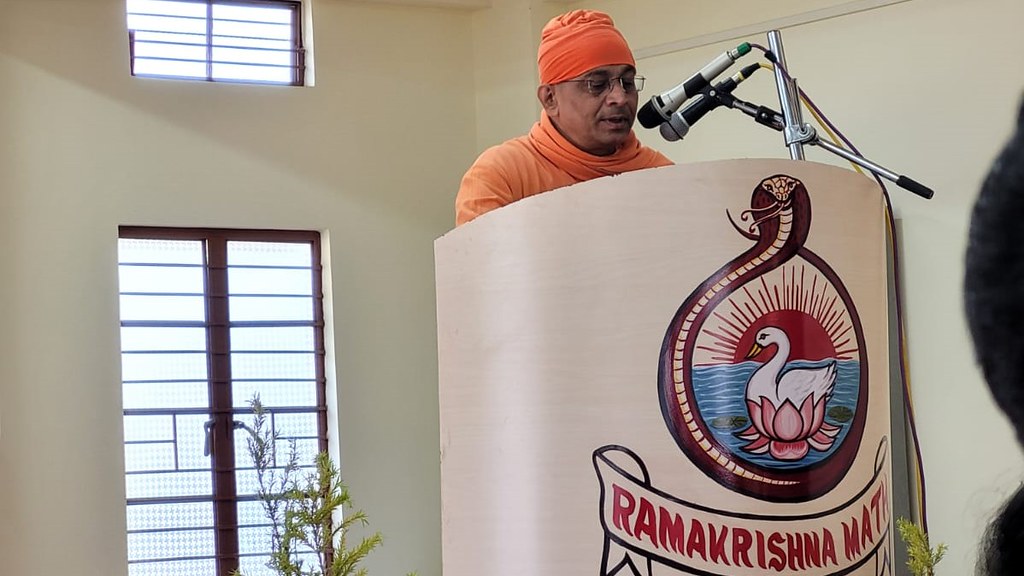 Cooch Behar centre held a youths’ convention on 7 December which was attended by 136 students and 11 teachers. 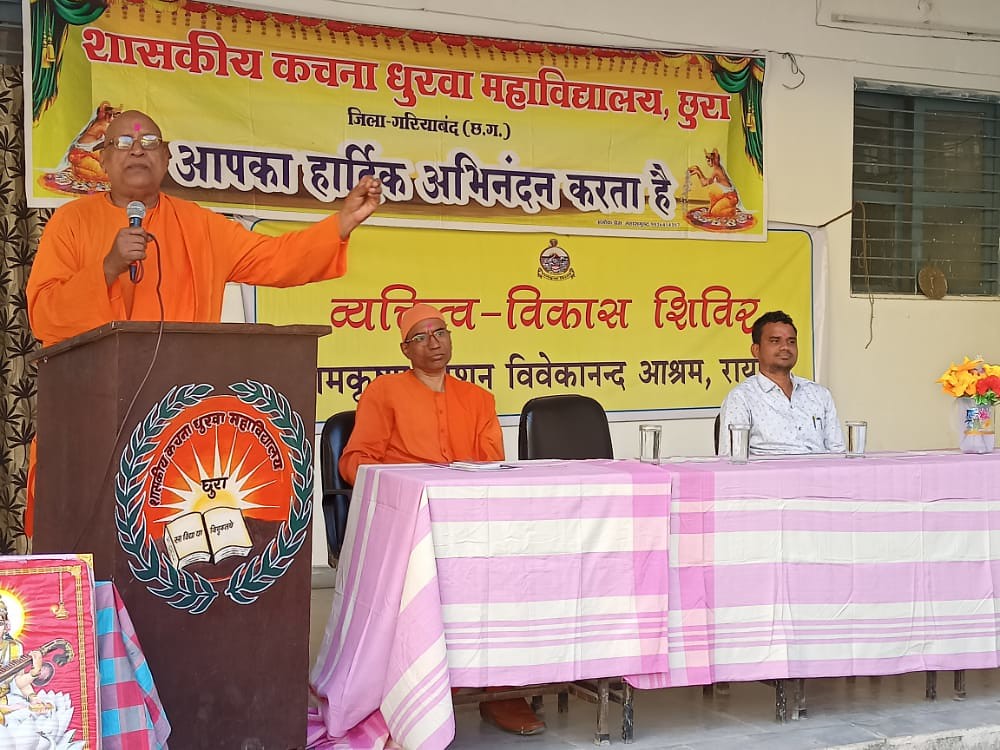 Raipur centre held a personality development camp at a college in Gariyaband district, Chhattisgarh, on 12 December which was attended by 380 students and 24 college staff members. 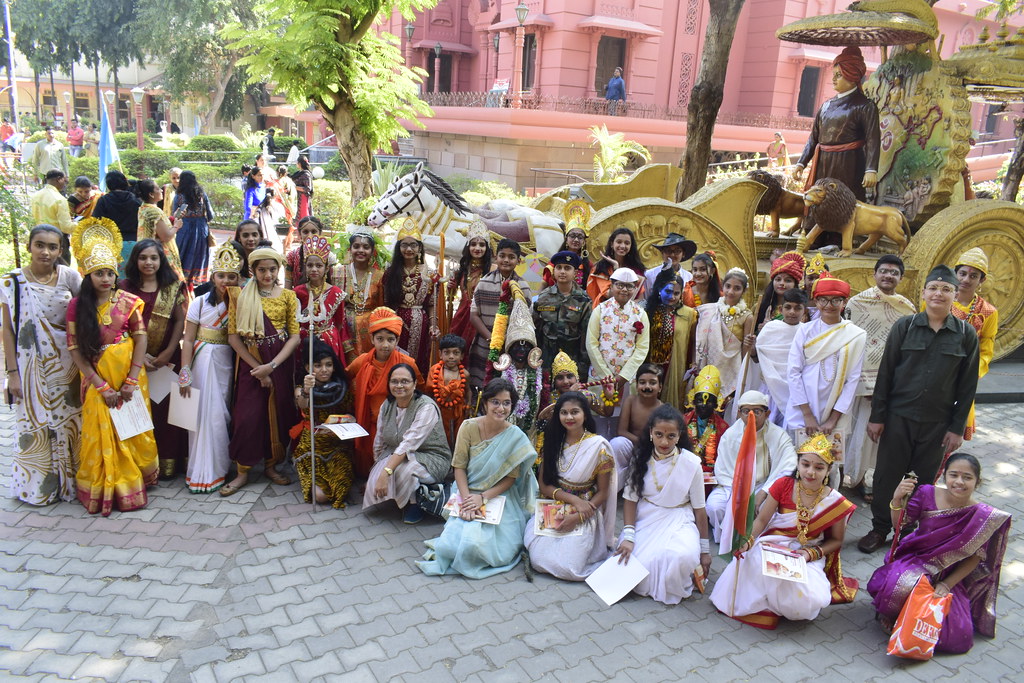 Rajkot: Cultural competitions from 7 to 25 December in which 8124 students from 177 schools took part.

Vadodara centre conducted nine values education programmes in different educational institutions from 22 September to 23 December in which a total of 2215 students participated.

Asansol: A medical camp in Mohanpur, Bankura district, on 10 December in which 371 patients were treated.

Belagavi: 248 eye patients were screened and 89 were operated on in November.

Coimbatore Mission: Eight medical camps (2 cancer, 1 orthopaedic, 1 cardiology, 1 dental and 3 general camps) in rural and tribal areas of Coimbatore district from 27 November to 18 December in which a total of 408 patients were treated.

Darjeeling: Four medical camps from 4 September to 25 December in which altogether 157 patients were treated.

Gourhati: Three eye camps from 31 October to 21 December – 237 patients were treated and 13 were given spectacles and 23 were operated on in an eye hospital.

Gurap: Eye camps in September, November and December in which altogether 128 patients were checked; 21 of them were operated on at an eye hospital.

Jammu: A medical camp on 10 December in which 238 patients were treated.

Jamshedpur: Three eye camps from 18 November to 18 December in which 246 patients in all were checked; 113 of them were operated on for cataract at an eye hospital.

Kamarpukur: 468 eye patients were checked, 46 were operated on and 136 were given spectacles in December.

Khetri: 126 eye patients were screened and 60 were operated on for cataract in November and December.

Lucknow: (i) 9329 eye patients were checked and 501 were operated on and given spectacles in November, (ii) Ayurveda medical camp from 3 to 5 November in which 1001 patients were treated.

Madurai: (i) A health awareness programme on 4 December attended by 172 people.  (ii) An eye camp on 18 December – 201 patients were screened, 57 underwent cataract surgery and 38 were given spectacles.

Manasadwip: (i) Conducted an eye camp on 18 December in which 107 patients were treated, and (ii) Arranged cataract surgery for 19 patients on 22 December in association with another institution.

Nabadwip: A medical camp on 11 December in which 201 patients were treated.

Nagpur: An eye camp in Kanhan village, Nagpur district, on 11 December in which 196 patients were treated, 46 were operated on for cataract, and 106 spectacles were distributed.

Naora: An eye camp on 24 December in which 33 patients were operated on.

Ranchi Morabadi: Eye camps in December in which a total of 135 patients were checked and 37 were operated on for cataract.

Salem: A medical camp on 11 December in which 626 patients were treated.

Thanjavur: Two medical camps (1 dental and 1 general camp) on 25 December in which a total of 85 patients were treated.

Vadodara: Several eye camps from 24 September to 23 December in which a total of 2739 patients were treated; 359 of them were operated on for cataract at a hospital.

Viveknagar, Agartala: An eye camp on 13 December in which 70 patients were checked; 13 of them were subsequently operated on.

Durban: An eye camp on 11 December in which 76 patients were examined and given spectacles. Swami Anaghananda (Nikhil) passed away at Vrindaban centre on 4 December at 7.04 pm.  He was 75 and had been suffering from diabetes, hypertension and Parkinson’s disease.  He had returned to Vrindaban a few weeks ago after remaining at Belur Math for more than two years, and the end came rather suddenly and almost painlessly.  Initiated by Swami Vireshwaranandaji Maharaj, he joined the order in 1975 at Sargachhi centre and received sannyasa diksha from his guru in 1985.  He served the order at Belur Math (at the Estate and Bhava Prachar offices of the Headquarters and at the Math Office) and at Sargachhi, Manasadwip, Rahara, Kanpur, Mumbai (for a short period), Kalady and Sarisha centres.  He also participated in several relief and rehabilitation projects, including the ones at Bhubaneswar and Uttarkashi in 1991 and at Jalpaiguri in 1994.  Since October 2013, he had been living a retired life, staying mostly at Vrindaban centre.  The swami was affectionate and sociable by nature. Swami Purnakamananda ji (Suresh Maharaj) breathed his last at SCS Hospital, Mangaluru, on 15 December, the auspicious birthday of the Holy Mother, at about 6.15 am.  He was 81 and had been suffering from diabetes, hypertension and cardiac arrhythmia for some years.  Initiated by Swami Vireshwaranandaji Maharaj, he joined the order in 1968 at Mumbai centre and received sannyasa diksha from his guru in 1978.  He served the order at Mumbai, Mauritius and Narottam Nagar centres as an assistant and at Mangaluru centre, first as an assistant and then as the head.  After relinquishing the headship of Mangaluru centre in 2010, he was living a retired life there itself.  Soft-spoken and gentle by nature, he endeared himself to all who came in contact with him. Swami Varadananda ji (Charles/Ganesh Maharaj) passed away on 30 December at 4.16 pm CST (31 December, 3.46 am IST) at Lakewood Nursing and Rehab Center in Plainfield, Illinois, USA.  He was 77.  A few days ago, he suffered a mild stroke and was admitted to a hospital.  Initiated by Swami Vireshwaranandaji Maharaj, he joined the order in 1973 at Chicago centre and received sannyasa diksha from his guru in 1982.  He spent his entire monastic life at Chicago centre where he served in various capacities with all dedication.  He played a key role in organizing the Parliament of the World’s Religions in the USA in 1993.  Till his last, he was a member of the Council of Religious Leaders of Metropolitan Chicago.  His love for the inter-religious faith movement made him known to numerous leaders of different faiths.  Unassuming by nature and meticulous in his work, he won the admiration of devotees for his sweet and friendly behaviour.