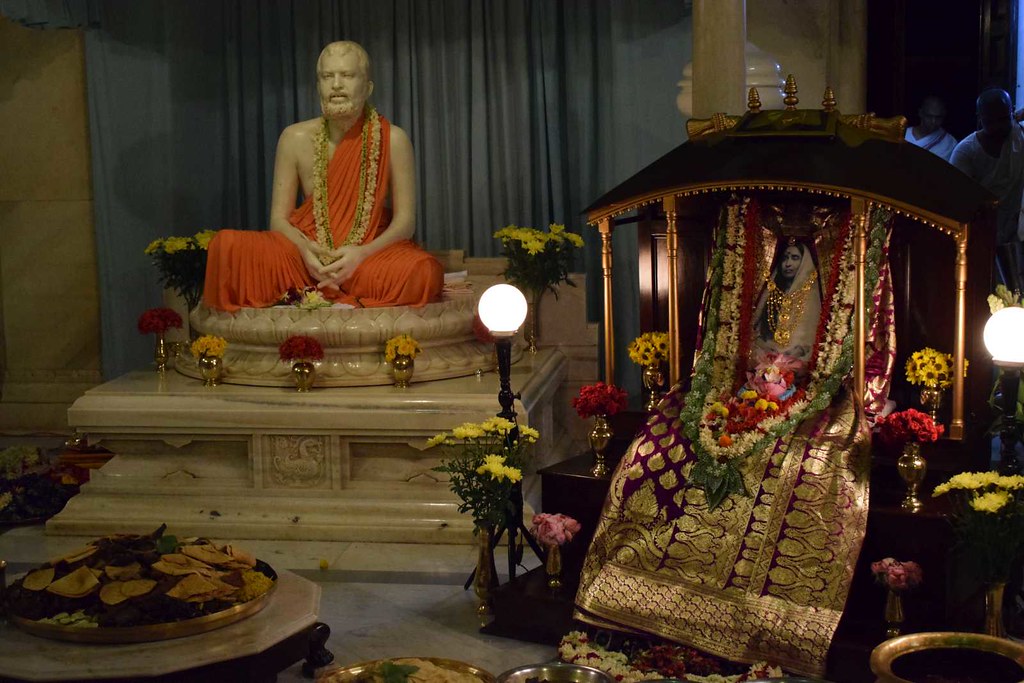 Srimat Swami Atmasthanandaji Maharaj, President, Ramakrishna Math and Ramakrishna Mission, continues to be at Seva Pratishthan. There is no significant change in his health condition.

Srimat Swami Smarananandaji, Vice President, will be visiting Gol Park centre from 6 to 17 June. He is in good health.

Srimat Swami Gautamanandaji, Vice President, is scheduled to visit Mysuru, Ponnampet, Mangaluru, Bengaluru and Belgaum from 5 to 25 June and Karlapalem in Guntur district, Andhra Pradesh, on 28 and 29 June. He is keeping good health at Chennai Math.

Srimat Swami Prabhanandaji, Vice President, will be visiting Baghbazar centre from 11 to 18 June.  He is keeping well.

Srimat Swami  Suhitanandaji, Vice President, is  scheduled  to  return  to  Belur  Math  on  3  June  after  his  visit  to Sikra-Kulingram, Barasat and Bamunmura centres.  He will be visiting Asansol, Burdwan and Gurap from 9 to 17 June and Dubai, England and Ireland from 26 June to 8 July. He is keeping well.

The 121st Foundation Day of the Ramakrishna Mission was celebrated at Belur Math on 1 May by holding a public meeting. Swami Smarananandaji chaired the meeting and Swami Suhitanandaji delivered the welcome address. Swami Suvirananda and a few others addressed the gathering. Click here for photos.

Sri Sri Buddha Jayanti was celebrated at Belur Math on 10 May 2017. Click here for photos.

Sri Sri Shodashi puja was performed at Belur Math, on the night of Phalaharini Kali Puja tithi, 25 May 2017. Click here for photos.

A new branch centre of the Ramakrishna Mission has been started in the state of Goa.

The centre was formally inaugurated on 28 May in a programme which was attended by Swami Gautamanandaji; the General Secretary; Sri Shripad Yesso Naik, Union Minister of State, Ministry of AYUSH; other dignitaries, about 25 monks and 200 devotees.

Koyilandy Math conducted a programme comprising speeches and a cultural programme on 28 May which was attended by about 200 people. Brief report and photos.

Antpur centre conducted a devotees’ convention on 5 May in which about 250 devotees took part.

Chennai Math in association with another organization held a day-long programme comprising lectures on 1 May in which about 300 women from different service organizations in Tamil Nadu took part.

Delhi centre conducted an online competition in which 250 college students took part.  The winners were given away prizes on 23 April.

On the initiative of Kankurgachhi Math, a procession and a youths’ convention were held at Patharpratima in South 24 Parganas district on 5 and 6 May.  About 400 students from 10 schools participated in the convention.

Kanpur centre conducted cultural competitions and a lecture at a women’s college in Jajmau, Kanpur, on 29 April.

Naora centre held a programme on women empowerment on 28 April in which about 700 people participated. Brief report and photos.

Ponnampet Ashrama held a public meeting on 20 May which was attended by about 200 people.

Sarisha centre held special lectures on 6 and 9 April.   In all, about 2700 people, comprising mainly students, attended the lectures.

Silchar centre conducted a students’ and teachers’ convention on 24 and 25 May in which 210 students and 58 teachers from 36 schools took part.

Chicago and St. Louis centres (USA) jointly held a seminar on Sister Nivedita at Washington University, St. Louis, on 29 April which was attended by 75 people.

Telephone: Burdwan centre has got a land-line telephone connection with number (0342) 2622929.

The year-long  centenary celebration of Karimganj centre was inaugurated on 10 May, the sacred  Buddha  Purnima  day,  by  Swami  Gautamanandaji. A number of monks and about 500 devotees attended the programme. Report and Photos.

Narainpur centre held a five-day sports meet from 5 to 9 April in which 1500 students from 30 schools of 3 districts in Chhattisgarh participated.

Madurai Math distributed buttermilk to about 2000 people from 9 to 13 May on the occasion of Chaitra Purnima festival.

Koyilandy Math conducted spiritual retreat on 21 May. Report and Photos.

The football team of Narainpur school won the football championship conducted by Central Reserve Police Force.  Dr. Raman Singh, Chief Minister of Chhattisgarh, handed over a cup and a sum of 50,000 rupees to the team on 21 May.

Report and Photos of Summer Camps at Hyderabad | Rajahmundry | Ponnampet

Aalo centre conducted a medical camp at Kato Moku village of West Siang district on 24 May in which 53 patients were treated. Also, educative films were screened to create awareness about health and hygiene. Report and Photos.

Antpur centre held a mother-and-child care camp on 13 May in which 44 women and 120 children were treated by a team of eight doctors.

Katihar centre conducted a medical camp on 21 May in which 292 patients were treated.

Mysuru Ashrama conducted a medical camp at Tenkana Mole (Kuderu village) in Mysuru district on 28 May in which 350 patients from six villages were treated.

Vidyamandira (Arts & Science college under Saradapitha centre) has secured all-India 29th rank amongst the best Science Colleges and 35th rank amongst the best Arts Colleges as per the ranking list announced by India Today for the year 2017. Further, the college has been ranked first in the Kolkata-Howrah metropolitan area under both best Science and Arts colleges categories.

Jalpaiguri centre held a values education workshop at Konpakri in Jalpaiguri district which was attended by 170 students. Report and Photos.

Delhi centre held 9 values education workshops from 1 to 18 May which were attended by 445 principals and teachers. The workshops were held in five states apart from Delhi.

Nagpur Math conducted cultural competitions based on the teachings of Swamiji in January and February in which about 15,000 students from nearly 100 schools took part.

Mysuru Ashrama conducted five cleaning drives between 30 April and 28 May in which a number of volunteers cleaned five localities of the city. Report and Photos.

Kamarpukur centre carried out a cleanliness drive on 21 May.

Mangaluru centre conducted 42 cleaning drives in and around Mangaluru on four Sundays in the month of May in which a large number of volunteers took part.  The centre also held a workshop on  28  May  in  which  225  Panchayat  Development  Officers  and  representatives  of  different Panchayats of Dakshina Kannada district participated. 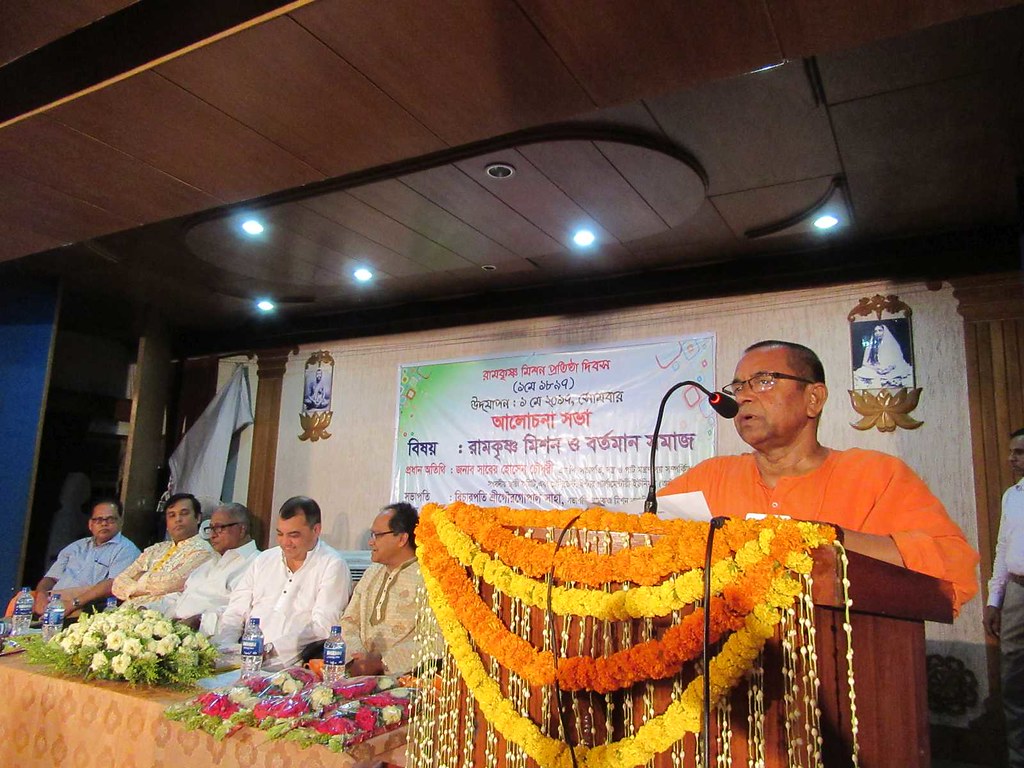 Our Dhaka centre observed the Foundation Day of Ramakrishna Mission on 1 May with a day long program. Report and Photos.

We are sorry to announce the passing away of Swami Shiveshwaranandaji (Bidhu Maharaj) at Seva Pratishthan hospital, Kolkata, on 19 May at 9.30 am.  He was 87 and had been suffering from old-age ailments for some years.  Initiated by Swami Virajanandaji Maharaj, he joined the Order in 1953 at Asansol centre and had Sannyasa from Swami Madhavanandaji Maharaj in 1963. Besides his joining centre, he served at Saradapitha and Narendrapur centres as an assistant and Puri Mission, Singapore and Bhubaneswar centres as the head. After relinquishing headship of Bhubaneswar centre in December 2010, he continued to stay there as a retired monk.  Amiable and affectionate by nature, he contributed to the Order in different capacities.