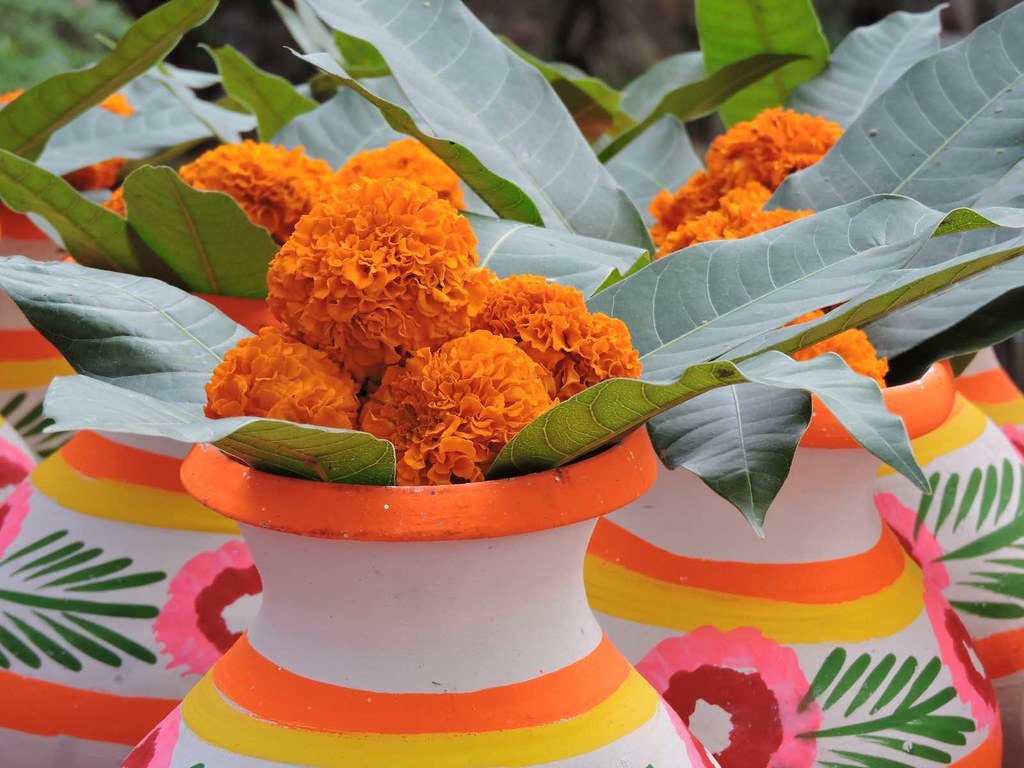 Srimat Swami Atmasthanandaji, President, Ramakrishna Math and Ramakrishna Mission, continues to be at Seva Pratishthan.  There is no significant change in his health condition.

Swami Smarananandaji, Vice President, will be visiting Barasat and Baranagar Mission centres from 9 to 21 May. He is in good health.

Baranagar Math held a public meeting on 23 April which was attended by about 100 people.

On 23 April, Lucknow centre conducted a spiritual retreat which was attended by about 300 devotees, and a special programme for youths in which nearly 120 youths took part.

Vadodara centre held a spiritual retreat on 16 April in which 110 persons participated.

Darjeeling and Jalpaiguri centres jointly arranged a special programme at Siliguri on 31 March. A colourful procession, two public meetings and cultural events were held.  In all, about 2100 people attended the programme. Detailed Report and Photos.

Baranagar Math held a students’ orientation programme on 23 January which was attended by about 100 students.

Coimbatore Math held a special programme on 4 March comprising speeches and a drama on Sister Nivedita. About 450 people attended the programme.

Contai centre conducted a devotees’ convention on 8 April in which 170 devotees took part.

Jalpaiguri centre held a day-long programme comprising a procession, a youths’ convention and a convention for general public on 1 April.  In all, about 3600 people took part in the programmes. Detailed Report and Photo.

Jalpaiguri centre, in association with another institution, also held a football tournament from 10 to 16 April in which 8 teams took part. Detailed Report and Photo.

Limbdi centre held a music concert on 18 April which was attended by about 200 people.

Puri Mission Ashrama held quiz competitions on Sister Nivedita at two places in the districts of Mayurbhanj and Khurda on 22 March and 23 April in which altogether 315 students participated. The Ashrama also conducted a seminar in Khurda district on 25 April which was attended by about 300 people.

Swamiji’s Ancestral House conducted the following programmes: a lecture on 27 March, two music programmes on 29 and 31 March, and a seminar for students on 18 April.  In all, 1350 people attended these programmes.  On the centre’s initiative, two discourses were held in and around Kolkata on 26 March and 10 April which were attended by about 1050 people.

Tirupati centre conducted an essay-writing competition in which 500 students of a women’s degree college in Tirupati took part. The winners were awarded prizes on 25 March.

Vadodara centre screened a film on Sister Nivedita on 6 April and staged a drama on her life on 18 April. Altogether about 300 people watched the shows.

Varanasi Advaita Ashrama conducted a spiritual retreat on 23 April which was attended by 91 people.

The building for the coaching-cum-vocational training centre at Bagda Math was declared open on 13 April.  Detailed Report and Photos.

In the final phase of its yearlong centenary celebration, Chandipur Math conducted a devotees’ convention on 25 December and an interfaith meet on 20 January.  Besides, the centre held a few public meetings and cultural competitions for students and brought out a commemorative volume.  A good number of people attended the programmes.

The new building to house office and bookstall at Barasat Math was inaugurated by the General Secretary on 2 April.

The newly constructed annexe to the school building at Nattarampalli centre was declared open on 2 April.

Vivekananda Sabhangana, a multipurpose hall, at Tirupati centre was inaugurated on 2 April.

Sri N N Vohra, Governor of Jammu and Kashmir, declared open the building for the Educational and Cultural Centre at Jammu centre on 5 April in the presence of the General Secretary and a number of monks and devotees. Detailed Report and Photos.

Bengaluru Math celebrated the 1001st birthday of Sri Ramanujacharya on 9 April. About 1000 devotees attended the programme.

Vrindaban Sevashrama conducted a urology camp from 29 March to 1 April, in which 16 specialist doctors checked about 300 patients and performed 83 surgeries.

Chennai Math distributed buttermilk and sharbat to about 22,000 people on 8 and 9 April on the occasion of the annual Ratha Yatra and other celebrations of Sri Kapaleeshwarar Temple, Chennai. The centre also conducted a cleaning programme around the temple on 9 April. Detailed Report and Photos.

Sri Dharmendra Pradhan, Minister of State for Petroleum and Natural Gas, Government of India, inaugurated the first floor of the hostel building at Bhubaneswar centre on 11 April.

Purulia Vidyapith held the inaugural function of its yearlong diamond jubilee celebration on 12 April, with a public meeting and a cultural programme.

The renovated primary school building on Uripok campus of Imphal centre was inaugurated on 19 April. Detailed Report and Photos.

Swami Shivamayanandaji inaugurated the dining-hall at Puri Math on 21 April and the extension to the monks’ quarters at Puri Mission Ashrama on 24 April.

A facility for Siddha Vaidya treatment was inaugurated at Delhi centre on 24 April.

International Foundation for Environment and Ecology, Kolkata, and Confederation of Indian Universities, New Delhi, have jointly conferred ‘Young Scientist of the Year 2016’ award on a professor of Botany at Chennai Vidyapith.   The award carrying a shield and a certificate was handed over at a programme held in Ranchi on 27 March.

A student of Chennai Vidyapith has been awarded a scholarship of 37,000 euros (about 26 lakh rupees) by Education, Audiovisual and Culture Executive Agency, a unit of European Union, for pursuing his master’s degree in Nuclear Physics in Europe.

Vivekananda Centenary College of Rahara centre has been conferred autonomous status by the University Grants Commission (UGC) for six years (from 2017-18 to 2022-23).

UGC has included Vivekananda University under section 12B of UGC Act, 1956.  This confers eligibility to the University to receive grants from UGC.

Ranchi Morabadi centre conducted an eye care programme from 22 March to 21 April in which eye check-up of 2238 persons was done and 26 patients were operated upon for cataract.

Cooch Behar centre held a youths’ convention on 3 April in which 229 students and 18 teachers took part.

Delhi centre held 30 values education workshops from 3 to 29 April which were attended by 2675 principals and teachers. The workshops were held in nine states apart from Delhi.

Jalpaiguri centre, together with Kankurgachhi Math, held values education workshops at 24 educational institutions in Jalpaiguri and Cooch Behar districts from 4 to 8 April.  In all, 800 students took part in the workshops. Detailed Report and Photos.

Kamarpukur centre carried out a cleanliness drive on 23 April in which 88 people participated.

Mangaluru centre conducted 70 cleaning drives in and around Mangaluru on five Sundays in the month of April in which altogether 4860 volunteers participated.  The centre also held seminars in four educational institutions from 2 to 5 April in which 1200 youths took part.

Mysuru Ashrama conducted four cleaning drives between 2 and 23 April in which about 1200 volunteers took part. Besides, programmes to spread awareness about cleanliness were held. Detailed Report and Photo.

Dhaka Ashrama (Bangladesh) arranged a free Medical Camp on 4 April, to serve the devotees converged at Langalbandh, Narayanganj, a great place of pilgrimage for a dip in the holy water of the Brahmaputra, on the occasion of Ashtami Snana. Report and Photo.

We record with sorrow the passing away of Swami Dhyaneshananda (Paresh) at Seva Pratishthan hospital on 9 April at 6.20 am.  He was 79 and had been suffering from advanced stage of Parkinsonism for some years.  Initiated by Swami Vireshwaranandaji Maharaj, he joined the Order in 1966 at Saradapitha centre and had Sannyasa from his Guru in 1976.  He spent most of his active monastic life at Saradapitha.  Since 1999, he had been living a retired life at Belur Math.  The Swami was simple, austere and amiable by nature.