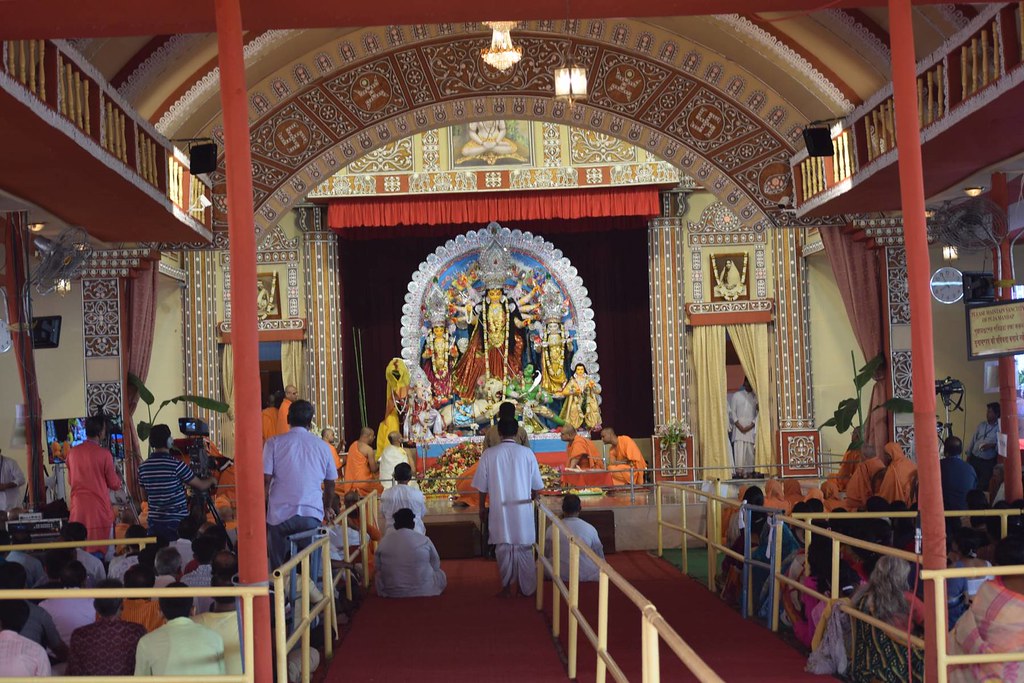 Revered President Maharaj will visit Kamarpukur and Jayrambati from 14 to 30 November.  He is keeping well.

Swami Vagishananda ji will visit Mumbai and Aurangabad from 13 to 26 November.  He is keeping well.

Swami Gautamananda ji, now at Belur Math, will return to Chennai Math on 5 November.  He will visit Delhi, Vrindaban and Aurangabad from 9 to 19 November, Bengaluru from 21 to 24 November, and Silchar and Karimganj from 25 November to 2 December.  He is in good health.

Swami Prabhananda ji will visit the Institute of Culture, Kolkata, from 9 to 16 November.  He is keeping well.

Swami Shivamayananda ji is scheduled to visit Aurangabad from 14 to 18 November, and Taki from 29 November to 3 December.  He is in good health.

Swami Suhitananda ji is scheduled to visit Naora from 9 to 12 November, and Bangladesh from 19 November to 1 December.  He is in good health. 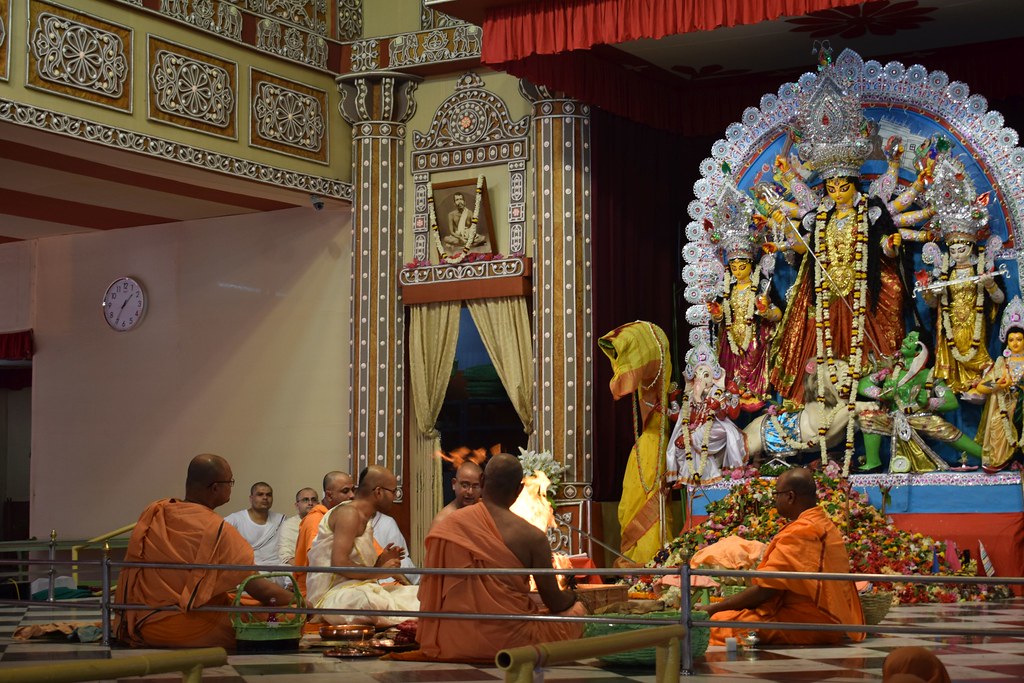 Durga Puja was celebrated at Belur Math from 16 to 19 October with due solemnity and joy.  The weather was fine on all four days, and lakhs of devotees attended the Puja to receive the blessings of the Divine Mother.  The Kumari Puja performed on 17 October drew huge crowds, and the Sandhi Puja on that day was also attended by thousands of devotees.  Cooked prasad was served to nearly 57,000 devotees on the Ashtami day and, in total, to about one and a half lakh devotees during the four days.  Sri Suresh Prabhu, Minister of Commerce & Industry and Civil Aviation, Government of India, attended the Puja on the Navami day. Photos and Videos. 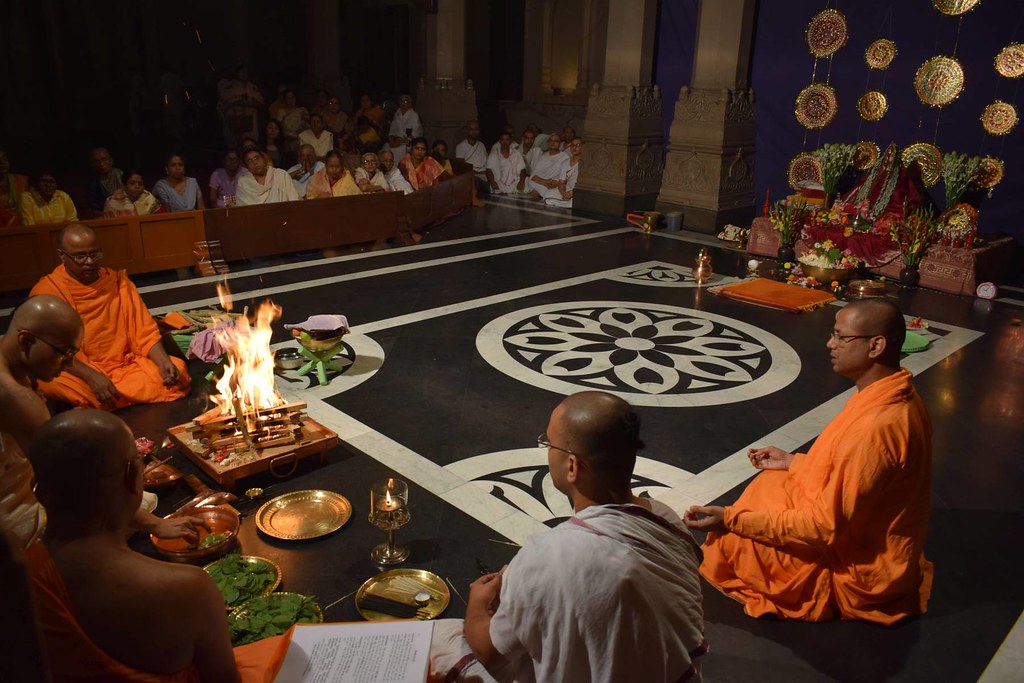 Lakshmi Puja was celebrated at Belur Math on 24 October 2018. Photos

A new branch centre of the Ramakrishna Mission has been started in Yadadri Bhuvanagiri district, near Hyderabad, in Telangana.

Postal Address: The Postal Index Number (PIN) of Antpur centre has been changed to 712408.

Silchar: A devotees’ convention on 6 October and students’ conventions on 7 and 8 October, which were attended by about 1600 people, in all. Photos and Report

Chicago, USA:  A symposium on ‘Vedanta’ at Vivekananda Retreat, Ganges, on 29 September, and an interfaith meet in Chicago on 30 September, which were attended by about 400 people. Photos and Report.

Kathmandu, Nepal: A public meeting on 29 September attended by about 300 people.

Coimbatore Mission Vidyalaya: An online quiz competition from October 2017 to September 2018 in which 3308 students from 9 colleges participated.

Katihar: Cultural competitions in September in which 210 students took part.

Visakhapatnam centre celebrated the diamond jubilee of its high school from 2 to 7 October with public meetings, a teachers’ workshop, an alumni meet and cultural programmes.  The General Secretary presided over the public meeting held on 6 October.  A commemorative volume was also released on the occasion. Photos and Report

Ramakrishna Math, Shyampukur Bati, recently purchased a nearby four-storey building for extension of its activities.  The General Secretary inaugurated the building on 3 October, the sacred birthday of Swami Abhedanandaji Maharaj.

In the concluding phase of its year-long diamond jubilee celebration, Purulia Vidyapith held the following programmes from 5 to 10 October: public meetings, an alumni meet, cultural competitions for school students, two seminars for college students and teachers, educational exhibition, dramas and musical concerts.  A good number of former students of the Vidyapith, students and teachers from different educational institutions, and devotees attended the programmes. Photos and Report

On 9 October, Sri Pema Khandu, Chief Minister of Arunachal Pradesh, and Sri Kiren Rijiju, Union Minister of State for Home Affairs, laid the foundation stone for the residential school and other buildings of Lumdung centre.  A number of state legislators, government officers, and about 5000 people attended the programme.

Coimbatore Mission Vidyalaya conducted a state-level basketball tournament on 28, 29 and 30 September in which 16 teams participated. Photos and Report

Ramharipur centre held a medical camp on 2 October in which about 600 people from 20 villages were treated by 11 doctors.

Coimbatore Mission Vidyalaya conducted three cleaning drives in September in which the Vidyalaya students cleaned a school, a temple and a public road.

Gadadhar Ashrama conducted three students’ conventions on 24, 25 and 26 September at three schools in Hooghly district, which were attended by about 900 students in all.

Swami Gautamananda ji inaugurated the new extension to the monks’ quarters at Durban centre on 28 September.

New images of the Holy Trio were installed in the shrine at the Ganges retreat of Chicago centre, USA, on 29 September.

Swami Raghunathanandaji (Ram Maharaj) passed away at Seva Pratishthan, Kolkata, on 1 October at 5.10 pm.  He was 84 and had been suffering from an advanced stage of myeloma (a type of bone marrow cancer) for the last few months.  Initiated by Swami Shankaranandaji Maharaj, he joined the Order in 1954 at Shillong centre, and received sannyasa diksha from Swami Madhavanandaji Maharaj in 1964.  He served as an assistant at the Headquarters and Shillong, Varanasi Home of Service, Singapore, Coimbatore Mission (for a short period), Saradapitha, Salem and Lucknow centres and also as the head of Shillong, Ootacamund, Muzaffarpur and Chapra centres.  Further, he participated in various relief operations at different times.  He retired from active life in 2010, and since then he was staying mostly at Belur Math.  The swami was an admirer of classical music, and was known for his affectionate, jovial and sociable nature.

Swami Raghuttamananda (Shubhrangshu of Varanasi Advaita Ashrama) expired at our hospital in Varanasi on 3 October at 11.30 pm owing to dengue shock syndrome and renal failure.  He was 54 and had been suffering from orthopedic problems for some years.  Initiated by Swami Bhuteshanandaji Maharaj, he joined the Order at Rajamahendravaram (Rajahmundry) centre in 1990 and received sannyasa diksha from Swami Gahananandaji Maharaj in 2006.  He served at Rajamahendravaram, Jayrambati, Antpur, Vrindaban, Patna, Puri Math, Ranchi Sanatorium, Lucknow, Dehradun, Kamarpukur, Chapra (for a short time), Port Blair, Barasat and Baranagar Math centres.  He had been staying at Varanasi Advaita Ashrama since April 2014.