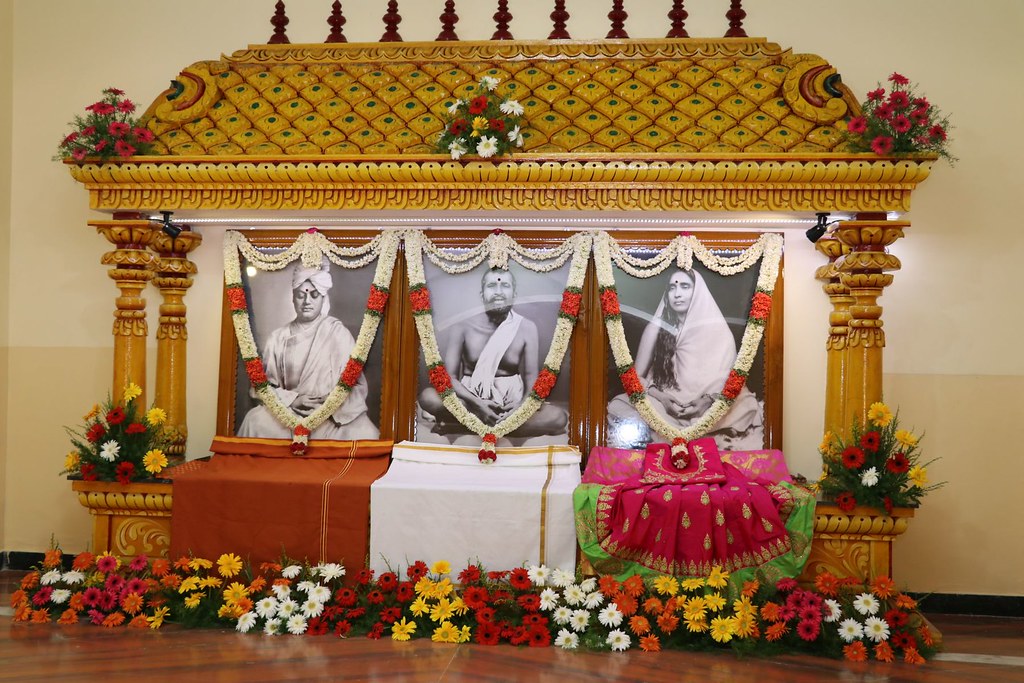 Revered President Maharaj will visit Swamiji’s Ancestral House, Kolkata, from 20 to 28 July.  He is in good health.

Swami Vagishananda ji will be visiting Kalyani in West Bengal from 26 to 28 July.  He is keeping well.

Swami Gautamananda ji is scheduled to visit Belgharia, Jhargram, Garbeta, Somsar and Belur Math from 2 to 12 July, and Varanasi, Prayagraj, Lucknow and Kanpur from 17 to 25 July.  He is in good health.

Swami Prabhananda ji will visit Baghbazar centre from 19 to 30 July.  He is keeping well.

Swami Shivamayananda ji is scheduled to return to Kankurgachhi Math on 4 July after his visit to Jabalpur.  Subsequently, he will be visiting Silchar from 17 to 21 July and Putunda (in Bardhaman, West Bengal) from 29 July to 2 August.  He is in good health.

Swami Suhitananda ji is scheduled to return to Belur Math on 5 July after his visit to Guwahati.   He will be visiting Jhargram from 18 to 20 July, and Cooch Behar from 23 July to 5 August.  He is in good health.

Sri Ramakrishna Educational Society, Villupuram, was taken over by the Ramakrishna Mission, and a new branch of the Mission started functioning there.  It was formally inaugurated on 2 June, the sacred Phalaharini Kali Puja day.  Swami Gautamanandaji presided over the inaugural programme which was attended by about 2000 people comprising monks, devotees, staff and students. Photos and Report

Thiruvalla Math has launched a website with address thiruvallaashrama.org

San Diego sub-centre of Hollywood centre has a website with address sandiegovedanta.org

Thiruvananthapuram centre has changed its website address to srkhospital.org

Commemoration of the 125th Anniversary of Swami Vivekananda’s Addresses

Almora: Cultural competitions in the months of May and June in which a total of 2794 students from 30 educational institutions took part.  Further, a programme comprising talks, recitations and music was held on 9 June; it was attended by about 500 students and 100 parents and teachers.

Asansol: A youths’ convention and a lecture programme on 22 June which were attended by nearly 600 people.

Kankhal: Quiz and elocution competitions on 11 May in which 88 students from 22 schools participated.  The winners were given prizes in a programme held on 1 June.

Mangaluru: Lecture programmes in 6 colleges in the month of June which were attended by 2450 youths in all.

Mumbai: A public meeting at the Gateway of India, Mumbai, on 31 May which was attended by 250 people.

Rajkot: A lecture programme on 11 June which was attended by 150 persons.

Shimla: A youths’ convention and a devotees’ convention on 15 and 16 June in which respectively 59 college students and 52 devotees took part.

Vadodara: A lecture programme on 9 June which was attended by 325 persons.

At Johannesburg sub-centre: A seminar on 19 June in which 100 delegates took part.

Vadodara centre held a summer camp for children from 12 to 19 May in which 125 children took part.  The programme included chanting, bhajans, yogasanas, values education programmes, etc.

Kankhal Sevashrama observed its 119th Foundation Day on 1 June.  The Governor of Uttarakhand Smt Baby Rani Maurya and Vice-President of our order Swami Shivamayanandaji addressed the public meeting held in this connection and also inaugurated the following units at the Sevashrama’s hospital: an operation theatre complex, ICU, surgical ward, emergency department and CT scan facility.  About 1000 people attended the function.

The first floor of Vijnanananda Sadhu Nivas at Kanpur Ashrama was inaugurated by the General Secretary on 3 June.

As part of its centenary celebrations, Salem Ashrama conducted (i) a conference for medical students on 13 June which was attended by 500 medicos from seven colleges, and (ii) a special programme for sanitation workers of Salem Municipal Corporation on 22 June in which 100 workers took part. Photos and Report

Eight students of Deoghar Vidyapith secured above 95 percentile in the NEET 2019.

Aalo centre held 20 ENT camps from 28 May to 20 June in which 903 patients were examined.  The centre also conducted a health awareness programme in a nearby village on 12 June which was attended by 70 people.

On the World Environment Day on 5 June, Aalo centre arranged talks and screening of documentaries for school students on environmental hazards and the means to prevent them.  Nearly 350 students attended the programme.

Swami Prabhanandaji laid the foundation stone for the proposed monks’ quarters (Chandramani Bhavan) at the Viveknagar campus of Agartala centre on 18 May, the sacred Buddha Purnima. Photos and Report

Guwahati Ashrama conducted a free medical camp during Ambubachi Mela near Kamakhya Temple from 22 to 25 June in which 7622 patients were treated.

Jammu centre observed the World Environment Day on 5 June by holding a public meeting in which about 200 people participated.  In the run-up to the event, the centre had conducted a drawing competition on the theme ‘Green Earth, Beautiful Earth’ on 2 June in which 120 youths took part.

The General Secretary inaugurated the digital cath lab at Lucknow hospital on 1 June.

On the occasion of the World Environment Day on 5 June, Narottam Nagar centre planted 340 saplings on the centre’s campus. Photos and Report

Swami Gautamanandaji laid the foundation stone for the proposed community hall and monks’ quarters on the Nagachi campus of Ramanathapuram centre on 6 June.

On 27 June, the General Secretary laid the foundation stone for the proposed boys’ high school building at Shivanahalli centre and also inaugurated the new computer section at the centre’s school. Photos and Report

Taki centre held parents’ counselling programmes at two places in North 24 Parganas district on 29 June in which a total of 150 parents participated.

The following centres observed the International Yoga Day on 21 June with yogasana demonstrations and talks: Chandigarh, Jammu, Kochi, Madurai, Pala, Ponnampet and Rajkot (including its Ahmedabad sub-centre). Photos and Report

Further, Delhi centre conducted 12 eye surgeries at its clinic and gave 27 spectacles to patients in May.  All the patients were selected from the eye camp held by the centre in April.

Mangaluru Ashrama conducted the following activities in June: (i) five cleanliness drives in Mangaluru involving 2150 volunteers, (ii) awareness campaigns for 25 days in which volunteers reached out to 1600 households in different parts of Mangaluru city, spreading awareness about waste management, (iii) cleanliness drives in 106 villages of Dakshina Kannada and Udupi districts, (iv) talks on cleanliness in 130 schools of Dakshina Kannada district which were attended by about 13,000 students, and (v) magic shows on the cleanliness theme in 19 schools in Udupi district.

Delhi centre conducted 49 values education workshops in 16 states and 2 union territories between 27 May and 14 June; the workshops were attended by a total of 2767 teachers.

Rajkot centre conducted a leadership training programme on 27 May in which 270 youths took part.  The centre also held a programme on 29 May to raise the morale of the students who had failed in board examinations.  The programme was attended by 50 students and their parents.

Salem centre held motivational talks at two schools in Salem on 14 and 15 June.

Shillong Ashrama conducted a seminar on the topic ‘use and abuse of modern gadgets’ on 10 June in which 55 teachers from 12 schools took part.

Silchar centre held a values education programme on 1 and 2 June in which 374 students and 78 teachers participated.

Taki Ashrama conducted values education programmes at two schools in North 24 Parganas district on 21 June in which a total of 325 students took part.

Germany centre is in the process of consolidating its three establishments (in Berlin, Mühlheim and Bindweide) into a single establishment.  As part of this exercise, the activities of its sub-centre at Mühlheim, near Frankfurt, were brought to a close on 25 May.  All correspondence with the centre should henceforth be directed to its facility in Berlin.

We record with sorrow the untimely passing away of Swami Antaratmananda (Shivashankar) at Belur Math in the night between 14 and 15 June.  He was 67 and had been suffering from insomnia and depression for a couple of years.  An initiated disciple of Swami Vireshwaranandaji Maharaj, he joined the Order at Belur Math in 1976 and received sannyasa Diksha from Swami Gambhiranandaji Maharaj in 1986.  He spent his entire monastic life at Belur Math, serving at the headquarters office for 7 years and at Belur Math museum for 32 years.  Kind-hearted and unassuming by nature, he was respected for his ascetic lifestyle and voluntary service to old and sick monks at the Math, which he rendered quietly, regularly and devotedly for many years.