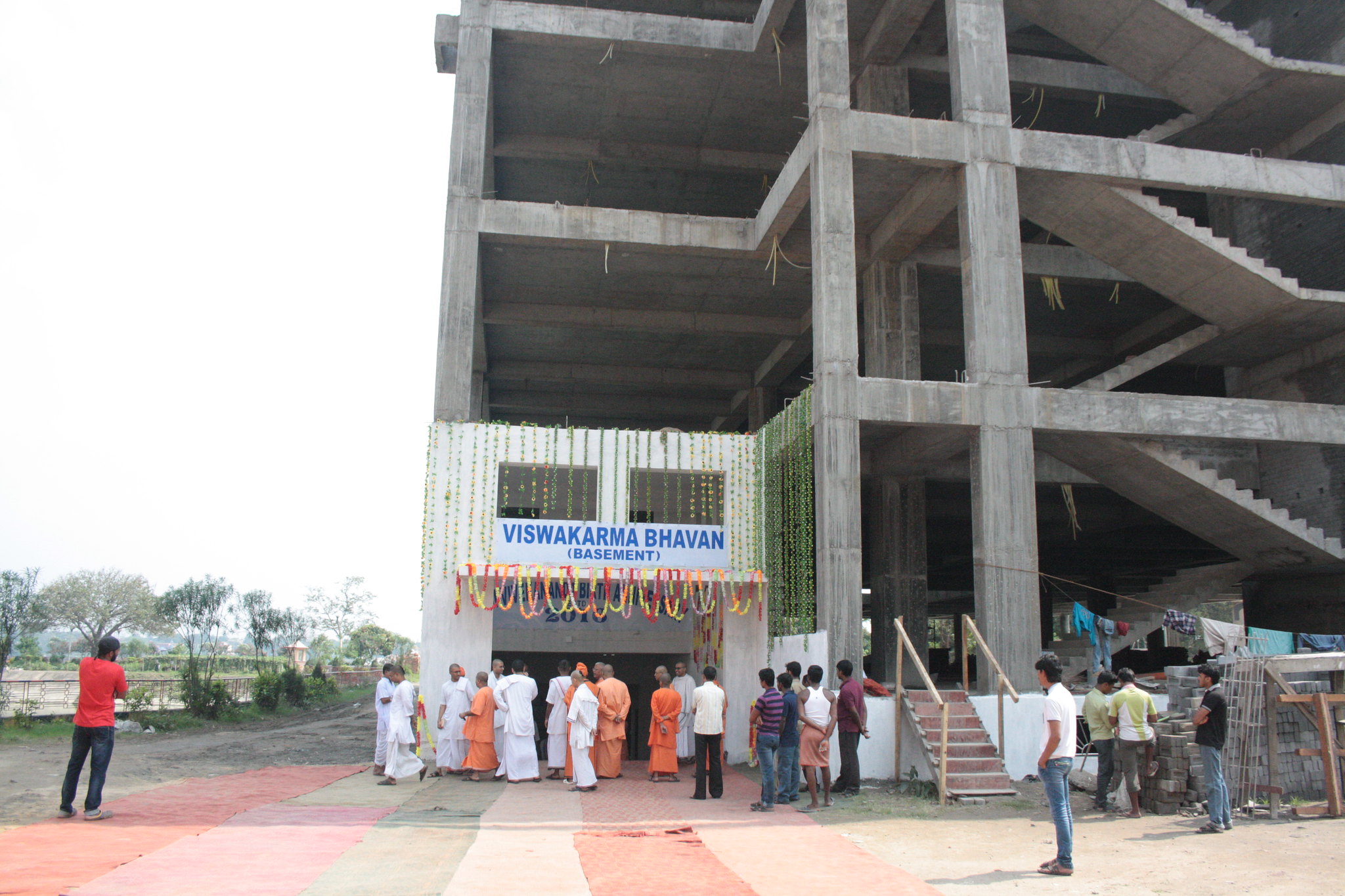 Swami Atmasthanandaji, President, Ramakrishna Math & Ramakrishna Mission, who has been undergoing treatment at Seva Pratishthan hospital, Kolkata, for the last one year, had urinary tract infection with high fever and episodes of low blood pressure towards the middle of the last month.  His health condition was stabilized with intensive medical care.  He continues to be at Seva Pratishthan.

Swami Smarananandaji, Vice-President, will be visiting Gol Park and Narendrapur centres from 15 to 27 March.  He is keeping well at Belur Math.

Swami Vagishanandaji, Vice-President, is scheduled to visit Barisha from 4 to 6 March and Balaram Mandir from 17 to 19 March.  Now at Cossipore Math, he is in good health.

Swami Prabhanandaji, Vice-President, underwent knee replacement surgery on his left knee on 25 February at a hospital in Kolkata.  He is recovering well in the hospital.

Swami Smarananandaji, Vice-President, Ramakrishna Math & Ramakrishna Mission, inaugurated the Maintenance Block on the basement of the partially constructed kitchen complex near the Water Treatment Plant at Belur Math on 29 February.

A new branch centre of the Ramakrishna Mission has been started at Gurap in West Bengal.  The address of the centre is “Ramakrishna Mission Ashrama, Vill. & PO: Gurap, Dist. Hooghly, West Bengal 712303”, phone no. (03213) 232400, email id <[email protected]> and website <www.rkmgurap.org>.

Celebration of the 150th Birth Anniversary of Swami Trigunatitanandaji

Naora Math held a two-day programme with special worship, a discourse and cultural events on 12 and 13 February.

Guwahati centre conducted a lecture on 18 January which was attended by about 550 people.

Mangaluru centre held a programme on women empowerment on 15 February in which about 650 young women took part.

Email IDs:  The following centres have got new email ids shown against their names:

The following centres have discontinued their email ids mentioned against their names:

Swami Vivekananda, on his arrival at Madurai on 2 February 1897 after his triumphant return from the West, was given a reception and Swamiji gave an address in reply.  In commemoration of this event, Madurai Math held a special function on 2 February 2016 which was attended by about 600 people.  Leaflets containing the address of welcome given to Swamiji at Madurai and his reply to it were distributed among the audience.

To mark the completion of ten years of consecration of its Sri Ramakrishna Temple, Nagpur Math held cultural competitions, public meetings and a devotees’ convention from 8 to 10 February.

Swami Gautamanandaji inaugurated the newly installed Digital Mammography System, an equipment used for detection of breast cancer, at our Lucknow hospital on 24 February.  Ours is one of the few hospitals in Uttar Pradesh to have this advanced equipment.

College of Arts and Science of Coimbatore Mission centre has been re-accredited by NAAC (National Assessment and Accreditation Council) with Grade ‘A’.

Asansol centre conducted a medical camp at Gadhapathar, Asansol, on 22 January in which 328 patients were treated by 8 doctors.

Madurai Math held an acupuncture camp on 21 February in which 103 patients were treated.

Medinipur centre conducted a free medical camp on the premises of a school in a backward area under Sadar block in Paschim Medinipur district, on 26 January.  Twelve doctors, including three pediatricians, one gynecologist and one dentist, treated 1474 patients.  In all, 86 patients underwent ECG and blood sugar tests.

Vrindaban Sevashrama conducted diabetes and hypertension camps at Vrindaban and Radhakund in Mathura district in January and February in which about 1000 aged and poor women were screened.  Oral medicines and insulin were provided to the patients as per their requirement.

The following centres conducted cleanliness drives in their respective areas and raised public awareness about cleanliness:

Baghbazar Math, Kolkata, conducted a cleaning programme on 30 January in which 60 students of its self-employment centre cleaned the locality around the Math.

Students of Bhopal school cleaned a few public places and a street on 2 and 3 February.

The polytechnic of Chennai Students’ Home held five cleaning programmes in January and February in which about 250 students and staff of the institution cleaned several streets and other public places.

Kamarpukur centre carried out its third cleanliness drive on 21 February in which 31 people cleaned a few streets in and around Kamarpukur village.

Mangaluru centre held a special programme on 14 February to mark the conclusion of the first phase of its 40-week cleanliness drive Swachchha Mangaluru.  Sri Venkaiah Naidu, Union Minster for Urban Development, and many other eminent people attended the programme.  Further, the centre conducted four cleaning programmes in February in which about 1500 people cleaned different areas in Mangaluru.

Puri Mission Ashrama conducted a cleanliness drive on 22 January in which the campus of a primary school in Puri was cleaned.

Students and teachers of Ramharipur high school undertook the cleaning of a few public places and a street on 8 February.

Delhi centre conducted (i) A two-day training programme in values education for 115 teachers of government schools on 19 and 20 January, (ii) A youth convention on 30 January in which 750 youths participated, (iii) Two workshops for school principals on 17 and 18 February which were attended altogether by 106 teachers, mainly principals.

Jammu centre held values education programmes in Udhampur, Jammu and Samba districts on 5, 13 and 17 February, which were attended altogether by 1550 people.

Salem Ashrama conducted values education programmes at three colleges in Salem district from 27 January to 19 February.  In all, 810 students attended the programmes.

Swami Pavitratmanandaji (Prasenjit Maharaj), who had been posted to Singapore centre as an Assistant Swami, reached there on 25 February.

We are sorry to announce the passing away of two of our brother-monks.

Swami Haranandaji (Marvin Maharaj) passed away at a nursing centre in Portland, USA, on 8 February at 6.10 am local time (7.40 pm Indian Standard Time).  He was 83 and had been suffering from various old-age ailments for some years.  Initiated by Swami Asheshanandaji, he joined the Order in 1967 at Portland centre and had Sannyasa from Swami Ranganathanandaji in 2001.  All through his monastic life he served Portland centre with great sincerity and devotion, and was instrumental in building the shrines in Scappoose retreat.  Always positive in his outlook, the Swami was known for his large-heartedness and affectionate nature.

Swami Vishwarupanandaji (Shivaprasad / Shibu Maharaj) expired on 11 February at about 11.30 pm at a hospital in Kolkata owing to a heart attack.  He was 68 and had been suffering from diabetes and heart disease for some years. Initiated by Swami Nirvananandaji, he joined the Order in 1978 at Baghbazar centre and had Sannyasa from Swami Ranganathanandaji in 2001.  Besides his joining centre, where he spent his last years, he served at Belur Math and Barasat, Sargachhi and Baranagar Mission centres.  The Swami was simple and amiable by nature.