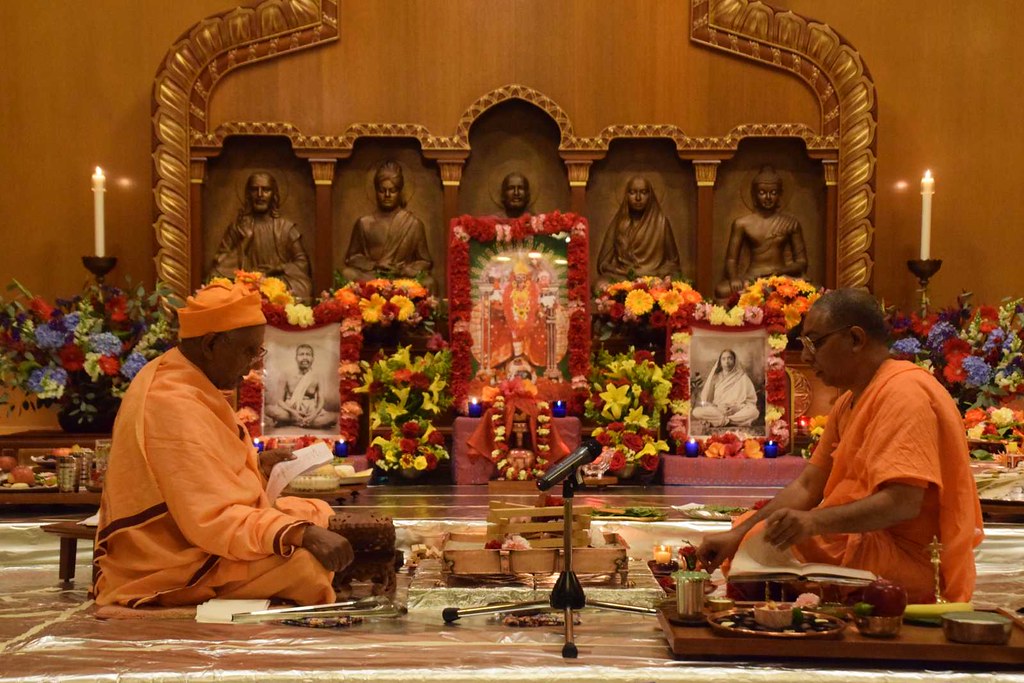 Swami Atmasthanandaji, President, Ramakrishna Math and Ramakrishna Mission, continues to be at Seva Pratishthan. Despite some minor setbacks in his health, Revered Maharaj’s condition is stable.

Swami Smarananandaji, Vice-President, is scheduled to return to Belur Math on 4 December after his visit to Baghbazar centre. He is keeping well.

Swami Vagishanandaji, Vice-President, is scheduled to visit Mumbai from 9 to 14 December.  Now at Cossipore Math, he is in good health.

Swami Prabhanandaji, Vice-President, is scheduled to visit Chandipur and Contai from 7 to 17 December.  He is keeping well.

Delhi centre held a discourse on Swami Abhedanandaji on 6 November which was attended by 180 devotees.

Celebration of the 150th Birth Anniversary of Swami Subodhanandaji Maharaj

Vijayawada centre held two youths’ conventions on 11 and 12 November in which altogether 1250 youths participated.  The centre also held a parents’ and teachers’ convention on 13 November which was attended by 355 people.

Baranagar Math held two programmes comprising talks and cultural programmes on 26 and 27 November which were attended altogether by 310 people.

Chandipur Math held a public meeting on 28 October which was attended by about 150 persons.

Chennai Math has produced a Tamil drama on Sister Nivedita in association with a drama troupe. First staged on 11 September, the drama was watched by about 500 people.

Dehradun centre conducted cultural competitions from 10 to 13 November in which 850 students from 35 schools of Dehradun participated.

Jaipur centre conducted a spiritual retreat on 27 November which was attended by 75 people.

Jalpaiguri Ashrama held a discourse on Sister Nivedita on 28 October which was attended by 70 people.

Jamtara Math conducted a special programme comprising procession, speeches and cultural programmes on 28 October in which about 100 students and others participated.

Kadapa centre held a youths’ convention on 18 November which was attended by more than 1000 youths from 16 colleges in and around Kadapa. Click here for report.

Kanpur Ashrama held a doctors’ convention on 6 November in which about 50 doctors took part.

Malliankaranai centre held two programmes at Arpakkam and Kadalmangala villages on 9 and 31 October which were attended altogether by 220 people, mainly students.

Mysuru centre conducted a programme on 28 October which was attended by about 500 people, mainly students and teachers.

Ponnampet  centre  held  a  workshop  on  21  November  on  the  theme  ‘Role  of  soldiers  in maintaining the sovereignty of our country’ which was attended by 380 people.

Fax: Porbandar centre has discontinued fax facility on its existing telephone no. 2242231.

The newly installed lift at Varanasi Advaita Ashrama was inaugurated on 28 October.

Dr Raman Singh, Chief Minister of Chhattisgarh, declared open the new auditorium-cum-indoor stadium at Narainpur centre on 2 November.  The General Secretary presided over the programme which was attended by many dignitaries.  On the same day, the General Secretary inaugurated the newly built monks’ quarters and a hostel building.

The refurbished auditorium at Baranagar Math was inaugurated on 26 November.

Ramakrishna  Sevamandira,  the  rural  welfare  unit  of  Mysuru  Ashrama  at  Tenkalamole  in Chamarajanagar district, was inaugurated on 26 November. Click here for details.

The Middle School of Chennai Sarada Vidyalaya received the Best School Award for the year 2014-15 from the Government of Tamil Nadu. The award was handed over on 28 June 2016.

Dr Lobsang Tsetim, an ophthalmologist at our Itanagar hospital, received the Eye Health Heroes Award at the 10th General Assembly meeting of the International Agency for Prevention of Blindness held in Durban (South Africa) on 30 October.

The following centres conducted eye care programmes, details of which are given below :

Coimbatore Vidyalaya held a three-day residential youths’ convention from 25 to 27 November in which 1159 delegates participated.

Delhi centre conducted nine values education workshops in and around Delhi and Gwalior for school  principals,  teachers,  students  and  parents  from  3 October  to  9  November  which  were attended by 917 people in all.

As  a  part  of  the  third    phase  of  Swachchha  Mangaluru,  Mangaluru  Ashrama  conducted 59 cleaning drives in and around Mangaluru on five Sundays between 30 October and 27 November. In all, about 5000 volunteers participated in these drives. Click here for report and photos.

Coimbatore Mission centre conducted two cleaning drives in November in which 82 students cleaned a few public places including a temple.

The renovated Old Temple of San Francisco (USA) centre was rededicated on 29 October, the Kali Puja day.  The two-day programme held on this occasion included special worship, speeches, music, an audio-visual presentation on the Old Temple, and release of a commemorative volume. Click here to see more photos.

Mymensingh (Bangladesh) centre celebrated its centenary by holding a symposium for students and youths on 11 November.