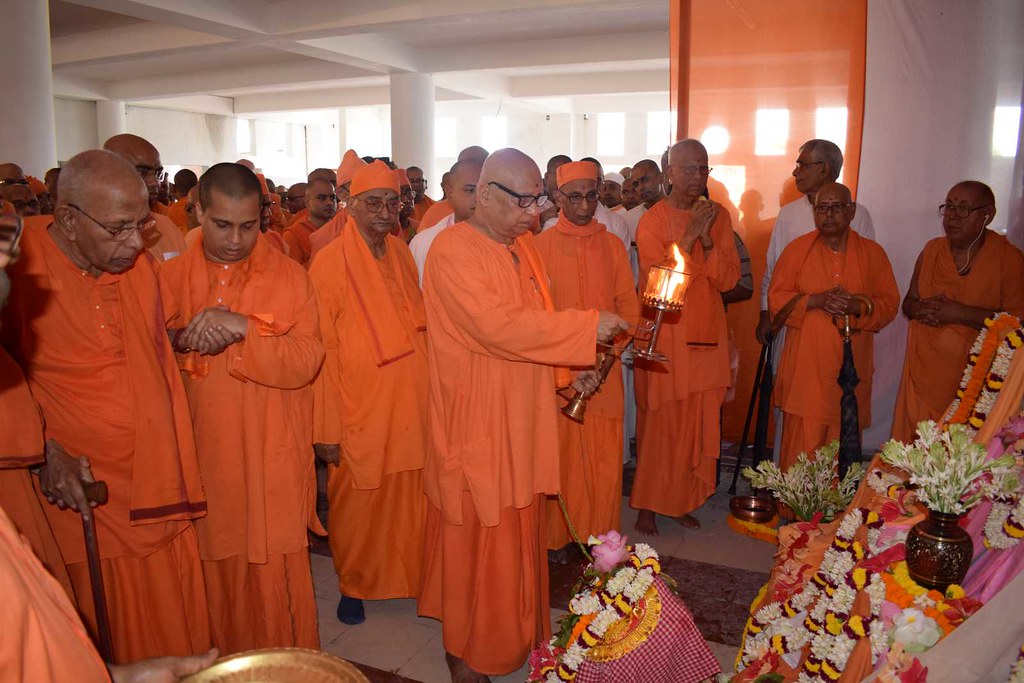 Swami Smarananandaji, Vice-President, returned to Belur Math on 25 September from Narendrapur.  He is scheduled to visit Gol Park and Kankurgachhi centres from 24 October to 11 November.  He is keeping well.

Swami Prabhanandaji, Vice-President, is scheduled to return to Belur Math on 3 October after his visit to Baghbazar, Narendrapur and Gol Park centres. He is keeping well.

A sub-centre of Ramakrishna Mission, directly under the supervision of the Headquarters, has been started at Burdwan.

Jammu centre conducted special worship, devotional music and a lecture on 24 September which were attended by about 120 devotees.

Chennai Math held a drama on Sister Nivedita and released a DVD containing a hari-katha (discourse intermingled with songs) on her on 11 September.

Hyderabad centre conducted a special lecture on 9 September which was attended by about 600 teachers.

Jalpaiguri centre held a public meeting on 4 September at Farabari in Jalpaiguri district which was attended by 550 people.

Kadapa centre held a workshop for teachers from 9 to 11 September in which 70 teachers participated.

Port Blair centre held a youth convention on 28 August in which about 100 students took part.

Vadodara centre  conducted  a  youth  convention  on  18  September  which  was  attended  by 100 youths.

Deoghar centre served lemonade to 8200 pilgrims during the Shravani Mela from 20 July to 18 August.

The newly constructed first floor of monks’ quarters at Bhubaneswar centre was inaugurated on 25 August, the holy Janmashtami day.

The headmistress of the primary school of Chengalpattu centre has received Dr Radhakrishnan Best Teacher Award from the Govt of Tamil Nadu.  The award comprising a medal, a citation and a cash prize of Rs. 10,000 was handed over to her on 5 September, the Teachers’ Day.

On 11 September, Swami Gautamanandaji inaugurated the new community welfare centre building constructed by Chennai Math at Meyyur village in Tiruvallur district, as a part of its rural development activities there. Click here for report and photos.

Chennai Math held a two-day workshop on yoga on 10 and 11 September in which about 200 people participated.

Sri  V  Shanmuganathan,  Governor  of  Meghalaya,  visited  Coimbatore  Mission  centre  on 20 September  and  gave  away  prizes  to  the  students  who  had  won  the  cultural  competitions organized by the centre.

The Industrial Training Institute (ITI) of Agartala centre has received ISO 9001:2015 certificate for a period of three years.

A student of Medinipur school secured the 9th rank and a student of Rahara centre the 10th rank in the West Bengal Joint Entrance Examinations (Medical) conducted this year.

All the 23 students of Chandigarh students’ home who appeared in Class 12 examinations 2016 conducted by CBSE and other boards passed with the first division marks (60% or above); 21 of them secured star marks (75% or above).

Hyderabad Math observed the 17th foundation day of its Vivekananda Institute of Human Excellence by holding a teachers’ convention, a youths’ convention and a volunteers’ meet from 9 to 11 September.  In all, about 3900 people took part in these events. Subedar Yogendra Singh Yadav, Param Vir Chakra in an inspirational speech narrates about the sacrifices they made protecting our Motherland. Watch Video : Part 1 | Part 2

Madurai Math conducted a medical camp on 4 September in which 168 patients were treated. See more photos.

On 11 September, Rajamahendravaram (Rajahmundry) centre conducted a free medical camp at Rampachodavaram, a place mostly inhabited by tribal people.  A team of 15 doctors, including a few specialists, treated 898 patients.

The results obtained by the students of Vivekananda Institute of Medical Sciences of  Seva Pratishthan at different examinations held in the year 2015-16 are as follows:

Ghatshila centre conducted an eye care programme in September in which eye check-up of 103 students was done.

Bengaluru Math held two spiritual retreats, one for college girls and another for college boys, on 11 and 18 September in which altogether 1550 students participated.

Delhi centre conducted 41 values education workshops at different parts of India for school teachers and principals from July to September which were attended by 2882 people in all.

Mangaluru centre conducted three values education seminars on 1, 2 and 3 September for postgraduate  students,  college  lecturers  and  engineering  students  respectively.    In  all,  about

1250 people participated in the seminars.

Salem Ashrama conducted three values education programmes at three colleges in and around Salem in September which were attended by 579 students in all.

Vadodara centre held eight values education programmes at different educational institutions in Gujarat in August and September in which altogether 1545 students participated. Another programme for parents of students was held at a school in Vadodara on 20 August which was attended by 150 people.

Madurai  Math  conducted  a  personality  development  camp  on  10  September  in  which 282 students from a college in Madurai took part. Click here for report and photos.

Chepauk railway station in Chennai was cleaned on 22 September by 100 students and staff of Chennai Students’ Home polytechnic.  The students also campaigned for cleanliness.

Coimbatore Mission centre conducted five cleaning programmes in September in which a number of students cleaned premises of government offices, a hospital and a public road.

About 400 students, staff and monastic members of Narottam Nagar centre took part in cleanliness drives on 28 and 30 August and 3 September by cleaning residential areas near the centre.

Rahara centre held speeches, competitions and cultural programmes on cleanliness from 8 to 13 August in which about 2800 students and staff of the centre’s different institutions participated.

Vadodara centre conducted a public meeting on 28 September in which about 100 people took a pledge for a clean India.  Besides, films on cleanliness were screened in the meeting.

We record with sorrow the untimely and tragic demise of Swami Sadatmananda (Arun) at Belur Math on 25 September in the morning.  He was 64 and had been suffering from some psychiatric problems for several years.  An initiated disciple of Swami Vireshwaranandaji Maharaj, he joined the Order at Belur Math in 1976 and had Sannyasa from Swami Gambhiranandaji Maharaj in 1986. Besides Belur Math, he served at Advaita Ashrama (both at Mayavati and Kolkata).  He had been staying at Belur Math since 1986 carrying out some light assignments.