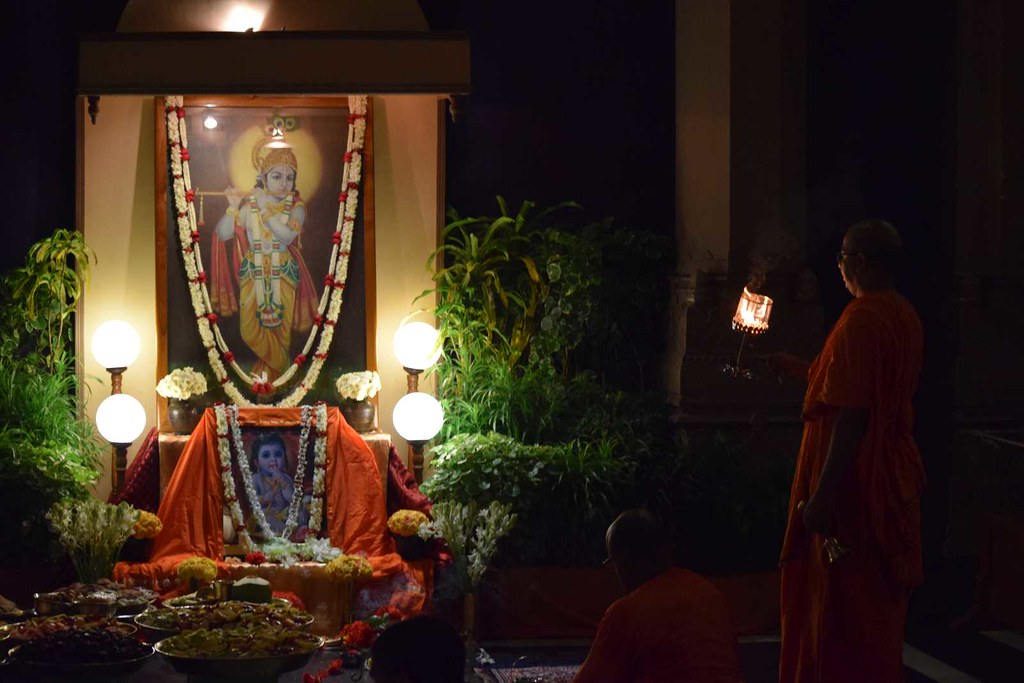 Swami Vagishanandaji, Vice-President, is scheduled to visit Belgharia centre from 6 to 8 September, and Thiruvananthapuram, Kochi and Halasuru centres from 15 to 25 September.  He is keeping well at Cossipore Math.

Swami Prabhanandaji, Vice-President, will be visiting Bankura and Purulia centres from 8 to 17 September, and Baghbazar Math from 23 to 29 September. He is keeping well.

Click here for the photos of Janmashtami Celebration at Belur Math

The centre’s address is:

Indore Ashrama held a spiritual retreat on 14 August in which about 125 devotees took part.

Jammu centre conducted a special programme comprising speeches and demonstration of Yogasanans on 14 August. About 130 school students took part in the programme.

Malda centre held a spiritual retreat on 21 August which was attended by about 400 devotees.

Nagpur Math conducted a special lecture on 6 August which was attended by 125 people.

Pune Math held a convention for college-going women on 13 August which was inaugurated by Sri C Vidyasagar Rao, Governor of Maharashtra.  On the next day a convention for working women was held. In all, about 700 women participated in the conventions. Click here for details.

Shillong centre conducted cultural competitions in July in which 3200 students from 120 schools and colleges in East Khasi Hills district took part. Prizes were awarded to 280 winners on 6 August.

Swamiji’s Ancestral House held a lecture on 19 August which was attended by 250 people.

Malaysia centre held special lectures, cultural programmes and a film show on 6 and 7 August.  Sri T S Tirumurti, High Commissioner of India to Malaysia, and about 200 devotees attended the programmes.

Singapore centre conducted a devotional music programme and a spiritual retreat on 8 and 9 August respectively. Click here for details.

Almora Ashrama has launched a website with address <www.rkmalmora.org>

The General Secretary inaugurated the newly constructed dispensary and multigym buildings at Hatamuniguda centre on 10 August.

The concluding programme of the year-long celebration to mark the centenary of the publication of  Prabuddha  Keralam,  the  Malayalam  monthly  brought  out  by  Thrissur centre,  was  held  on 12 August.  Swami Gautamanandaji presided over the programme which was attended by several eminent people and about 800 devotees.  A DVD containing digitized version of 100 years of the magazine was released on this occasion. Click here for details.

On the holy occasion of Krishna Pushkaram, a festival of the River Krishna which occurs once in 12 years, Vijayawada centre distributed food, buttermilk and milk to about 2.20 lakh pilgrims, and provided accommodation to about 2500 pilgrims, from 12 to 23 August.  The centre also conducted spiritual discourses and cultural programmes on this occasion. Click here for details.

Sri Basudeb Banerjee, Chief Secretary, Government of West Bengal, inaugurated the newly constructed third floor on the Swami Vivekananda Sesquicentenary Building of Sikshanamandira (a residential college of teacher education under Saradapitha) on 13 August in the presence of  the General Secretary and others.  The new floor has been built to house Swami Vivekananda Centre for Multidisciplinary Research in Educational Studies, a research wing of the college.

Chennai Math in association with two other organizations conducted National Awareness Convention  on  Leprosy  at  Central  Leather  Research  Institute, Chennai,  on  20 August.    Many eminent doctors, scientists and social activists addressed the convention.  On this occasion, Swami Akhandananda Award was conferred to an organization in Chattishgarh which is working for the elimination of leprosy.  Sri Jagat Prakash Nadda, Union Minister for Health & Family Welfare, and a number of other dignitaries attended the valedictory session.   A souvenir was also released in the convention which was attended by more than 300 people including about 100 leprosy-afflicted persons. Click here for details.

The eleventh convocation of Vivekananda University for the faculties of Disability Management and Special Education (DMSE) and General & Adapted Physical Education and Yoga (GAPEY) was held at the University’s faculty centre in Coimbatore Mission centre on 20 August.   In the same programme, the faculty of DMSE launched a quarterly magazine Wonders of Touch which is printed both in braille (for totally blind) and large-size regular characters (for partially blind).

Puri Math has put up a bookstall on platform no. 5/6 at Puri Railway Station.  It was inaugurated on 25 August.

A student of class 10 of our Medinipur school secured first rank in the 15th National Cyber Olympiad conducted by Science Olympiad Foundation, Gurgaon.  He was awarded a gold medal, a certificate and a sum of Rs. 50,000/- in a programme held in New Delhi on 12 June.

Medinipur centre conducted a free medical camp on the premises of a school in a backward area under Salboni block in Paschim Medinipur district, on 15 August.  Eleven doctors, including one pediatrician, two gynecologists and one dentist, treated 1056 patients.

A student of the hostel attached to Nagpur Math has secured the Best Student Award 2015-16 of Rashtrasant Tukadoji Maharaj Nagpur University.  The award comprising a certificate and a citation was handed over to him on 4 August.

The results obtained by our students of the following institutions at different exams conducted in 2016 are as follows :

Madurai centre conducted an Eye Camp on 21 August 2016 at the Math premises. Click here for details.

Ranchi Morabadi centre conducted an eye care programme from 22 July to 17 August in which eye check-up of 2073 children and 218 adults was done; free glasses were provided to 56 persons with refractory errors, and 5 patients were operated upon for cataract.

Nagpur Math conducted a youths’ convention on 6 August in which 250 youths participated.

Puri Mission Ashrama held a youths’ convention on 26 August in which 421 youths from different colleges and universities of Puri took part.

Coimbatore Mission centre held six cleaning programmes in August in which students from the various institutions run by the centre cleaned premises of a temple, a hospital, a government office and a few public roads.

Ghatshila Ashrama conducted cleaning drives on 21 and 27 July around the Ashrama campus and a local market area. More Photos.

Kankurgachhi centre held a cleanliness programme on 31 July at a nearby locality.

Naora Math conducted a few cleanliness drives from 26 to 30 June in which about 700 students from different coaching centres cleaned religious places, a playground and other public places. More Photos.

Students of Swami Vivekananda College of Fiji centre won the following prizes in the events mentioned below which were held in July and August:

We record with sorrow the passing away of Swami Shantinathananda (Shrinivas) at Varanasi Advaita Ashrama, on 30 August at 3.20 pm.  He was 76 and had been suffering from hypertension and other old-age ailments.  Initiated by Swami Vireshwaranandaji Maharaj, he joined the Order in

1969 at Bengaluru Math and had Sannyasa from his Guru in 1979.  Besides his joining centre, he served at Kamarpukur, Tiruvalla, Visakhapatnam, Allahabad, Mangaluru, Pune, Ponnampet, Chennai Students’ Home, Malliankaranai and Kadapa centres.  He had been living a retired life at Varanasi Advaita Ashrama for the last nine years. The Swami was simple, jovial and austere by nature.