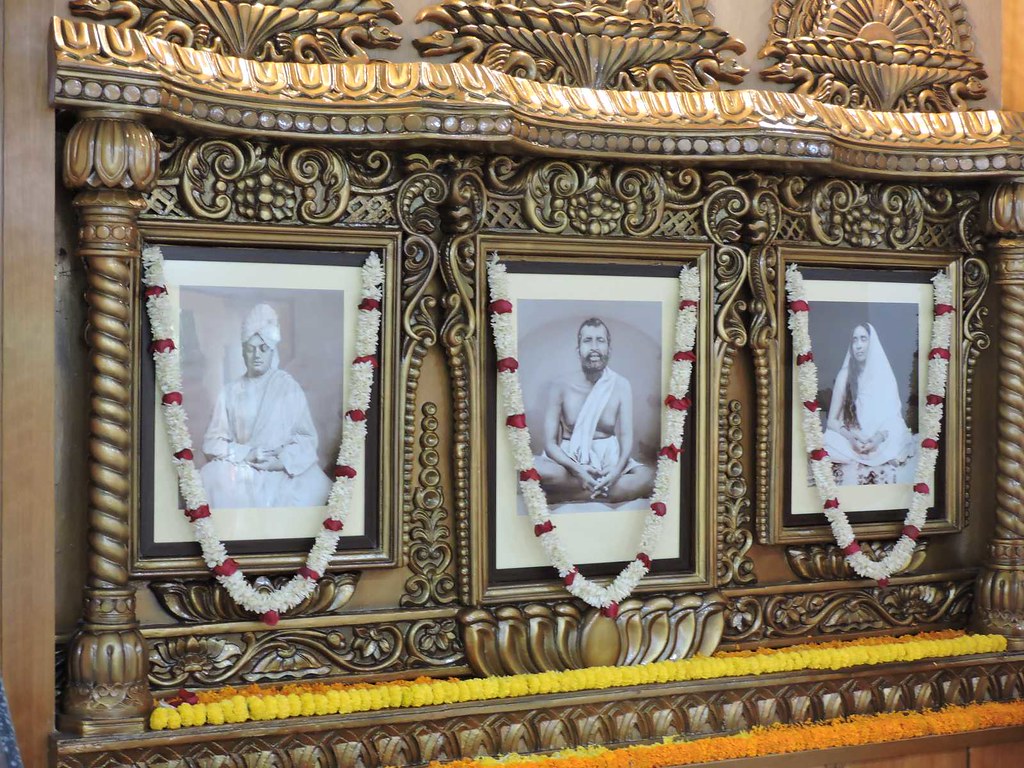 Most Revered President Maharaj, Swami Smaranananda ji, will be visiting Narendrapur from 23 to 28 January.

Swami Vagishananda ji, Vice-President, is scheduled to visit Nimpith in South 24 Parganas district from 16 to 20 January.

Swami Shivamayananda ji, Vice-President, is scheduled to visit Durgapur and Dhanbad from 13 to 22 January, and Narendrapur on 26 and 27 January.

Swami Suhitananda ji, Vice-President, will be visiting Antpur from 2 to 6 January, and Bardhaman, Asansol and Bankura from 16 to 28 January.

The birthday of Holy Mother was celebrated at Belur Math on Saturday, 9 December.  Thousands of devotees attended the celebration throughout the day.  Cooked Prasad was served to about 20,000 devotees.  Swami Balabhadrananda chaired the public meeting held in the afternoon. Photos |Audio | Video

The 108th Annual General Meeting of the Ramakrishna Mission was held at Belur Math on Sunday, 17 December.  Revered President Maharaj chaired the meeting.  In all, 136 monastic members, 61 lay members and 90 associates attended the meeting. Photos.

The administrative building of the Headquarters at Belur Math has been named Saradananda Bhavan.  Revered President Maharaj unveiled a dedication plaque, with the new name engraved on it, on 24 December, the sacred birthday of Swami Saradanandaji Maharaj. Photos.

The following centres held various programmes to commemorate the 150th birth anniversary of Sister Nivedita.  (The main programmes conducted by them are mentioned against their names.)

Bardhaman: A students’ convention on 10 December in which 250 students from 16 schools and 3 colleges took part. Report and Photos.

Barasat: A youths’ convention on 17 December attended by 650 people.

Coimbatore Mission Vidyalaya: A state-level Kabaddi tournament from 15 to 17 December in which 17 institutions competed.  Vidyalaya’s Maruthi College of Physical Education won the third prize in the tournament. Report and Photos.

Guwahati: A lecture programme on 28 December attended by nearly 300 devotees. A book on Sister Nivedita published by the centre in Assamese language was also released in the programme. Report and Photos.

Hatamuniguda: Quiz competitions from 18 to 26 November in which about 700 students and teachers participated.

Jalpaiguri (in association with Kankurgachhi Math):  A talk at an educational institution in Jalpaiguri on 21 December attended by 185 teachers and students.

Kankurgachhi: Five talks from 3 to 27 December, each of which was attended by about 300 devotees.

Narendrapur: A devotees’ convention on 10 December attended by about 300 devotees.

Rajamahendravaram: Cultural competitions from 1 to 6 December in which 5362 students from 43 schools took part. Report and Photos.

Swamiji’s Ancestral House: (i) Three lectures at the centre on 27 November and 1 and 6 December which were attended by about 1000 people, and (ii) nine lectures in and around Kolkata from 22 November to 20 December attended altogether by 3500 people.

Moscow, Russia: A public meeting at the Embassy of India in Moscow on 29 November which was attended by about 50 people.  Report and Photos.

Fax: Jayrambati centre has discontinued its fax facility with number 244222.

On 5 December, Ranchi Morabadi Ashrama held a conference for the executives of 120 units of Vivekananda Seva Sangha, village-level organizations formed by the former trainees of Divyayan Krishi Vigyan Kendra of the Ashrama for rural development in three districts of Jharkhand.  The Chief Minister of Jharkhand, the Chief Secretary, the Agriculture Secretary and some other high officials of the Government of Jharkhand addressed the conference, which was attended by 266 people. Report and Photos.

A student of Imphal school won a gold medal in the Asian Cup Jeet Kune Do (a martial art) Championship, held in Thailand by Asian Jeet Kune Do Federation from 24 to 28 November.

Mathrubhumi Publishing company, Kozhikode, presented two awards to the higher secondary school of Thrissur Math in recognition of the school’s efforts in protecting the environment.  The awards, consisting of mementos and 75,000 rupees in all, were distributed on 2 December.

Two students of the Sanskrit Department of RKMVERI (Ramakrishna Mission Vivekananda Educational and Research Institute), Belur, won the first and fourth prizes in a Sanskrit literary competition held at New Delhi jointly by BAPS Swaminarayan Research Institute, New Delhi, and Sri Somnath Sanskrit University, Veraval, Gujarat, from 15 to 17 December.  All the winners received certificates, mementos and cash prizes.  In all, 1000 students from different institutions all over India participated in the competition.

Twenty-two students of class 11 of Narendrapur Vidyalaya who had participated in the Junior Scholarship Test, 2017, conducted by Jagadish Bose National Science Talent Search, Kolkata, were awarded junior scholarship, and four other students received junior encouragement award.  Besides, the school won the Best School Award for the excellent performance of its students in the competition.

Narainpur centre conducted a three-day residential career guidance programme from 4 to 6 December which was attended by about 4200 students of Class 11 and 12, and 500 teachers.

On 10 December, Rajamahendravaram (Rajahmundry) centre conducted a free medical camp at Rampachodavaram, a place mostly inhabited by tribal people.  A team of 14 doctors, including a few specialists, treated 672 patients.

Coimbatore Mission Vidyalaya held a three-day residential youths’ convention from 1 to 3 December in which 984 delegates participated. Report and Photos.

Delhi centre held 9 values education workshops from 1 November to 1 December, which were attended by 540 teachers. The workshops were held in Delhi, Haryana, Uttar Pradesh and Rajasthan.  On 1 December, the centre distributed 90 LED projectors to the government schools in Ajmer.

Mysuru Ashrama conducted a written quiz competition on Swamiji from July to December in which about 36,500 students from 360 schools and colleges in Karnataka took part. State level toppers were awarded prizes on 30 December.

Salem Ashrama conducted three values education programmes at three colleges in Salem district in December which were attended by 629 students in all.

Mysuru Ashrama conducted 11 cleaning drives from September to December in which a number of volunteers cleaned 44 localities of the city.  The volunteers also campaigned in those places to spread awareness about cleanliness. Report and Photos.

Coimbatore Mission Vidyalaya conducted three cleaning drives on 7 and 8 December in which the Vidyalaya students cleaned a public road and the premises of a school and a government office.

Kamarpukur centre carried out a cleanliness drive at Kamarpukur village on 24 December.

Dhaka centre, Bangladesh, conducted a seminar on values-oriented education on 2 December in which Minister of Home Affairs Mr Asaduzzaman Khan, Government of Bangladesh, and some other distinguished people addressed a gathering of about 750 people. Report and Photos.