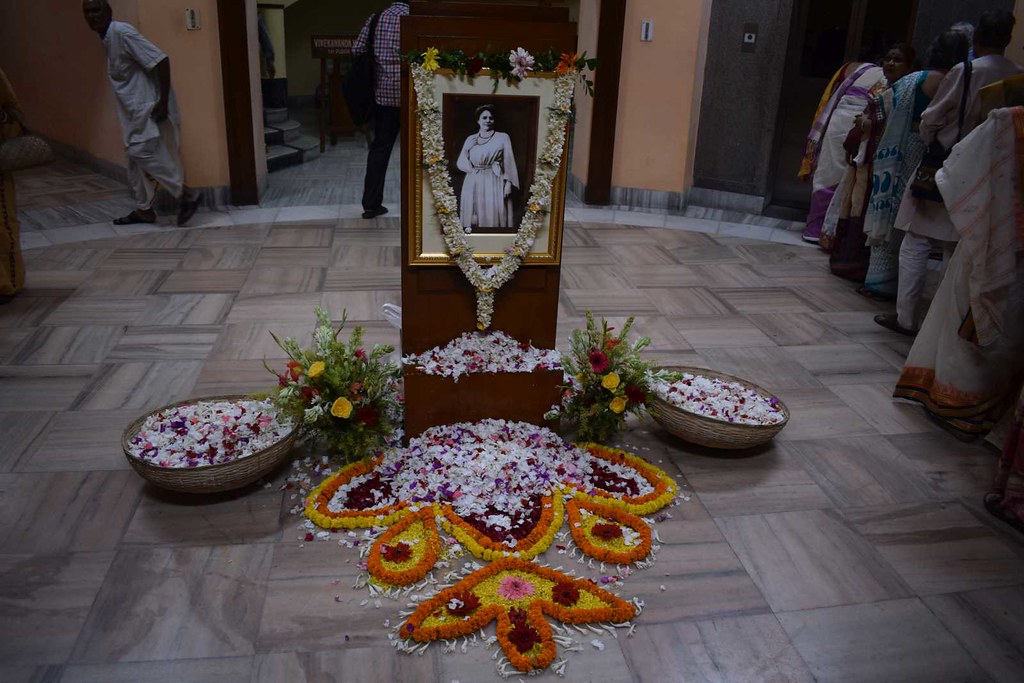 Srimat Swami Smarananandaji Maharaj, President, Ramakrishna Math and Ramakrishna Mission, Belur Math, is scheduled to visit Kamarpukur and Jayrambati from 14 to 27 November.  He is keeping well.

Srimat Swami Vagishanandaji, Vice-President, will be visiting Antpur from 5 to 9 November, and Ramharipur from 19 to 25 November.  He is keeping well.

Srimat Swami Gautamanandaji, Vice-President, is scheduled to return to Chennai on 5 November after his tour of Chandigarh, Shimla, Delhi, Srinagar and Jammu.  He will be visiting UAE, Zambia and South Africa from 11 November to 4 December.  He is in good health.

Srimat Swami Prabhanandaji,  Vice-President, will return to Belur Math on 10 November after his visit to Baghbazar Math.  He is keeping well.

Srimat Swami Shivamayanandaji,  Vice-President, is scheduled to return to Kankurgachhi on 24 November after his visit to Bangladesh.  He is in good health.

Srimat Swami Suhitanandaji,  Vice-President, will be visiting England from 10 to 20 November, and Bangladesh from 26 November to 2 December.  He is keeping well.

Our Kutirs in Rishikesh and Uttarkashi, which were till recently maintained by the Headquarters, have been upgraded to the status of full-fledged centres of Ramakrishna Math.  The addresses of the centres are as follows:

Swami Vagishanandaji formally inaugurated the Ramakrishna Math and Ramakrishna Mission’s celebration of Sister Nivedita’s 150th Birth Anniversary in a function held at Swamiji’s Ancestral House and Cultural Centre on 28 October.  Swami Vagishanandaji, Dr Partha Chatterjee, Education Minister, Government of West Bengal, and the General Secretary, among others, addressed the gathering.  In the same function, sixteen volumes of Veda-grantha-mala (Bengali translation of the entire Vedas, to be published in fifty-seven volumes), brought out by the Institute of Culture, Gol Park, were also released.  About 1000 people, including monks and distinguished guests, attended the function.

As a sequel to the above function, two public meetings were held at the Institute of Culture, Gol Park, on 30 and 31 October, in which several eminent scholars spoke.  The meetings were presided over by the General Secretary and Swami Divyananda.  In all, about 3500 people attended the programmes on the two days.

Our Almora ashrama held a public meeting both at Oakley House (now Nivedita Cottage) and Kakrighat on 28 October. Photos and Report.

Baghbazar centre held a public meeting on 15 October which was attended by about 800 people.  The General Secretary presided over the meeting and released the Bengali book, Bharat-chetanay Bhagini Nivedita, published by the centre.

Chennai Math held a short story-writing competition in September and October in which 550 people took part.  Prizes were distributed to the winners on 28 October.  On the same day, the Math also held a refresher course for teachers of our schools in Chennai in which 352 teachers took part.  On 29 October, a special programme comprising a cultural event by spastic children, release of a Tamil biography of Sister Nivedita, and lectures was held.  About 300 devotees attended the programme.

Darjeeling centre observed the birthday of Sister Nivedita on 28 October by holding cultural programmes.  About 120 people visited the centre that day.

Delhi centre staged, in UK and Ireland, 11 puppet shows on Swamiji from 6 to 17 October which were attended altogether by about 2000 people.  The shows were sponsored by the Ministry of Culture, Government of India, under Indo-UK Friendship Society programme, as part of Sister Nivedita’s 150th birth anniversary celebrations.  The centre also held a public meeting on its premises on 28 October which was presided over by Sri Ram Nath Kovind, President of India.  Swami Gautamanandaji also spoke on the occasion.  The meeting was attended by nearly 700 people.

Guwahati centre conducted a meeting on 28 October in which about 200 teachers and students participated. Report and Photos.

Hyderabad centre held a youths’ convention in Sathupalli town, Khammam district, on 26 October in which about 2000 women from various colleges took part.

On 29 October, Sri Raghuvar Das, Chief Minister of Jharkhand, unveiled a statue of Sister Nivedita on the campus of two schools of Jamshedpur centre named after Sister Nivedita.  The centre also conducted an essay-writing competition for the students of its various schools in which 1075 students took part.

Kankurgachhi Math held four lectures in the month of October, which were attended altogether by 960 people.

Lucknow centre conducted a public meeting on 28 October which was attended by nearly 200 people.

Madurai centre conducted a personality development camp on 14 October in which 175 students from a girls’ school in Madurai took part.

Mumbai centre held a day-long programme comprising lectures and cultural events on 28 October which was attended by nearly 300 people.

Ramharipur centre held a rally from Ramharipur to Kamarpukur on 2 October in which 127 people took part.

Ranchi Morabadi Ashrama conducted a special programme on the theme ‘Role of women farmers in enhancing family income through agriculture and allied activities’ on 11 October in which about 300 women took part. Report and Photos.

Salem Ashrama held a convention on 28 October, which was attended by nearly 200 people, mostly teachers from 16 schools.

On the initiative of Swamiji’s Ancestral House & Cultural Centre, six discourses were held in and around Kolkata between 23 September and 17 October, which were attended altogether by about 3000 people.

Tamluk Ashrama held a public meeting on 30 October which was attended by 600 people, mostly students.

Tirupati centre held a symposium on 28 October, which was attended by nearly 250 students. Report and Photos.

Vadodara centre conducted a seminar on Sister Nivedita on 28 October in which 150 people took part.

Visakhapatnam centre conducted a recitation competition from June to August in which nearly 13,000 students from 150 schools in Andhra Pradesh and Telangana participated. About 1500 prizes were given away to the winners. On 28 October, a special programme was held at the centre to felicitate teachers and volunteers who had motivated a significant number of students to participate in the competitions.

Chicago centre held, in association with the Hindu Temple of Greater Chicago, Lemont, a special programme comprising lectures and cultural programmes on 29 October.

Vedanta Society, New York, conducted an interfaith conference on 28 October which was attended by about 250 people.  Sri Sandeep Chakravorty, Consul General of India in New York, inaugurated the conference.

On 11 October, Mamata Banerjee, Chief Minister of West Bengal, laid the foundation stone for the developmental activities of Jhargram centre on the land recently allotted by the Government of West Bengal. The land is situated adjacent to our school there.  She also inaugurated on the same day a permanent exhibition titled ‘Ekatai Sampriti’ (‘unity leads to harmony’) at the school.

On 18 October, Sri Pinarayi Vijayan, Chief Minister of Kerala, presented an award, on behalf of Tiruvalla chapter of Young Men’s Christian Association (YMCA), to Tiruvalla centre recognizing the centre as a symbol of universal humanism and religious harmony.

The new building at Mayavati Ashrama, which will house the Prabuddha Bharata editorial office and a library, was inaugurated on 22 October.  Following the inauguration, a three-day spiritual retreat for monks was held, in which 31 monks from our different centres took part.

On 29 October, Swami Gautamanandaji inaugurated the new building of Delhi centre, constructed on an adjacent plot for conducting educational activities.

Allahabad centre held cultural competitions from 6 August to 3 September in which about 600 students from 25 schools and 10 colleges participated.  The prize distribution ceremony was held on 17 September.

Chennai Math conducted a medical camp at Meyyur village near Chennai on 8 October in which about 100 people were screened for asthma.

Chennai Math held a special Collagen Treatment Camp for Leprosy Cured but Deformed Persons (LCDPs) on 29 October in which 160 LCDPs were given treatment.

Hyderabad Math observed the 18th foundation day of its Vivekananda Institute of Human Excellence by holding a youth festival from 9 to 11 September.  In all, about 3200 people took part in the programmes.

Pala Math conducted a chanting competition of Sanskrit verses in September in which 150 students from 10 schools and 2 colleges took part.  The winners were awarded prizes on 30 September.

Vijayawada centre held a symposium on personality development on 17 October in which 305 students from four colleges took part. Photos and Report.

Delhi centre held 13 values education workshops from 25 September to 27 October, which were attended by 347 teachers.  The workshops were held in 5 states apart from Delhi.

Chennai Math conducted a cleanliness drive at a government-run rehabilitation centre for Leprosy Cured but Disabled Persons (LCDPs) located at Paranur, near Chengalpattu, on 2 October.  Thirty-five LCDPs and some volunteers took part in the drive.  They also dressed the wounds of 75 patients in the rehabilitation centre.

Coimbatore Mission Vidyalaya conducted two cleaning drives on 4 and 12 October in which the Vidyalaya students cleaned the premises of two government offices.

Kamarpukur centre carried out a cleanliness drive at Kamarpukur village on 29 October.

At Dhaka centre, President of Bangladesh Mr Abdul Hamid, Minister of Youth Affairs and Sports Mr Biren Sikder, Minister of Health and Family Welfare Mohammed Nasim, Minister of Road Transport and Bridges Mr Obaidul Quader and several other distinguished persons attended the Durga Puja celebration from 27 to 29 September.  In all, about one lakh people attended the celebration. Detailed Report and Photos.

The year-long silver jubilee celebration of Sarada Kindergarten of Singapore centre was inaugurated on 23 September, and was attended by about 1000 people.  A commemorative volume was released on the occasion.

On 17 October, Sri V K Singh, Minister of State for External Affairs, Government of India, inaugurated the kitchen-and-dining-hall building at a home for terminally ill patients in Inanda, South Africa.  The building was constructed by the Phoenix sub-centre in South Africa, which is in the process of becoming a full-fledged centre. Swami Adijananda (Tapan) expired at Seva Pratishthan, Kolkata, on 8 October at 2.40 pm.  He was 65 and had been suffering from interstitial lung disease and coronary artery disease for some years.  Initiated by Swami Vireshwaranandaji Maharaj, he joined the Order in 1980 at Aalo centre and had Sannyasa from Swami Bhuteshanandaji Maharaj in 1989. He served the Order at Aalo, Narendrapur, Varanasi Home of Service and Silchar centres.  Owing to his ill health he was brought to Belur Math from Silchar in November 2015, and since then he had been living a retired life at the Math.  The Swami was amiable by nature.

Swami Ekantanandaji (Paritosh Maharaj) passed away at Seva Pratishthan, Kolkata, on 17 October at about 11.30 pm owing to renal failure.  He was 83 and had been suffering from old‑age ailments for some years.  Initiated by Swami Shankaranandaji Maharaj, he joined the Order in 1956 at Saradapitha, Belur, and had Sannyasa from Swami Vireshwaranandaji Maharaj in 1966.  He served the Order at Saradapitha, Baranagar Mission Ashrama, Baghbazar Math and Rahara Boys’ Home.  After retiring from active life in 2014, he continued to stay at Rahara centre.  The Swami was simple and quiet by nature.