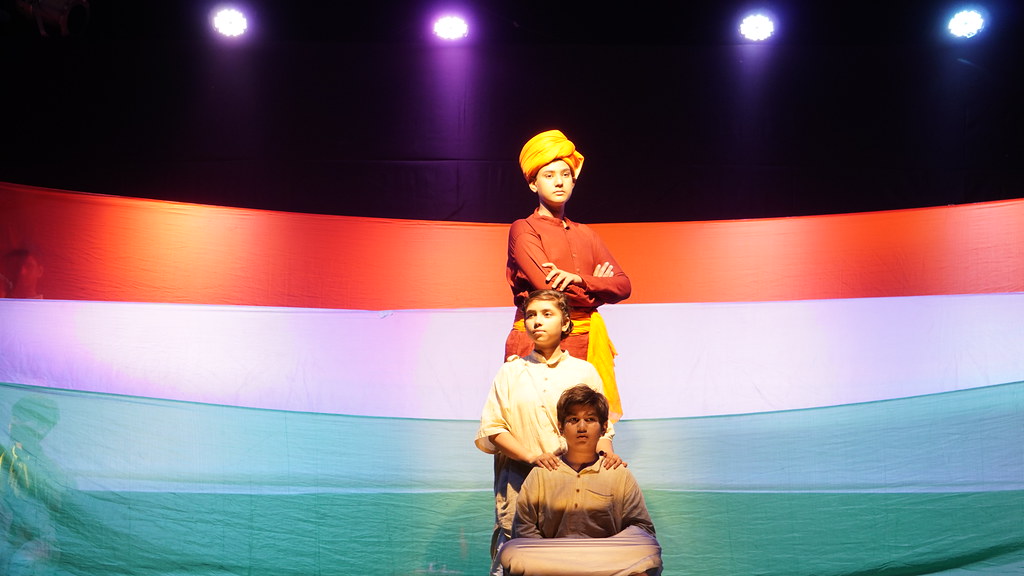 Swami Gautamananda ji will be visiting Baghbazar Math, Kolkata, from 10 to 14 October, and Belur Math from 15 to 22 October.

Swami Prabhananda ji was admitted to Seva Pratishthan on 22 September due to fever and remained there till 30 September.  He is recovering well at Belur Math.

Swami Suhitananda ji will be visiting Varanasi from 10 to 15 October, and Bardhaman and Nabadwip from 28 October to 14 November.

Swami Girishananda ji will be visiting Jamtara and Durgapur from 8 to 15 October, and Rajarhat Bishnupur from 26 to 28 October.

Krishna Nagar centre has launched a website with the address: krishnanagar.rkmm.org

Almora: A youths’ convention at Soban Singh Jeena University, Almora, on 30 August in which 550 school and college students took part.

Bhopal: A public meeting on 15 August at the centre’s school which was attended by 700 students, teachers and guests.  Prizes were distributed to the winners of the cultural competitions conducted in July and August.

Chandigarh: An essay contest and a symposium on 7 August in which 75 students took part.  The programme was attended by 175 students and devotees.

Chandipur: Cultural competitions on 19 September in which 376 students took part.  A procession and prize distribution ceremony held on the same day were attended by 525 people in all.

Coimbatore Mission: (i) Six youths’ conventions from 25 August to 17 September which were attended by a total of 564 students, and (ii) A two-day teachers’ convention on 26 & 27 August attended by 36 teachers from 9 schools.

Gurap: Public meetings on 12 and 13 August in which 81 students and 23 professors took part.  A Bengali book on freedom fighters was released and a quiz competition was held on the occasion.

Jhargram: Cultural competitions in July and August in which 347 higher secondary students from 53 schools took part.  The winners were awarded prizes in a programme held on 11 September.

Rajkot: A programme of songs and speeches in Rajkot Central Jail on 3 September in which 2000 prisoners took part.

RKMVERI (deemed university), Belur: Started an online course for school students on the Constitution of India in Bengali.

Srinagar: Cultural competitions at a public hall in Ananta Nag district on 11 September in which 80 students participated.

Swamiji’s Ancestral House, Kolkata: 28 youths’ conferences, 14 workshops, 2 parents’ conferences and a convention for sanitation workers from January to August 2022.  In all, 7444 students, teachers and parents took part in these programmes.  In the cultural competitions held on 30 and 31 August, 130 students participated.

Thrissur: Cultural competitions in which 150 students took part.  The winners were awarded prizes in a day-long function on 12 August.

Varanasi Home of Service: Cultural competitions in which 128 students and children took part, and a drama, patriotic songs and other cultural programmes on 30 July and 15 August.

Viveknagar, Agartala: A public meeting on 4 September in which Sri Manik Saha, Chief Minister of  Tripura,  Ms. Pratima Bhoumik, Minister of State of Social Justice and Empowerment, Govt. of India, and other dignitaries spoke.  About 750 persons attended the programme.

Besides the above events, ‘Prabuddha Bharat’, a drama on Swamiji’s life and teachings, and a group dance performance on the heroic tales of India’s freedom struggle, both performed by the students of our various schools, were staged by the following centres:

Gwalior: Students of the centre’s school gave two performances of the dance at the centre on 17 September.

Indore: Students of the centre’s school gave two performances of the drama at a school in Indore on 15 September.

At each venue, hundreds of people watched the performances which were assisted by the Eastern Zonal Cultural Centre (EZCC), Ministry of Culture, Government of India, Kolkata.

Chandigarh: A spiritual retreat on 11 September attended by 140 devotees.

Chennai Math: (i) A public meeting on 11 September attended by 500 people.  Smt. Tamilisai Soundararajan, Governor of Telangana & Lieutenant Governor of Puducherry, was the Chief Guest, and Swami Gautamanandaji presided over the function.  A Tamil book on Swami Vivekananda was released on the occasion, and (ii) A programme on the same day at Vivekananda Cultural Centre (on Vivekananda House campus) in which 250 people comprising mainly college students took part. Prizes were awarded to the winners of a writing competition in which more than 5000 students from 26 institutions had participated.

Hyderabad: A public meeting and a musical discourse on Swamiji on 11 September, attended by 750 people in all.

Jammu: A youths’ convention on 19 September attended by 200 school and college students.

Kochi: A programme on 15 September in which 100 students took part.

Lucknow: A spiritual retreat and an inter-religious conference on 11 September.

Muzaffarpur: A teachers’ convention on 11 September attended by 60 teachers, headmasters and principals.  The District Magistrate of Muzaffarpur and others addressed the gathering.

Nabadwip: A special meeting of the study circle on 11 September, attended by 35 youths and others.

Naora: A public meeting on 11 September.

Narottam Nagar: A function on 11 September with speeches, recitations, painting and a quiz by students.

Purulia: A students’ convention on 13 September.

Rajkot: A youths’ convention on ‘Swami Vivekananda and Modern Youth’ on 11 September which was attended by 550 youths.

Thanjavur: (i) A series of special lectures at 7 colleges and universities in Thanjavur, Trichy, Perambalur and Kumbakonam from 10 to 14 September which were attended by 4500 students in all, and (ii) An hour-long interaction programme on All India Radio, Trichy.

Sri Manik Saha, Chief Minister of Tripura, and Ms. Pratima Bhoumik, Union Minister of State for Social Justice and Empowerment, visited Viveknagar centre, Agartala, on 4 September.  The next day, a teachers’ enclave on the centre’s main campus and a building with a books showroom and a computer centre at its Gangail Road sub-centre were inaugurated.

Hyderabad Math observed the 23rd foundation day of its Institute of Human Excellence by holding a youths’ convention on 13 September.  Smt. Tamilisai Soundararajan, Governor of Telangana & Lieutenant Governor of Puducherry, addressed a gathering of 2200 youths and devotees.

Delhi centre has developed a five-year graded values education course called ‘Awakening’ for primary school (classes 1 to 5) students. The programme was formally launched by Sri Dharmendra Pradhan, Union Minister for Education, and Skill Development & Entrepreneurship, in a function held at the centre on 15 September.  It may be noted in this connection that the ‘Awakened Citizen Programme’ which the centre has been running since 2014 is for students studying in classes 6 to 9.

Deoghar Vidyapith held the inaugural function of its centenary from 22 to 24 September.  The General Secretary inaugurated the celebration.  A public meeting, a seminar on ‘Empowering the Youth – the Vivekananda Way’, an educational exhibition, cultural performances, a football match, a quiz show and a drill display formed part of the three-day function.  Several dignitaries, monks, students and their parents and alumni of the Vidyapith attended the programme.

The newly built prayer hall and classrooms at the nursery and primary school of Villupuram centre were dedicated on 25 September.

The new bookstall at Vrindaban centre was opened on 28 September.

The under-17 football team of Aalo school won the state-level Subroto Cup Football Championship.  The team will now participate in the inter-state championship next year.

A photo exhibition on ITI and a kitchen were opened at Viveknagar centre, Agartala, on 25 and 27 September respectively.  Also, a security kiosk and a personnel enclave were inaugurated at Gangail Road sub-centre on 25 September.

The UNESCO has renewed its Chair in Inclusive Adapted Physical Education and Yoga at RKMVERI deemed university’s faculty centre at Coimbatore Mission for four years, until 2025.

Almora: (i) A personality development seminar on 31 August in association with a medical institute at Almora in which 100 MBBS students and doctors took part, and (ii) A motivational lecture at the ashrama on 31 August attended by 70 school teachers and others.

Chennai Math held a values education programme at its Vivekananda Cultural Centre on 21 September which was attended by 50 engineering college students.

Delhi centre distributed 200 LED projectors-cum-laptops to the government schools for girls in Rajasthan on 10 August. The centre also conducted 21 workshops on values education in offline mode and 2 in online mode, from 27 August to 24 September.  In all, 1299 school principals and teachers from different parts of India participated in these workshops.

Kanpur: A spiritual retreat on 4 September for IIT Kanpur students in which 25 students took part.

Koyilandy centre held a teachers’ convention on 18 September in which 35 teachers took part.

Rajkot centre conducted (i) eight values education seminars from 2 to 21 September which were attended by a total of 1440 students, and (ii) lectures in three schools in Wankaner in Morbi district on 8 September attended by 1053 students in all.

Salem Ashrama conducted values education programmes at five colleges in Salem district from 6 and 23 September in which a total of 1270 students participated.

Thrissur Math held cultural competitions for secondary, higher secondary and college students in which 1000 students from all over Kerala took part.  The winners were awarded prizes on 12 August.

Bankura: A total of 476 eye patients were screened, 96 were operated on and 58 were given spectacles in September.

Baranagar Mission: Eye camps on 18 & 25 September in which a total of 143 patients were checked and 64 were given spectacles.

Coimbatore Mission: Nine medical camps (in general, eye, cancer, orthopaedic, dental and ENT categories) in rural and tribal areas of Coimbatore district from 21 August to 18 September in which a total of 511 patients were treated.

Delhi: Eye operations on 15 patients and distribution of spectacles to 3 patients in August.

Gurap: An eye camp on 22 August in which 43 patients were checked; 5 of them were subsequently operated on at an eye hospital in Shibpur, Howrah, on 27 August.

Jalpaiguri: An eye camp in Siliguri on 18 September: 168 patients were treated, and spectacles were given.

Kamarpukur: 1261 eye patients were checked, 239 were operated on and 162 were given spectacles from 30 July to 25 September.

Kanpur: A medical camp at Chheriya village of Unnao district on 11 September in which 225 patients were treated.

Lucknow: 9252 eye patients were checked and 218 were operated on and given spectacles in August.

Madurai: An eye camp on 18 September – 218 patients were screened, 58 underwent cataract surgery and 18 were given spectacles.

Manasadwip: (i) Conducted an eye camp on 18 & 24 September in which 211 patients were treated, and (ii) Arranged cataract surgery for 38 patients on 23 September in association with another institution.

Nagpur: An eye camp on 11 September in which 191 patients were checked; subsequently, 74 were operated on for cataract and a total of 140 spectacles were distributed.

Porbandar: An eye camp on 9 September: 54 patients were treated and subsequently 21 were operated on for cataract.

Salem: (i) Three eye camps on 28 August and 4 September in which a total of 378 patients were checked; subsequently, 108 were operated on and 72 were given spectacles. (ii) A medical camp on 18 September attended by 324 patients.

Somsar: A general health camp on 24 September in which 205 patients were treated.

Vadodara: Several eye camps from 1 August to 23 September in which a total of 1247 patients were treated; 180 of them were operated on for cataract at a hospital.

Swami Nishchalananda (Ranendra) passed away at IPGMER-SSKM Hospital in Kolkata, on 16 September at 10.50 am.  He was 79 and had been suffering from Alzheimer’s disease and other old-age ailments.  Initiated by Swami Vireshwaranandaji Maharaj, he joined the order in 1973 at Narendrapur centre and received sannyasa diksha from his guru in 1984. He served the order at Belur Math and Narendrapur, Advaita Ashrama (Kolkata & Mayavati), Shillong and Baghbazar centres.  He was an Acharya at the Probationers’ Training Centre and also worked on revising the Complete Works of Swami Vivekananda.  The swami was kind-hearted, well-read and keenly interested in classical music and learning different languages. Swami Premapurnananda (Bhajan), aged 59 years, expired suddenly and unexpectedly on 29 September at 7.30 am owing to bronchial asthma at Puri Math where he had gone a day before on a pilgrimage.  Initiated by Swami Vireshwaranandaji Maharaj, he joined the order in 1982 at Belur Math and received sannyasa diksha from Swami Bhuteshanandaji Maharaj in 1991.  He served the order at Belur Math (at Swami Vivekananda Temple and in the construction department of Headquarters) and at Mumbai, Vrindaban, Guwahati, Saradapitha, Hyderabad,  Jayrambati, Prayagraj, Lucknow, Coimbatore Mission, Jamtara, Baranagar Mission, Sargachhi, Barisha, Seva Pratishthan, Chandipur, Ranchi Morabadi and Kamarpukur centres.  The swami was sociable and energetic.