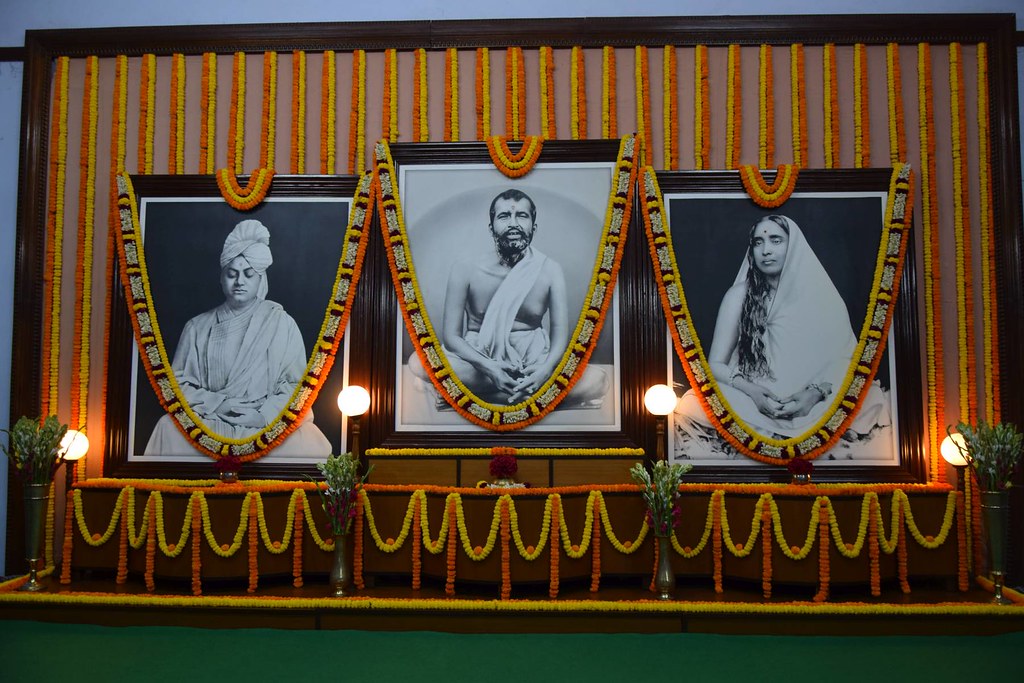 Revered President Maharaj is at Narendrapur Ashrama and will return to Belur Math on 10 June. He is in good health.

Swami Vagishananda ji will be visiting Konaban, Kailashahar and Agartala (all of them in Tripura) from 15 to 30 June. He is keeping well.

Swami Gautamananda ji is scheduled to visit Villupuram (in Tamil Nadu) from 1 to 3 June, Ramanathapuram from 5 to 7 June, and Bengaluru and Tumakuru from 14 to 23 June. He is in good health.

Swami Prabhananda ji will visit the Institute of Culture, Gol Park, from 18 to 29 June. He is keeping well.

Swami Shivamayananda ji is scheduled to return to Kankurgachhi on 4 June after his visit to Dehradun and Kankhal. Subsequently, he will be visiting Jorhat and Golaghat (both in Assam) from 14 to 23 June and Jabalpur from 29 June to 4 July. He is keeping well.

Swami Suhitananda ji will visit Dibrugarh, Tinsukia and Narottam Nagar from 4 to 19 June, and Guwahati from 28 June to 5 July. He is in good health. 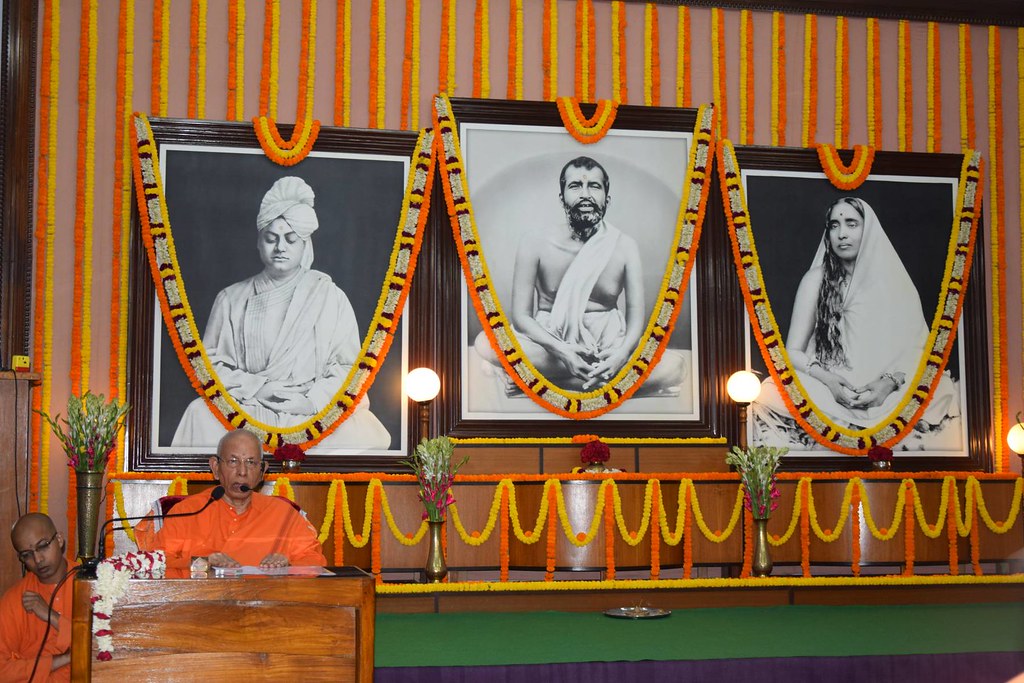 The 123rd Foundation Day of the Ramakrishna Mission was celebrated at Belur Math on 1 May.  Revered President Maharaj chaired the programme.  A good number of monks, devotees and well‑wishers were present in the programme.

Phone Numbers: Agartala centre has discontinued its telephone connections 2374222 and 2370333.

Commemoration of the 125th Anniversary of Swami Vivekananda’s Addresses

Antpur: A seminar on 19 May in which 200 people participated.

Asansol: Four youth conferences at nearby places, namely Chittaranjan, Chelod, Jamuria and Raniganj, in May in which 477 youths took part.

Jalpaiguri: (i) A parents’ convention at a public auditorium in Jalpaiguri on 4 May which was attended by 430 people.

(ii) A devotees’ convention in Siliguri on 5 May in which Swami Suhitananda ji and a few others spoke; about 1350 devotees took part in the convention.

Mangaluru: Lecture programmes in 3 colleges in May which were attended by 850 youths in all.

Rajkot: A public meeting on 13 May which was presided over by Swami Shivamayanandaji and attended by about 400 people.

Malaysia: A programme with speeches and music at a public hall in Kuala Lumpur on 1 May which was attended by 300 devotees.

St. Louis, USA: A special programme on 19 May consisting of talks by a few scholars, an audio‑visual presentation and singing of bhajans.  A commemorative volume was also released on the occasion.  The programme was attended by nearly 250 people and was held at the Hindu Temple of St. Louis.

Revered President Maharaj installed new pictures of Holy Mother Sarada Devi and Swami Vivekananda in Sri Ramakrishna temple at Bamunmura centre on 7 May, the auspicious Akshaya Tritiya.  The programme was attended by 130 monks and about 500 devotees.

Swami Gautamanandaji reconsecrated the renovated Sri Ramakrishna temple at the Nettayam sub‑centre of Thiruvananthapuram Ashrama on 7 May.  A procession, public meetings and cultural programmes were held in this connection from 6 to 8 May.

Vivekananda College of Chennai Vidyapith has earned the distinction of having its autonomous status extended by the UGC for ten years (from 2019-20 to 2028-29).  As per the UGC norms, only those institutions which have secured 3.51 or more grade points (out of 4) in their NAAC assessment are eligible to get the extension for ten years.  Vivekananda College had scored 3.56 grade points in its third cycle of NAAC assessment in 2017.

A third-year B.Com. student of Chennai Vidyapith has secured the 8th rank in the all-India Intermediate Examination conducted by the Institute of Cost Accountants of India.  He was awarded a certificate and a silver medal at a function held in Kolkata on 15 May.

Four Sanskrit students of RKMVERI (deemed university), Belur, won prizes in the national-level Bhagavad Gita memorization contest held in Sringeri by Dakshinamnaya Sri Sharada Peetham on 19 May.  Each of them received a cash prize of rupees 21,000 and a certificate of merit.

The NCC unit of Mysuru Vidyashala received the Best Institution Award (Junior Division ‒ Boys) for the year 2018-19 from the NCC Directorate ‒ Karnataka & Goa.  A rolling trophy and a citation were handed over to the unit at a function held in Bengaluru on 3 February.

Narendrapur Vidyalaya won the Best School Award in an inter-school mathematics contest held by Mayurakshi, a private company based in Kolkata.  A trophy and a cash award of rupees 1.50 lakh were handed over to the school on 20 April.  The school also stood first in the state-level mathematics fair conducted on 27 April by Bidhannagar Municipal School, Kolkata, in collaboration with the Calcutta Mathematical Society.

Summer Camp : Mysuru: GAP   Mysuru  Indore  Kochi
Results obtained by the students of our schools at the Secondary and Higher Secondary Exams. REPORT

Aalo centre conducted an anti-tobacco and health awareness programme in a nearby village on 22 May which was attended by 50 people.

Koyilandy centre held a medical camp on 21 May in which doctors checked 60 children from a fishermen colony and gave medicines. Photos and Report

Salem Ashrama conducted discourses and bhajans at the Central Prison in Salem on 28 April which were attended by about 500 inmates of the prison.

Vijayawada centre, in association with Madras Dyslexia Association, held a training programme from 6 to 11 May in which 62 teachers received training in imparting education to children affected by dyslexia (a disorder that involves difficulty in learning to read or interpret words, letters and other symbols).

Kamarpukur centre conducted a cleanliness drive at Kamarpukur village on 26 May.

Mangaluru Ashrama conducted the following activities in May: (i) four cleanliness drives in Mangaluru involving 1950 volunteers, (ii) awareness campaigns for 24 days in which volunteers reached out to 1450 households in different parts of Mangaluru city, spreading awareness about waste management, and (iii) cleanliness drives in 100 villages of Dakshina Kannada and Udupi districts.

Agartala centre held a state-level residential youth camp from 26 to 28 April in which 241 youths participated.

Delhi centre conducted 24 values education workshops in 10 states and 2 union territories between 29 April and 25 May which were attended by a total of 1655 teachers and 182 principals.

Salem Ashrama conducted a values education programme at a college in Mecheri, Salem district, on 2 and 3 April in which 180 students participated.

Lusaka centre, Zambia, held a blood donation camp on 1 May in which 42 people donated blood.