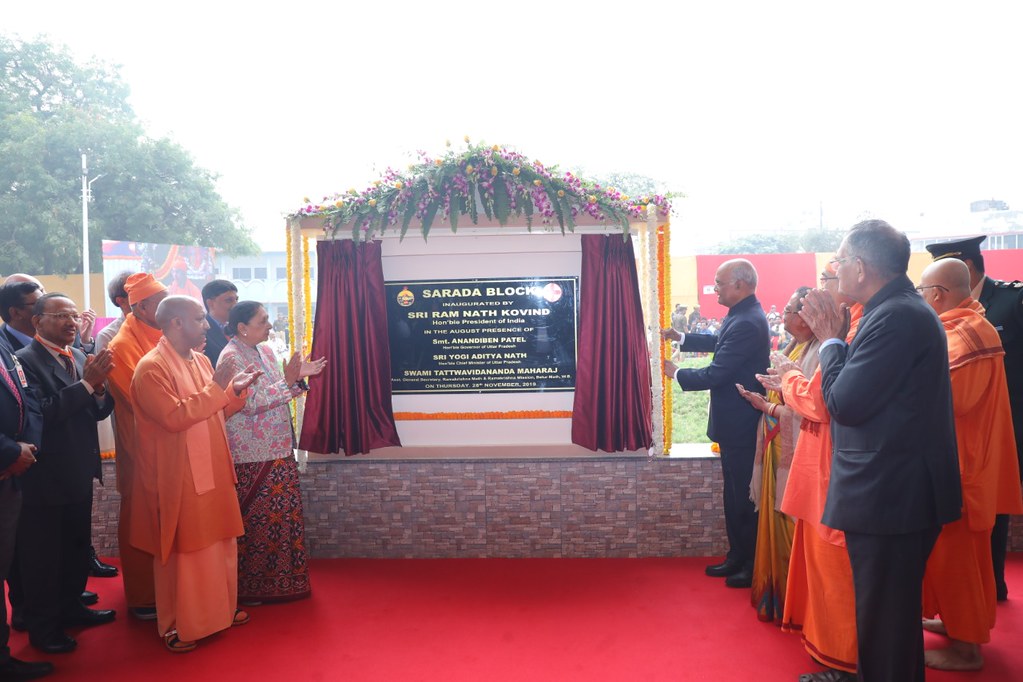 Revered President Maharaj will be visiting Jhargram and Medinipur from 6 to 14 December.

Swami Vagishananda ji will remain in Cossipore Math throughout December.

Swami Gautamananda ji, presently visiting South Africa, is scheduled to return to Chennai Math on 8 December. He will be visiting Gadag in Karnataka from 12 to 16 December, Delhi on 19 December, Coimbatore, Madurai and Konampatti in Tamil Nadu from 20 to 26 December, and Belur Math from 27 to 30 December.

Swami Prabhananda ji will be visiting Barisha from 1 to 8 December, and the Institute of Culture, Kolkata, from 20 to 27 December.

Swami Shivamayananda ji is scheduled to return from Coimbatore to Kankurgachhi Math on 4 December. He will be visiting Guwahati and Kharupetia from 8 to 13 December, and Malda and Buniadpur on 27 December.

Swami Suhitananda ji will be returning to Belur Math on 13 December after his tour of Fiji, New Zealand, Australia and Singapore.

Gandhi Smarak Sangrahalaya, Barrackpore, presented the Mahatma Gandhi Memorial Award to Sargachhi centre on 2 October, Gandhi Jayanti, in recognition of its service activities. The award consisted of a certificate, a memento and a sum of ten thousand rupees.

The year-long centenary celebrations of Bhubaneswar Ashrama began with a two-day programme on 31 October and 1 November. Swami Gautamanandaji inaugurated the celebrations. Sri Dharmendra Pradhan, Union Minister for Petroleum & Natural Gas and Steel, Smt Aparajita Sarangi, Member of Parliament, the General Secretary and about 500 monks, devotees and admirers attended the programme.

Swami Gautamanandaji dedicated two new exhibits in the Vivekananda Exhibition of Delhi centre on 12 November. The new exhibits are based on virtual reality and augmented reality technologies. Photos and Report

Swami Shivamayanandaji and the Governor of Meghalaya Sri Tathagata Roy inaugurated an ultrasound machine in the dispensary of Shillong centre on 13 November.

Sri Ram Nath Kovind, President of India, inaugurated the Sarada Block of  Vrindaban hospital on 28 November in an impressive function which was also attended by the Governor of Uttar Pradesh Smt Anandiben Patel and the Chief Minister of Uttar Pradesh Sri Yogi Adityanath apart from a few ministers and other dignitaries. Built as per NABH (National Accreditation Board for Hospitals & Healthcare Providers) standards, the new state-of-the-art block houses MRI and CT scan facilities, two modular operation theatres, a cancer ward, and a number of other departments and facilities. Photos and Report

Aalo centre held a medical camp at Humoli, a remote village near Aalo, on 26 November in which 60 patients were treated.

Asansol centre conducted a blood donation camp on 22 November in which 101 students of the centre’s ITI donated blood.

Bajepratappur centre, Bardhaman, held two camps at its rural development unit in Aeorah, Bhatar Block, on 2 October: (i) a medical camp in which 850 patients were treated, and (ii) a blood donation camp in which 84 people donated blood.

Guwahati centre conducted a medical camp at Makaria village in Morigaon district of Assam on 14 November in which 384 patients were treated. Photos and Report

The off-campus centre of RKMVERI (deemed university) in Coimbatore Mission Vidyalaya held the 14th convocation on 9 November. In all, 202 successful candidates were awarded certificates and degrees. Dr Sunil Kumar Barnwal, Principal Secretary to the Chief Minister of Jharkhand, delivered the convocation address. Photos and Report

Delhi centre conducted 13 values education workshops in Ajmer, Delhi, Hyderabad, Kolkata and Pune from 20 to 26 November. A total of 126 principals and 686 teachers attended the workshops.

Haripad Math held values education camps at three schools in Alappuzha district on 11, 14 and 15 November which were attended by 553 students in all.

Kanpur centre conducted a youths’ convention on 17 November in which 240 youths from different educational institutions participated. Photos and Report

Koyilandy centre held a youths’ convention on 16 November in which 70 students took part. Photos and Report

Rajkot Ashrama conducted 9 values education programmes from 18 to 22 November in which 682 students from 5 schools participated.

Vadodara centre held values education programmes at 11 schools in Chota Udepur, Panchmahal and Vadodara districts of Gujarat from 31 October to 28 November. In all, 3755 students participated in these programmes.

Commemoration of the 125th Anniversary of Swami Vivekananda's Chicago Addresses

Bamunmura: A devotees’ convention on 24 November attended by 365 devotees. Photos and Report

Kochi: A students’ convention on 18 November in which nearly 150 students from different higher secondary schools participated.

Mumbai: A day-long programme at an auditorium in Mumbai on 23 November. Justice Pinaki Chandra Ghose, Lokpal of India, inaugurated the programme. The General Secretary and a few others addressed the gathering of about 900 people, comprising mainly college students.

Lusaka, Zambia:  A public meeting on 24 November in which Swami Gautamanandaji and others addressed a gathering of 83 people. Photos and Report

Swami Vitamohanandaji (Krishna Maharaj), head of Gretz centre, France, passed away suddenly on 7 November at 12.08 pm local time (4.38 pm Indian Standard Time) due to a massive heart attack at a medical clinic in Paris where he had gone for his dental treatment. He was 77. An initiated disciple of Swami Yatishwaranandaji Maharaj, he joined the order in 1961 at Chennai Math and received sannyasa diksha from Swami Vireshwaranandaji Maharaj in 1971. He served at Chennai Math, Kalady and Mysuru centres as an assistant till November 1986 and then Ponnampet centre as the head for three years. In May 1990, he was sent to Gretz centre in France as an Assistant Minister and was appointed head of that centre in February 1994 after the passing away of Swami Ritajanandaji whom he had been assisting there. Known for his calm demeanour, he was loved and respected by all for his simplicity, gentle manners and sweet nature.

Swami Varanandaji (Govinda Maharaj) breathed his last on 14 November at 7.20 am at Seva Pratishthan, Kolkata, due to advanced oral cancer. He was 78. Initiated by Swami Vireshwaranandaji Maharaj, he joined the order in 1965 at Shillong centre and received sannyasa diksha from his guru in 1974. He served the order at the Math Office in Belur Math and at Shillong and Saradapitha centres as an assistant. He was a sevak of Swami Vireshwaranandaji Maharaj for a few years. Later as the head of Antpur centre he worked tirelessly for its expansion. For the last six years he had been living a retired life at Belur Math. Austere and kind-hearted by nature, he was endowed with great tenacity and zeal.

Swami Kapilananda (Manojit) expired on 25 November at 8.30 am at Varanasi Home of Service. He was 45 and had been suffering from liver cancer for the last 8 years. Initiated by Swami Aksharanandaji Maharaj, he joined the order in 2006 at Dhaka centre and received sannyasa diksha from Swami Atmasthanandaji Maharaj in 2017. He served the order at Dhaka, Chittagong and Delhi centres. For the last one and a half months he had been staying at Varanasi Home of Service. He was simple and austere by nature and he maintained his composure even in the face of the inevitable.