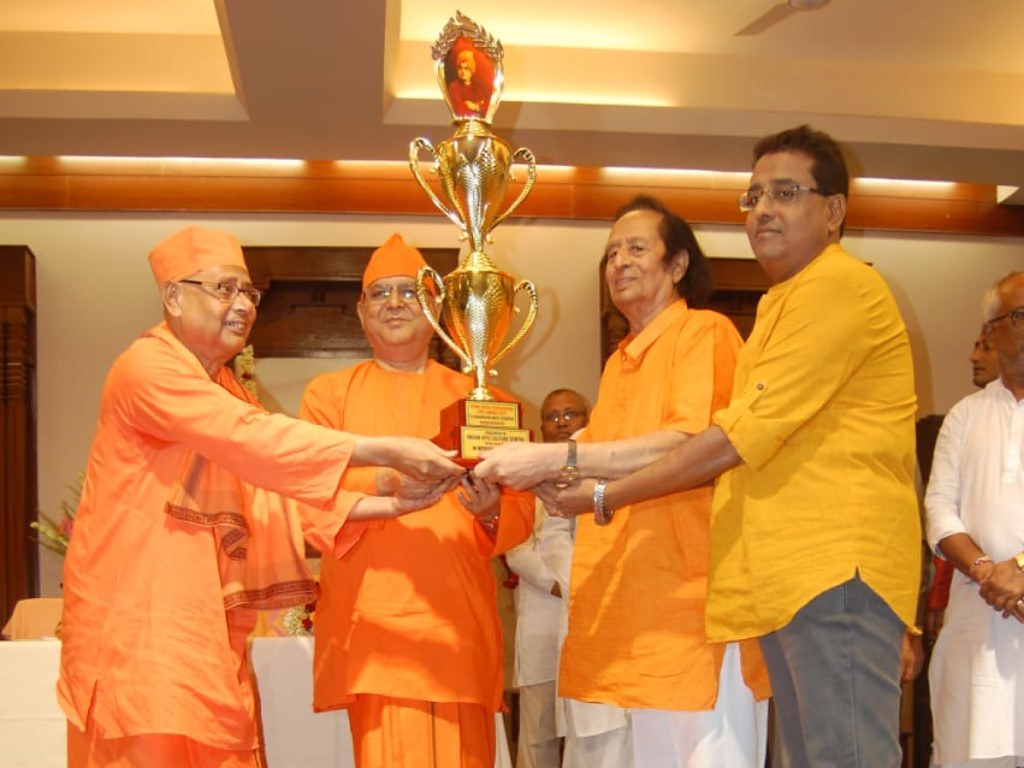 Revered President Maharaj will be visiting Rahara centre from 13 to 21 September.

Swami Vagishananda ji is scheduled to return to Cossipore Math on 8 September after his visit to Kamarpukur and Jayrambati. He will visit Ranchi from 20 to 24 September.

Swami Gautamananda ji will be visiting Raipur, Narainpur and Bilaspur from 2 to 12 September, Hyderabad from 13 to 15 September, Belur Math and the Institute of Culture, Gol Park, from 16 to 20 September, and Mysuru, Ponnampet and Mangaluru from 23 September to 3 October.

Swami Prabhananda ji is scheduled to visit Port Blair from 17 to 24 September.

Swami Shivamayananda ji will visit Durgapur from 1 to 6 September, Baranagar on 21 and 22 September, and Kamarpukur and Beldiha in Hooghly from 27 September to 1 October.

Swami Suhitananda ji will be visiting Medinipur from 2 to 4 September, and Silchar, Hailakandi and Karimganj from 10 to 27 September.

A procession and a public meeting were held at Shyamsayer Ashrama, Bardhaman (a sub-centre directly under the supervision of the headquarters) on 24 August to mark the taking over of Burdwan Sree Ramakrishna Ashram and starting of a sub-centre of the Ramakrishna Mission there. The General Secretary presided over the meeting. The address and other details of the centre have already been announced in the October 2018 Bulletin. Photos and Report

Ramakrishna Vivekananda Ashram, Kasundia, Howrah, was taken over by the Ramakrishna Mission on 10 August, and a new branch of the Mission has been functioning there since then. The address of the centre is :

Piñon Hills Retreat, where Hollywood Vedanta Society, USA, has been conducting some activities for the last few years, has now been made an official sub-centre of the Society. Its address is :

The following centres have changed their website addresses. The new addresses are given below:

Advaita Ashrama, Kolkata: A youths’ convention on 25 August in which 90 students took part. Photos and Report

Baranagar Math: Two talks on 24 and 26 August which were attended by 153 students and teachers.

Coimbatore Mission: Cultural competitions at 10 schools and colleges in and around Coimbatore from 24 July to 20 August. In all, 1222 students took part in the competitions. At all the venues, the competitions were followed by a talk, an awards ceremony and a skit.
Photos and Report

Cooch Behar: A youths’ convention and a devotees’ convention on 27 July which were attended by 400 people in all.

Hyderabad: Programmes in 54 schools between 25 June and 26 August in which about 19,000 students took part. In each school, talks, recitations and cultural competitions were held.

Mangaluru: (i) A seminar on 10 August attended by 630 delegates. (ii) Lecture programmes in 8 colleges in the month of August which were attended by 3340 youths in all.

Nattarampalli: Students’ conventions at two rural schools on 9 and 16 August which were attended by 1100 students, and brief talks at 22 schools in different villages from 16 to 22 August reaching out to about 1000 students. Photos and Report

Pune: A seminar on 11 August in which 425 people took part, and a musical play in Thane on 18 August on the life and teachings of Swamiji which was attended by about 1200 people.

Rajkot: A convention on 4 August in which 700 people participated. Photos and Report

Taki: Seminars at two high schools in North 24 Parganas district on 9 and 22 August in which a total of 356 students took part.

Bagerhat, Bangladesh: A devotees’ convention and a cultural programme on 20 August attended by 600 devotees.

Lusaka, Zambia: A special talk on 9 August attended by 85 people.

Mymensingh, Bangladesh: Two programmes on 28 August – A devotees’ convention attended by 700 devotees, and cultural competitions in which 250 students took part. Photos and Report

As part of its centenary celebrations, Salem Ashrama held the following programmes: (i) Vivekananda Ratha (carriage) visited 159 educational institutions and other public places in Salem, Dharmapuri and Krishnagiri districts from 14 July to 5 August. (ii) Cultural competitions were conducted from 25 July to 2 August in which 1579 students from 29 schools in and around Salem took part. Winners were awarded prizes on 18 August. (iii) Meetings were called at a government hospital in Salem on 17 and 18 August in which 470 housekeeping staff of the hospital participated. (iv) A women’s convention was held at a public hall in Salem on 22 August; it was attended by about 800 paramedical students and devotees.

RKMVERI (deemed university) inaugurated on its Belur campus a three-year degree course on Indian Heritage and Philosophy on 30 July, the sacred birthday of Swami Ramakrishnanandaji Maharaj. The course is especially meant for those young men who are desirous of joining our order but lack necessary academic qualification.

The new library attached to the Sanskrit college of Pala centre was inaugurated on 5 August.

The Indian Epic Culture Centre, Kolkata, presented Viswanayak Vivekananda Award to Kankurgachhi Math on 18 August. On behalf of the Math, the General Secretary received the award comprising a trophy, a citation and ten thousand and one rupees. Photos and Report

The General Secretary inaugurated the new guest-house at Ramharipur centre on 29 August.

The under-14 and under-17 football teams of Narainpur school won the state-level Subroto Cup Football Tournament held at Janjgir-Champa in Chhattisgarh from 28 to 31 July. The school also won the overall champions trophy.

A student of RKMVERI’s faculty of General & Adapted Physical Education and Yoga (GAPEY) on Coimbatore Mission campus was part of the under-19 Indian kabaddi team which won the Indo Nepal Championship held in Nepal on 22 and 23 July. Another student of the same faculty participated in a karate championship held in Coimbatore on 10 and 11 August and secured the first place in the above-18 category.

Aalo centre conducted a medical camp at Kombo Tarsu, a remote village located at a distance of 30 km from Aalo, on 12 August in which 80 patients were treated.

Medinipur Ashrama conducted a medical camp at Monidaha, under Medinipur Sadar block, a backward tribal area in Paschim Medinipur district, on 15 August in which 744 patients were treated.

Rahara Boys’ Home held two multidisciplinary medical camps in Nadia and South 24 Parganas districts on 28 July and 4 August in which a total of 1302 patients received treatment. Further, following the outbreak of dengue in West Bengal, the centre also set up four fever clinics in Habra in North 24 Parganas district from 7 to 16 August in which 204 patients were treated.

Chandigarh Ashrama held two special talks in an educational institution and on the centre’s campus on 8 August which were attended by a total of about 650 students. Photos and Report

Delhi centre conducted 42 values education workshops in 19 towns and cities all over India between 27 July and 27 August which were attended by a total of 2708 teachers and 137 principals.

Vadodara centre held 2 values education programmes on its campus and another 4 programmes at 4 schools in two districts in August. In all, 2939 students participated in these programmes.

Mangaluru Ashrama conducted the following activities in August: (i) four cleanliness drives in Mangaluru involving 1675 volunteers, (ii) awareness campaigns for 24 days in which volunteers reached out to 1480 households in different parts of Mangaluru city, spreading awareness about waste management, (iii) cleanliness drives in 152 villages of Dakshina Kannada and Udupi districts, (iv) magic shows on the cleanliness theme in 34 schools in Udupi district, (v) observance of Cleanliness Day in 130 schools in which about 13,000 children participated, and (vi) a seminar on Clean India on 9 August attended by 650 youths.

Lusaka centre, Zambia, held a medical camp at a slum in Lusaka on 3 August in which 100 patients were given free medicines.