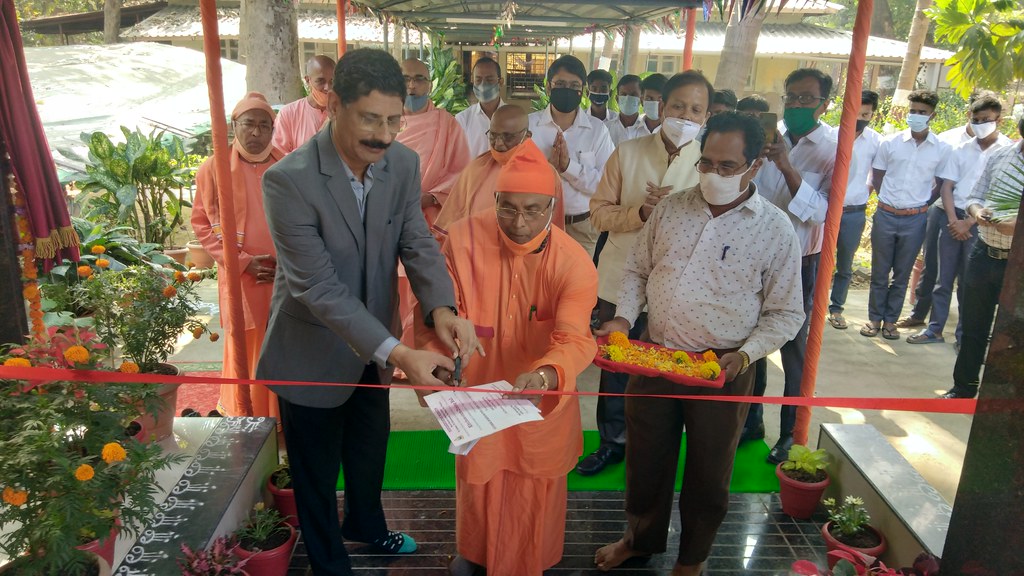 Shri Rajnish Mehta, Chairman, MAFFFL inaugurated the dining hall building in the presence of other dignitaries from MAFFFL, Monks of Ramakrishna Mission, Staff and Students of Sakwar.

Rev Swami Suvirananda ji , General Secretary, Ramakrishna Math and Ramakrishna Mission, Belur Math had sent his video message.  Below is the excerpt of his message.

The Rural Health & Welfare Centre at Sakwar village of Palghar district was started in 1972 and has been rendering its philanthropic service for more than 48 years. It hosts a modernized dispensary and a residential vocational training centre on the campus. An average of 300 patients visit the dispensary everyday. The attendance is much more on Sundays. All of them are offered food there itself. So, including students and patients, a well-equipped kitchen-diner with the capacity to feed nearly 500 people daily was a dire necessity. However, the existing infrastructure was not adequate. Moreover the kitchen building had become old & unhygienic and needed urgent renovation. In view of this, a complete demolition of the old structure and constructing a new building was recommended by experts.

Right at this crucial time, Mumbai Aviation Fuel Farm Facility Pvt. Ltd. (MAFFFL) extended their support by funding the much-needed project to the tune of Rs. 1.30 crore under their CSR scheme.

Swami Vivekananda proclaimed, “This is the gist of all worship — to be pure and to do good to others. He who sees Shiva in the poor, in the weak, and in the diseased, really worships Shiva; and if he sees Shiva only in the image, his worship is but preliminary.”

The practical implementation of the motto of Ramakrishna Mission “आत्मनो मोक्षार्थं जगद्धिताय च” (Atmano Mokshartham Jagaddhitaya Cha), meaning “for one’s own liberation and for the welfare of the world” is embodied in an aphoristic principle given by his Master Sri Ramakrishna: “शिव ज्ञाने जीव सेवा” (Shiva Jnane Jiva Seva), that is, “service to man is service to God”. This is the guiding philosophy for all the philanthropic activities of the Ramakrishna Mission. Translated into secular parlance, this means that each human being has the potential for the highest excellence and service consists in trying to remove the obstacles to the realization and manifestation of this potential.

Among the services offered by Ramakrishna Mission, education and medical services are of paramount importance. Swamiji said, “The education which does not help the common mass of people to equip themselves for the struggle for life, which does not bring out strength of character, a spirit of philanthropy, and the courage of a lion — is it worth the name? Real education is that which enables one to stand on one’s own legs.” Swamiji was keen on vocational scheme of education. He said, “We need technical education and all else that may develop industries so that men, instead of seeking for service, may earn enough to provide for themselves, and save something against a rainy day.” This would simultaneously add to the industrial growth for the progress of the nation. The residential Vocational Training Centre at Sakwar plays an important role in this direction.

The modernized Charitable Dispensary of the Sakwar centre is also much in demand to the local people. Charity, in the true sense, is not merely giving. The recipient of a charitable deed is not inferior to the giver. Charity has to be done with humility, otherwise it is not service. The central message of Vedanta is that of oneness and divinity. The idea of charity is deeply ingrained in Indian spiritual thinking – service of the poor is akin to worshiping the God. From time immemorial, the intrinsic ideals of our motherland are renunciation and service. Swamiji gave it a new dimension – “if you want to find God, serve man.” And he elucidated, “We are the servants of that God who by the ignorant is called Man”.

Commemoration of the 150th Birth Anniversary of Sister Nivedita, Mumbai