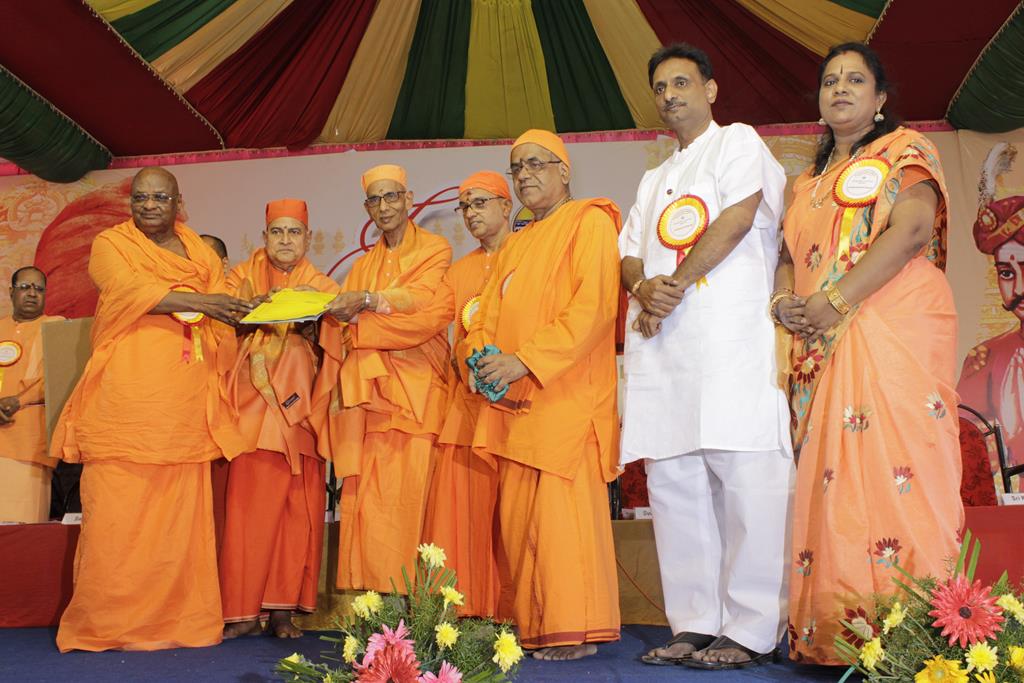 Revered President Maharaj continues to be at Seva Pratishthan.  There is no significant change in his health condition.

Narendrapur. He will be visiting Bengaluru from 20 to 29 July. He is keeping well.

Swami Vagishanandaji is scheduled to visit Krishnanagar (Nadia) from 12 to 15 July, and Silchar, Hailakandi and Karimganj from 25 July to 8 August.  Now at Cossipore Math, he is in good health.

Swami Prabhanandaji will be visiting Lucknow centre from 14 to 17 July and Kankurgachhi Math from 25 to 30 July. He is keeping well.

Swami Suhitanandaji, General Secretary, visited Chennai, Kozhikode and Koyilandy from 2 to 6 June, Delhi on 17 June, and Chennai, Madurai, Ramanathapuram and Chengalpattu from 25 to 29 June.

Swami Balabhadrananda visited Purulia from 19 to 21 June, and Thiruvananthapuram, Kayamkulam and Ramanathapuram from 25 to 29 June.

Swami Bodhasarananda visited Delhi, Kankhal, Dehradun and Uttarkashi from 16 to 20 June, and Varanasi on 25 and 26 June.

Chandigarh centre held a special lecture programme on 12 June which was attended by about 150 devotees.

Rajamahendravaram (Rajahmundry) centre conducted a youth convention on 11 June in which about 700 students took part. Click here for details and photos.

Swamiji’s Ancestral House and Cultural Centre held four lectures at the centre from 23 May to 17 June which were attended altogether by 1200 people.    On the centre’s initiative, four public meetings were held in and around Kolkata from 2 May to 4 June.  In all, about 1250 people attended the programmes.

Swami Suhitanandaji formally inaugurated the new Math centre at  Ramanathapuram on 26 June in the presence of Swami Gautamanandaji and a number of other monks and devotees.

As a part of its yearlong centenary celebration, Chandipur Math conducted cultural programmes on 17 & 19 April and 8 May.  Also, a doctors’ conference was held on 14 June in which 155 doctors took part.

Cherrapunjee centre organized International Yoga Day in 11 districts of Meghalaya in collaboration with the Ministry of AYUSH.

Sri  Pinarayi  Vijayan,  Chief  Minister  of  Kerala,  inaugurated Vivekananda  Institute  of  Human Excellence and National Integration at Thiruvananthapuram centre on 28 June, in the presence of many dignitaries. Click here for more details and photos.

The results obtained by the students of our schools and hostels at the Secondary (Class 10) and Higher Secondary (Class 12) Examinations, 2016, conducted by different education boards are given below.  (In all these figures, Star Marks means 75% or more marks, 1st Div. 60% or more marks, 2nd Div. 45% to 59% marks, and 3rd Div. less than 45% marks.)

Students of the Polytechnic College of Chennai Students’ Home obtained the following grades in the final examinations held by Tamil Nadu Board this year:

Porbandar centre held, in association with a few other organizations, a cancer detection and awareness camp on 5 June in which 135 people were examined by many renowned doctors.

Ranchi Morabadi centre conducted an Eye Care Programme from 23 May to 17 June in which eye check-up of 1136 children and 371 adults was done; 10 patients were operated upon for cataract.

On 12 June, Rajamahendravaram (Rajahmundry) centre conducted a free medical camp at Rampachodavaram, a place mostly inhabited by tribal people. A team of 15 doctors, including a few specialists, treated 802 patients.

On 3 June, Salem Ashrama felicitated 30 students of 15 Government schools in the rural areas of Salem district for their excellent performance in the class-10 examinations conducted by Tamil Nadu State Board of School Examination.

Nagpur centre took out a rally in Takiya area on 5 June, World Environment Day, to create awareness about cleanliness.  About 75 people, mostly children, took part in the rally.  As a part of the rally, the children enacted a street play.

Chennai Math conducted a three-day youth camp from 17 to 19 June in which 230 youths took part.  On the last day, the youths cleaned the area around Chennai Math and the nearby Sri Kapaleeshwarar Temple.

Hyderabad centre held a three-day personality development camp from 24 to 26 June in which about 200 girls participated. Click here to for details and photos

Vadodara centre held two seminars on values education for teachers on 16 and 18 June at Ahmedabad and Vadodara respectively. In all, 260 teachers participated in the seminars.

We  record  with  sorrow  the  passing  away  of  Swami  Tathagatanandaji  (Lakshminarayan Maharaj), Head of New York Vedanta Society, USA, at a hospital in New York on 25 June at 1.20 pm local time (25 June 10.50 pm Indian Standard Time).  He was 93 and had been suffering from kidney problem and other old-age ailments. Initiated by Swami Virajanandaji Maharaj, he joined the Order in 1955 at Saradapitha and had Sannyasa from Swami Madhavanandaji Maharaj in 1964. Besides his joining centre, he served at Deoghar Vidyapith and Chennai Students’ Home as an assistant.  He was appointed head of Baranagar Mission Ashrama in April 1975.  In February 1977 he was sent to Vedanta Society, New York, as an Assistant Minister, and was appointed head of that centre after the passing away of Swami Pavitranandaji Maharaj in November 1977.  The Swami authored several scholarly books and also contributed many articles to our journals.   His utter simplicity, open friendliness, informal manners and other noble qualities had endeared him to one and all.