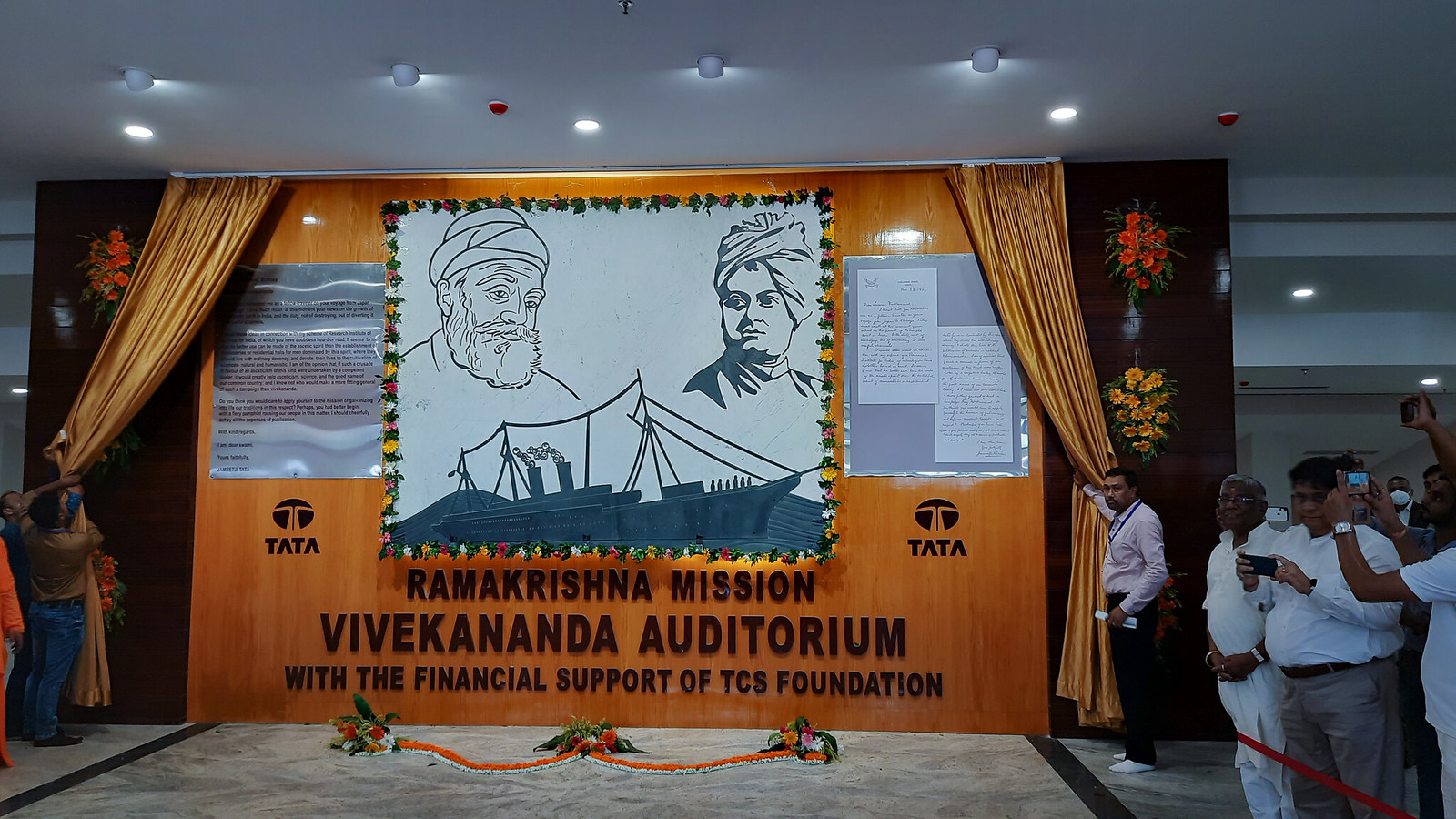 Revered President Maharaj will be visiting Kankurgachhi Math, Kolkata, from 3 to 10 June.

Swami Gautamananda ji will be visiting Mangaluru from 1 to 5 June, Thrissur and Kochi from 6 to 11 June, and Belagavi from 18 to 24 June.

Swami Prabhananda ji will be visiting Baghbazar centre, Kolkata, from 7 to 19 June.

Swami Suhitananda ji is scheduled to return to Belur Math on 8 June from Kathamrita Bhavan. He will be visiting Gol Park centre, Kolkata, from 15 to 25 June.

Swami Bhajanananda ji is at Belur Math.  He visited Mumbai from 22 to 25 May.

Swami Girishananda ji is now in Silchar and will be returning to Belur Math on 9 June.  He will be visiting Hyderabad from 11 to 13 June, Bardhaman from 15 to 19 June, and Mumbai from 24 June to 1 July. 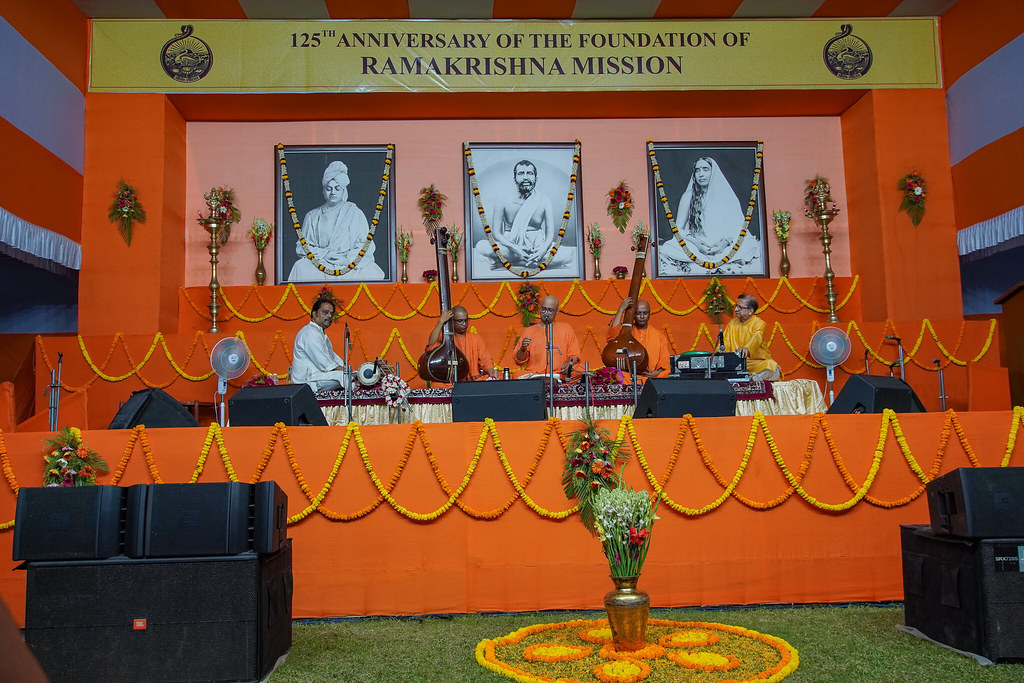 The Foundation Day and the 125th anniversary of the Ramakrishna Mission were celebrated at Belur Math on 1 May through a day-long programme.  A devotees’ convention was held in the morning.  In the public meeting held in the afternoon, Revered President Maharaj inaugurated the year-long 125th-anniversary celebrations.  The General Secretary presented the welcome address, and Swami Bhajananandaji, Swami Girishanandaji and others spoke in the meeting.  About 8000 people attended the programme

Following the taking over of Shri Ramakrishna Yuvak Mandal, Bhuj, by the Ramakrishna Math, a new branch centre of the Math has been started there.  The handing over ceremony was held on 29 May, Phalaharini Kali Puja day.  The address of the centre is “Ramakrishna Math, Prasadi Plot, Sanskar Nagar, Bhuj, Dist. Kutch, Gujarat 370001”, phone number: 94755 52533 and email id: <[email protected]>.  The ashrama was founded in 1969.

Barasat centre has launched a website with the address: www.rkmbarasat.org

The following centres celebrated the 125th anniversary of the Ramakrishna Mission by holding public meetings, cultural events and other programmes:

Swami Gautamanandaji inaugurated the diamond jubilee block of Swami Shivananda higher secondary school and a permanent exhibition on Indian culture at Coimbatore Mission centre on 1 May. 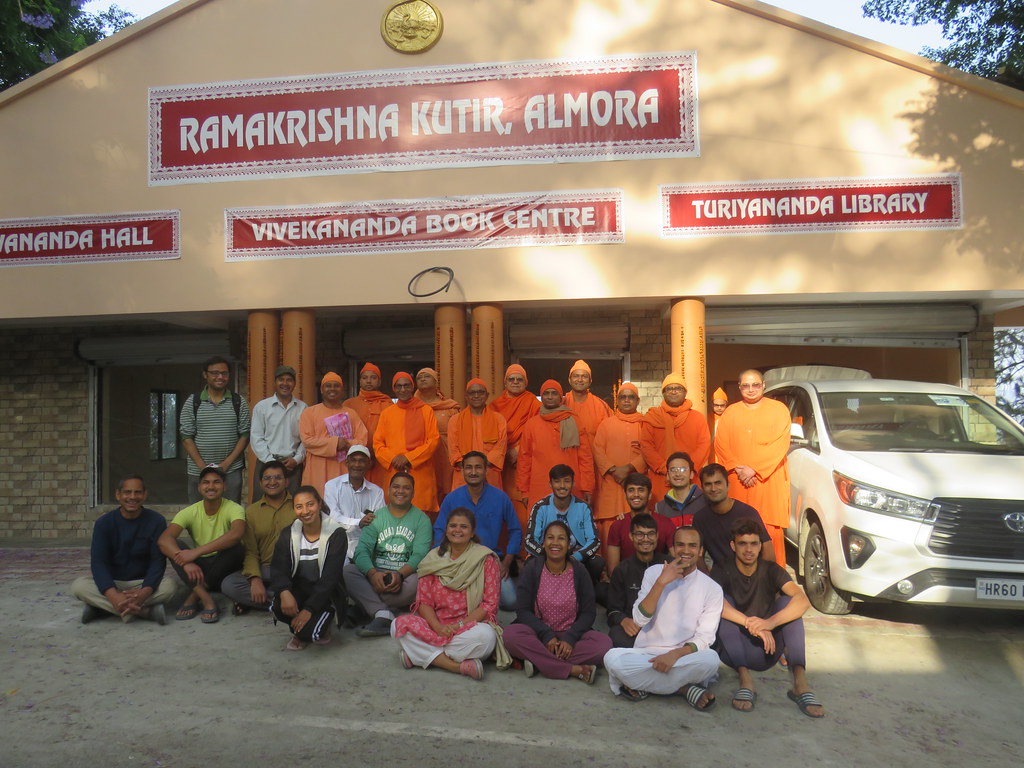 Swami Suhitanandaji inaugurated a kitchen and dining hall, a multipurpose hall, and an extension to monks’ quarters at Almora centre on 11, 12, and 17 May respectively. 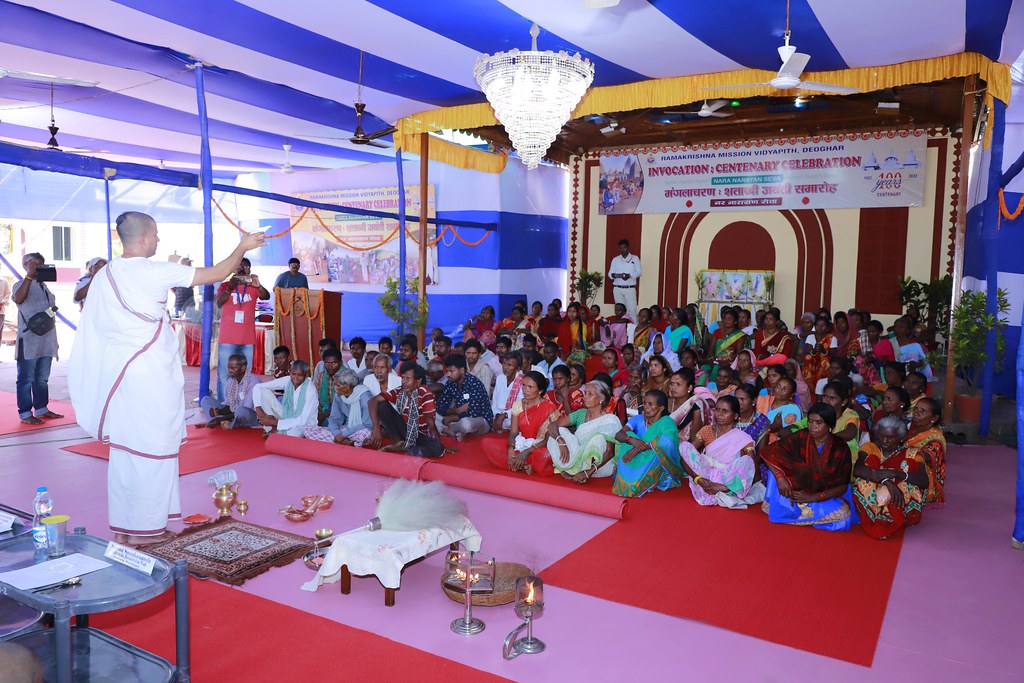 As part of its centenary celebration, Deoghar Vidyapith held special worship and Narayana Seva (feeding and giving gifts to poor people) on 16 May, Buddha Purnima.

Revered President Maharaj inaugurated the Vivekananda Auditorium at Viveka Tirtha (New Town, Kolkata) on 16 May.  About 300 monks and 700 lay devotees attended the programme.  The facade of the auditorium resembles that of the Art Institute of Chicago in which Swamiji addressed the World’s Parliament of Religions in 1893. 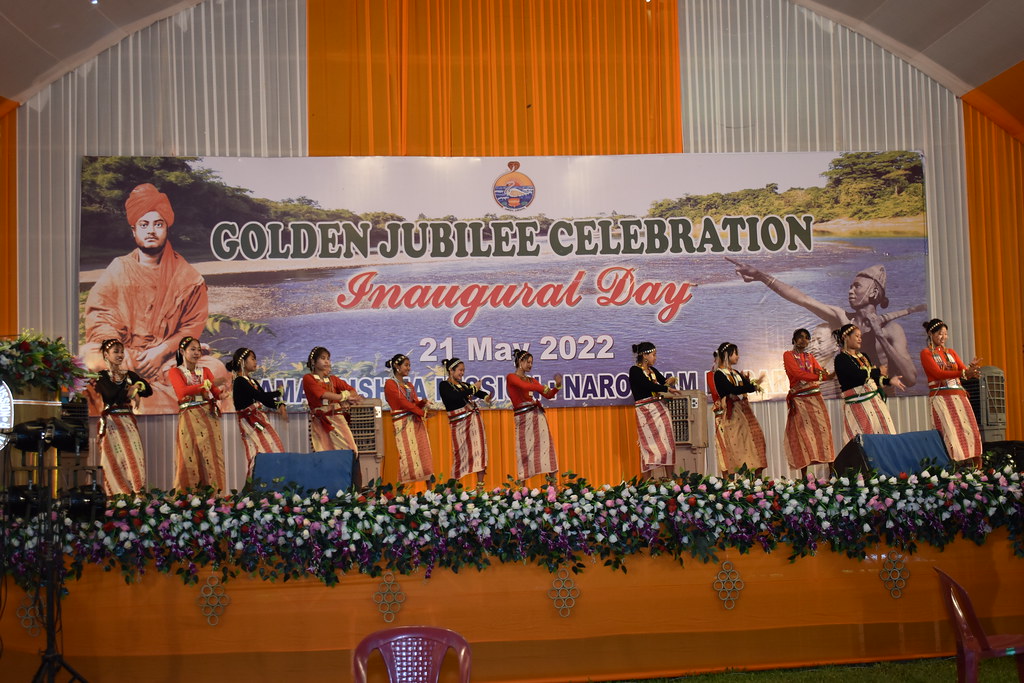 Narottam Nagar centre observed its golden jubilee with a series of celebrations from 18 to 23 May.  Swami Gautamanandaji, Union Home Minister Sri Amit Shah, Union Minister for Law and Justice Sri Kiren Rijiju, Chief Minister of Arunachal Pradesh Sri Pema Khandu, Deputy Chief Minister of Arunachal Pradesh Sri Chowna Mein, many other dignitaries and about 5000 people took part in the main event held on 21 May.  Sri Amit Shah unveiled a statue of Swami Vivekananda installed by the side of a new diversion road, named ‘Vivekananda Marg’, near the centre.  A video documentary and a commemorative volume were also released on the occasion.  The golden jubilee celebrations included a get-together of monks, a conference of Bhava Prachar Parishad ashramas, an alumni meet, a devotees’ convention and cultural programmes. 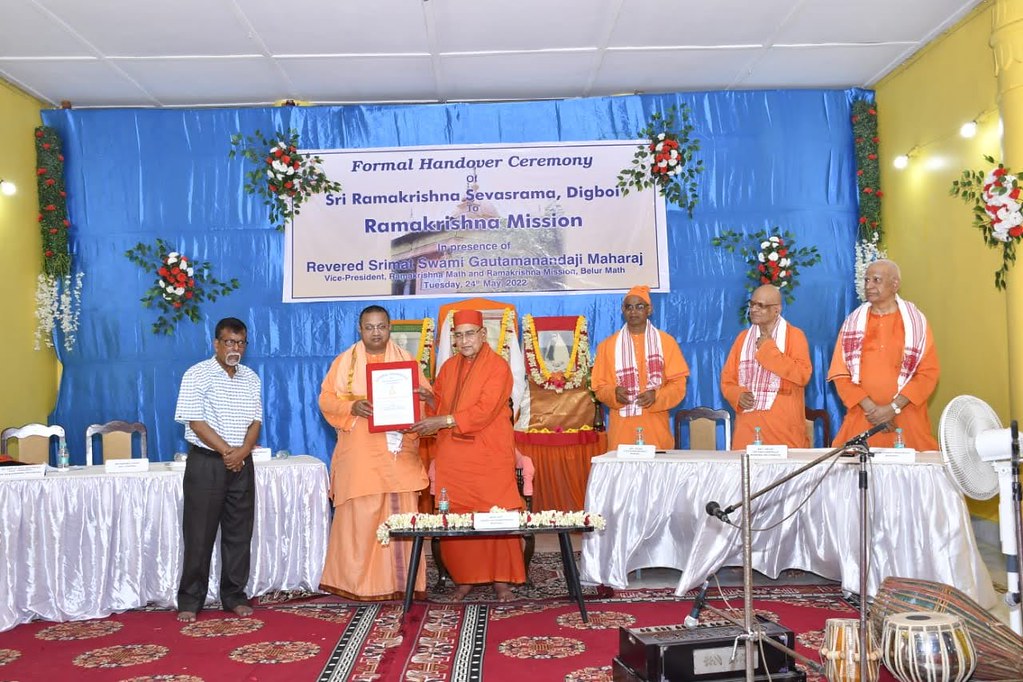 Special worship, a procession and a public meeting were held at Digboi centre on 24 May to mark the taking over of Sri Ramakrishna Sevashrama, Digboi, and starting of a branch of the Mission there.  Swami Gautamananda ji presided over the public meeting which was attended by about 30 monks and 1000 devotees.  The news of starting of the centre was announced in the October 2021 Bulletin.

Sarisha centre, as a part of its centenary celebration, conducted a three-day residential training camp from 28 to 30 May in which 86 youths took part.

The Residential College of Narendrapur Ashrama received the ‘Best College in Academic Excellence’ award from News 18 Bangla, a TV channel.  Sri Humayun Kabir, Minister of Technical Education, Training and Skill Development, Government of West Bengal, presented the award in a programme held in Kolkata on 20 May. 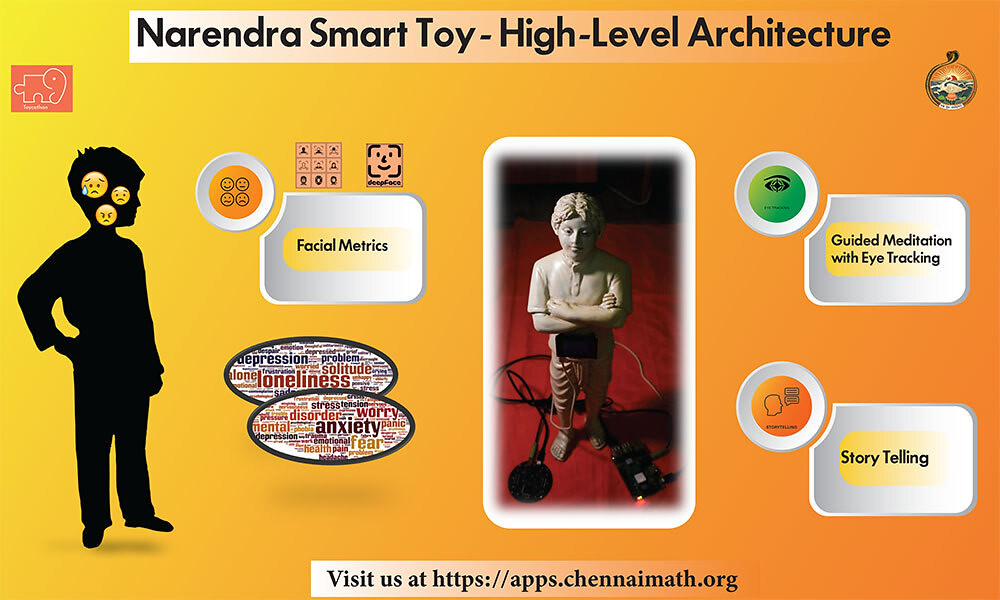 ‘Narendra Smart Toy’ developed by the media team of Chennai Math won a prize in Toycathon, a competition conducted by the Government of India to encourage the development of new toys and games.  The competition was held at the Noida Institute of Engineering & Technology, Noida, from 24 to 26 May.

Almora centre held cultural competitions in April in which 3000 students from 34 schools and colleges participated.  The winners were given prizes in a programme held at Government Inter College, Almora, on 17 May.  Further, a seminar on Swamiji was held at a university in Almora on 15 May which was attended by 200 students.

Basavanagudi centre, Bengaluru, conducted a seminar on “Swami Vivekananda and Indian Freedom Movement” on 13 and 14 May in which 400 students participated.

Chennai Math held a workshop on 28 May in which about 100 headmasters, principals and administrators of various schools and colleges of Tamil Nadu took part.

Cooch Behar Math held a convention on 15 May in which 178 youths and teachers participated.

Delhi centre conducted seven workshops on values education in online mode and one in offline mode, from 28 April to 24 May.  In all, 383 principals and teachers from different parts of India participated.

Madurai Math conducted a personality development camp on 21 May in which 104 students and 6 lecturers from a women’s college took part.

Nabadwip centre held a youths’ convention on 8 May which was attended by 108 youths.

Rajkot Math conducted a week-long residential youths’ camp from 5 to 11 May in which 68 youth delegates from different parts of Gujarat participated.

Ramanathapuram centre held a teachers’ orientation programme from 23 to 28 May in which 15 teachers took part.

Sarisha Ashrama held a youths’ convention on 1 May in which about 200 youths participated.

Thanjavur Math conducted an essay-writing competition in Kumbakonam in which 1225 students from 44 schools took part.  The winners of the competition were given prizes on 4 May.

Visakhapatnam centre held a youths’ convention on 22 May in which 120 youths took part.

Basavanagudi, Bengaluru: A blood donation camp on 15 May in which 91 people donated blood.

Coimbatore Mission: Four medical camps (two general camps, one cardiology camp and one orthopaedics camp) in rural areas of Coimbatore district on 1 May in which a total of 203 patients were treated.

Delhi: Eye operations on 23 patients and distribution of spectacles to 12 patients in April.

Gurap: An eye camp on 25 April in which 32 patients were checked and 6 were operated on.

Kamarpukur: 331 eye patients were checked, 101 were operated on and 77 were given spectacles in May.

Kanchipuram: Three medical camps, two in Samanthipuram and Keezh Visharam villages and one in the ashrama, on 24 April and 1 and 22 May in which a total of 309 patients were treated.

Khetri: 109 eye patients were screened and 47 were operated on in April.

Krishna Nagar:  An eye camp on 6 May in which 34 patients were treated.

Lucknow: 6195 eye patients were checked and 365 were operated on and given spectacles in April.

Madurai: An eye camp on 15 May: 141 patients were screened, 66 were operated on and 17 were given spectacles.

Mekhliganj: A blood donation camp on 15 May in which 46 people donated blood.

Naora: A health-awareness-cum-check-up camp on 22 May in which about 200 patients were treated.

Phoenix, South Africa: A medical camp at the Verulam Day and Frail Care Centre, Durban, on 15 May in which 13 medical professionals from the fields of medicine, dentistry, optometry, audiology, physiotherapy and podiatry offered 352 consultations to the residents.

Porbandar: An eye camp on 13 May: 24 patients were treated and subsequently 10 were operated on for cataract.

Rajkot: (i) A blood donation camp on 14 May in which 70 people donated blood, and (ii) Two eye camps on 22 May, at the centre and elsewhere in Rajkot, in which 125 eye patients were checked and 63 surgeries were performed.

Ranchi Morabadi: Eye camps in April and May in which a total of 1549 patients were checked and 142 were given spectacles.

Salem: A medical camp on 15 May attended by 9 doctors and 117 patients.

Thanjavur: Three medical camps in May through which more than 80 people benefitted. We record with sorrow the passing away of Swami Omanandaji (Mahadev Maharaj) at Seva Pratishthan, Kolkata, on 30 May at 11.15 pm.  He was 92 and had been suffering from skin cancer and old-age ailments for several years.  Initiated by Swami Shankaranandaji Maharaj, he joined the order in 1951 at Kamarpukur centre and received sannyasa diksha from his guru in 1960.  He served the order at Belur Math and in Kamarpukur, Taki, Rangoon Sevashrama (formerly our branch centre), Jalpaiguri, Baghbazar, Cossipore, Varanasi Advaita Ashrama, Jayrambati and Ranchi Morabadi centres.  Since August 2005, he had been living a retired life, staying mainly at Belur Math and Kamarpukur centre.  The swami was known for his characteristic smile and culinary skills.  Austere and sociable by nature, he used to spend long hours in japa.