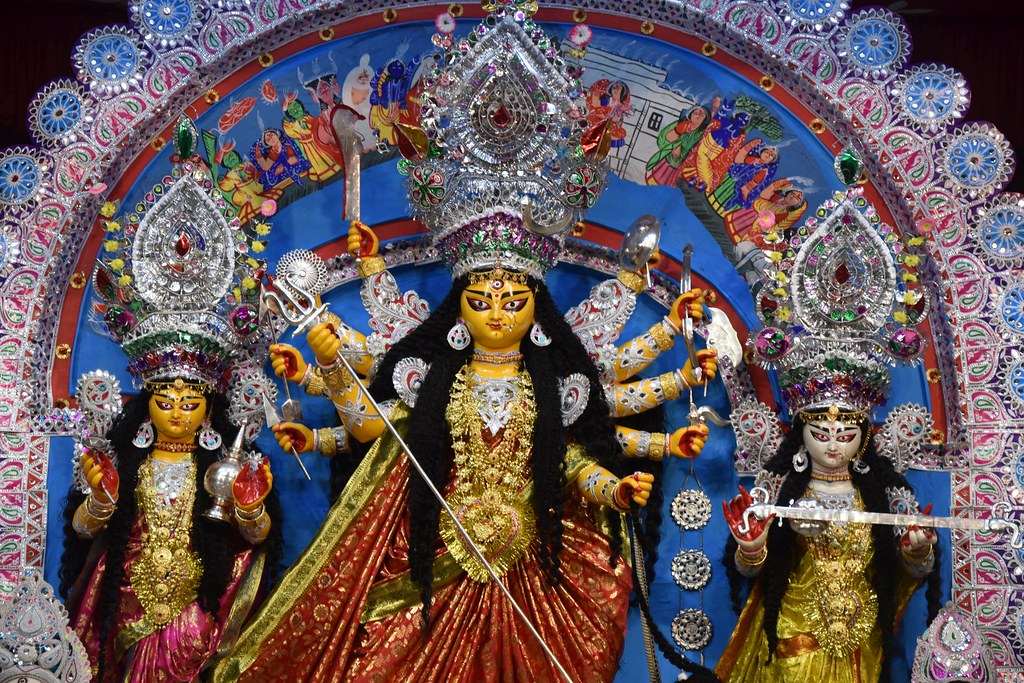 Revered President Maharaj will be visiting Kamarpukur and Jayrambati from 1 to 17 November.

Swami Vagishanandaji will visit Silchar, Hailakandi and Karimganj from 7 to 19 November.

Swami Gautamanandaji is scheduled to visit Aurangabad and Pune from 1 to 7 November, Delhi and Vrindaban from 8 to 15 November, and the UAE, Zambia and South Africa from 20 November to 8 December.

Swami Prabhanandaji will return to Belur Math on 13 November after his visit to Baghbazar, Kolkata.

Swami Shivamayanandaji is scheduled to return to Kankurgachhi Math on 2 November from Barasat.  He will visit Gourhati and Singur on 8 and 9 November, Shillong and Shella from 12 to 19 November, Asansol from 25 to 29 November, and Coimbatore from 30 November to 4 December.

Swami Suhitanandaji will return to Belur Math on 9 November after his visit to Nabadwip and Gurap.  He will then be visiting Singapore, Fiji, New Zealand and Australia from 16 November to 13 December.

Durga Puja was celebrated at Belur Math from 5 to 8 October with due solemnity and joy.   Although there were short spells of rain, the weather was fine on all four days.  Lakhs of devotees attended the Puja to receive the blessings of the Divine Mother.  Kumari Puja and, after a short interval, Sandhi Puja were performed on 6 October and both were attended by thousands of devotees.  Cooked prasad was served to nearly 67,000 devotees on the Ashtami day and, in total, to about one and a half lakh devotees during the four days.

Almora: Four seminars in Almora, Nainital and Bhimtal from 28 to 30 September.  In all, about 2000 school and college students, professors and teachers took part in the seminars.

Belagavi (Belgaum): A youths’ convention on 27 September in which 950 college students took part.

Chandipur: A youths’ convention on 29 September attended by 100 students and teachers.

Coimbatore Mission: Cultural competitions at 10 schools and colleges in and around Coimbatore from 20 September to 24 October.  In all, 1154 students took part in the competitions.  At all the venues, the competitions were followed by a talk, an awards ceremony and a skit.

Jamshedpur: A cultural programme on 27 September which was attended by 400 people.

Kadapa: Vivekananda Ratha (carriage) passed through Kadapa, Anantapur and Kurnool districts from 7 September to 5 October.  In these districts, the Ratha visited about 150 educational institutions and other public places where public meetings and processions were held.

Malda: A youths’ convention on 10 September attended by 289 youths from 18 educational institutions.

Naora: A public meeting on 8 September attended by 300 students.

Ponnampet: Two public meetings on 11 and 27 September.  The latter meeting was addressed by Swami Gautamanandaji.  About 600 people took part in the programmes in all.

Rajkot: (i) A total of 125 programmes in different educational institutions in Rajkot from 11 to 27 September.  Each programme consisted of talks, recitation and a quiz competition.  In all, 23,224 students participated in the programmes. (ii) A youths’ convention on 15 October attended by 650 youths.

Salem: A drama at a school auditorium in the city on 14 October which was watched by 2100 students from 17 schools.

Silchar: Three conventions for devotees, school students and college students from 29 September to 1 October which were attended by 650 devotees, and 1000 students and 112 teachers from a number of educational institutions.

Varanasi Home of Service: (i) Cultural competitions in which about 70,000 students took part.  (ii) Public meetings on 11 and 27 September.

Durban, South Africa: A Vedanta retreat in Dundee on 18 August, a devotees’ convention at the centre on 24 August, and a special talk at Ladysmith sub-centre on 11 September.  In all, 270 people attended the programmes.

Narainpur centre held a sports meet from 12 to 16 October in which 1500 students from different parts of Chhattisgarh participated.  Ms Anusuiya Uikey, Governor of Chhattisgarh, was the chief guest at the closing ceremony of the event.

The University Grants Commission (UGC) has selected RKMVERI (deemed university) and the colleges of teacher education of Coimbatore Mission Vidyalaya and Saradapitha centres as Mentor Institutions for helping other higher education institutions to improve their quality and achieve NAAC accreditation.  These three institutions were selected by virtue of the excellent grade points they had scored in their NAAC assessments.

In addition to the above, the Government of Jharkhand has nominated RKMVERI as a Mentor Institute for all the non-accredited higher education institutions in Jharkhand to help them excel in NAAC accreditation.

Delhi centre conducted 24 values education workshops in 13 towns and cities in different parts of India between 30 August and 28 September.  A total of 1754 teachers and 65 principals attended the  workshops.

Vadodara centre conducted two values education programmes on its campus and another 44 programmes at an equal number of schools in six districts in September.  In all, 11,607 students participated in these programmes.

Ootacamund (Ooty) centre conducted a district-level sports competition from 11 to 24 October in which 700 students from 30 schools participated in throwball, volleyball, football and kho kho events.

Bagda Math held values education programmes in 11 schools of Purulia district from 6 to 26 September.  In all, about 2067 students and 138 teachers attended these programmes.

Delhi centre conducted 13 values education workshops in 5 towns and cities in Rajasthan and Madhya Pradesh between 23 September and 18 October.  A total of 752 teachers attended the workshops.

Gadadhar Ashrama held a values education programme on 19 October which was attended by 60 students.

Madurai centre conducted a values education programme at a school in Madurai on 15 October and another similar programme at the centre on 19 October.  In all, about 1000 students attended the programmes.

Jaipur centre held a cleanliness drive in its neighbourhood on 2 October.

Swami Vivekananda College of Fiji Ashrama celebrated its platinum jubilee from 10 to 13 September through seminars and debate competitions.  Also, Vivekananda Technical Centre of the Ashrama held its annual graduation ceremony on 12 September which was graced by Ms Rosy Akbar, Education Minister, Fijian Government.

Swami Nirgunananda (Narottam Maharaj) passed away at Belur Math on 9 October at 4 am due to cardiac arrest.  He was 80 and had been suffering from diabetes, hypertension and cardiac problems for several years.  Initiated by Swami Omkaranandaji, he joined the order in 1971 at Belur Math and received sannyasa diksha from Swami Vireshwaranandaji Maharaj in 1981.  He served the order at the headquarters and Chennai Vidyapith, Dehradun, Kankhal, Sarisha, Seva Pratishthan and Katihar centres.  He was loved by one and all for his simple and amicable nature.

Swami Gatasangananda (Karunamay) expired at Seva Pratishthan, Kolkata, on 21 October at 8.45 pm.  He was 62 and had been suffering from acute myeloid leukaemia (a type of blood cancer) for some months.  Initiated by Swami Vireshwaranandaji Maharaj, he joined the order in 1982 at Saradapitha centre and received sannyasa diksha from Swami Bhuteshanandaji Maharaj in 1992.  He served at the headquarters’ vehicle department and at Seva Pratishthan, Jammu and Barasat centres.  He also participated in Uttarkashi rehabilitation work in 1992 and later on supervised the reconstruction work of our kutirs (monks’ cottages) in Uttarkashi from 2014 to 2017.  The Swami was amiable by nature.